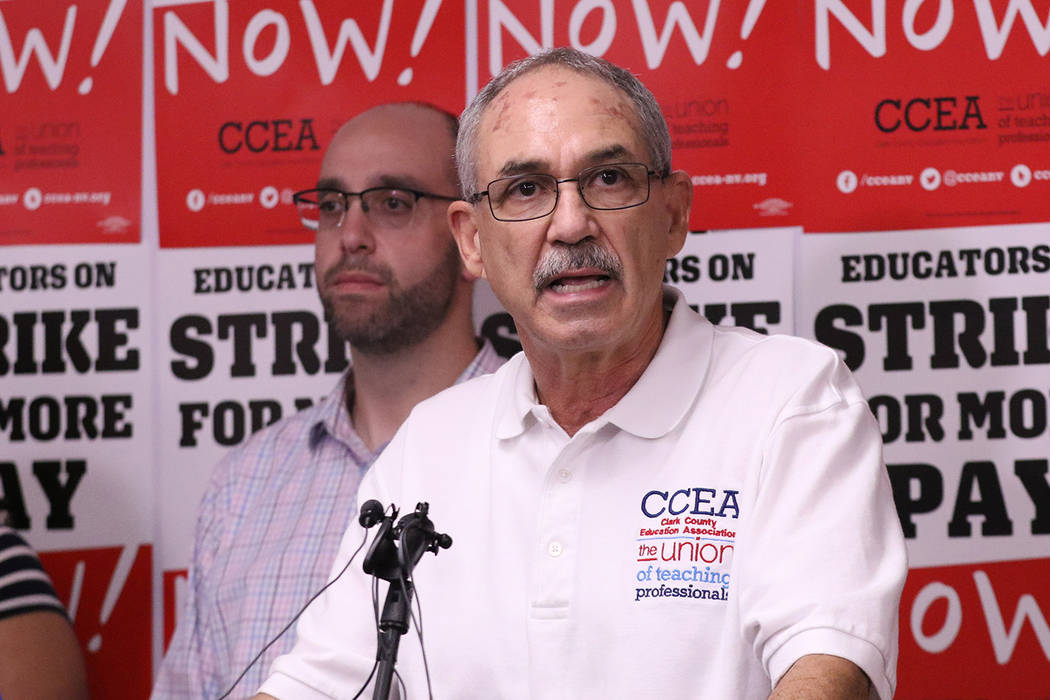 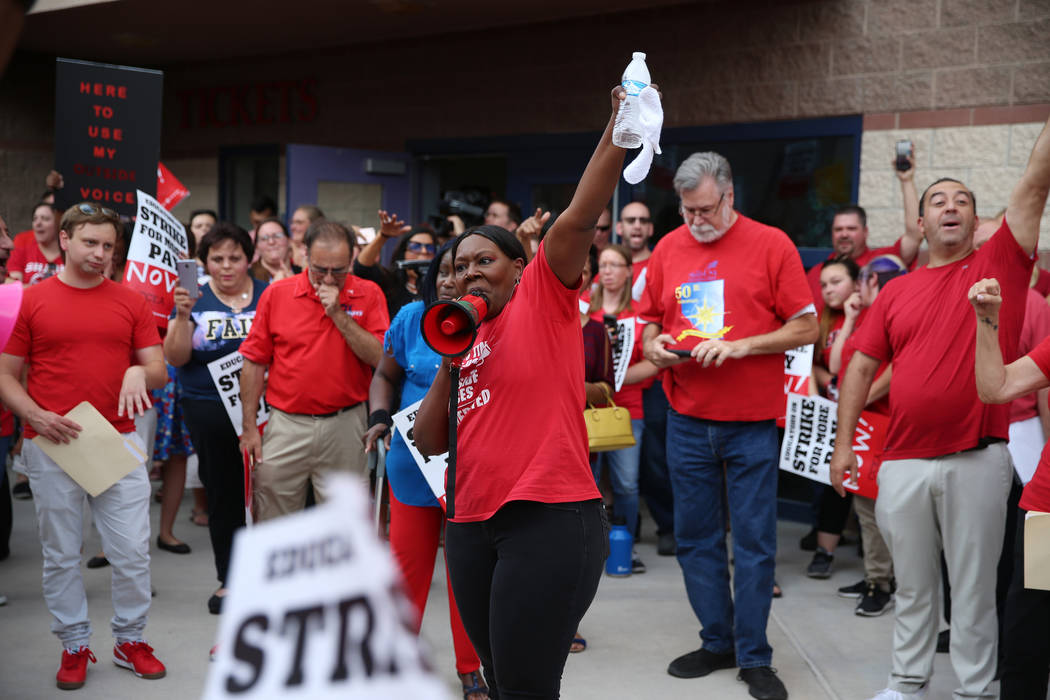 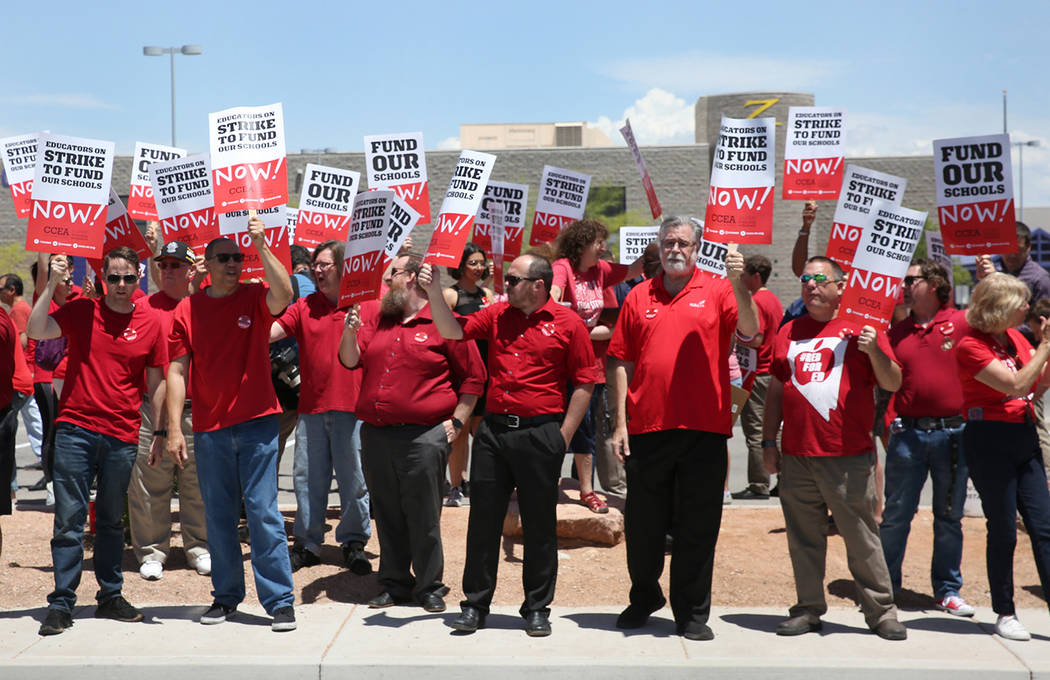 Members and supporters of the Clark County Education Association protest in front of Durango High School on May 31.

The Clark County teachers union is increasing member dues to fund a multi-million dollar campaign that would ask voters to approve a tax increase to provide at least $1 billion more annually for public education in Nevada.

The campaign aims to create two companion initiative petitions to raise taxes, although the Clark County Education Association has not yet settled on which taxes it would seek to increase. Initiative petitions require signatures of 10 percent of the voters who participated in the last general election in order to enact a ballot measure.

At a membership meeting on Saturday, educators voted to support the initiative, which will increase biweekly dues by $9 and generate an estimated $2.2 million from the 10,400 members, according to a campaign budget.

“This is clearly going to make sure there’s a discussion in the 2021 (legislative) session around funding education and how much and where’s the source,” said John Vellardita, executive director of the union.

He did not comment on how many people attended the membership meeting but said the plan was approved by 87 percent of those who attended.

“We believe that there (are) revenue streams out there that can be increased to the tune of generating $1 billion more for public education a year on top of what we’re currently funding,” Vellardita said. “We believe that whatever tax that may be that we land on, it’s got to be supported by the public and the public has to be assured that it’s going to the schools.”

The “Strategic Horizons” campaign would spend roughly $2 million from 2020 to 2021 — money that will be used to collect signatures for each petition, launch public campaigns, conduct polling and fend off any legal challenges, among other expenses.

Petitions are due in November 2020 and require 97,598 signatures collected in equal amounts in each of the state’s four petition districts. The measure would then go before the Legislature in 2021, where lawmakers have 40 days to either pass it into law or take no action. If lawmakers fail to enact the measure, it would go to the ballot in November 2022 for voters to decide.

Lawmakers also have the option of placing a competing measure on the 2022 ballot, alongside the union’s petition. If that happens, the measure that gets the most votes becomes law.

If the initiatives end up on the ballot, the second phase of the union’s plan would kick in. It calls for building a coalition to raise up to $10 million to lobby voters, starting with $3 million in “seed money” from union dues.

From June 2021 through November of 2022, the plan would spend millions of funding on field research, voter registration operations, advertisements and more.

“We’re not going to do it alone,” Vellardita said. “We’ve already been in discussion with others.”

The $1 billion goal is from an analysis from the Applied Analysis firm, which pulled from a previous 2018 Nevada school finance study to conclude Nevada would need more than $1 billion to adequately fund education.

The union pushed hard for more funding in this year’s legislative session in order to pay for educator raises, yet it didn’t throw its support behind the Fund Our Future coalition that urged lawmakers to enact adequate funding.

Vellardita said the union didn’t join that effort because it was clear that the governor was not going to introduce any new revenue, and the union wanted to wait for the unveiling of the state’s new funding plan.

A new Pupil-Centered Funding Plan passed this year began work on restructuring the state’s 52-year-old funding formula but does not offer the funding that education advocates consider adequate.

“You have to be effective in moving politics in this state and we believe we are,” Vellardita said. “We now believe that the state has been set to take it to another level.”

Educate Nevada Now, the education advocacy group that’s part of the Fund Our Future coalition, said in a statement that it is good to see other groups taking action.

“ENN and the statewide Fund Our Future NV coalition it belongs to have spent the last two years and the most recent legislative session advocating for adequate funds for all Nevada students and educators,” the statement said. “It’s good to see other organizations are now realizing the urgency and making it a priority as well.”

Nevada voters previously rejected an “Education Initiative” ballot question in 2014 that called for a 2 percent “margin tax” on the gross revenue of businesses with revenue of more than $1 million annually. The tax would have been calculated either by taxation of 70 percent of total revenue or taxation of total revenue minus compensation to owners and employers or costs related to goods sold, but not both.

The revenue from that tax would have been given to the state’s Distributive School Account, the main fund for education.

At the time, Gov. Brian Sandoval said the tax would deliver a “fatal blow” to Nevada businesses and would hurt the state’s economic recovery. The measures failed with 78.7 percent of 545,215 voters opposed.