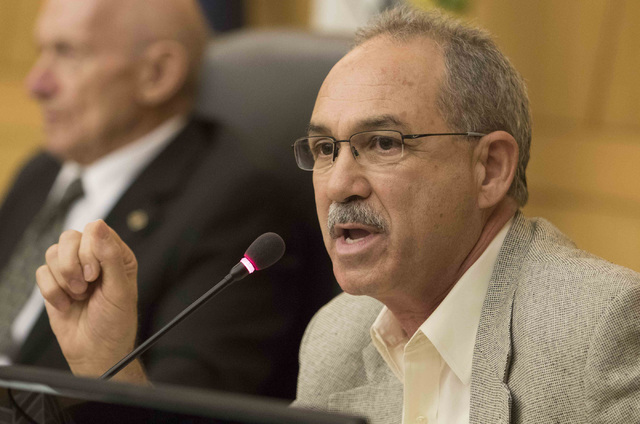 The district says the estimated $52 million deal could cause another major budget shortfall.

Teachers will move a step in the salary schedule effective June 1, 2018. The district’s contributions to health care through the Teachers Health Trust also will increase from roughly $538 to $583 a month. That increase will be retroactive to July 1, 2017.

The package will cost an estimated $13 million this fiscal year and an additional $38.5 million the next, according to the district. Officials will consult with counsel and School Board trustees to determine the next course of action, but the district did not say whether it would appeal the decision.

John Vellardita, executive director of the Clark County Education Association, said that while he’s glad the union prevailed in the decision, labor relations must be fixed. He said the arbitration session, which began in June 2017 and was the longest the union has had, cost the union half a million dollars.

The arbitrator for the decision argued that the district could pay the award through $18 million left in its unassigned ending fund balance, a kind of reserve of money, for fiscal 2018.

Board President Deanna Wright said it’s a disappointment that the district’s unassigned ending fund balance is once again not protected from such rulings.

“The incoming money is not there to support this,” she said. “If we take it from the ending fund balance or we have to make more cuts or a combination, it’s a lose-lose, meaning that it’s not like we just have this pot of money.”

The district said in a statement that the arbitration decision could create another major shortfall. For this year, trustees may have to decide whether to dip into the unassigned ending fund balance or make cuts to cover the $13 million. They also will have to figure out where to find the money in the next budget, for 2018-19.

Though the district will receive an extra $34 million for next year, that money must cover all increasing expenses for the district, including school openings, special education programs and other employee contracts, according to the statement.

The School Board will discuss next year’s tentative budget Wednesday.

The move could mean the revival of the embattled Teachers Health Trust, which faces two lawsuits over a breach of fiduciary duty and unpaid medical claims. The School Board also has received a litany of complaints about health insurance and the trust, with blame placed either on the district or on the trust itself.

But Vellardita said the union proved that the district never increased its contributions, aside from a one-time increase in 2016, and that the trust was on the verge of going out of business as a result.

“With this additional money coming in, you better believe that there will be changes that are needed for educators in their family’s health care,” he said. “We’re going to be on track to accomplish that.”

The district has stated that the union has chosen to negotiate available funds to go toward salaries instead of health care contributions. In arbitration, it pushed for a switch in insurance.

But arbitrator Mario Bognanno argued that the trust improved in lag time paying claims and in its number of claims paid.

“The (trust) is making a genuine effort to regain financial stability,” he said.

Moving forward, the Clark County Education Association will call on the Legislature to create a funding stream dedicated solely for salaries. A bill in the last legislative session that would have created one didn’t pass.

“Teachers do not need to go year to year at the start of the school year with a degree of uncertainty and anxiety as to whether or not they’re going to get a pay raise or whether they’re going to have decent benefits,” Vellardita said.