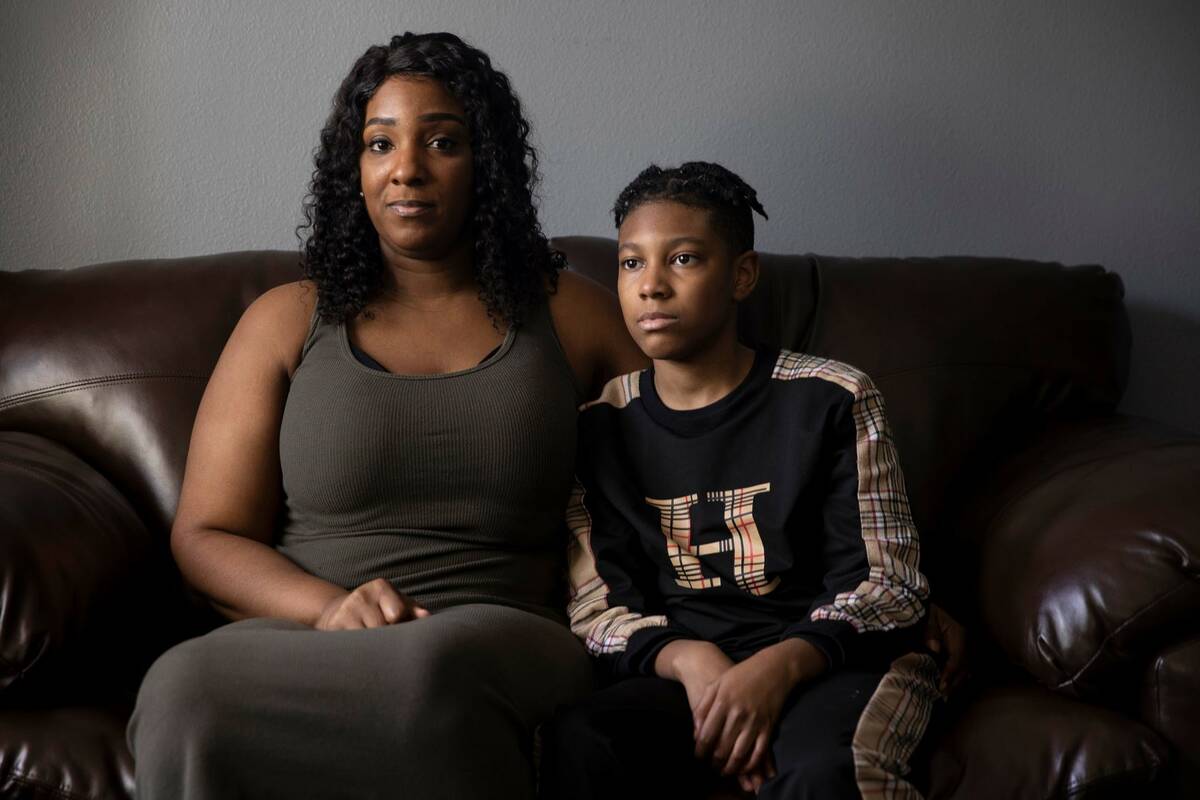 Amir Jackson said he was waiting to get on the school bus outside Lawrence Junior High School on Aug. 25 when a much bigger kid approached.

“He comes to our bus and, for some reason, he starts picking on me and saying stuff about my clothes and how I dress,” the boy said. “I said stuff back to him.”

Amir, 11 at the time, said the bigger kid threatened to sexually assault him before everyone got on the bus. Moments later, Amir said, he was attacked.

“I sat down, and he just started randomly beating on me,” Amir recalled. “He kept hitting me and hitting me. I went unconscious for like a split second. All of a sudden, the bus driver started pulling him away from me, and then my friend was saying, ‘Amir, your nose is bleeding.’”

Amir, now 12, recounted the story shortly after the Clark County School District’s recent announcement that it was taking a new approach to combating violence on school campuses. The district said it is implementing new disciplinary actions, including potential expulsion for students who engage in fighting, and a single point of entry for schools.

In announcing the measures, the district said it had seen over 1,000 logged citations and arrests since January and over 3,000 assaults, battery cases and fights since the start of the school year.

“We know that our kids are struggling because of the stress, anxieties and isolation of the pandemic, but violence is not and will never be the answer,” Superintendent Jesus Jara said. “Should students and adults resort to violence on our campus, we will remove them and hold them accountable according to our discipline code of conduct.”

On Friday, Las Vegas police announced that a 16-year-old student was arrested on attempted murder and sexual assault charges in an attack on a teacher at Eldorado High School.

Amir’s mother, 38-year-old Jasmen Jackson, said the stricter approach to school violence is needed. She claims that after her son was assaulted, the school’s administrators did not call the police and that law enforcement got involved only after she called them from the school’s campus the following day.

The woman also said that she first learned of the assault from Amir. She went to the school that afternoon and found her son covered in blood. She claims administrators appeared to be “brushing it off like it was just another fight.”

She said she then encountered the other boy on campus and briefly exchanged words with him about the assault before taking her son to the emergency room. Her son had suffered a broken nose that required surgery.

Jackson said she went to a Metropolitan Police Department substation that evening to file a report, only to be told that the report should be filed with school police. The next morning, Jackson returned to the school and made the call.

“The officer told me the police should have been called the day of the incident,” she said.

Jackson said she told administrators that she wanted assurances that the other boy and her son would have no further contact, but they could not guarantee that and would not provide information about any disciplinary action taken. She then asked if she could transfer her child to a different school in the district.

“They tell me if I want to take him out of school I have the right to do that, but I’m responsible for his transportation,” she said.

Jackson ultimately took Amir out of school and put him in online home-schooling. More than seven months later, she said she has not been able to get a copy of the police report she originally filed, despite going to the school district police office to do so. She also has asked for a copy of any video depicting the assault on the bus that day but has received no response.

The mother said she was contacted in October by a victim-witness advocate at the Clark County district attorney’s office who told her that the other boy was prosecuted on a charge of battery with substantial bodily harm. No one called Amir to testify in court proceedings, and Jackson said no one told her what the Las Vegas Review-Journal subsequently learned: The boy who assaulted Amir has been put on probation in Juvenile Court, and the case is considered closed.

“No information,” she said. “The school tells me, well, they are doing their investigation and the police have a video. I said, ‘Can I see the video?’ ‘No, it’s evidence.’”

The school district would not answer specific questions about what happened to Amir or how administrators responded. The Review-Journal asked the school district communications office about details of the case and received the following response in an email:

“CCSD investigates allegations according to District policies and procedures. Student discipline is handled in line with the student code of conduct. The District can not provide information on specific students due to federal privacy law.”

Dr. Ronald Stephens, executive director of the National School Safety Center, said schools are “going through a challenging period” due to school closures and distance learning caused by the COVID-19 pandemic. He said addressing school violence is a constant balancing act for administrators, who face the responsibility of supporting kids while enforcing discipline for what he described as the “small number of students who are disruptors.”

“When I deal with the best administrators, they have clear behavior expectations,” he said. “They consistently enforce the student code of conduct, and they do everything they can to be fair. The three F’s of administration: Be firm. Be friendly. Be fair. And do it in that order.”

Stephens said administrators also need to be proactive in dealing with students who videotape assaults and post them online. The broadcasting of those assaults online and in the media ultimately causes a victim to be “victimized again and again and again.”

When an assault happens on campus, he said, there is little debate about whether the police should be called.

Jackson said she has retained two attorneys, Harry Peetris and Eric Blank, to find out the facts. Peetris and Blank said that, in their opinion, the school district needs to be more transparent about crimes on campus.

“Yes, we have a large school district,” Blank said. “We all understand that. But that is not the problem of any parent who sends their child there.”

Peetris said he wrote the school district months ago requesting the police report and video. They still haven’t received it.

“The administration can certainly do better,” Peetris said. “They certainly have our tax dollars, and they are entrusted with children.”