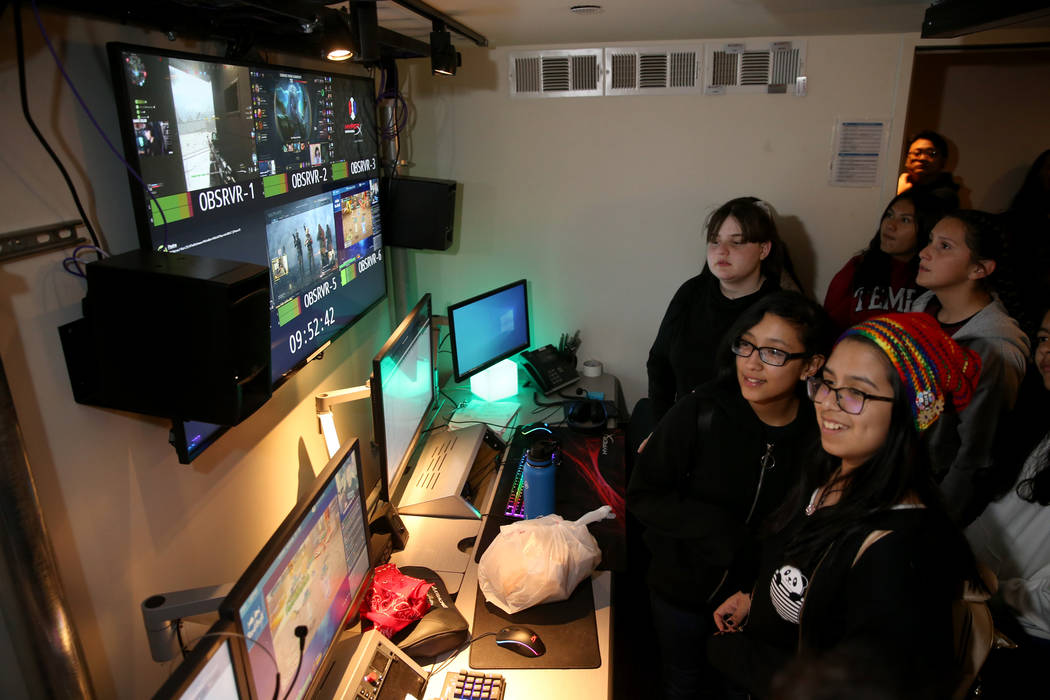 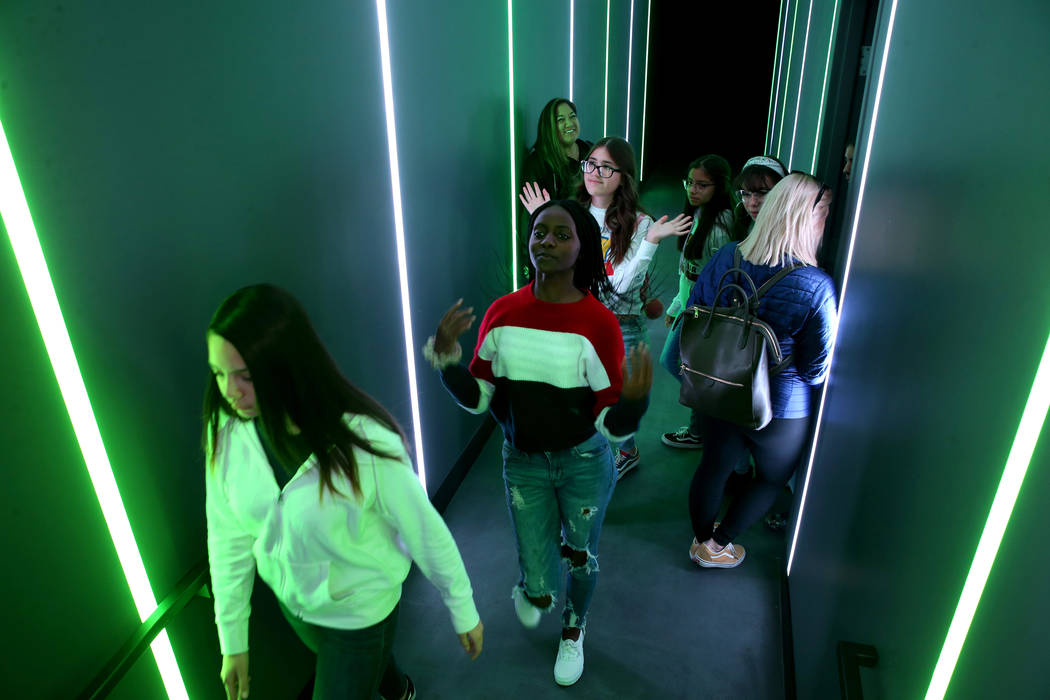 Eighth graders, including from left, Morgan Miller, Natalia Muriithi and Valeria Falcon, all 13, walk through the HyperX Hype Tunnel during Battle Born Girls Innovate educational program at HyperX Esports Arena at Luxor in Las Vegas Wednesday, Oct. 30, 2019. The program's mission is to introduce young women to Southern Nevada’s science, technology, engineering, arts, and math (STEAM) careers, demystify success in these fields and provide an outlet for them to engage with women role models and leaders. (K.M. Cannon/Las Vegas Review-Journal) @KMCannonPhoto 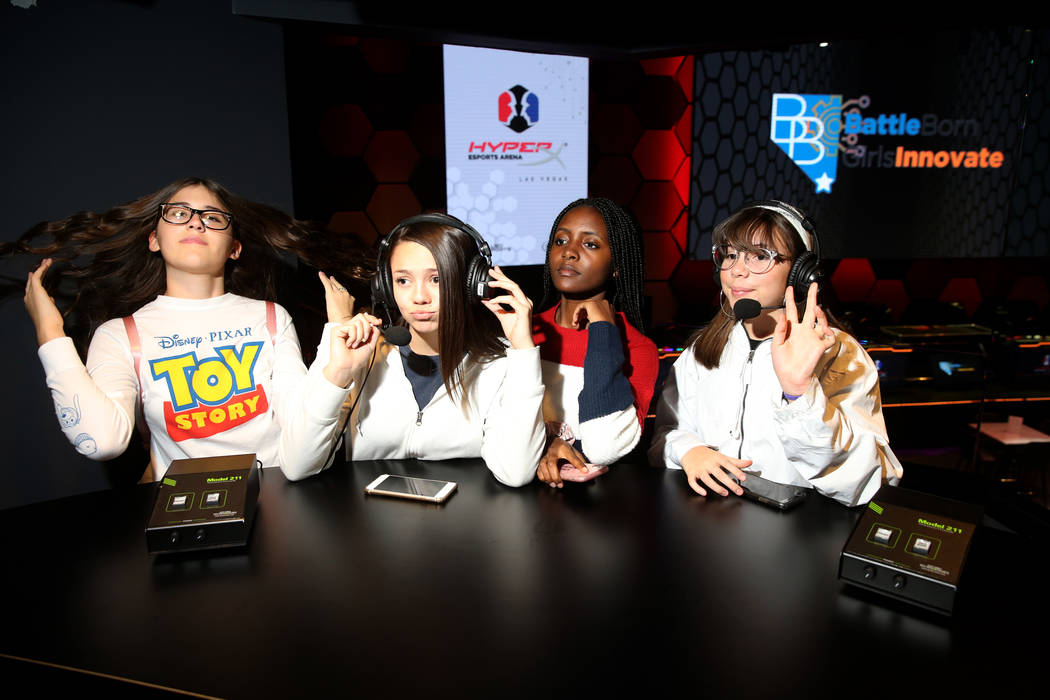 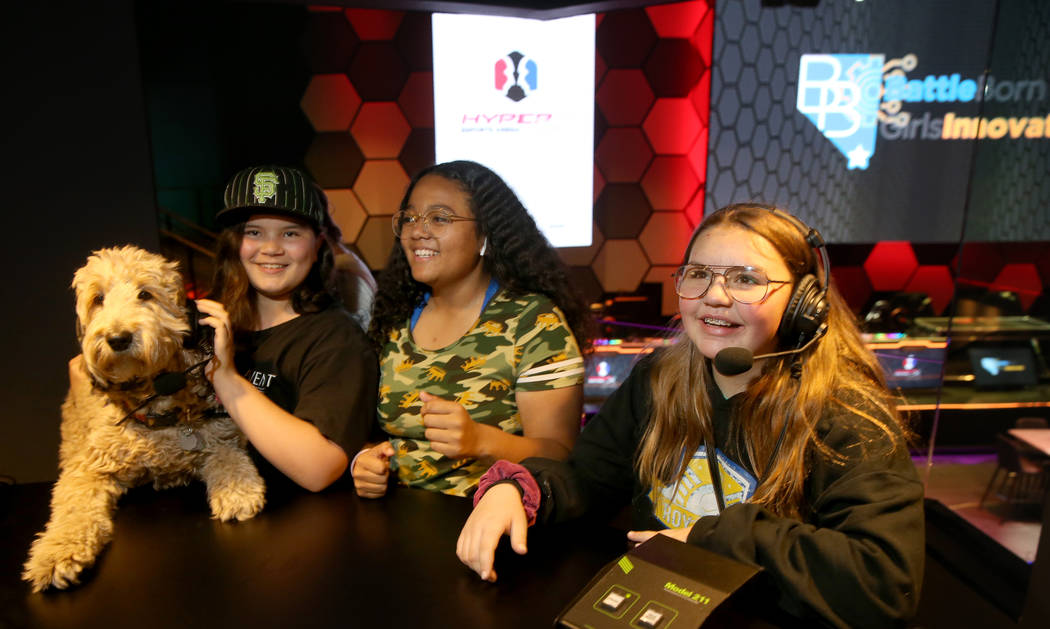 Eighth graders, from left, Sydney Ferguson, with her dog Fluffy, Jaelina Richardson and Rebeka Budde, all 13, pose in the broadcast booth during Battle Born Girls Innovate educational program at HyperX Esports Arena at Luxor in Las Vegas Wednesday, Oct. 30, 2019. The program's mission is to introduce young women to Southern NevadaÕs science, technology, engineering, arts, and math (STEAM) careers, demystify success in these fields and provide an outlet for them to engage with women role models and leaders. (K.M. Cannon/Las Vegas Review-Journal) @KMCannonPhoto 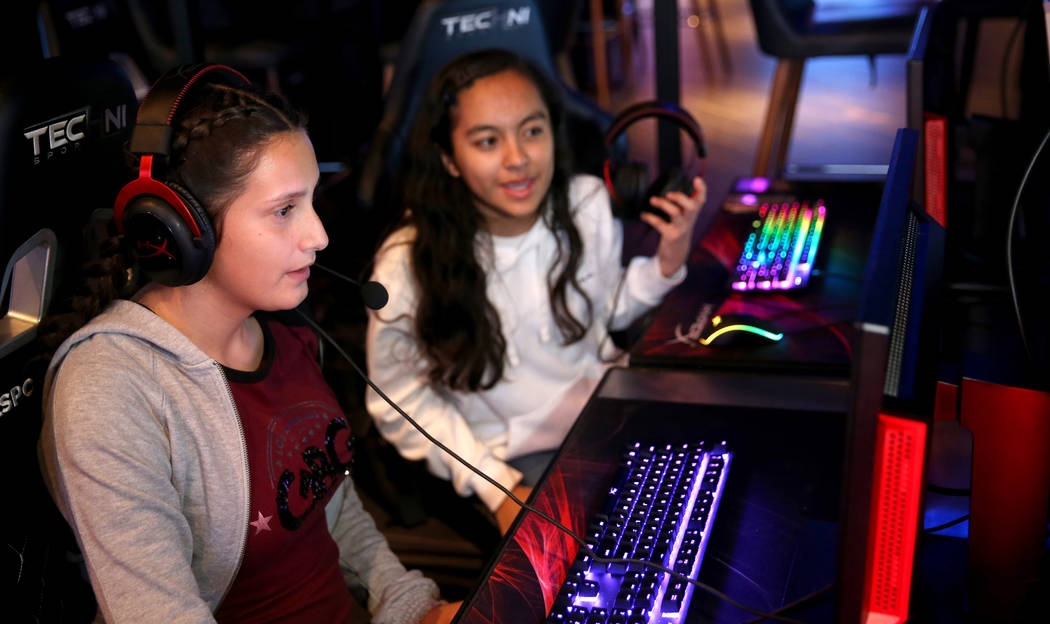 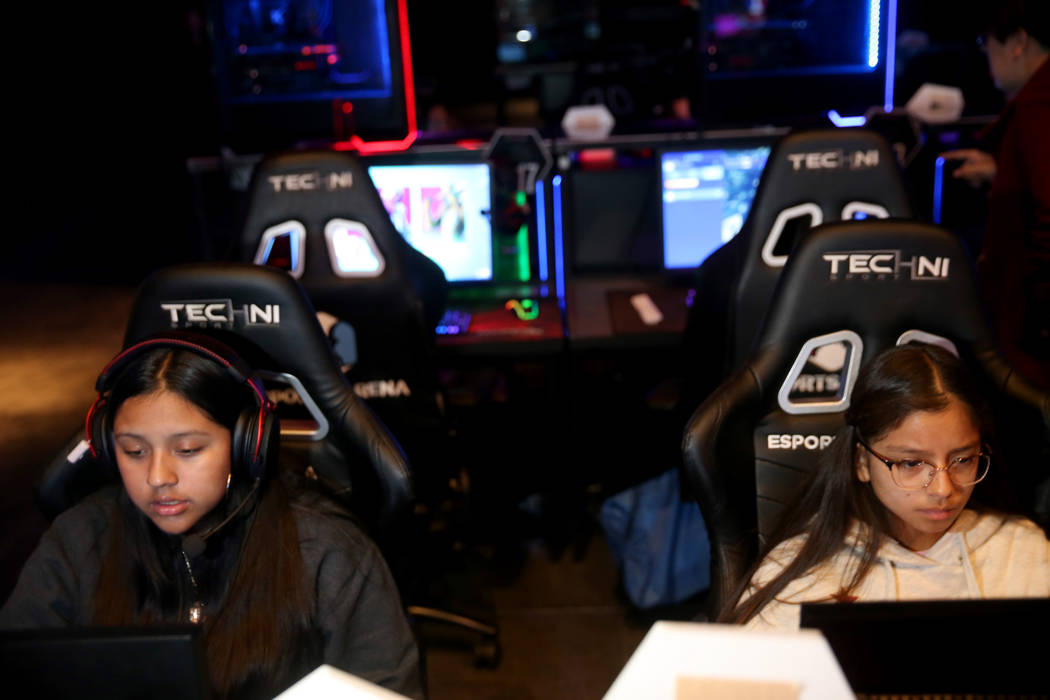 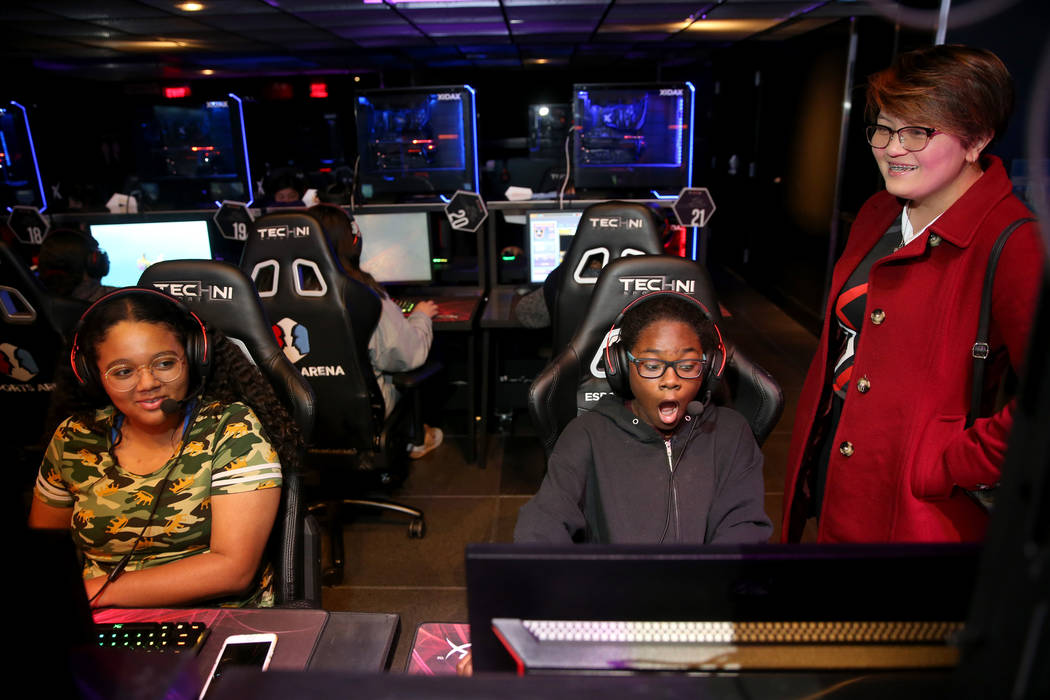 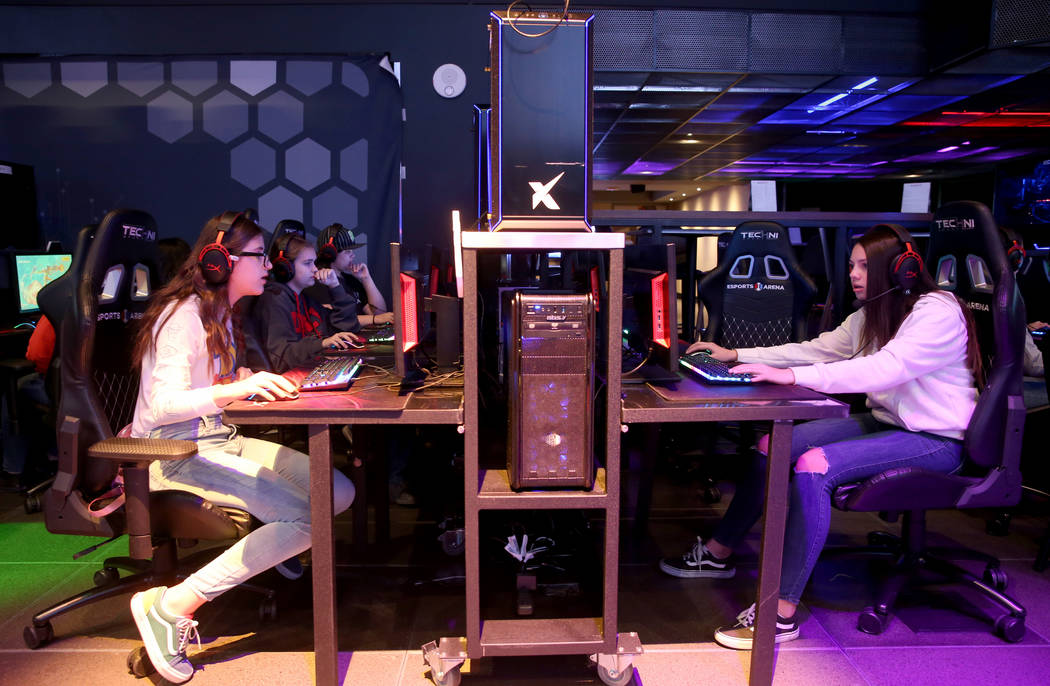 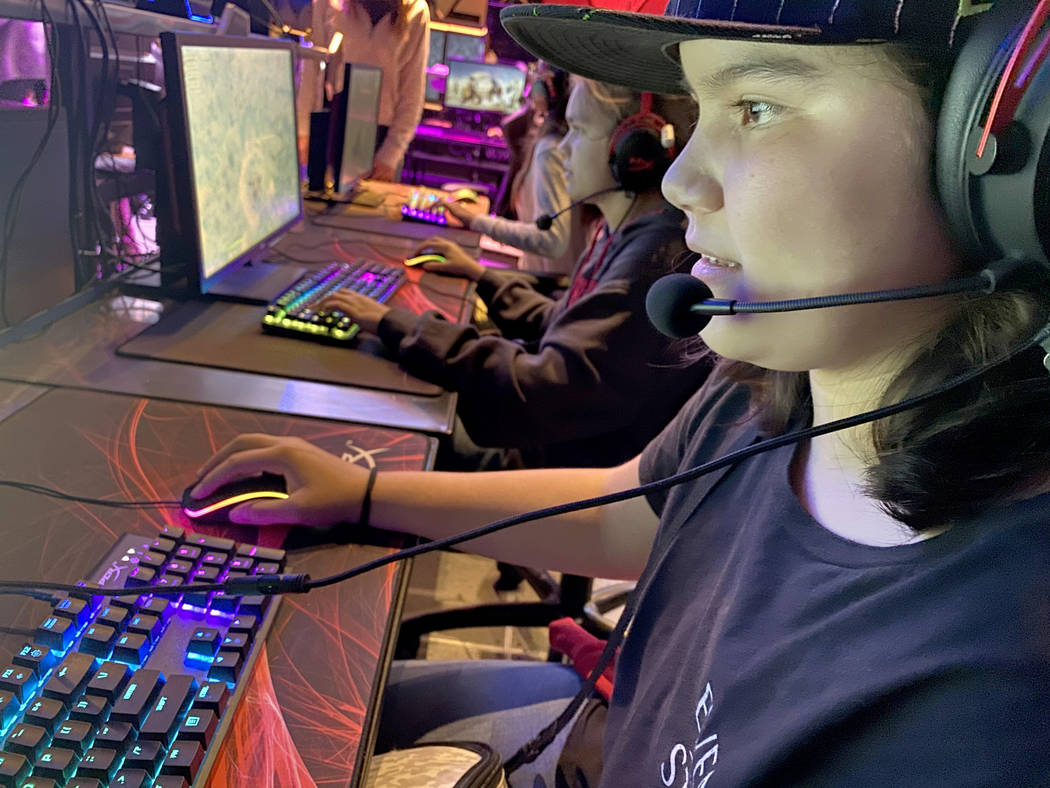 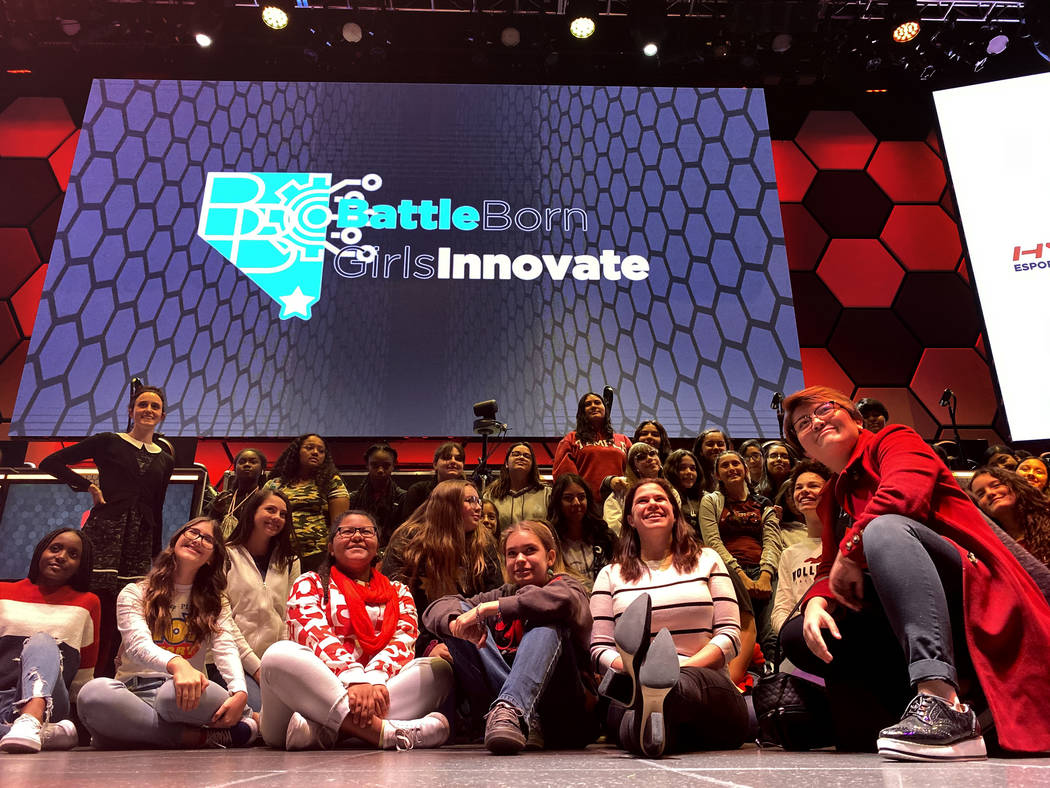 It marked the first time Sydney Ferguson played the online game Fortnite, especially on equipment used during tournaments at the HyperX Esports Arena inside the Luxor.

But Wednesday’s outing was much more than a game.

Ferguson was one of 40 eighth-grade students from Martin Middle School able to tour the HyperX arena, play Fortnite and listen to Yzzi Ocampo, UNLV student and former 8-Bit Esports team member, and Brett Abarbanel, director of research for UNLV International Gaming Institute, share their experiences as women in the gaming industry.

The students were selected to take part in the recently established Battle Born Girls Innovate, a two-day educational program hosted by the institute to teach middle school girls about careers in STEAM, or science, technology, engineering, arts and math. Launched earlier this month, the program targets girls in Clark County School District Title 1 schools where 85 percent or more of the student population is enrolled in free or reduced lunch programs.

“This was day two of visting local companies, hearing from females in the industry that are directors, managers in various hospitality, gaming, technology career fields,” said Snehal Bhakta, Career & Technical Education administrator for CCSD and leader of the district’s #GirlsinSTEM #GirlsinTECH Initiative and Project. “The whole goal was the awareness and opportunity and obviously, give the students the opportunity to get some hands-on learning experience and hopefully, help build their interest and passion to careers that are here in Southern Nevada for young women.”

“What’s unique about Battle Born Girls and the YES Program is they’re the only programs that bring CCSD, the university and the industry together,” she said.

Unlike the YES program, Battle Born Girls Innovate focuses on middle school students because Hoffman said she felt it was a “crucial and impressionable time” as students are preparing for high school.

Gina Nakahara, robotics coach at the middle school, said the program serves as a great opportunity for the students.

“Targeting the eighth-grade students is great because they’re getting ready to pick a high school, and hopefully this will inspire them to choose a STEM major,” she said.

Student Jordan Tyrell, who wants to go into a STEM field, expressed enthusiasm for what the program has taught her.

“I never really thought about having an actual career in (STEM). I always just saw it as a separate thing I learned about in school, but going on this trip really made those connections in my mind,” she said. “I liked listening to all the executive people speak because I’d like to be in an executive position one day and make all the important decisions because that’s just cool.”

The long-term goal is to launch the network across the city “to provide everyone an opportunity to digitally access educational opportunities,” the city said.