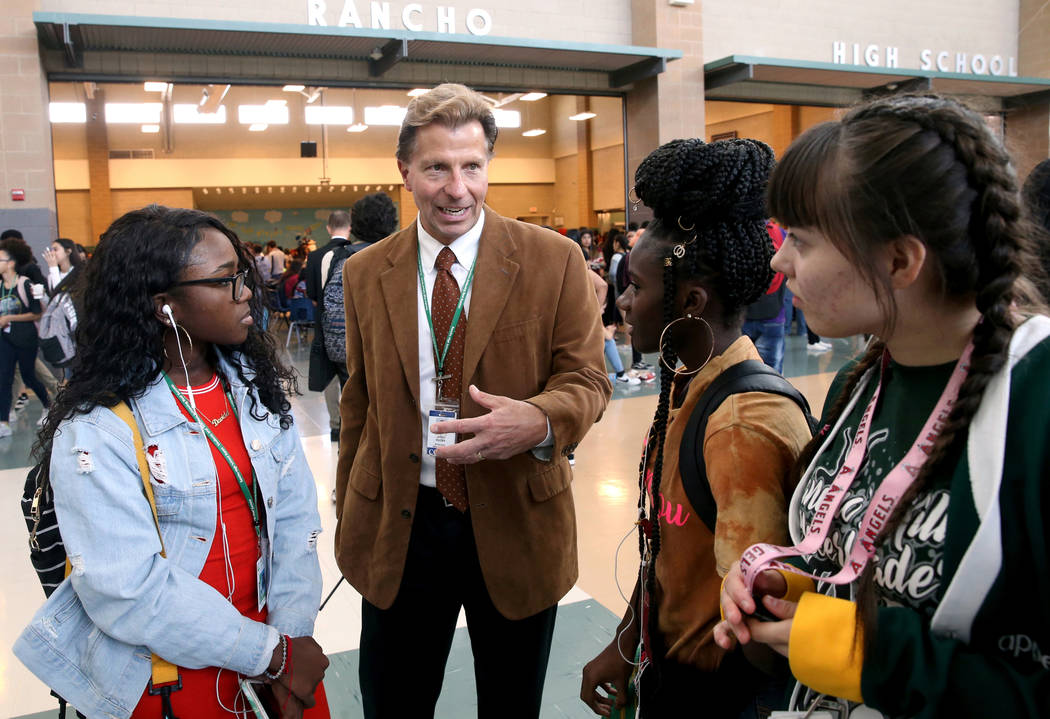 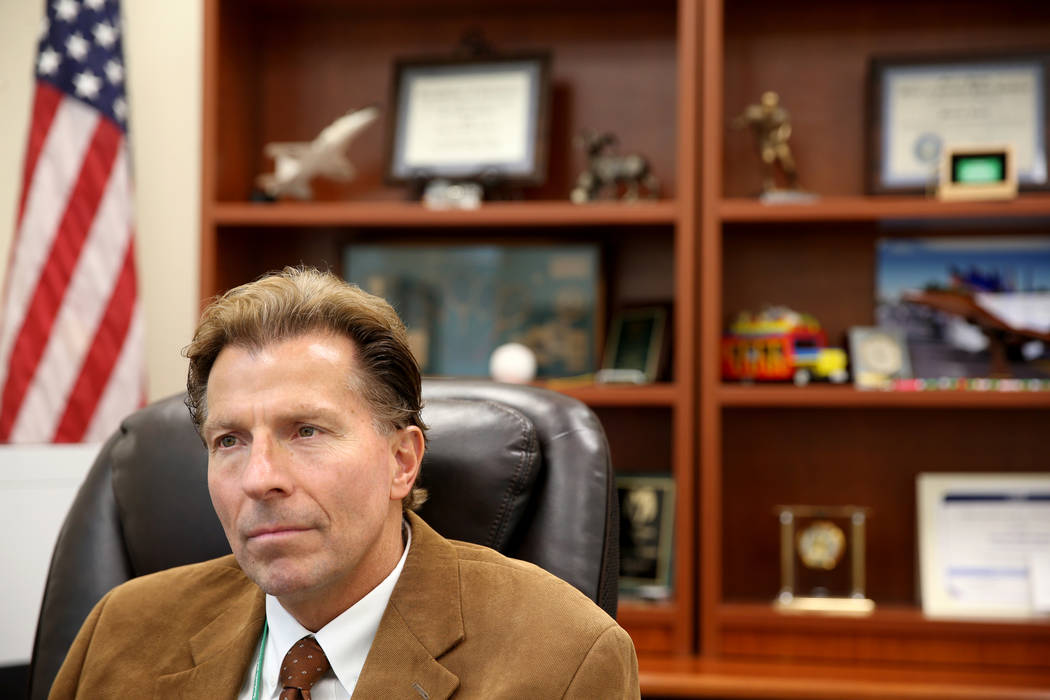 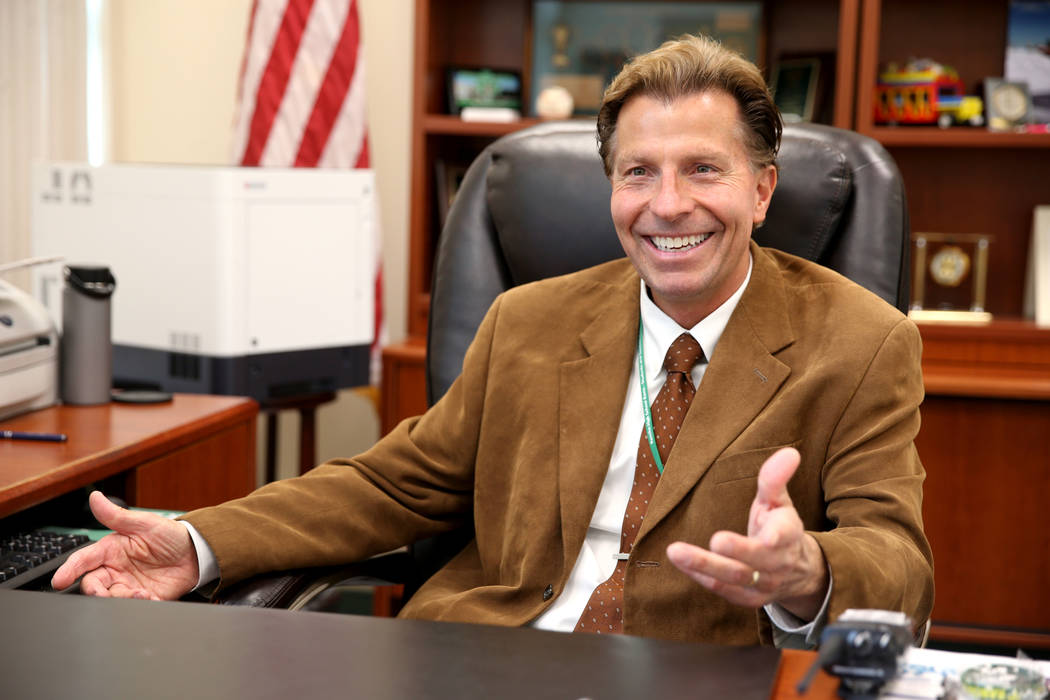 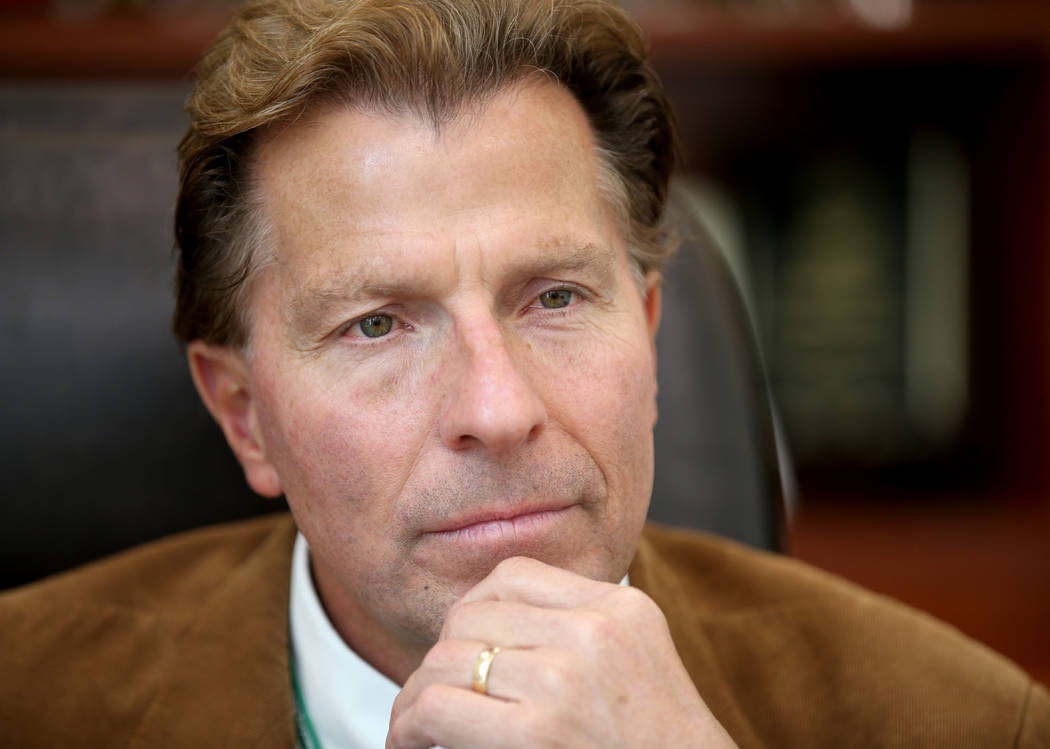 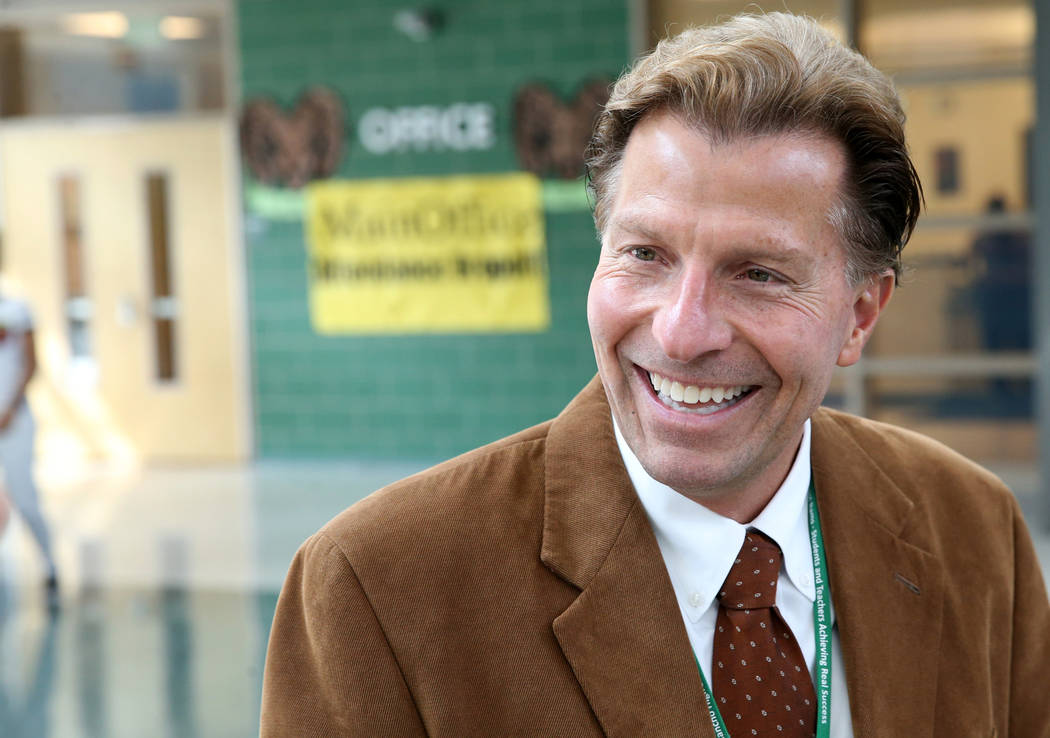 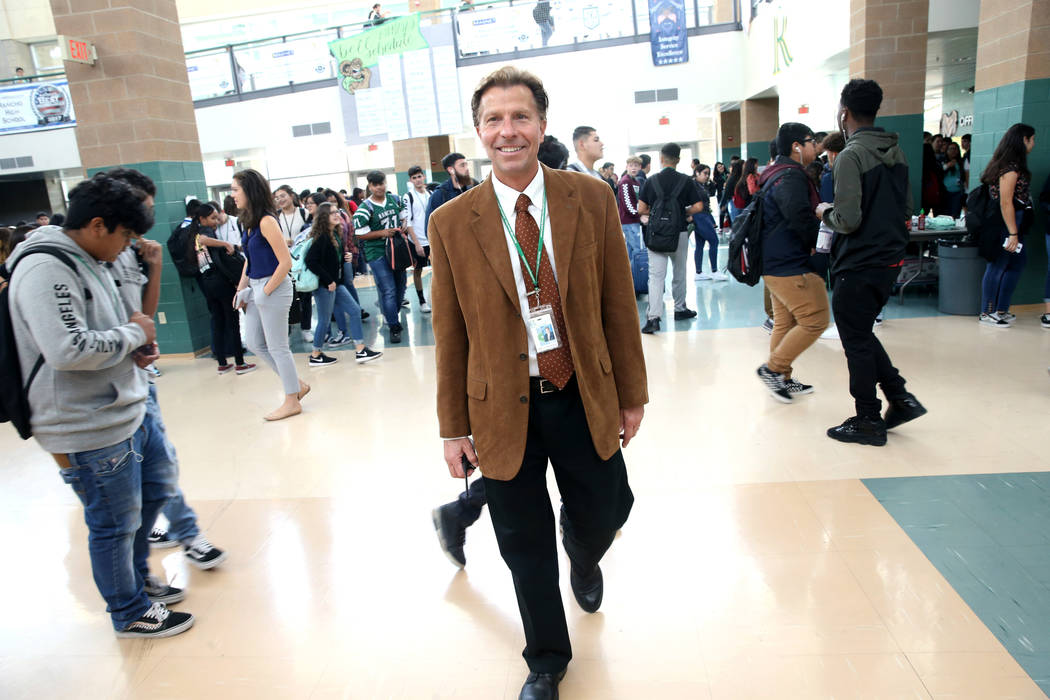 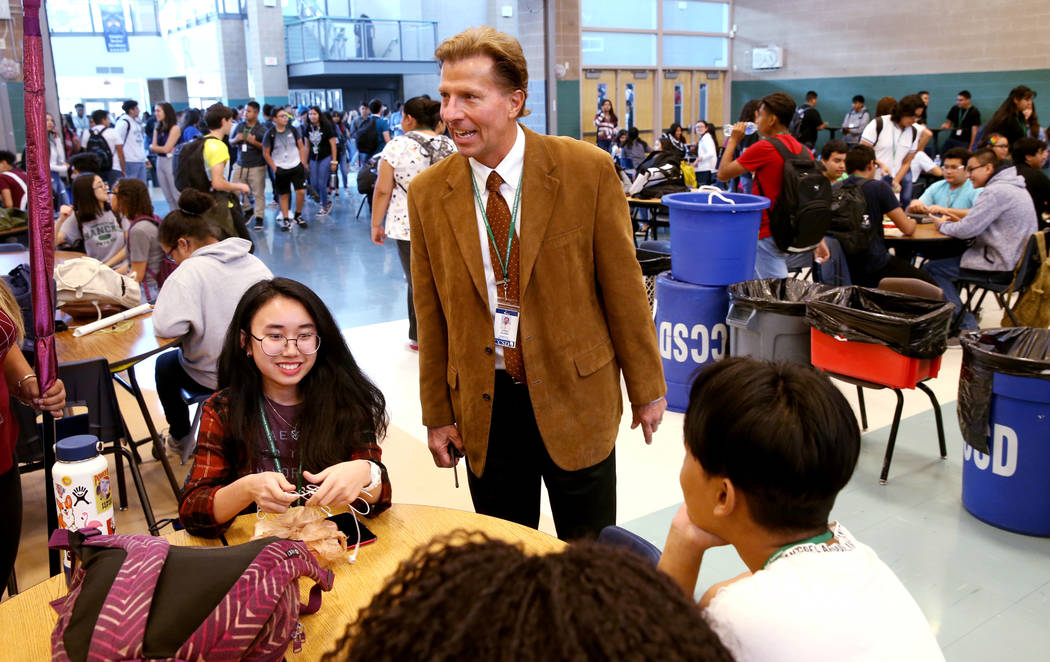 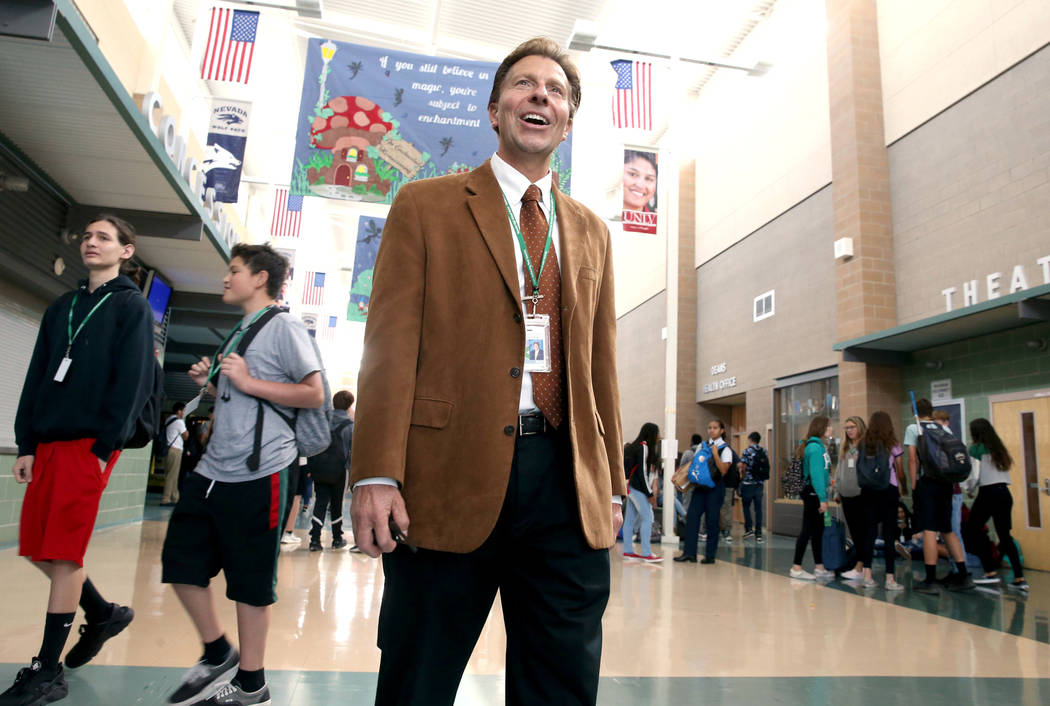 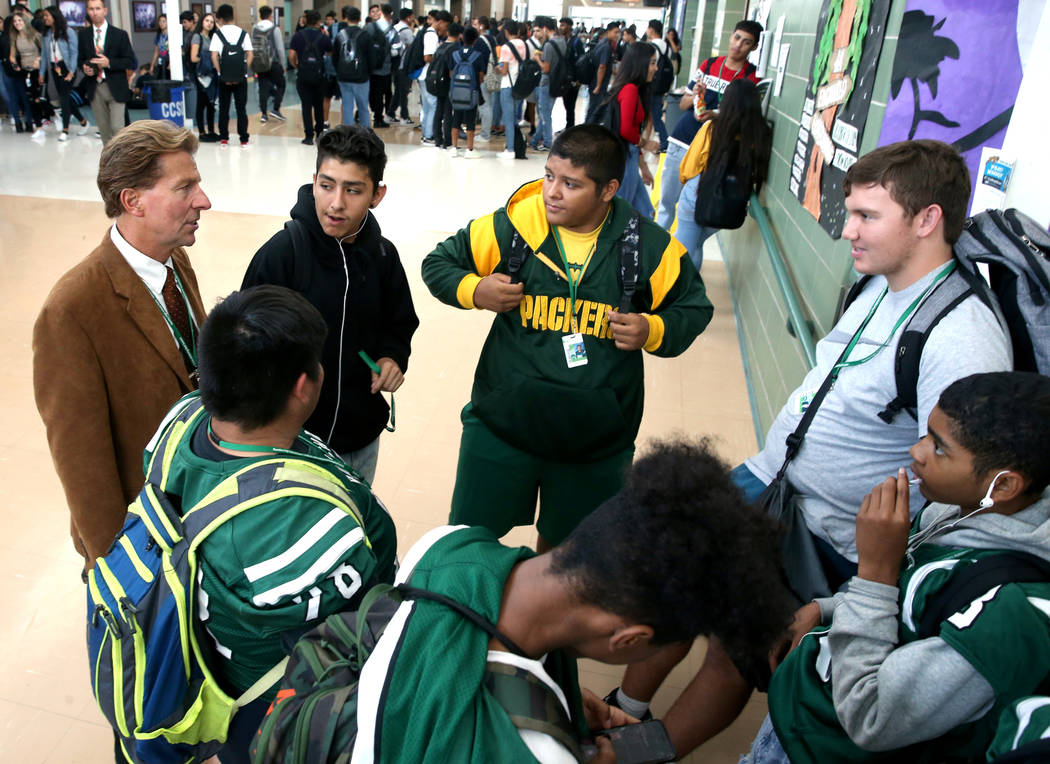 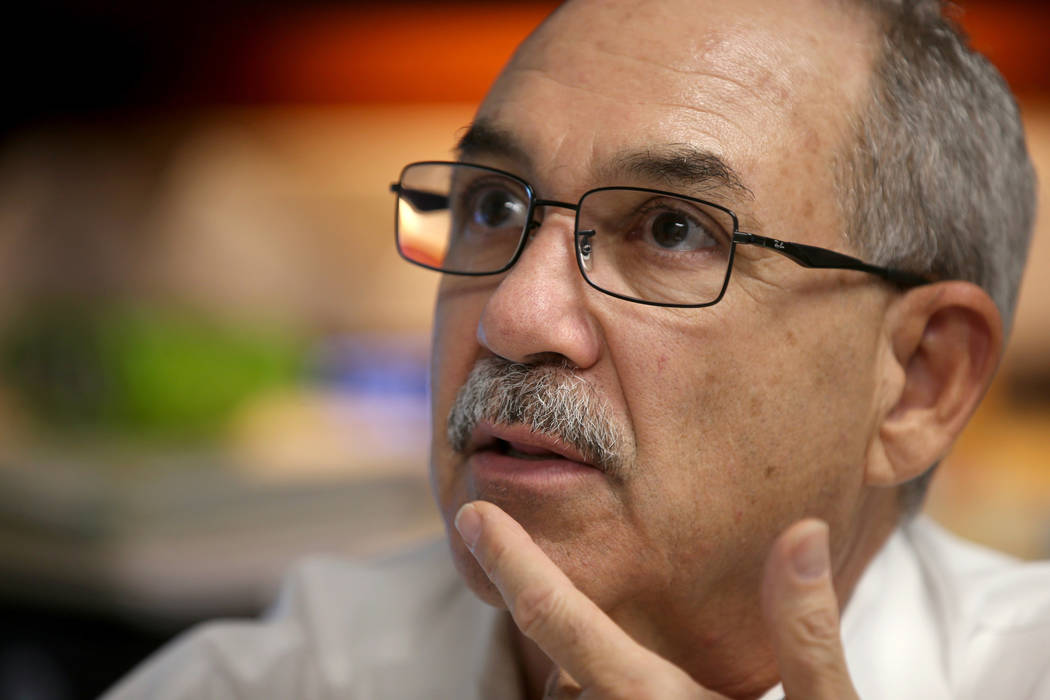 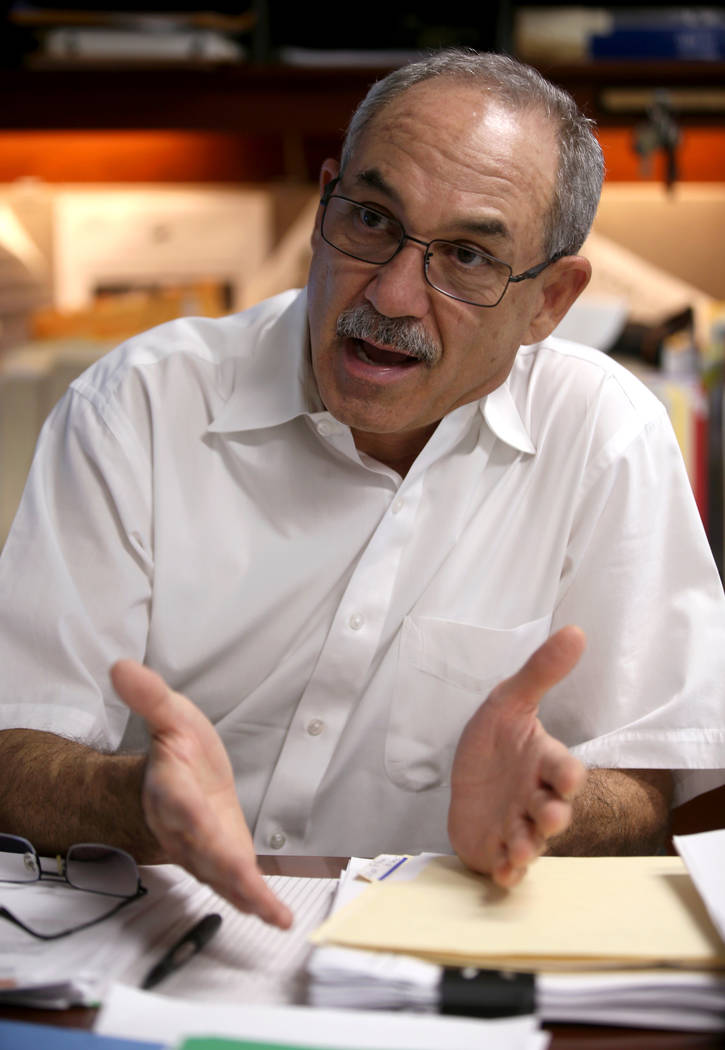 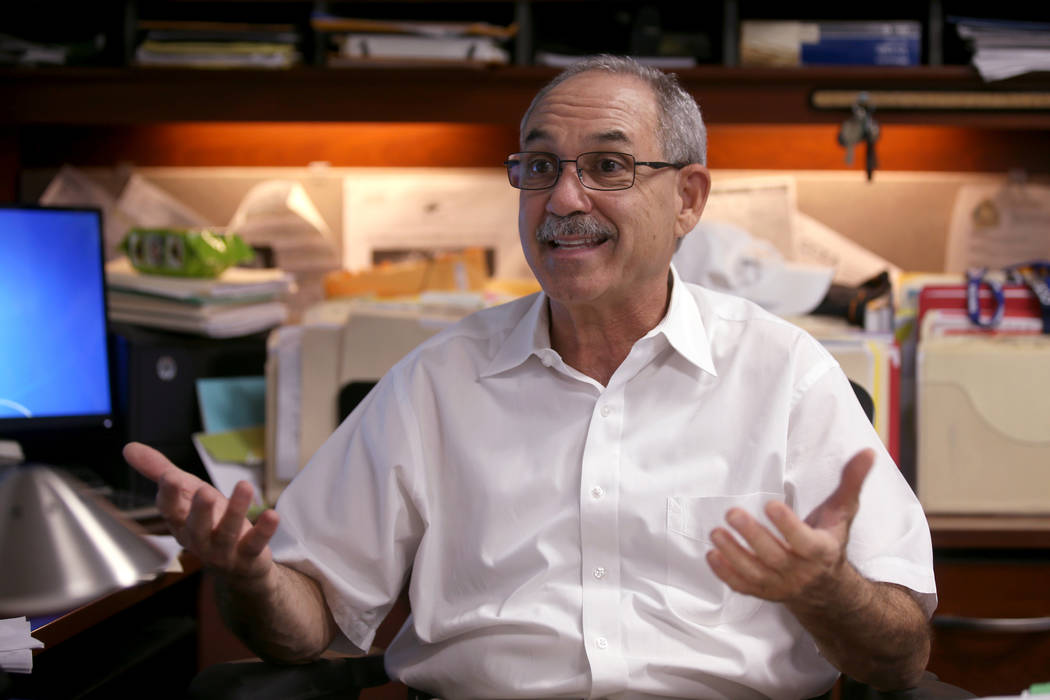 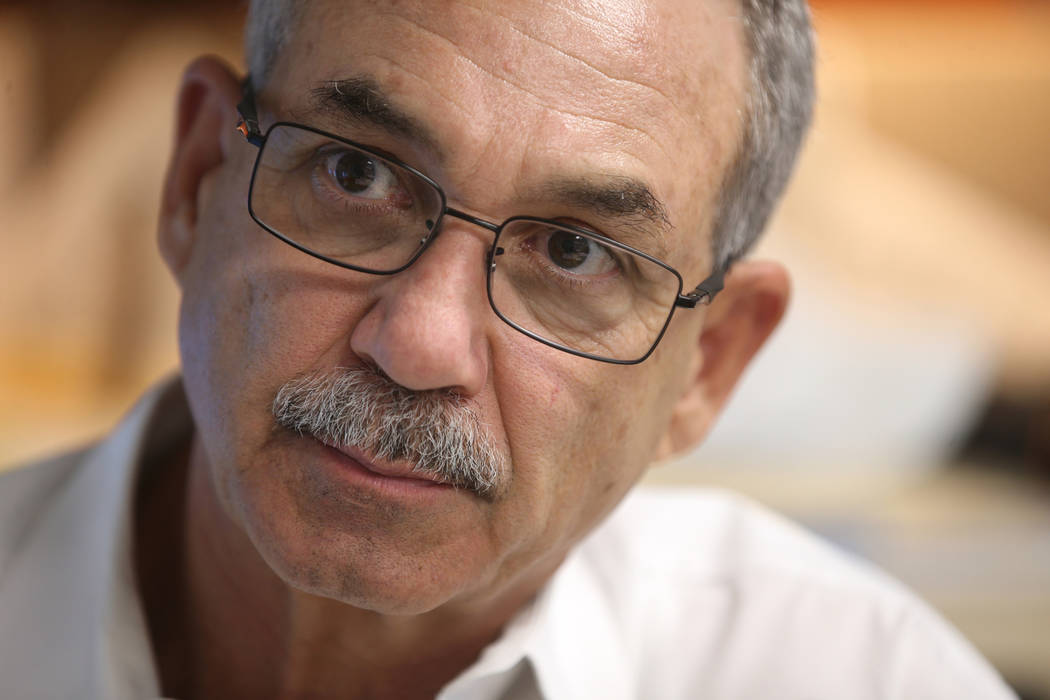 The Clark County School District hasn’t had a single ineffective principal in the past four years.

At least that’s the story told by district records, which show that only one out of the more than 300 principals evaluated each year has been rated in the second-lowest rating category — “developing” — since 2015-16. And none has been rated as ineffective, the lowest rating.

Over that same time period, an unknown number of school leaders have been placed on leave, demoted or have slipped into retirement while under scrutiny, with little information given to the public and parents. Meanwhile, the district has consistently had more than 100 one- and two-star schools, the lowest tiers in the state’s academic performance standards.

It’s a system that district and teacher union officials say needs to change to provide more thoughtful evaluations and better support for those principals in need of improvement.

“Professional development has been lacking,” Deputy Superintendent Diane Gullett acknowledged. “Veterans and the new folks will tell you that, so we’re going to provide more and better differentiated support.”

Meanwhile, the teachers union has launched a new internal system that seeks to bring attention to principals who have persistent issues with school staff and climate. The new “Decker policy” is a reference to previous reporting by the Review-Journal about the Decker Elementary School principal’s continuing run-ins with staff and parents.

The leader of the administrators union, meanwhile, notes that the job of principal has grown more complex with each passing year, adding to the demands placed on school leaders.

But Executive Director Stephen Augspurger of the Clark County Association of School Administrators and Professional-Technical Employees also questions whether a school’s star rating should be tied to a principal’s evaluation, saying that they are high performers who have already been promoted numerous times by the time they reach the leadership role.

“It would seem to me in the course of that trajectory if there was a problem with your skill set, somebody would have identified that problem,” he said. 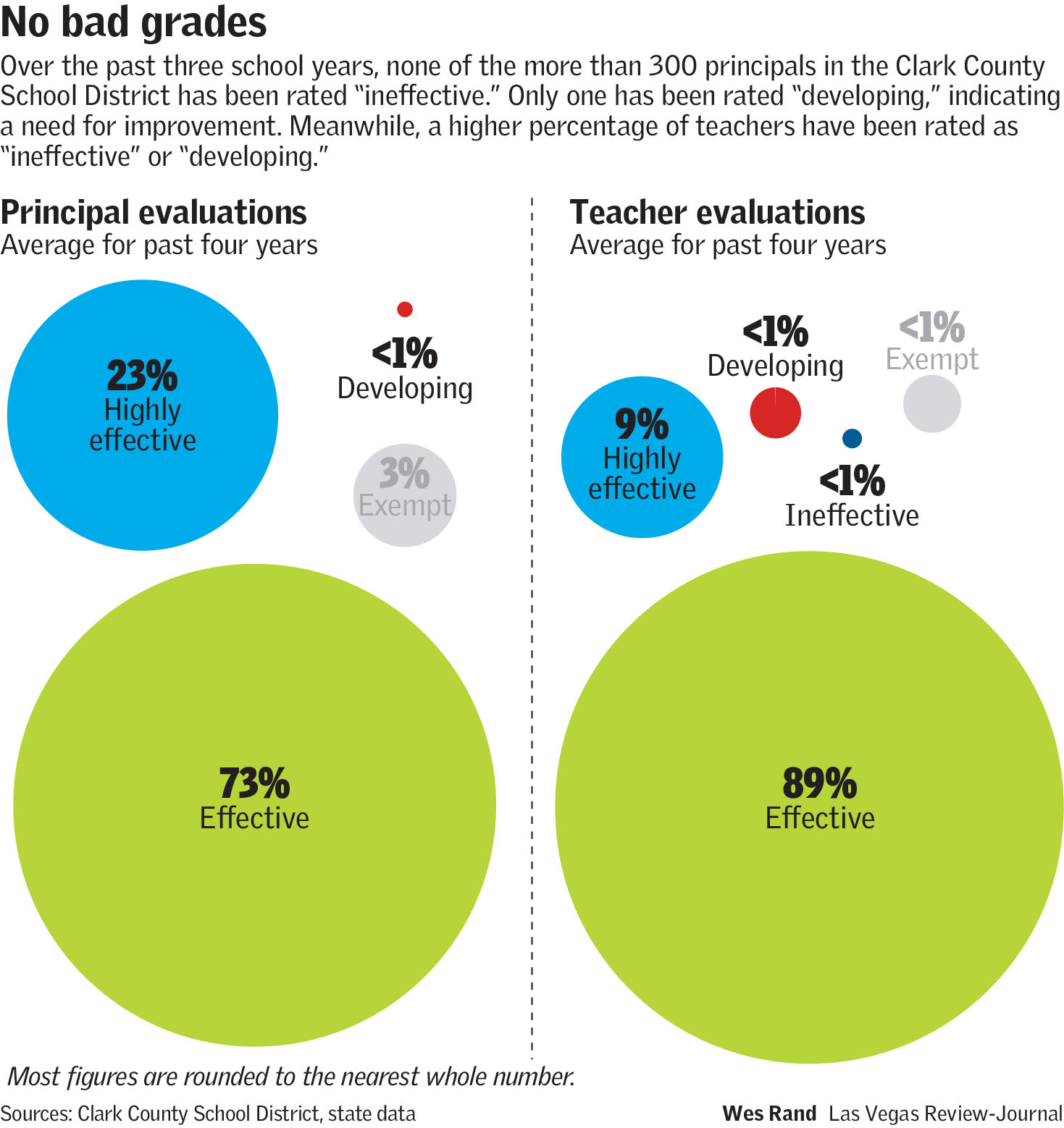 Over the years, state law has provided two major ways to hold principals accountable for lackluster academic performance or workplace issues, tools that have rarely, if ever, been used by the district.

And recent changes to state law during the 2019 legislative session made the accountability process more lenient for administrators.

State law previously provided that if principals in their three-year probationary period received ratings of “ineffective” or “developing” — meaning they need to improve to be able to adequately perform their jobs — during evaluations by one of three regional superintendents or school associate superintendents, their contract might not be renewed the next year. Principals who had completed the probationary period would revert to probationary status if they received an ineffective or developing evaluation for two consecutive years.

Now, those provisions extend only to principals rated ineffective.

But the provisions likely have not been triggered in the past four school years in Clark County. No principals have been rated ineffective, and just one was rated as “developing.” The district could not confirm whether that principal was probationary and, if so, whether his or her contract was not renewed.

The district also has no record of any principals who fell into either of those categories, and that provision of state law was repealed in the spring.

In contrast, every year since 2015-16 roughly 1 percent of the more than 15,000 evaluated teachers have been rated as “developing” or ineffective. Also, a handful of postprobationary teachers — between five and 17 — have also been placed on probationary status each year after receiving poor evaluations for two consecutive years.

The administrators union contract contains a progressive discipline policy that dictates how misbehaving or underachieving principals may be disciplined. But those records are not public, as the district considers them private personnel files.

That means some principals have been placed on leave with little explanation or have remained on the job despite substantial staff and parental concerns.

Parents at Eldorado High School got a brief message about new leadership at the school after the district’s decision to place Principal Dave Wilson on leave in August, but no explanation has been given for his departure. Parents at Cashman Middle School likewise received no formal information on why Principal Misti Taton was assigned to work at home in January.

And despite substantial backlash from demoralized teachers and frustrated parents at Decker Elementary, Principal Alice Roybal-Benson remains on the job, according to the district.

The teachers union estimates that 3 percent to 5 percent of administrators, including principals, either need more professional development for their job or aren’t a good fit for the principal role.

Executive Director John Vellardita of the Clark County Education Association said the union also tracks principals who have moved from school to school, which can be an indication of poor performance commonly referred to in the education world as “the dance of the lemons.”

Part of the issue, he said, lies in the district’s substantial growth over the past decade or so, which resulted in a deterioration of training and support for principals.

“I think a number of people got promoted who never should have gotten promoted,” he said. “Just like hiring sometimes an educator that maybe should have never been hired.”

The teacher union’s “Decker policy” seeks to address such cases among principals, first examining whether there is a widespread morale issue at a certain school.

If there is, the union now will conduct interviews with every teacher and then have a conversation with the principal, Vellardita said. It then would escalate the matter to the district and eventually to the public if the situation is not resolved.

“Our primary objective on the front end of this is to find a solution,” he said, noting that the answer may lie in more professional development or changes in staffing.

Yet it’s unclear if this process will work.

The union has had a similar process in the past that involved surveying staff at such schools and sitting down with the district to discuss issues, but it was not effective, Vellardita said.

The district also conducts anonymous staff surveys every year to highlight any issues, but teachers and the union say those are not often filled out truthfully — if they’re filled out at all — because of fear of retaliation.

The district, meanwhile, says it is making changes, too.

That includes this year’s rollout of a new “improvement plan of support” for principals, Gullet said, so that the district can work with leaders struggling to grow into their roles.

“We have to be sure before we move toward any type of disciplinary action as far as effectiveness goes that we’ve done our due diligence to provide resources and support,” she said.

The district has also stopped shifting unwanted leaders from school to school, she said. The administrator’s supervisor would first need to demonstrate that they have tried to develop and train the administrator in question.

“As far as just moving those folks around, we’ve said we’re not doing that anymore,” Gullett said. “There needs to be evidence, documented proof of that work, and the evaluation should reflect that as well.”

All those evaluations translate into a heavy workload for principal supervisors. If the nine regional and associate superintendents divided the duty equally, it would equate to roughly 40 evaluations per person.

Augspurger, executive director of the administrators union, says the principal job has grown much more complicated over the years.

Among other challenges, he said, there are reduced financial resources and not enough substitute teachers. He also points to the need for better training and support for administrators.

“If you look at the environment that all administrators work in, first of all there’s very little talent development done in the Clark County School District,” he said. “If you want to have a great pool to pick the very best people from to be principals, you’ve got to develop that pool.”

One obstacle in having truthful evaluations, he said, might lie in the willingness of the regional superintendents rating principals to offer constructive criticism in their evaluations.

“Candid feedback is essential for one’s improvement,” he said. “But the person receiving the feedback has to have the belief that the person delivering it is investing in them.”

As with teacher evaluations, though, everything is subjective, Rancho High School Principal James Kuzma said.

Kuzma remembers being listed in a teacher union newsletter as one of the worst principals to work for around 2001, when he was at Hyde Park Middle School. He’s now in his 11th year at Rancho, where he has led its transformation from an underperforming school to one with four stars.

He admits he’s different now than he was as a first-year principal, when he wasn’t sure he had a vision as a leader.

“It evolved for me as I grew up as a principal,” he said. “… Now my whole approach is we need to just stop saying what we can’t do, let’s figure out what we can do.”

As for his evaluation, he said, he puts less emphasis on his personal rating than on his school’s star rating in the state accountability system.

“I read it because I have to sign it. I give it back to (the supervisor),” he said. “But I’m waiting for September, when the (Nevada State Performance Framework ratings) come out, because I want to know what we did made a difference.”