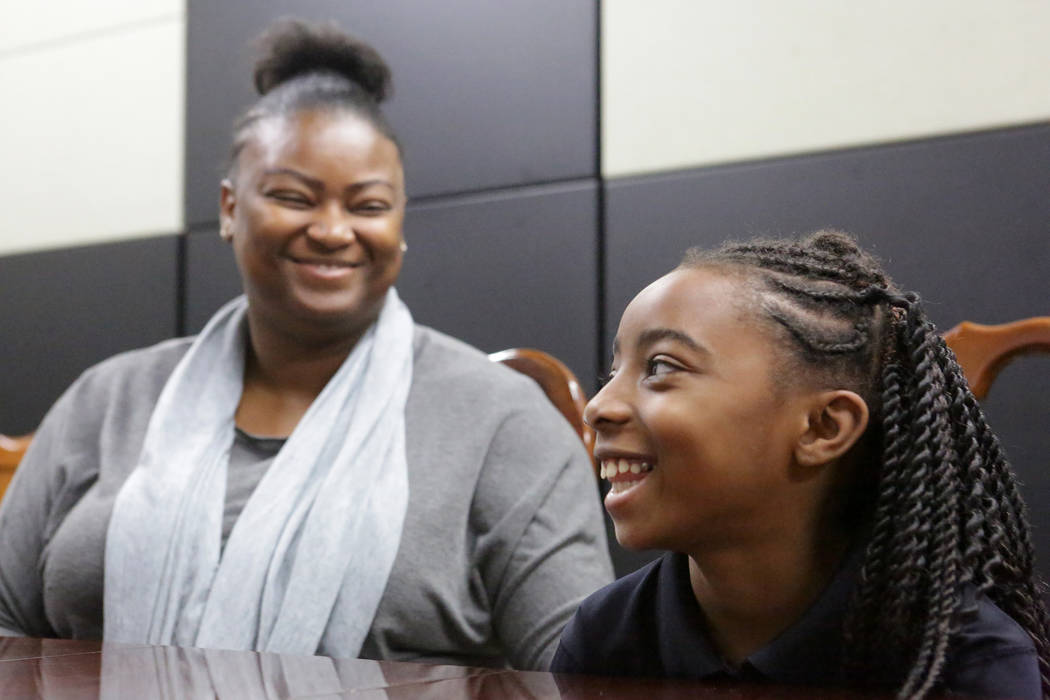 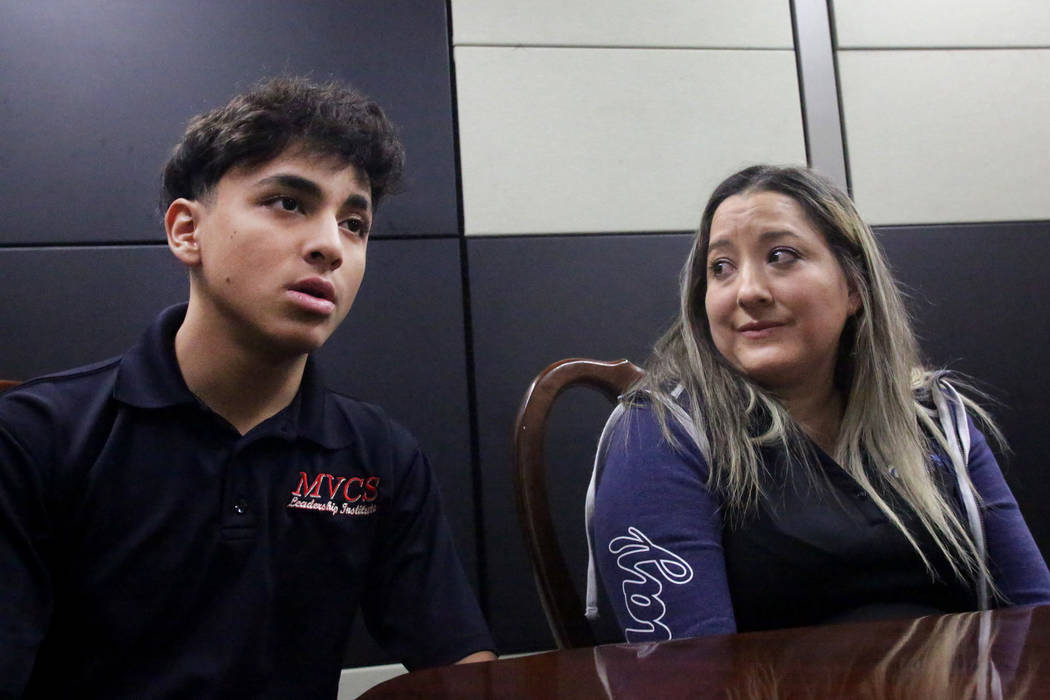 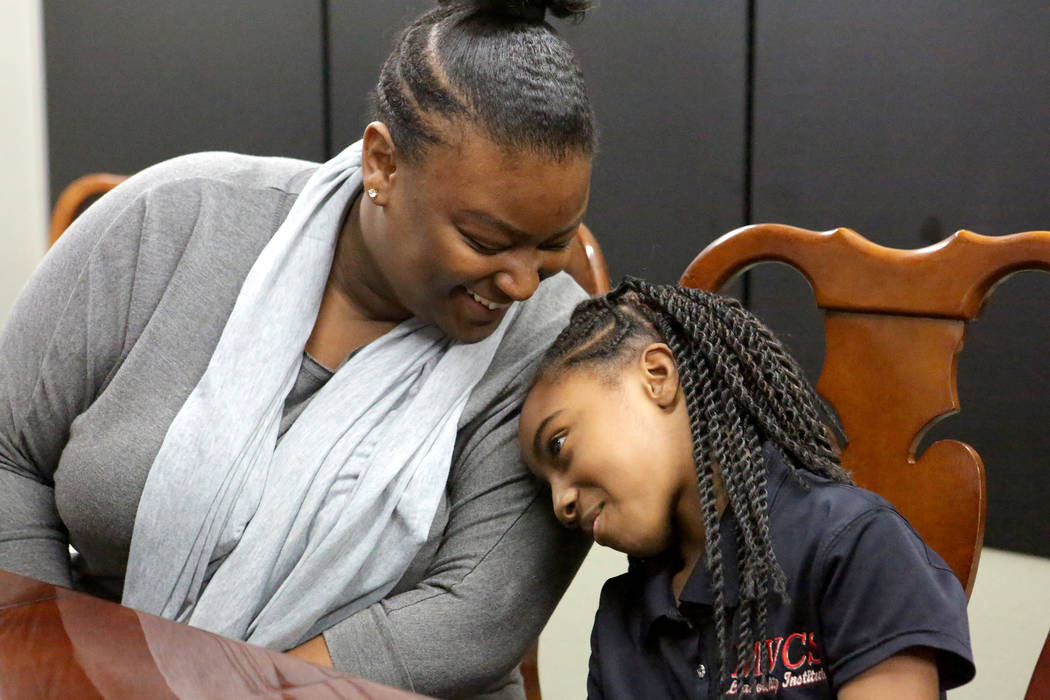 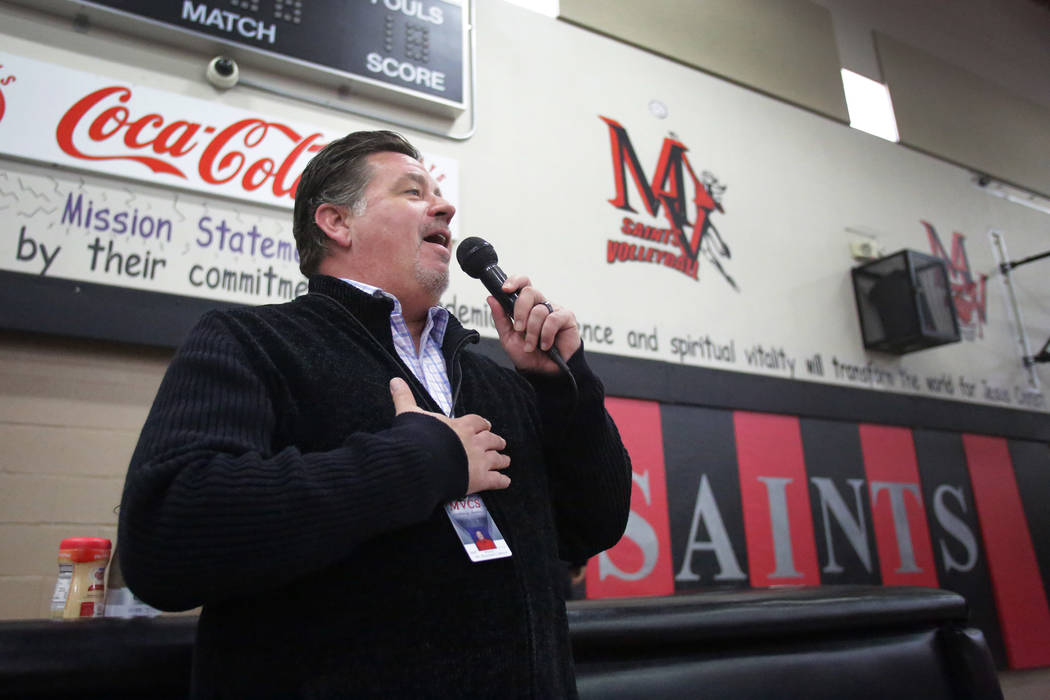 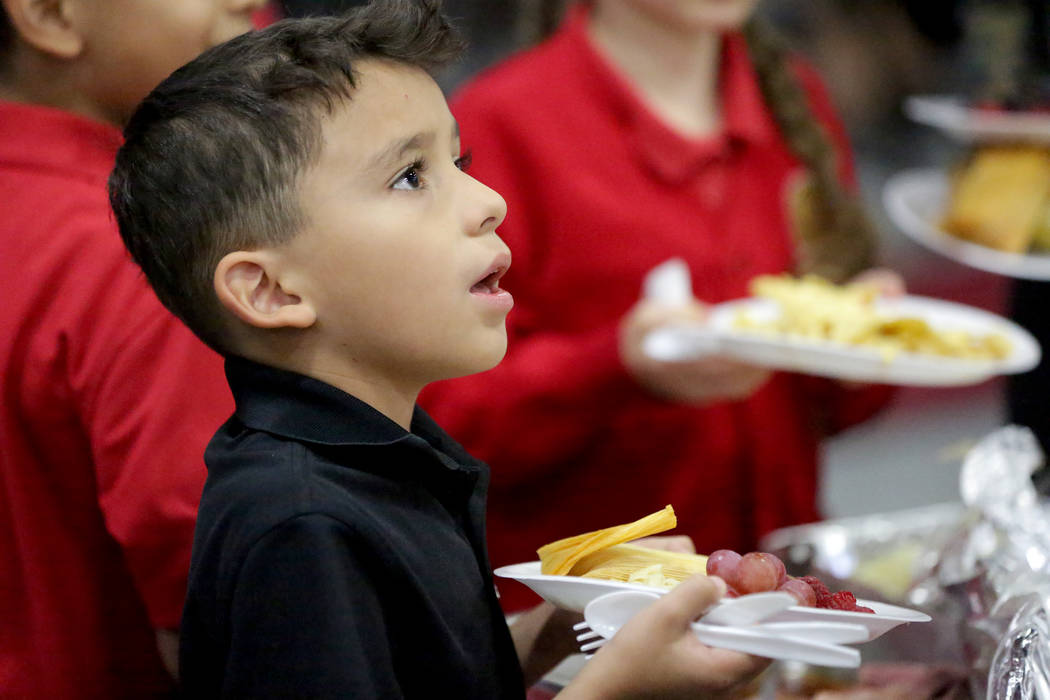 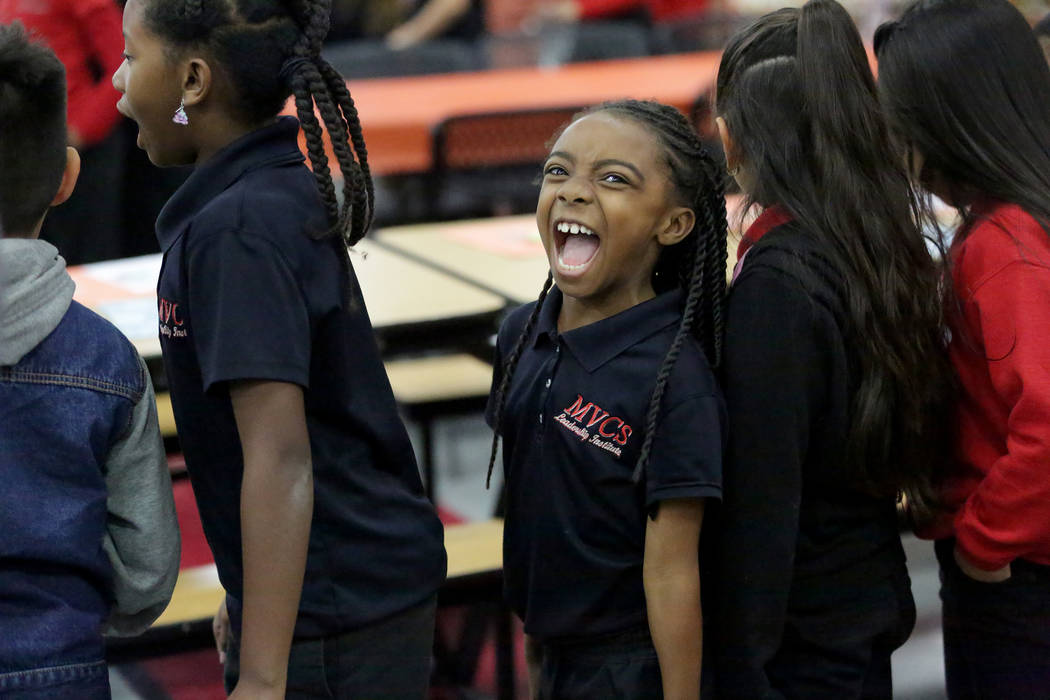 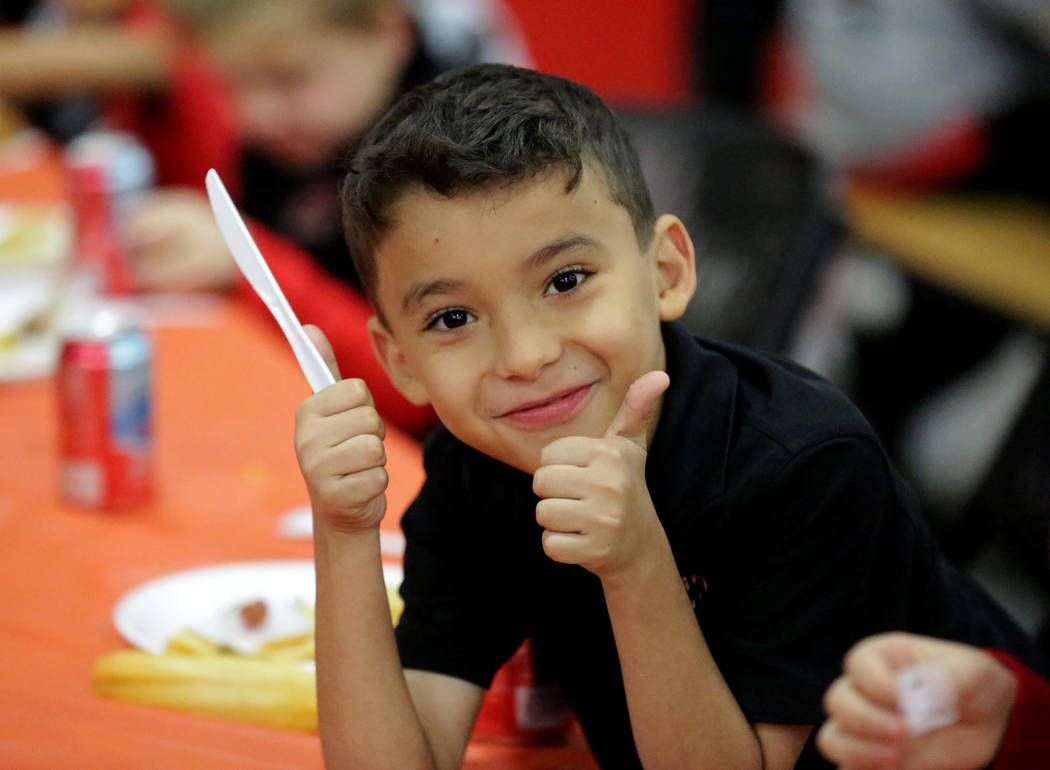 Jose Diaz was on the wrong path in public school.

There were a lot of bad influences for the seventh-grader, who did not have the best behavior.

“It was just a horrible environment,” he said. “I just hung around with the wrong people.”

Now, the 15-year-old is one of thousands of Nevada students enrolled in a private school with money from the Opportunity Scholarship program. It’s his second year at Mountain View Christian School in Las Vegas, and he loves it.

The scholarship, launched in 2015, allows businesses to donate money toward tuition for low-income students in exchange for a tax write-off.

“The program has been wildly successful with the students and the families, giving opportunities to kids who otherwise wouldn’t have it,” said Melissa Schroeder, an education program professional for the state Department of Education.

For parents like Rosa Diaz, Jose’s mother, it’s a life-changer. The change in her son was like night and day.

“I’m very grateful because he was doing bad, and he’s doing great now,” said Diaz, a single mother. “It’s like they changed his mentality.”

Since 2015, scholarships have gone to students in 82 schools, the vast majority of which are religious campuses.

Families must have an income of no more than 300 percent of the federal poverty level to qualify, or no more than $75,300 for a family of four in 2018.

This year, Mountain View was among the most popular choices, receiving $808,143 in scholarships, according to the latest available state data. Of the roughly 300 students there, 150 are on the scholarship, according to Executive Principal Raymond LeBoeuf.

That includes Jose and his younger brother, 8-year-old Angel, whose tuition cost $8,899 and $7,200, respectively. That’s more than their mother, who makes about $28,000 and supports three children, could afford.

Now, Jose said, his education means a lot more to him than it did before he attended Mountain View.

“Back then it was just I wanted to make it through,” he said, reflecting on his previous years in school. “And now I actually want to make it to college, you know, and actually have a chance.”

Other schools are tailored to children with learning disorders. New Horizons Center for Learning is a K-12 school that caters to students with high-functioning autism, attention deficit disorder and dyslexia.

Principal Barbara Bidell said the scholarships have helped diversify the school, which carries a tuition of $12,000 to $14,400.

“Kids are able to come here who otherwise would not be able to, and so that is really helpful,” she said.

The Legislature initially approved the scholarship program with a maximum tax credit of $5 million for 2015-16. That amount grows by 10 percent each year. This year, businesses can donate a maximum of about $6.65 million each.

Only businesses that pay a modified business tax may make donations to any one of three scholarship-granting organizations: the Education Fund of Northern Nevada, the AAA Scholarship Foundation or Dinosaurs and Roses.

Those groups, which may take a small portion of the donations for administrative expenses, grant scholarships of up to $8,132 to each student who applies.

Parents must pay for the remainder of the tuition that the scholarship does not cover. The Diaz family, however, had that paid through Mountain View’s scholarship fund. 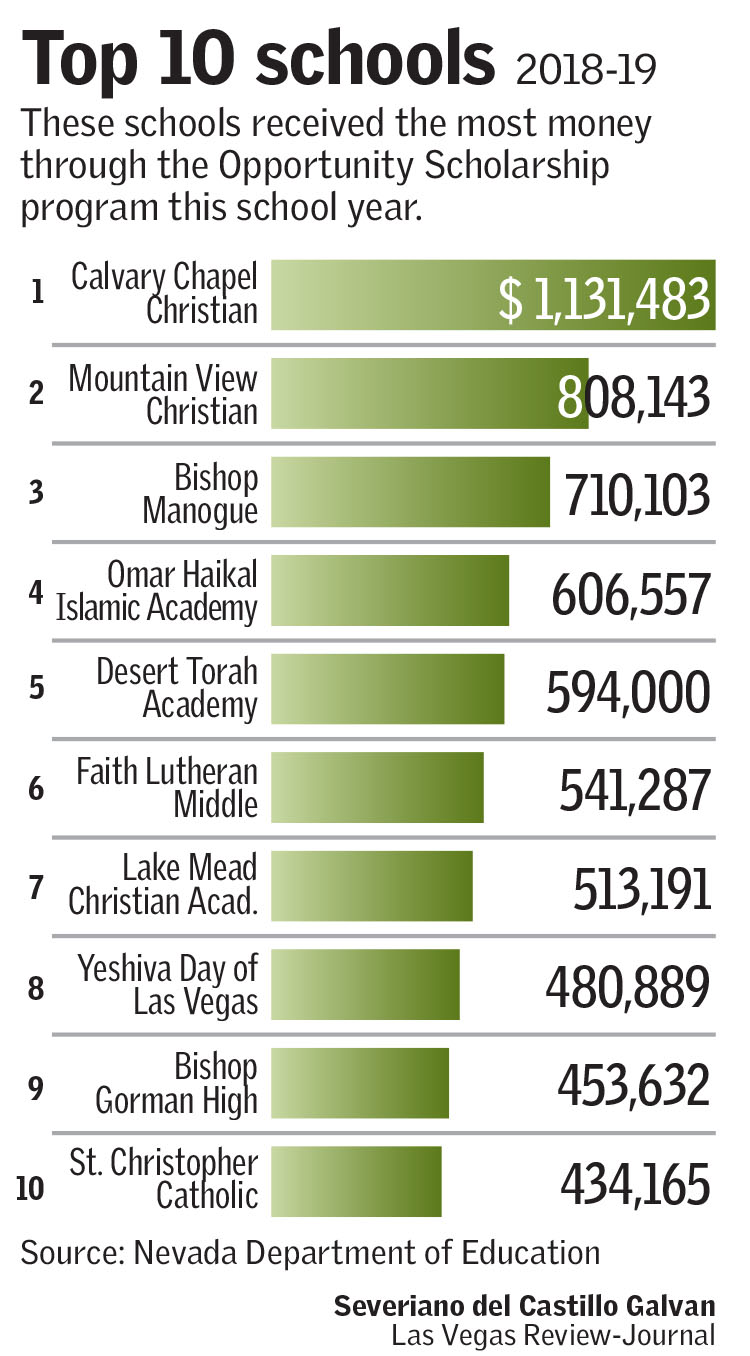 That amount has grown in accordance with inflation from the original maximum amount of $7,755 for 2015-16.

Scholarship organizations may set requirements to determine how much money a student receives and what the student must do to keep the scholarship.

AAA, for example, may take away a scholarship because of poor attendance or expulsion. The organization also has guidelines on the amount each student receives. New applicants must have a household income that is no more than 185 percent of the federal poverty level in order to receive the maximum $7,500 it awards.

In 2017, the Legislature boosted the amount of money available with a one-time infusion of $20 million in tax credits, a compromise after the political deadlock over education savings accounts, another form of school choice.

Businesses maxed out that credit by the end of fiscal year 2018, donating $20 million on top of the $6.05 million maximum for that year, according to Schroeder, of the Department of Education.

Scholarship groups don’t have to use all of that money in one year. They can build up reserves to ensure that a student can continue going to the same school year after year.

Michele Morgan, executive director of Dinosaurs and Roses, said the scholarships are part of the greatest program ever.

“My big plea, and my big challenge, is I’m begging other companies that pay modified business tax, please contact me and be a part of this wonderful, wonderful program,” she said. “Because it’s out there for the taking.”

The nonprofit, which began as a thrift store, has helped fund over 450 students this school year.

“To give these children the opportunity to go to private school, and to a lot of these kids that are living in such poverty, to be able to have their mind expanded in school and do well in school, I think it helps them tremendously emotionally with what they may be lacking at home,” Morgan said.