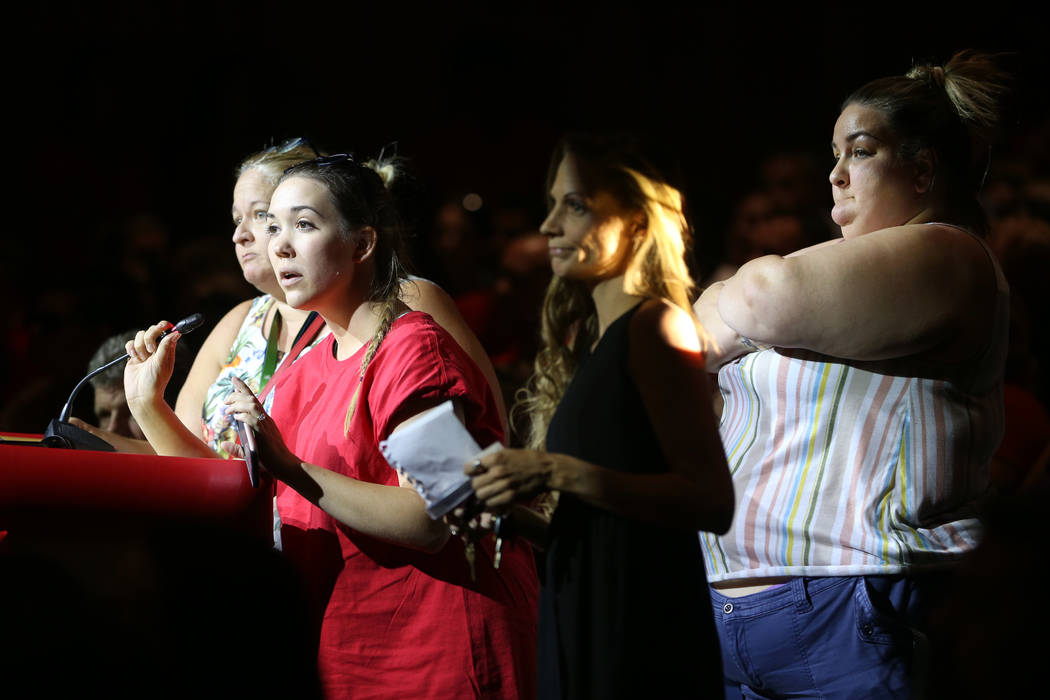 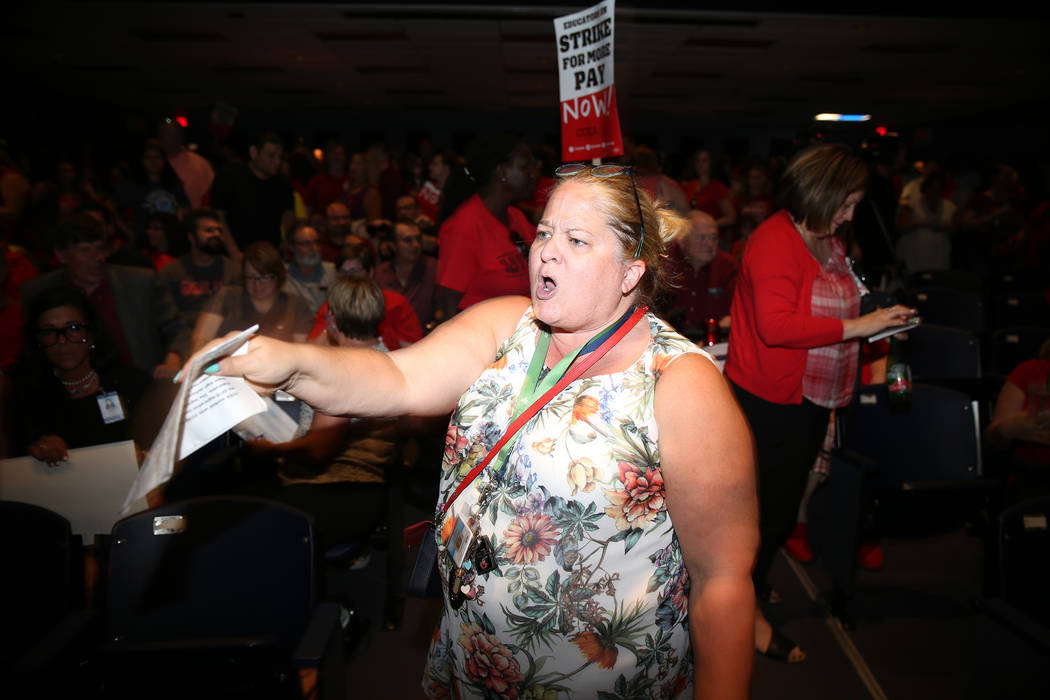 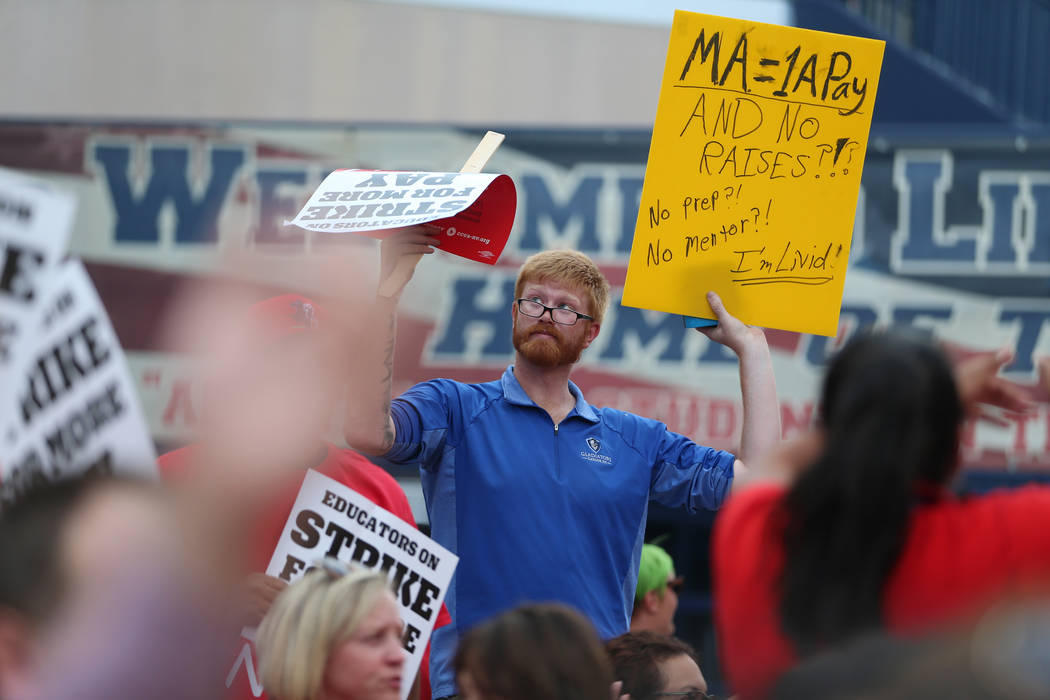 He was halfway through his master’s degree when the district and the teacher’s union agreed to a new salary system that meant he needed more than a master’s to receive a pay raise.

So — perhaps naively, he admits now — he started working on his second master’s.

More than $20,000 later, he’s looking at a proposed teachers contract that does not give him the so-called column advancement in the salary table that would mean an annual salary increase of over $5,000.

“I just have never been dealt dirty like this,” Bailey, who teaches at Advanced Technologies Academy in Las Vegas, said of completing the necessary work only to be left without a raise. “In real estate, in technology, in anything, I just have never had anybody go do that.”

Bailey’s dilemma is shared by about 2,600 other teachers in the Clark County School District and is the crux of a potential teachers strike in Clark County, one that has the potential to impact over 350 schools and hundreds of thousands of students in Southern Nevada.

If educators do walk out of classrooms on Sept. 10 as the union has threatened, they will join a wave of thousands of educators in at least eight other states who have held some sort of job action since 2018.

The Clark County Education Association has said that teachers will walk off the job if a new 2019-21 contract does not include funding for the professional development raises as well as three other compensation bumps promised by Gov. Steve Sisolak.

Those are a 3 percent raise, a 2 percent “step” increase reflecting seniority with the district and a 4 percent increase in health care contributions — all of which are included in the proposed contract the district has offered to the teachers union.

Like educators in other states, Clark County teachers say they are frustrated, angry, overworked and tired after years of pay freezes, swelling class sizes and diminished classroom resources.

But strikes or walkouts in other states that resulted in pay increases or more support for public education were strengthened by various players presenting a unified front, including cooperation among rival unions, strong support from community coalitions and even support from superintendents.

“The key to any action like that is you have to have community support,” said Dale Lee, president of the West Virginia Education Association, referring to West Virginia’s massive teacher walkout in February 2018 that sparked job actions by teachers in other states. “And you have to have the support of the entire education community, which includes superintendents, school boards, etc.”

Working across the aisle

Lee said that West Virginia teachers had experienced years of broken promises, poor health care and no raises before deciding to strike.

Superintendents in the state were supportive, calling off school so that no one was forced to decide whether or not to cross a picket line, he said.

And his association — a National Education Association affiliate —even worked with a local rival affiliated with the American Federation of Teachers as well as the support employees union.

“When you have a common enemy, so to speak, you put differences aside,” Lee said.

Cooperation was also key in Oklahoma, where employee groups worked with school boards and administrators who also chose to close schools, said Alicia Priest, president of the Oklahoma Education Association.

They also worked with their local AFT rival, she said.

“Our number one goal was student safety,” Priest said. “So as we were planning what could happen, our locals were talking with food pantries, community (clothing) closets, churches, other organizations — making sure those students who were the most at risk to not have food or not have a safe place to go had a safe place to go.”

And even though Los Angeles teachers were in a battle against their own district, the union there also worked with the community through its Reclaim Our Schools L.A. coalition that was launched in 2016, according to Alex Caputo-Pearl, president of the United Teachers Los Angeles.

The union also worked on outreach to parents.

“We were able to control the narrative and really have what ended up being a whole community strike and not just a labor strike,” Caputo-Pearl said.

Similar cooperation has been absent in Clark County, where Superintendent Jesus Jara has insisted that schools will remain open in the event of a strike.

The district’s legal counsel, meanwhile, is working on what recourse if any the district may take against a strike, which is illegal under state law, he said on Thursday. State law allows the district to file for an injunction to stop it.

And a smaller group of teachers who formed the rival National Education Association of Southern Nevada has neither supported nor opposed a strike, instead telling educators that other strikes across the country “included district buy-in, so the union and district could fight for more state funds together.”

But John Vellardita, executive director of the Clark County Education Association, said he believes there will be a strong showing of community support if teachers strike.

The union has said that 78 percent of the more than 5,000 teachers who voted in a survey in May authorized a strike. And a recent poll of more than 400 voters found that 76 percent would support educators going on strike.

Those are people like Kenneth Love, a parent and retired district employee.

“I have to say that this is absolutely, absolutely irresponsible of CCSD, their treatment of the teachers,” said Love, who helps buy supplies for teachers at Darnell Elementary, where his son attends school.

Meanwhile, Bailey — the teacher who completed two master’s degrees — feels compelled to strike unless the district agrees to fully fund the professional development raises it promised. It would be ridiculous for him not to, he said, after spending all that time and money.

“I trusted the CCSD and I shouldn’t have, obviously at this point,” he said. “So I’ve got to dance with who I brought.”

^ Editor’s note: The story has been updated to correctly identify the National Education Association of Southern Nevada and to state that the school district may file for an injunction in court.