A woman who led Henderson officers on a short chase and struck a police vehicle Sunday morning has been arrested.

At about 9:30 a.m., Henderson police received reports of an intoxicated driver in the parking lot of a commercial building on the 800 block of Boulder Highway. Henderson police spokesman Rod Pena said the woman, who is in her 60s, took off in a white Toyota Camry Solara once officers arrived.

The 20-minute pursuit led officers to the 800 block of Purple Sage Terrace, near East Warm Springs Road, where she was taken into custody.

During the chase, Pena said the woman “appeared to have intentionally” crashed into a police vehicle. No officers were injured, he said. The suspect caused at least two other collisions before she was taken into custody at 9:50 a.m.

The preliminary investigation showed the woman was driving under the influence. Her exact charges weren’t immediately clear, but Pena said she will “probably face multiple charges.” 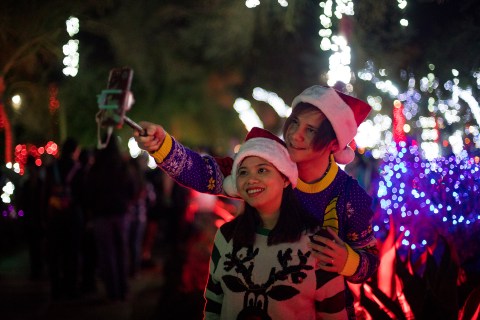 An annual Las Vegas Valley holiday tradition will go on this winter — with reservations.