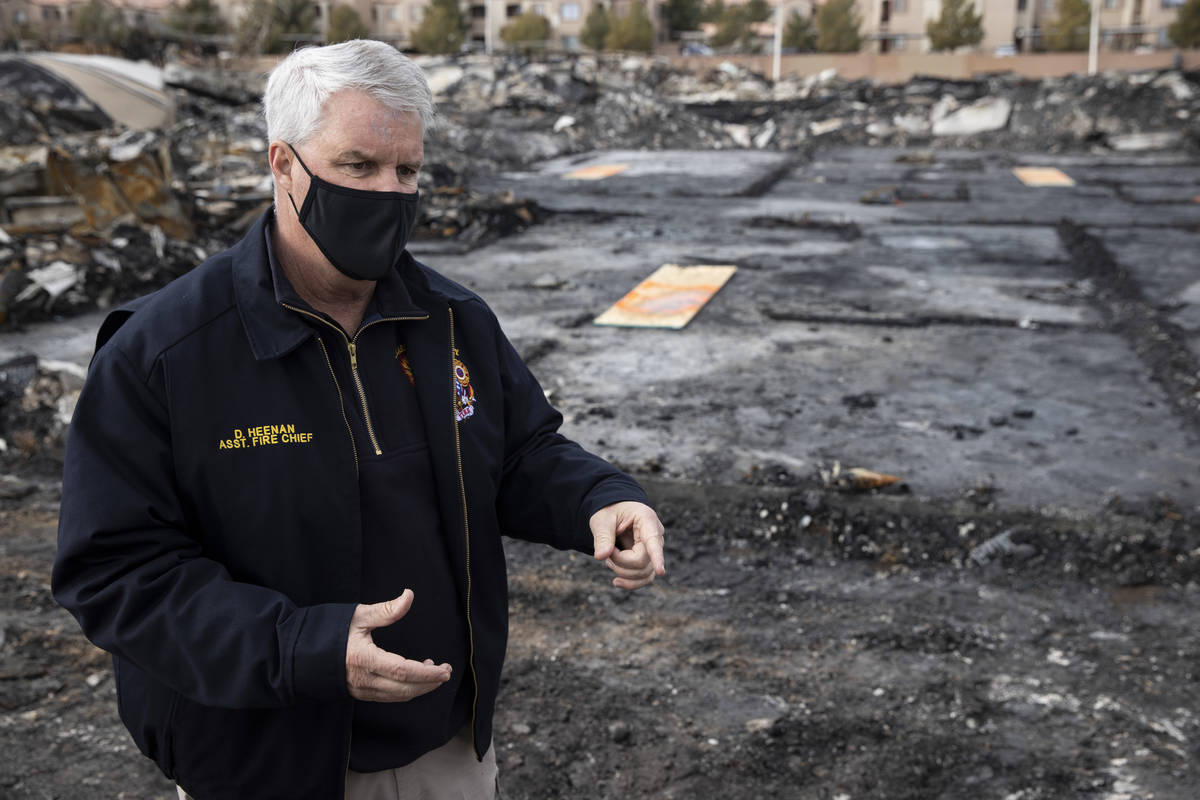 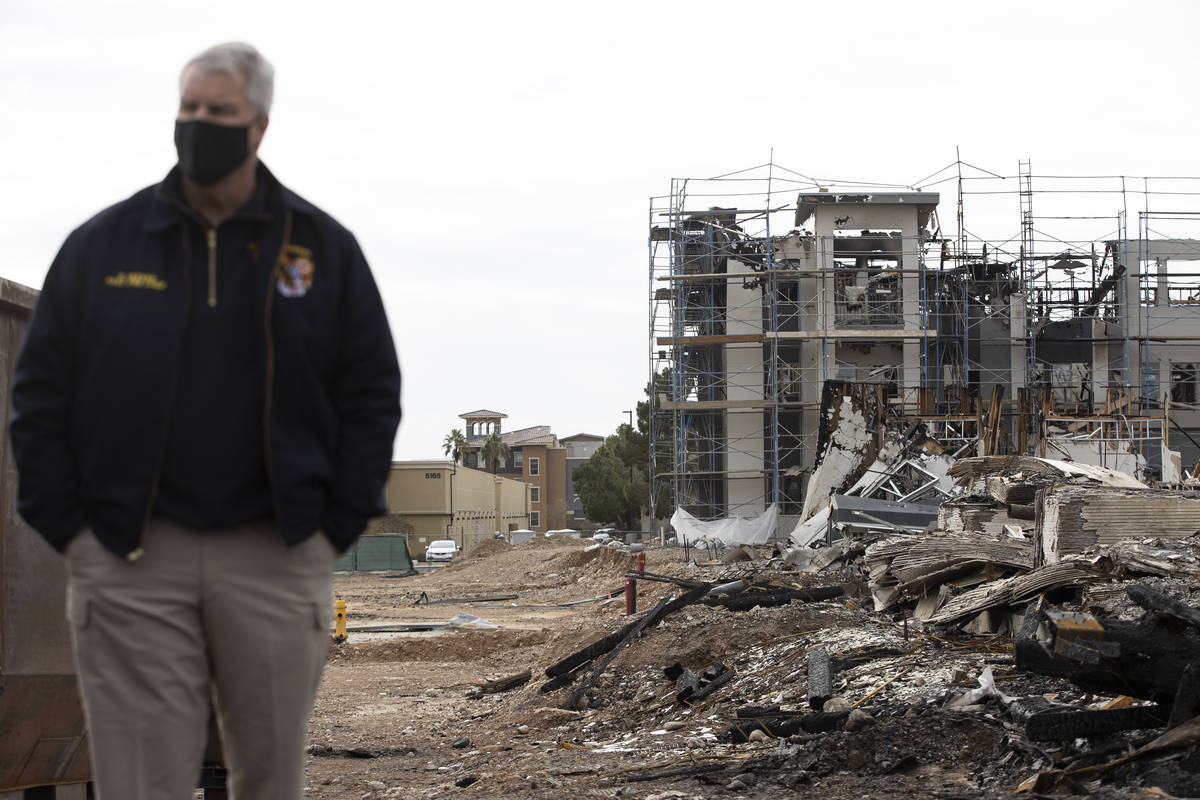 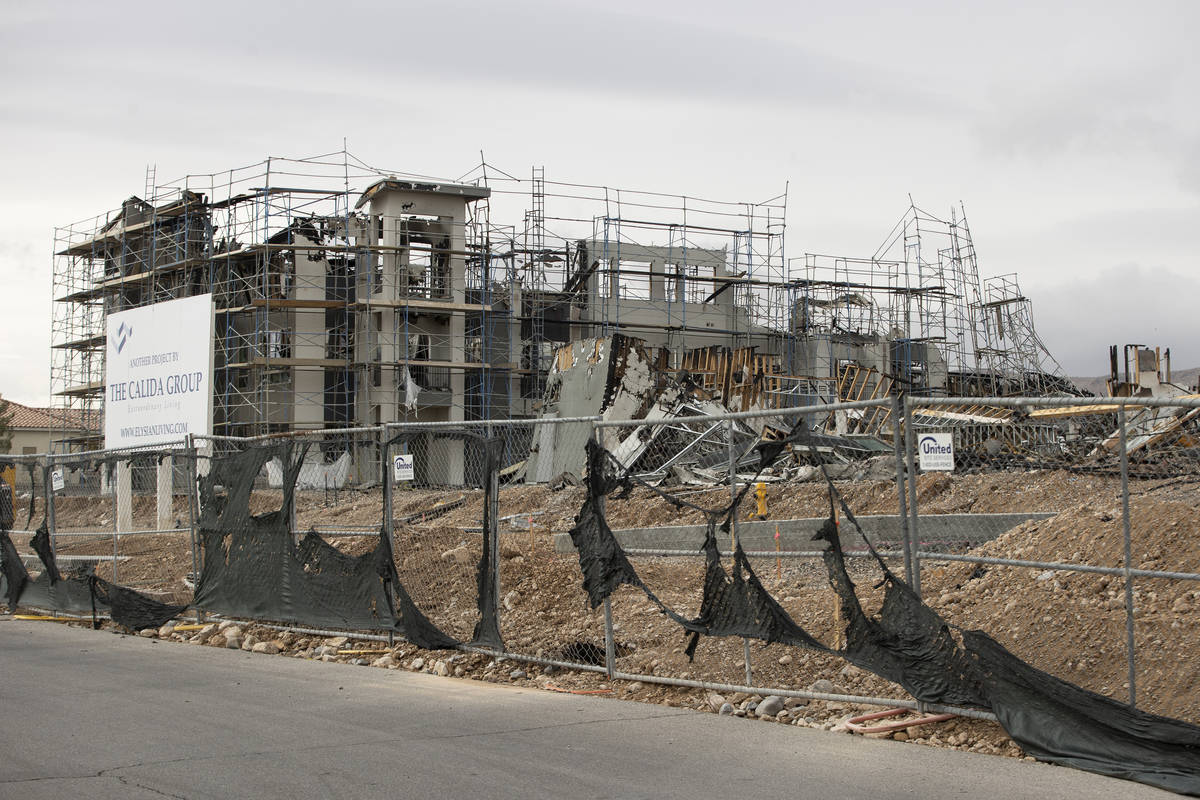 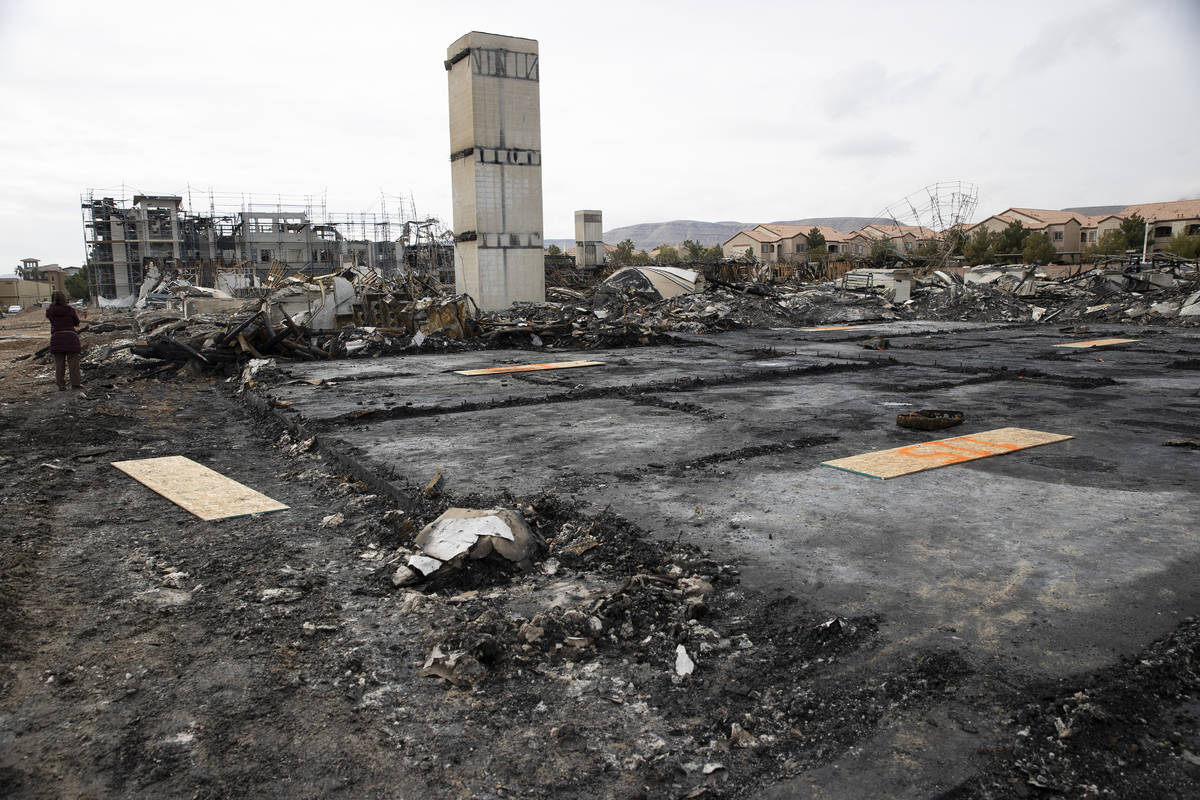 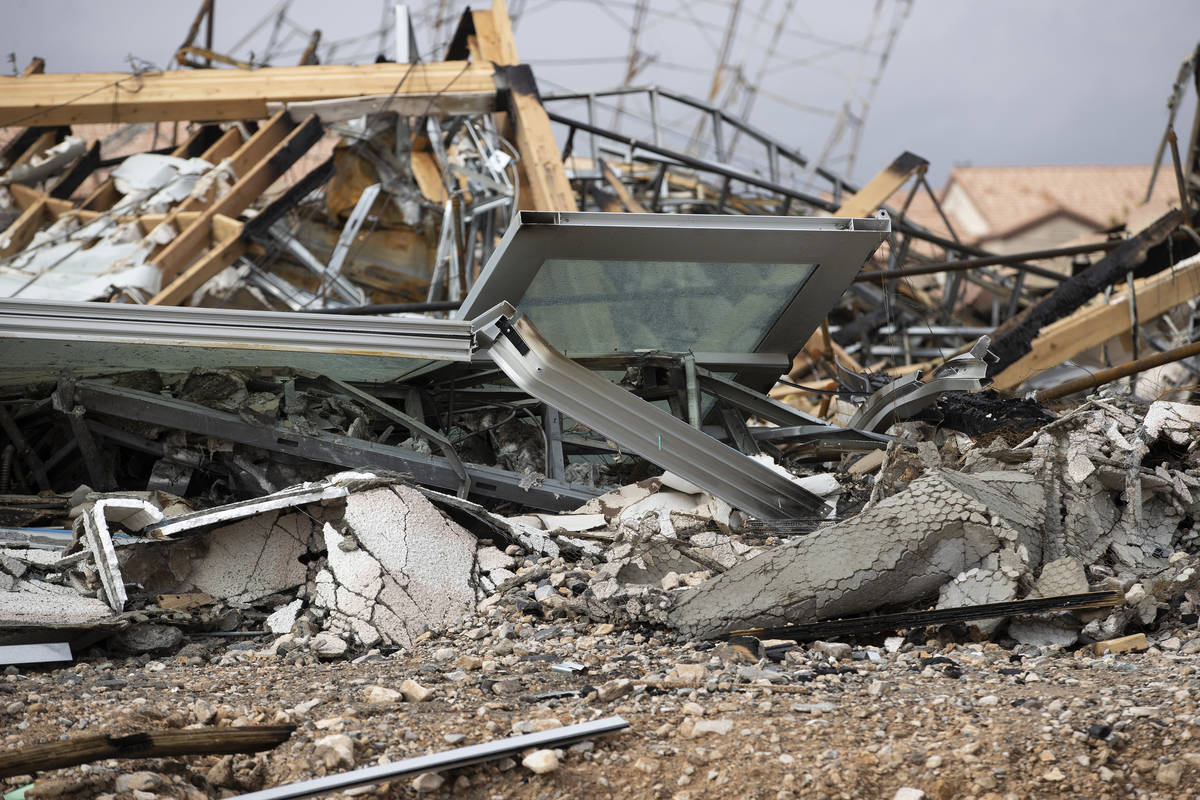 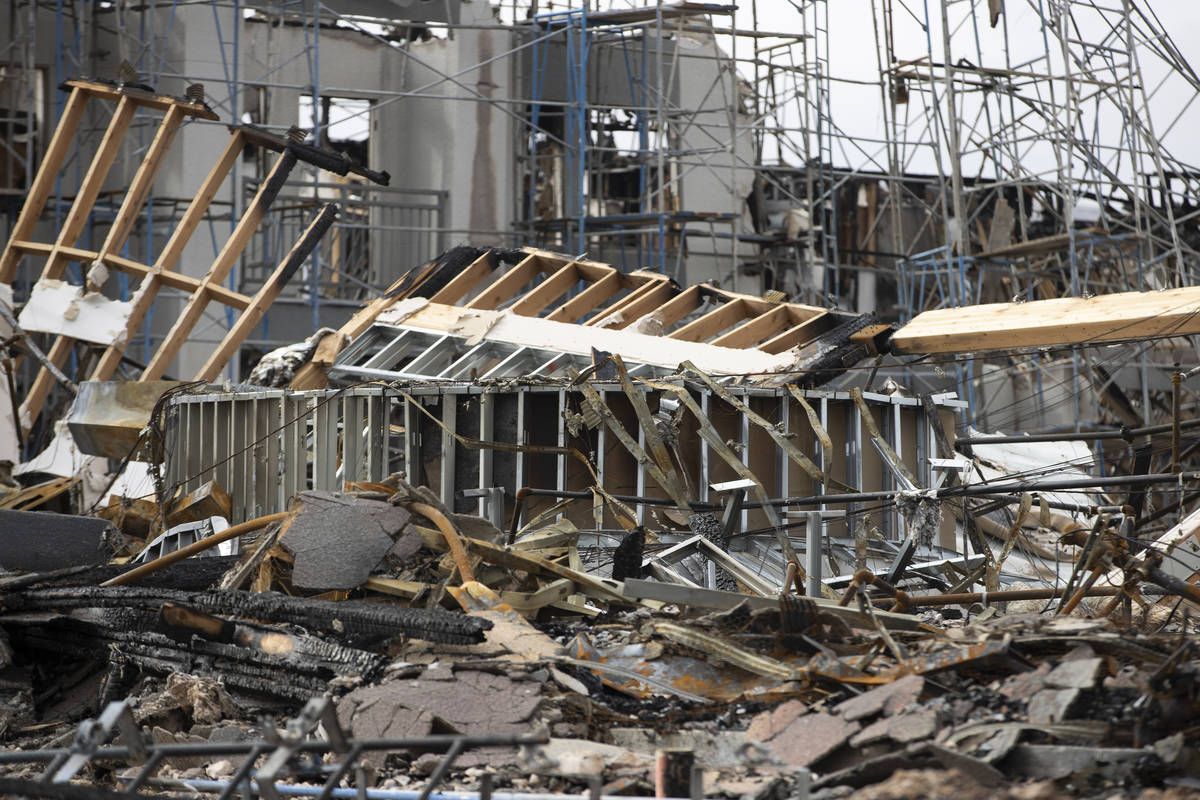 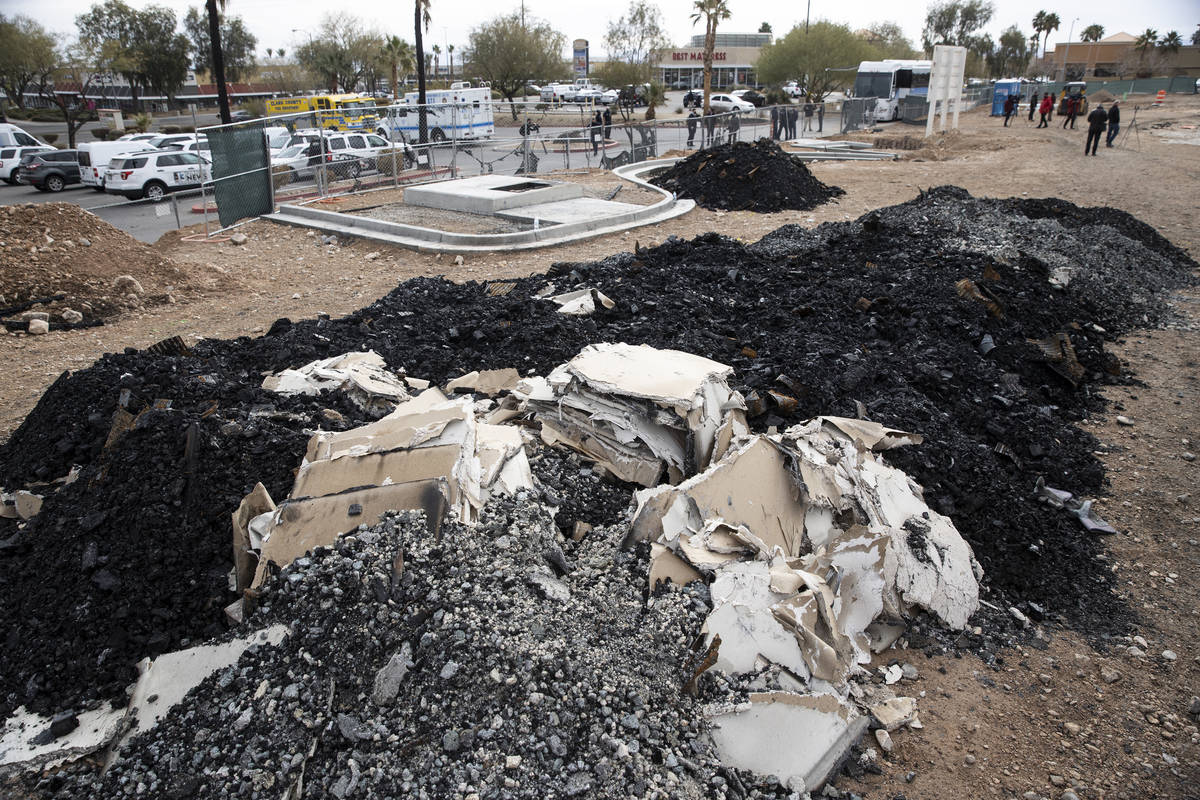 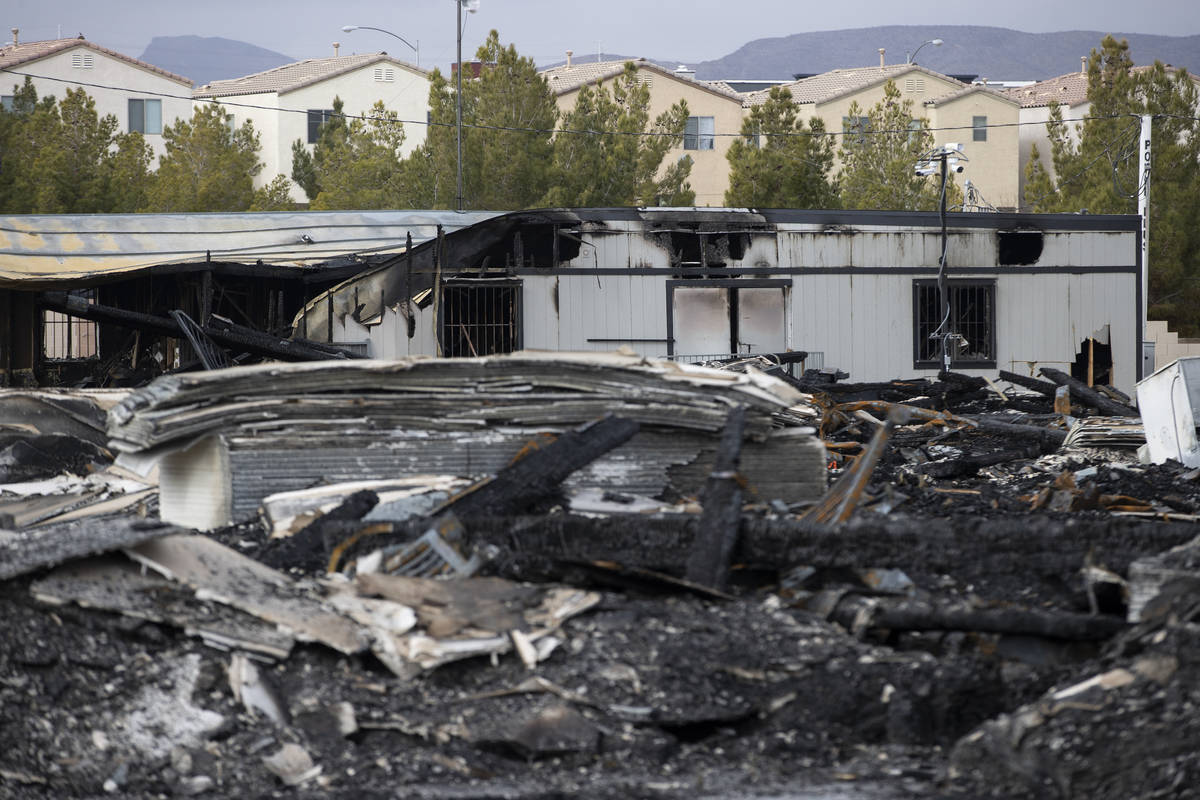 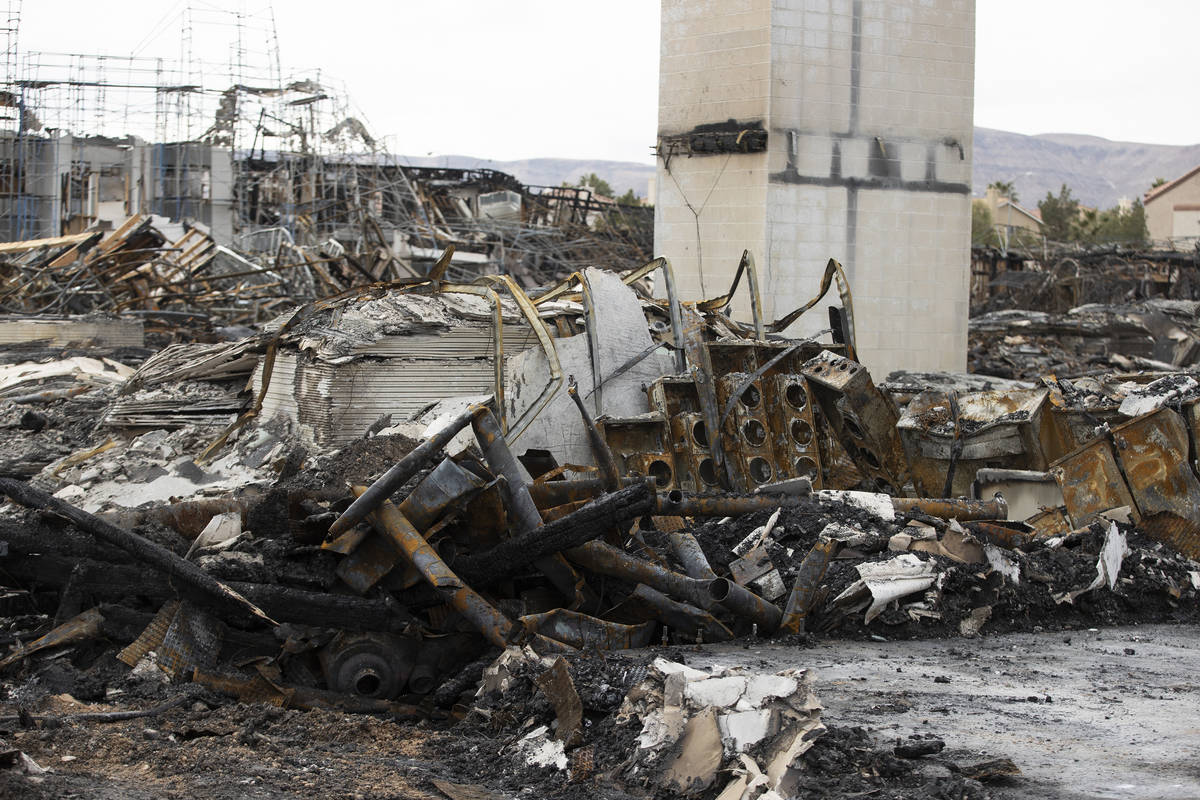 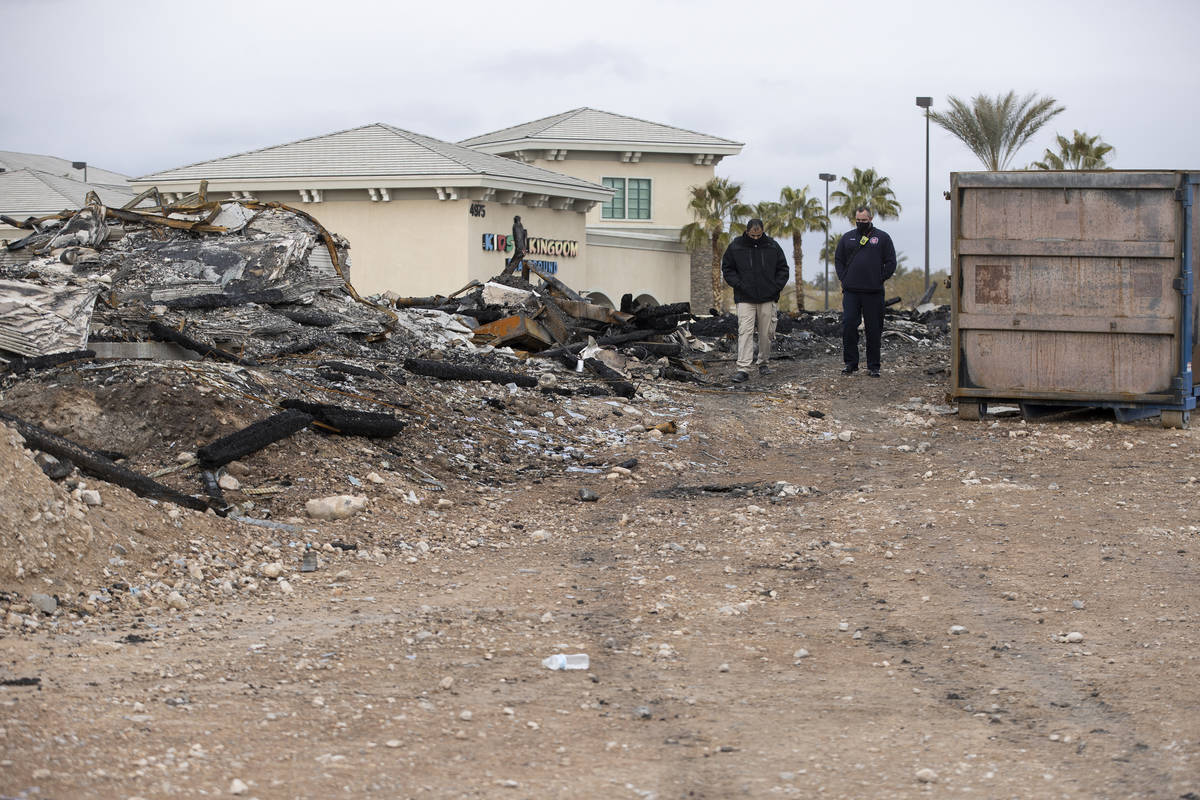 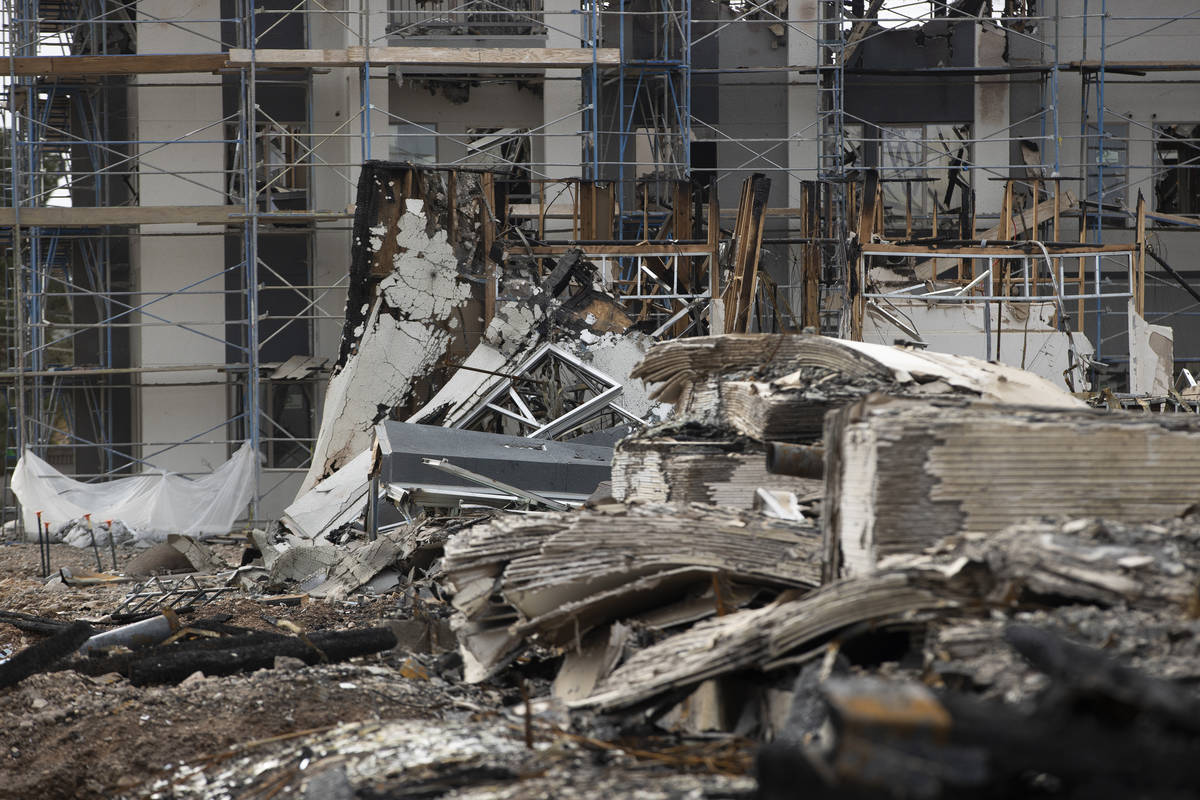 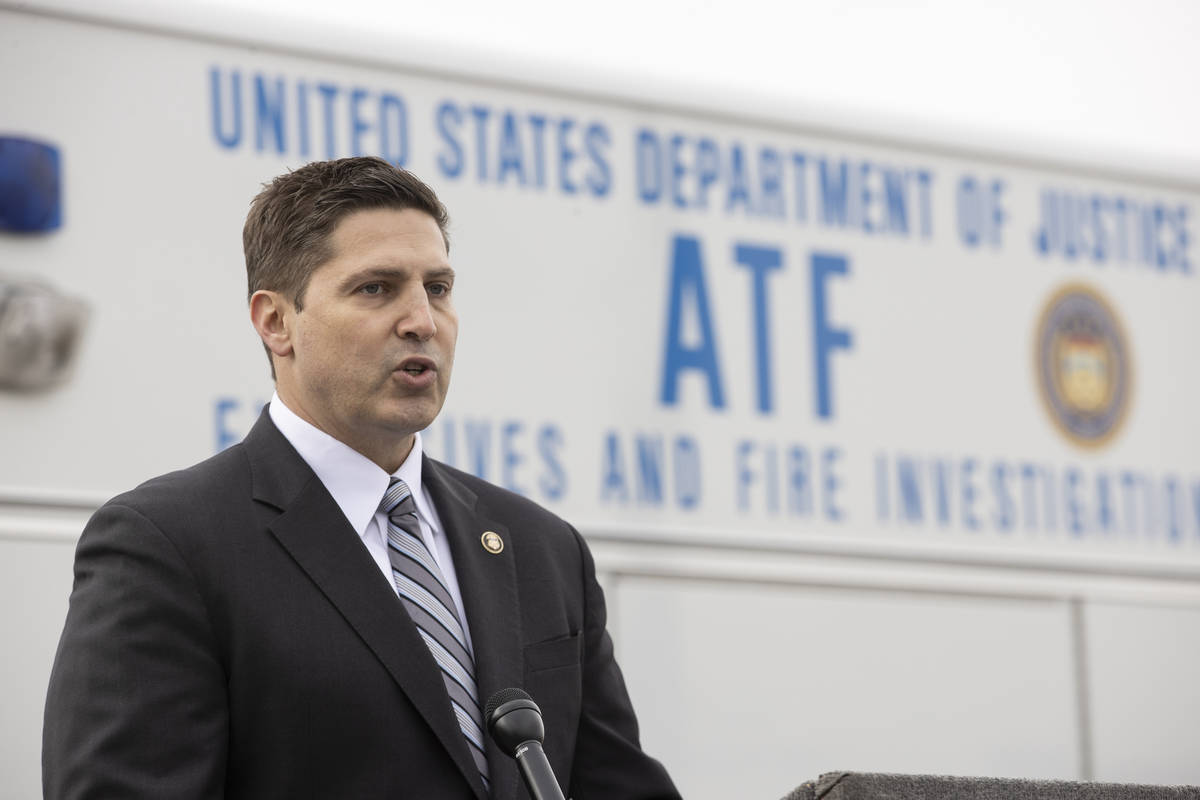 Patrick Gorman, agent in charge for the Bureau of Alcohol, Tobacco, Firearms and Explosives, speaks during a press conference on the Ely at Fort Apache complex fire investigation near the intersection of S Fort Apache Road and W Tropicana Avenue in Las Vegas, on Wednesday, Jan. 27, 2021. (Erik Verduzco / Las Vegas Review-Journal) @Erik_Verduzco 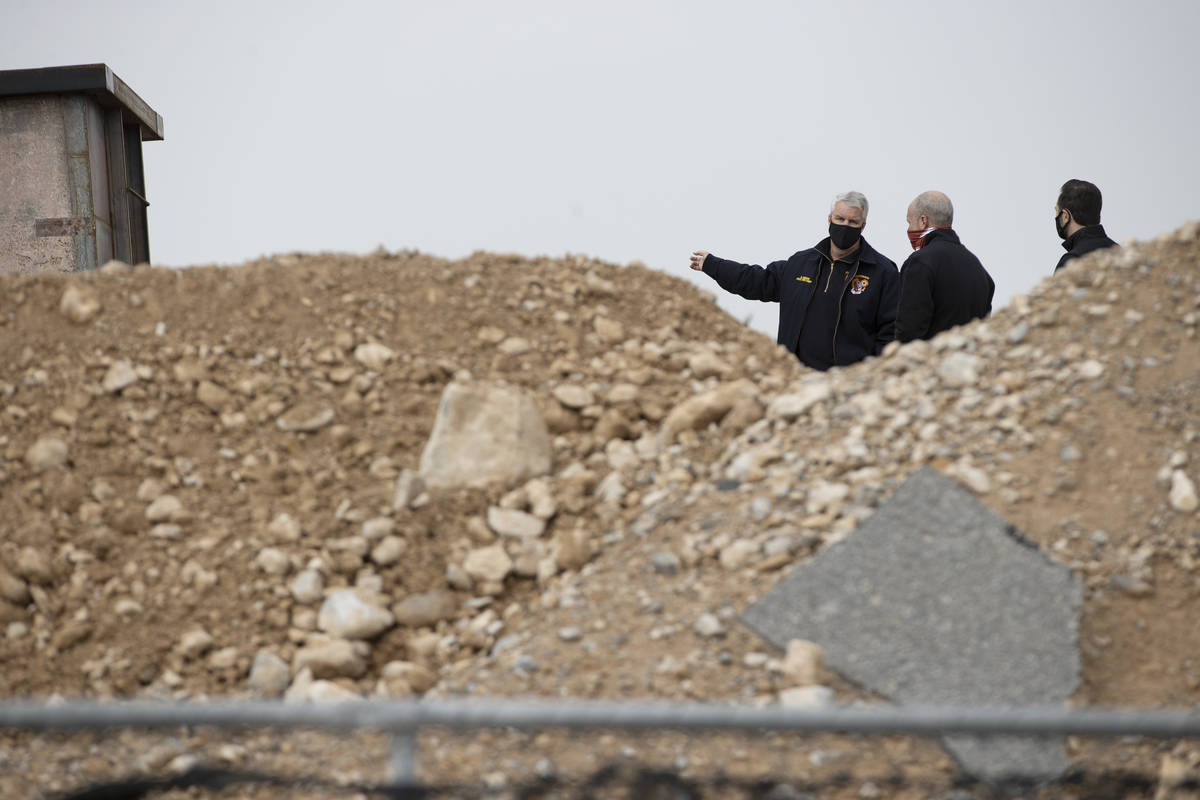 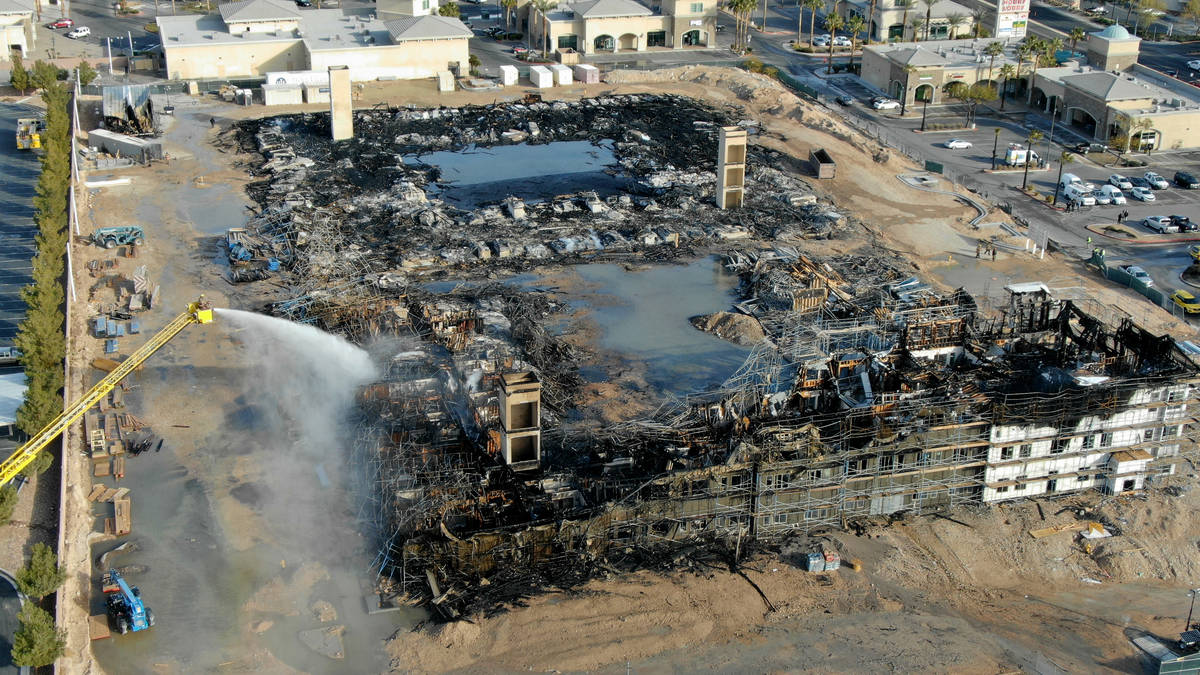 This Jan. 19, 2021, file photo shows an aerial view of the damage after an overnight fire at an under-construction apartment complex in southwest Las Vegas. (Michael Quine/Las Vegas Review-Journal) @Vegas88s 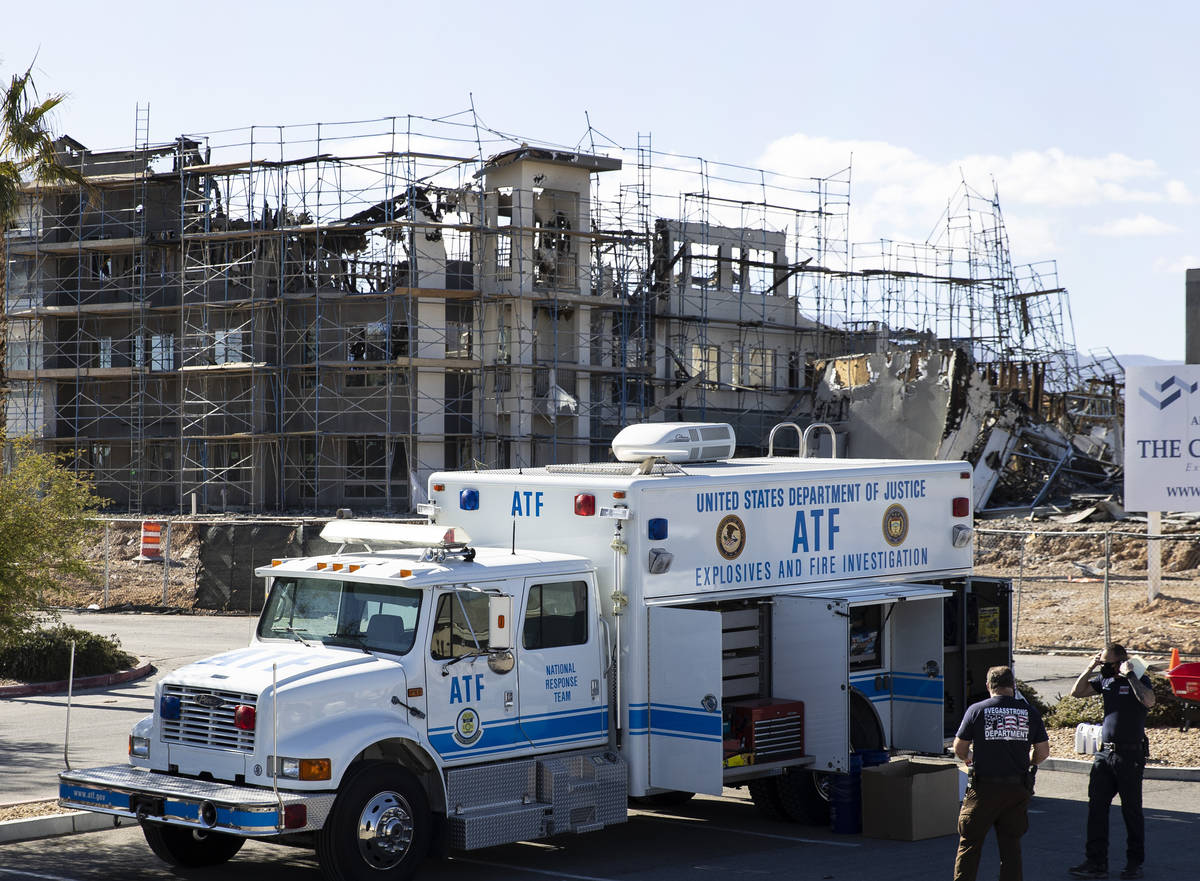 In this Jan. 21, 2021, file photo, a truck from Alcohol, Tobacco, Firearms and Explosives (ATF) is parked outside of the under construction Ely at Fort Apache apartment complex fire scene in Las Vegas. AFT is investigating the origin and cause of the fire. (Bizuayehu Tesfaye/Las Vegas Review-Journal) @bizutesfaye 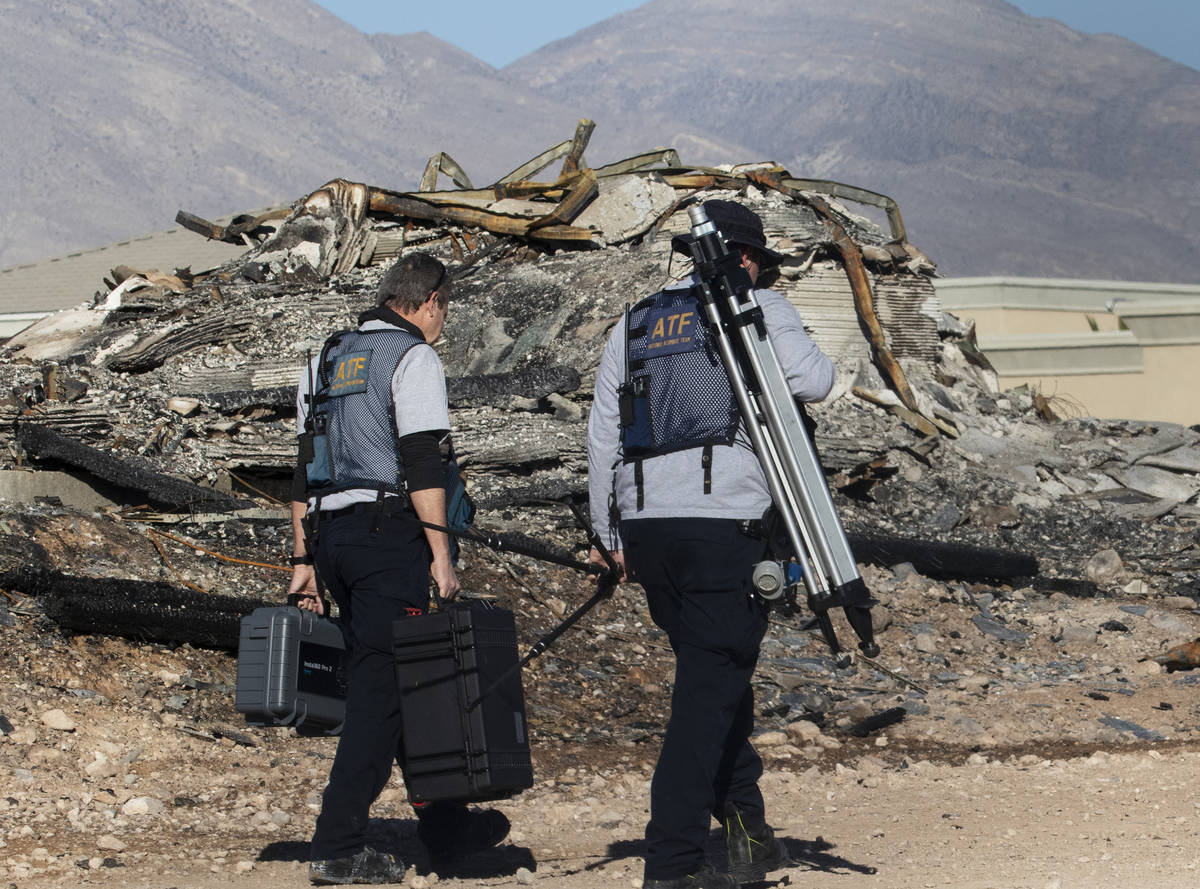 In this Jan. 21, 2021, file photo, a team of Alcohol, Tobacco, Firearms and Explosives (ATF) investigators arrive at the under construction Ely at Fort Apache apartment complex fire scene to investigate the origin and cause of the fire in Las Vegas. (Bizuayehu Tesfaye/Las Vegas Review-Journal) @bizutesfaye 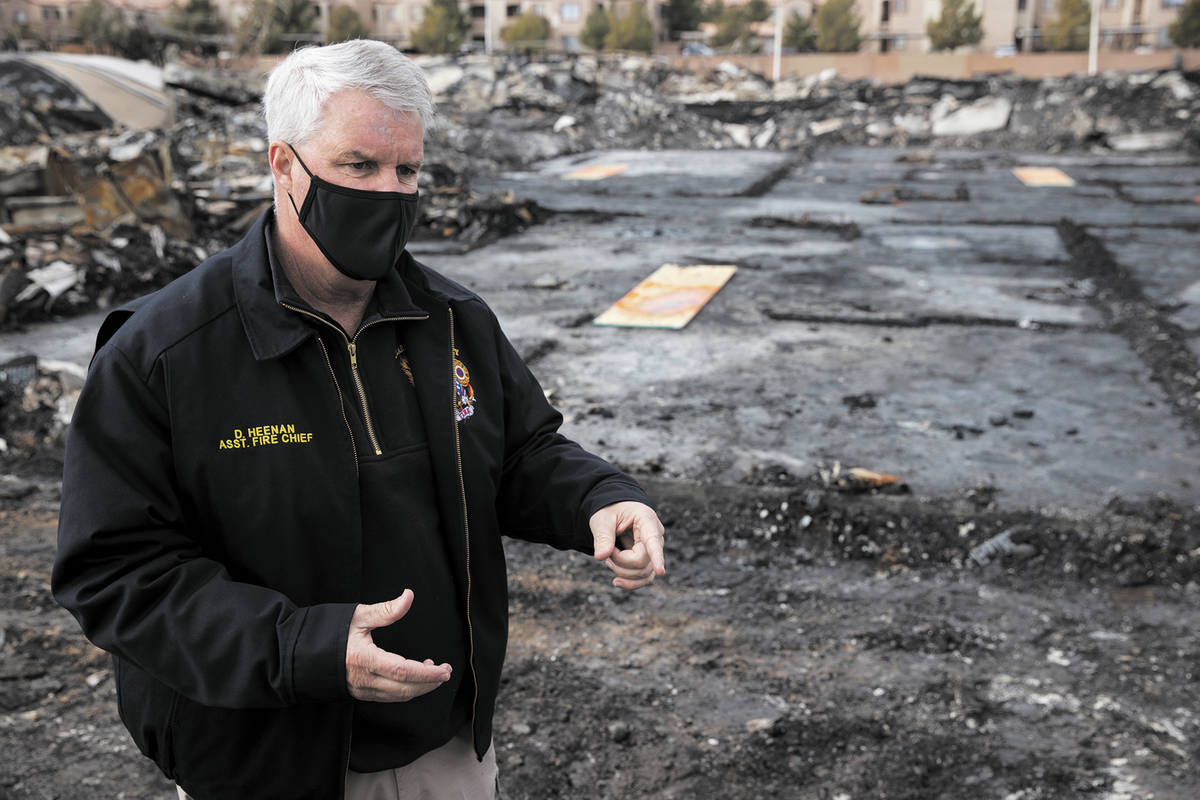 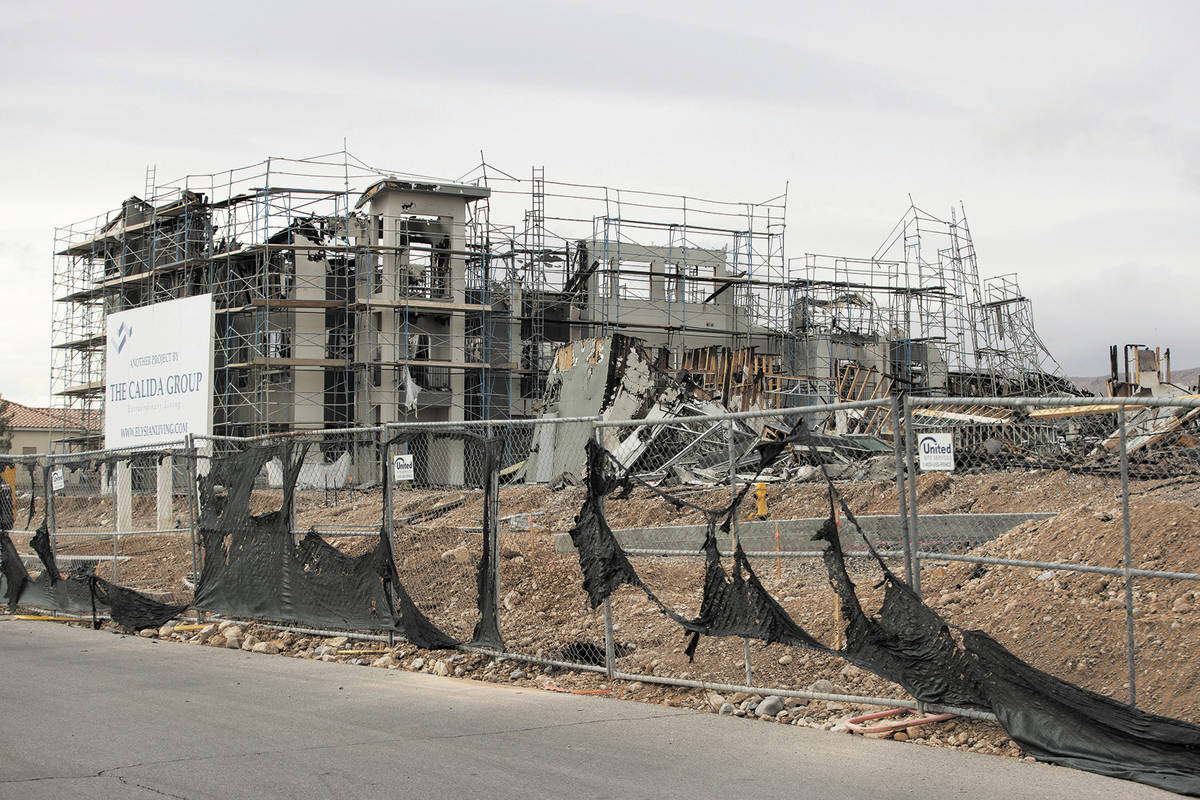 The Clark County Fire Department, along with the Bureau of Alcohol, Tobacco, Firearms and Explosives’ San Francisco Field Division, is investigating the fire that broke out at the Ely at Fort Apache apartment complex, 5055 S. Fort Apache Road. The federal agency is also offering a $10,000 reward for information on the person or people who may have started the blaze, which caused millions in damage.

“After examining the evidence, we have determined the cause of the fire on Jan. 18 to be incendiary, meaning it was intentionally set and is an act of arson,” said Special Agent in Charge Patrick Gorman, with the San Francisco Field Division, during a news briefing Wednesday outside the burned construction site.

The colossal fire at the 206-unit complex started just before midnight Jan. 18, then burned well into the following day, damaging three buildings in various stages of construction. Officials on Wednesday declined to say where in the under-construction building the fire started, or how investigators determined the cause was arson.

“Arson is a dangerous act of violence posing a significant threat to the community,” Gorman said. “The fire caused extensive damage and could have tragically resulted in serious injury or loss of life.”

The smell of smoke was gone from the construction site on Wednesday morning, but the structures that remained were dilapidated and scorched. Melted scaffolding stood at the far end of the site, and sorted piles of black debris marked different rooms in the three-story building that was no longer standing.

The fire caused up to $35 million in damage. The Clark County Fire Department requested the help of the ATF’s National Response Team because of the investigation’s size, Deputy Fire Chief Warren Whitney said.

Although the ATF has finished physically investigating the scene, Whitney said authorities are still working to “present a prosecutable case to the U.S. attorney’s office.”

Assistant Fire Chief Dan Heenan said the fire’s scale was due to windy weather and the phase of construction the complex was in.

“There was no drywall on the walls, and the drywall (has) an incredible fire-resistant capacity,” he said. “Without that, then there’s just a lot of oxygen, a lot of fuel, and it was three stories high, so it got going.”

He said federal authorities are involved in the investigation because the fire affected interstate commerce, in part because people from other states could have moved into the apartments, and because the building company is not based in Nevada.

The apartment complex was about 50 percent complete before it caught fire. Wind-driven embers started other fires within a half-mile radius and forced the evacuation of adjacent neighborhoods and apartments, firefighters said. The three-alarm blaze was battled by nearly 100 firefighters from different departments throughout the valley.

The apartment complex was being built by The Calida Group, one of Las Vegas’ biggest apartment developers. According to a Wednesday statement from Jared Weinstock, Calida’s chief operating officer, the firm has no information about who may have been responsible for the fire but will continue to work closely with authorities.

“We want to, again, thank the first responders who not only contained the fire but also ensured that no one was injured,” the statement read.

Anyone with information about the fire can contact the ATF by calling 888-ATF-FIRE, emailing ATFtips@atf.gov or visiting www.reportit.com.