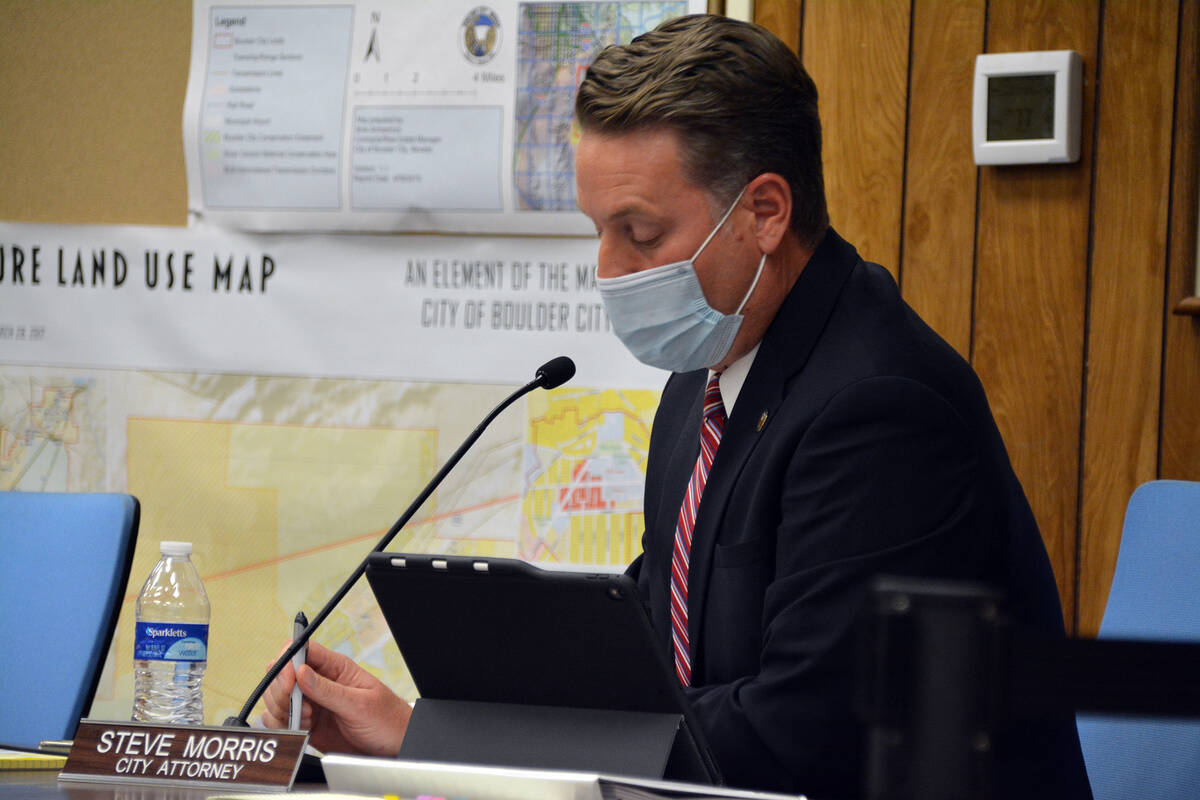 A former Boulder City attorney this month sued the city, alleging he was improperly fired in 2020 after he participated in an independent investigation of the then-mayor.

The city had retained outside counsel to probe allegations that then-Mayor Kiernan McManus had engaged in “discrimination, harassment, bullying, and creating a hostile work environment” against multiple city employees, according to the lawsuit filed in Clark County District Court.

The former city attorney, Steve Morris, who claimed to be subject of religious discrimination himself because of his membership in the Church of Jesus Christ of Latter-day Saints, was asked by the outside firm to testify in the investigation as a witness.

“Mr. Morris agreed to participate in the investigation and provided information regarding alleged discriminatory conduct by Mayor McManus which he had personally observed and experienced,” the lawsuit said. He also alleged misconduct from then-Councilwoman Tracy Folda, whom the mayor had appointed to an open seat.

“The City is hopeful to have these matters resolved in the near future,” Boulder City Attorney Brittany Walker wrote in a statement to the Review-Journal.

The lawsuit alleges McManus, along with the rest of the council, were members of a Facebook group co-founded by Folda known as the Boulder City Community Alliance. The mayor had signed a “loyalty pledge.”

Group members discussed “changing the politics.” But, according to the lawsuit, bigotry festered within the online discussions.

“Many of the bigoted and discriminatory emails and online posts were directed towards Mr. Morris in his role as City Attorney and the fact that Mr. Morris held a voluntary leadership position in his Church,” according to the lawsuit.

The harassment leaked into public comment at City Council meetings, and the lawmakers did nothing to tamper them down despite having a policy that didn’t allow speakers to target specific employees. McManus, according to the suit, “even did so himself.”

Six days after the interview with the firm probing allegations against McManus, in which Morris “substantiated a series of allegations,” according to the lawsuit, he received a letter informing him that the City Council was holding a meeting, where lawmakers were going to discuss his “character, alleged misconduct, or professional competence,” the agenda item said.

By that time, Morris, hired in 2018, had a clean employment record, according to the court filing. The action violated the state’s Open Meeting Law by not providing proper public notice, the lawsuit charges.

Morris sought legal recourse and the agenda item was removed. However, it wasn’t long before the city sent him a similar, second letter.

This time, despite attorneys informing the city that that, too, violated, the Open Meeting Law, Boulder City proceeded in October 2020 to fire Morris and then-City Manager Al Noyola, who had also alleged discrimination.

They were not provided the severance pay they had negotiated in their hiring contract, and later sued.

Boulder City offered to settle with Morris and Noyola in 2021, with the condition that they would end their legal action without being able to re-file the case in the future, according to the Boulder City Review.

Earlier this year, the Nevada Commission on Ethics ruled that Morris did not violate ethics law, and that he was the victim of retaliatory behavior by McManus and others, the Boulder City newspaper reported. The ethics complaint had been filed by McManus and Folda.

Noyola also was cleared to sue this summer, according to the Boulder City Review.