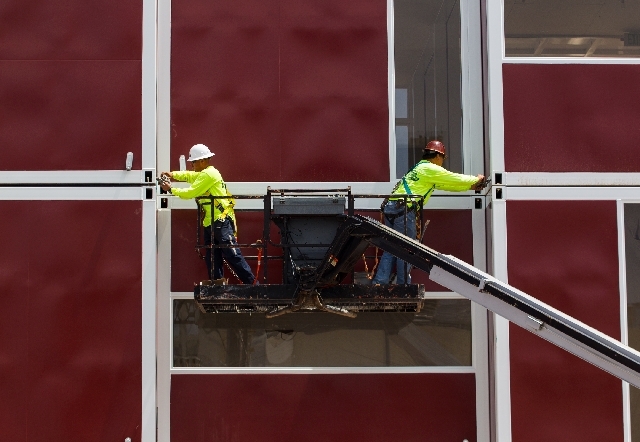 Construction workers make progress at the Container Park off of Seventh Street near the El Cortez in downtown Las Vegas on Tuesday.

A centerpiece in Zappos CEO Tony Hsieh’s Downtown Project moved forward Tuesday despite concerns it could expose teenagers and children to alcohol and booze-fueled activities.

The Las Vegas City Council’s recommending committee voted 2-1 in favor of an ordinance that would pave the way for the Container Park, a shopping and lifestyle center that combines access to bars and restaurants with a playground where parents can send their kids.

The vote, with Councilman Ricki Barlow voting against, was to approve an ordinance that would set the rules for the Container Park and others like it to let patrons drink alcoholic beverages in common areas between the stores, restaurants and bars planned inside the project. Individual businesses inside the project that want to serve alcohol would still need to get their own licenses.

The vote sends the proposed ordinance on to the City Council, which is scheduled to consider it Aug. 7.

Backers said the ordinance, which sets rules for what’s defined as an outdoor entertainment complex, is an important step for Las Vegas to keep up with consumer demands for mixed-used developments in which people can shop, eat, drink, be entertained and bring their children.

Others, however, questioned why developers of the Container Park would even propose a project that incorporates a play area for children to a spot on Fremont Street that’s enjoying an economic renaissance due to an influx of bars, clubs, restaurants and events aimed at adults.

“I believe the children’s park element should be removed and replaced with something more adult-like,” Barlow said. “We all know how adults get when they have a little bit too much liquor in their system.”

The Container Park, under construction at Fremont and Seventh streets, is among the highest profile proposals to date from the Downtown Project, a $350 million urban renewal project backed by Hsieh.

It was originally planned to provide temporary space to new businesses in the form of recycled steel shipping containers. But as the proposal advanced the plans grew more elaborate and now include new fabricated structures made to resemble the containers.

It also includes attention-grabbing features such as a giant, flame-spewing preying mantis sculpture originally built for the Burning Man festival in Northern Nevada.

In addition to the prospect of play area within eye and earshot of adult drinking fun, others questioned whether the Container Park would become a place for teenagers to congregate and access alcohol. They pointed out the development site is near an area of Fremont Street that’s already struggling with an underage drinking problem and Las Vegas Academy, a downtown high school with hundreds of teenagers who would be tempted to visit the Container Park.

Diane Anderson, Southern Nevada coordinator with the group Enforcing Underage Drinking Laws, compared the proposed setup at the Container Park to Electric Daisy Carnival, the music event at the Las Vegas Speedway that allows underage people to attend but also provides access to alcohol for people who are over 21.

“Those have been the most challenging to try to control. We have a major problem there,” Anderson said.

She asked the committee to take more time crafting the ordinance to include more anti-underage drinking safeguards.

“We have a problem down there I think we need to control or try to get more control of before we open Container Park,” Anderson said.

Coffin, however, noted that sending the ordinance back for more work could delay the project. He and Mayor Pro Tem Stavros Anthony, who also voted to approve the ordinance, said potential health and safety issues could be dealt with during the licensing process.

Even if the ordinance is approved by the council, the builders will still need to get a tavern license, which needs approval from city staff and the council.

Las Vegas police, the anti-underage drinking group and others with concerns will be heard in the licensing process, which is where the city staff can add requirements for the license holder to maintain adequate security for the project as well as robust barriers between underage people and alcohol.

“What this really comes down to is the security plan that is put in place to make sure what they’re talking about doesn’t happen,” Anthony said.

In a written statement about the issue Kim Schaefer, a spokeswoman for Downtown Project, described how the backers expect the project will look.

“We envision the Downtown Container Park to feel much like a weekend backyard barbecue by the pool, where friends and family and kids all interact. The adults may enjoy a beer or two, while the kids are running around playing and being kids,” she wrote.

Deputy City Attorney James Lewis also noted the ordinance would allow Karen Duddlesten, the city licensing manager, to issue a 90-day temporary license, which he described as an added layer of accountability.

Jennifer Roberts, an attorney for Lionel Sawyer Collins who was representing the Container Park, said the plan will include safeguards to keep alcohol away from young people.

“There is absolutely no plan that alcohol will be in any playground area,” she said.