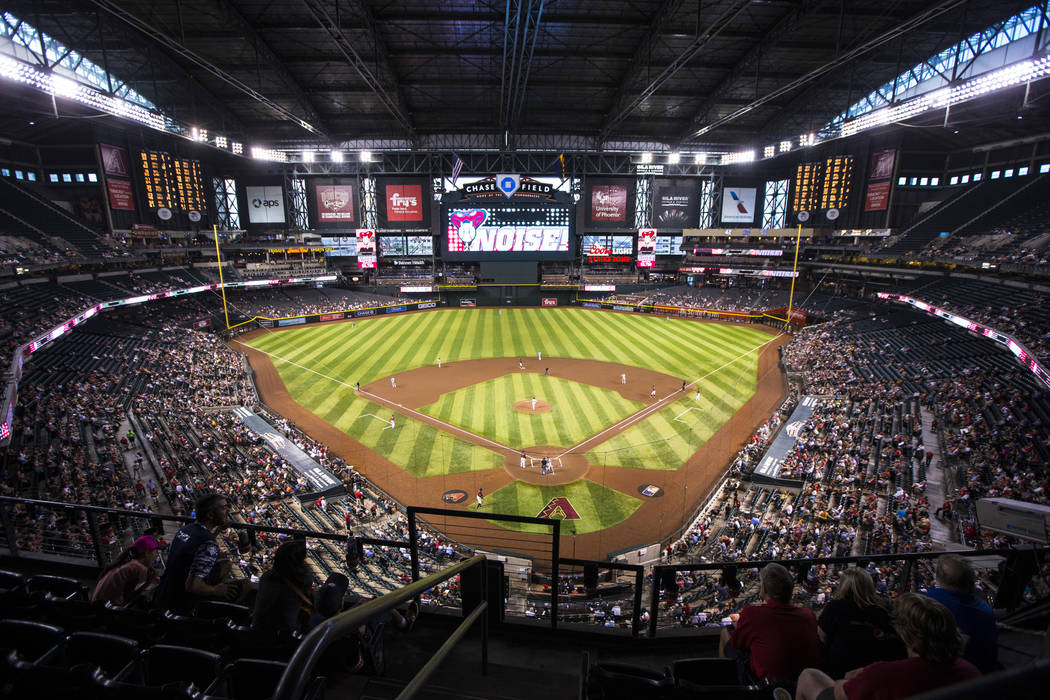 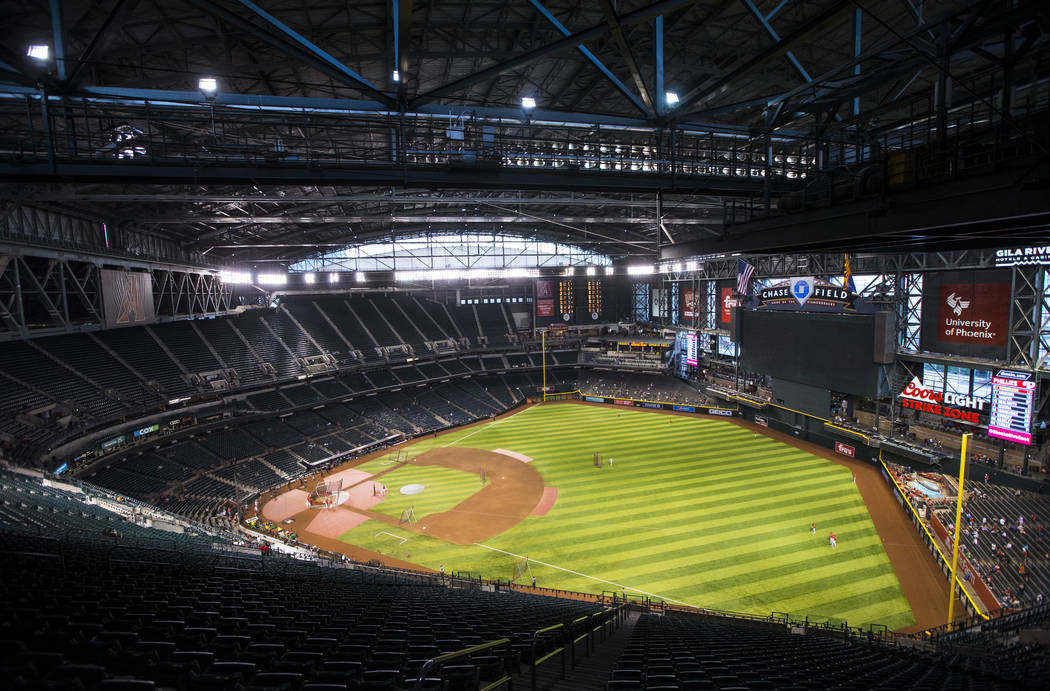 A view of Chase Field before the start of an Arizona Diamondbacks baseball game against the Philadelphia Phillies in Phoenix, Aug. 7, 2019. (Chase Stevens/Las Vegas Review-Journal) @csstevensphoto

Members of the Arizona Diamondbacks stand for the national anthem before playing the Philadelphia Phillies in a baseball game at Chase Field in Phoenix, Aug. 7, 2019. (Chase Stevens/Las Vegas Review-Journal) @csstevensphoto

The Arizona Diamondbacks signed a nondisclosure agreement with the city of Las Vegas more than a year ago, suggesting that Nevada’s largest city might have followed the city of Henderson in discussing the Major League Baseball team’s potential relocation from Phoenix.

It is unclear exactly how far discussions have advanced between Las Vegas and the Diamondbacks or whether those talks are ongoing. The nondisclosure agreement indicated both parties were evaluating or pursuing “certain mutually beneficial opportunities.”

The agreement between the city of Las Vegas and the Diamondbacks was executed Aug. 14, 2018, according to a copy obtained by the Review-Journal.

It was signed just two weeks after the club signed a nondisclosure agreement with the city of Henderson, which proposed an estimated $1 billion ballpark for the Diamondbacks, the Review-Journal reported last month.

But any formal proposal that Las Vegas might have pitched was being kept confidential. Bill Arent, the city’s economic development director, notified the Diamondbacks of a public records request filed by the Review-Journal seeking electronic communications between the two sides. In a letter to Arent on Tuesday, the Diamondbacks requested the city not disclose such communications, citing a Nevada statute that calls for a city-formed economic development agency to keep records confidential at the request of a client.

The team has expressed a desire to remain in Arizona and improve Chase Field, the downtown Phoenix stadium that has been the team’s home since its opening season in 1998. But the Diamondbacks have not shut the door on relocation, reiterating the possibility in Tuesday’s letter and in a statement Thursday.

“We’re focused on Arizona and a local solution and have not made any determination on the future stadium site for the Diamondbacks,” a team spokesperson said.

The city of Las Vegas views itself as a professional sports town, and Mayor Carolyn Goodman has made it clear she wants the city to have a franchise in every major sports league. Her husband, Oscar Goodman, who preceded her as mayor, had similar goals. The city is in talks with a developer about a new stadium near downtown as it pursues a Major League Soccer expansion franchise.

Southern Nevada already has a National Hockey League franchise, the Vegas Golden Knights, and a WNBA team, the Las Vegas Aces. The NFL’s Oakland Raiders will move into a new domed stadium in Las Vegas next year.

“Would we take Major League Baseball? Sure,” Goodman said in a phone interview. “It’s just a matter of time.”

But she also warned against exaggerating progress, calling herself “results-oriented” while also saying she believes Arizona wants to keep the Diamondbacks.

“Conversations are great, but I am a bottom-line person,” she said. “Everybody can hype it, ‘This may happen,’ but I don’t talk ‘may.’”

Goodman also struck a cautious tone, given the city’s history of being used as leverage by major sports franchises.

“We are not going to be a bargaining chip for entities private to … use us to get a better deal to go where they think they might want to be,” she said.

Arizona Diamondbacks not shutting the door on Southern Nevada