This is part of our ongoing remembrance of the Oct. 1, 2017, shooting at the Route 91 Harvest Festival.


See all of our coverage here. 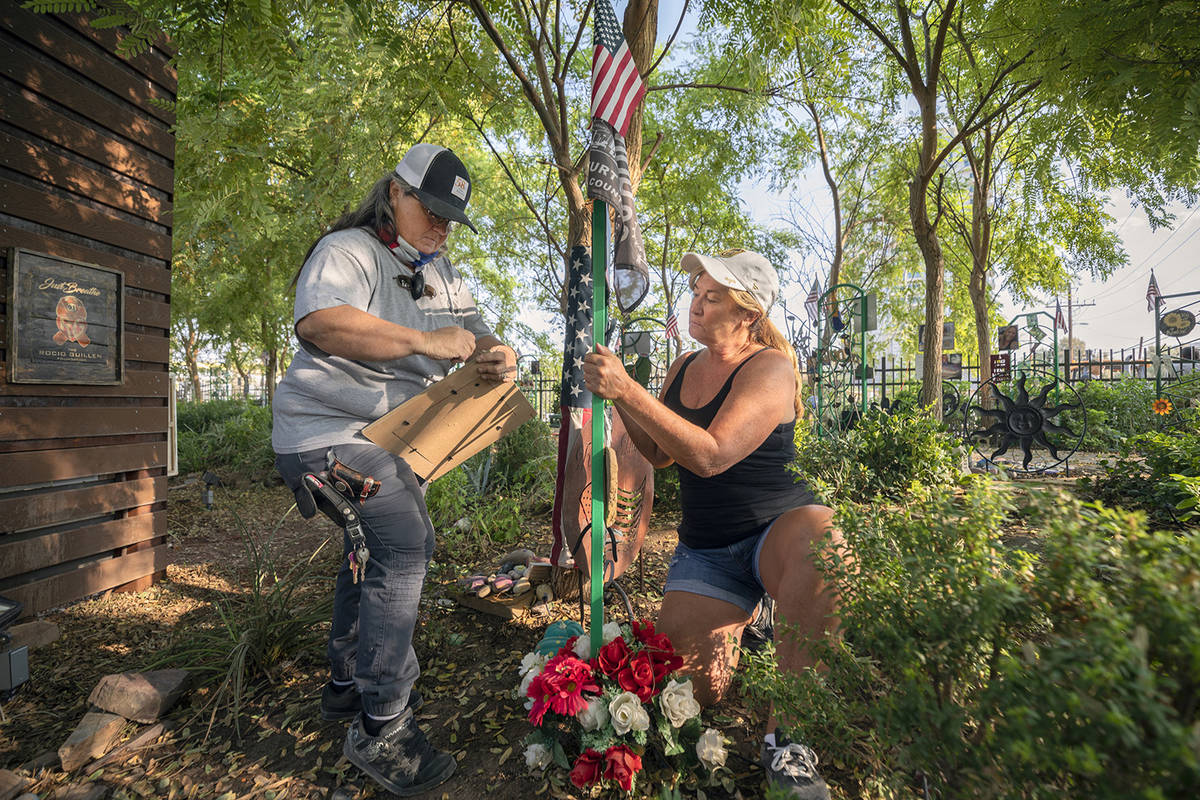 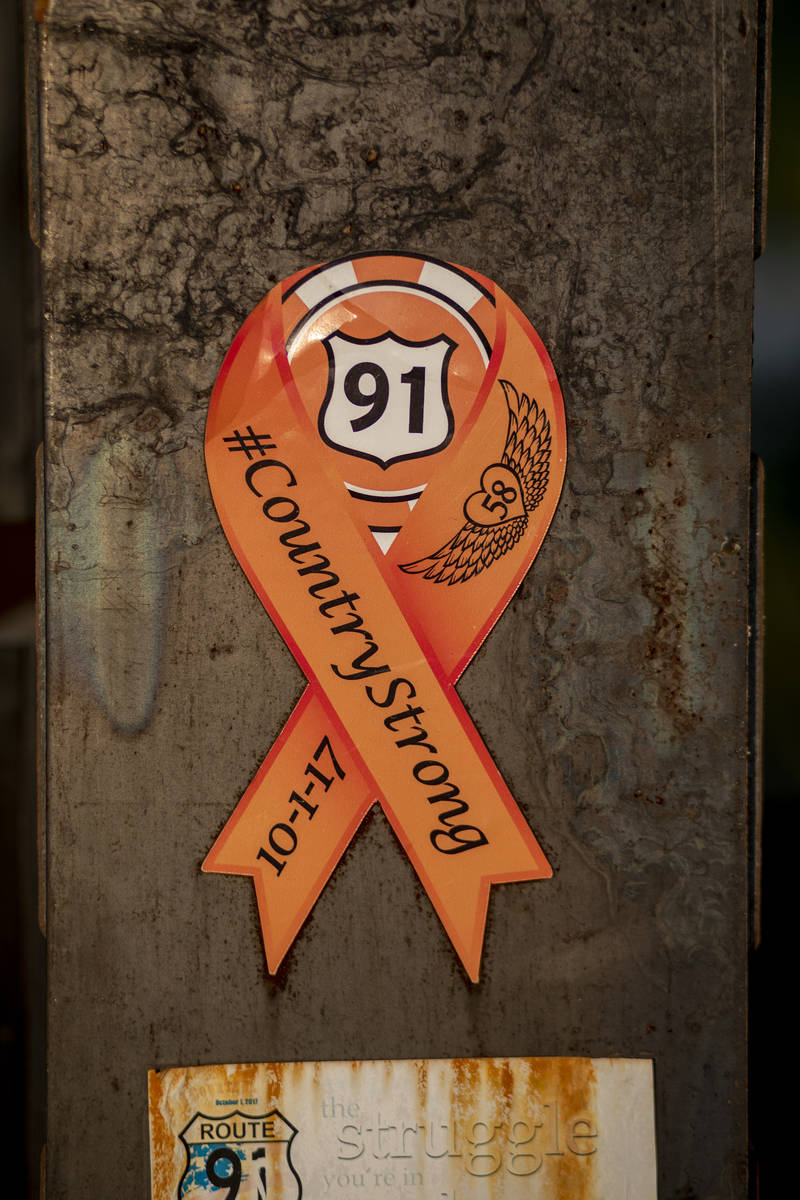 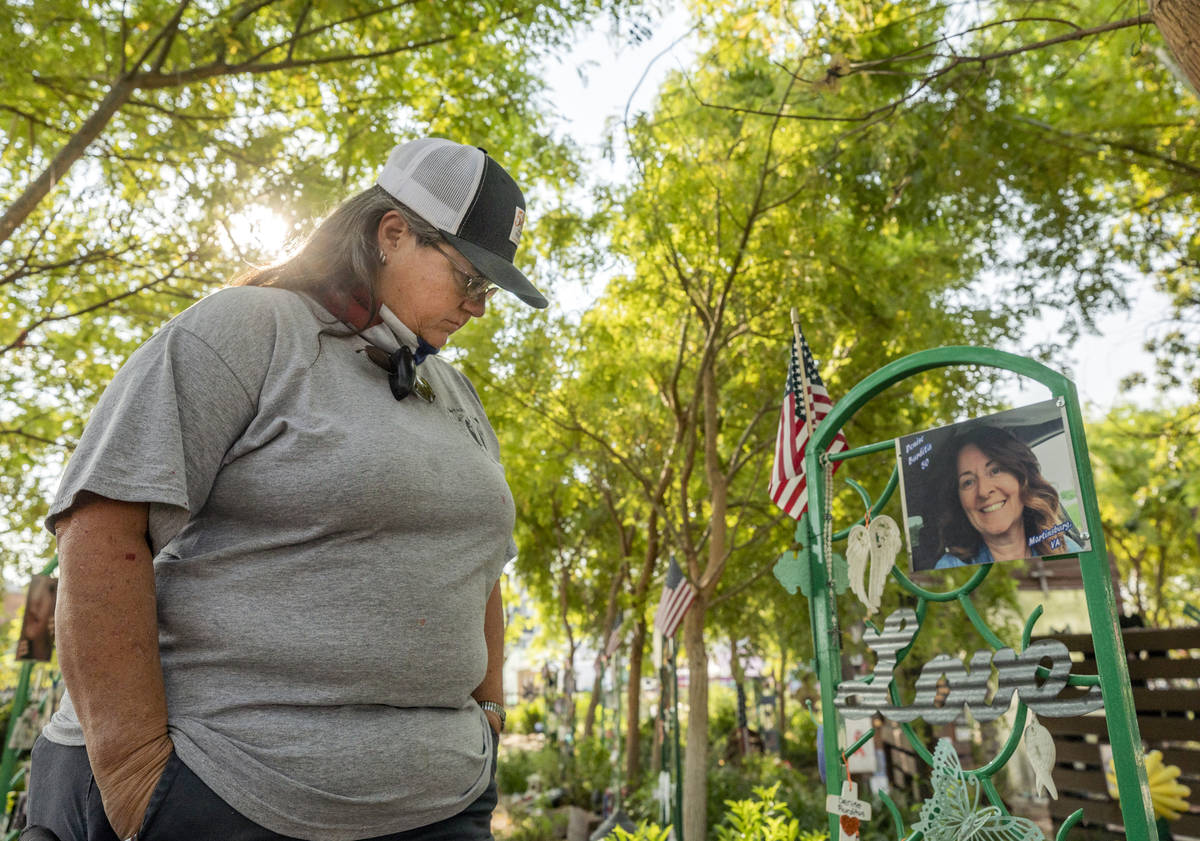 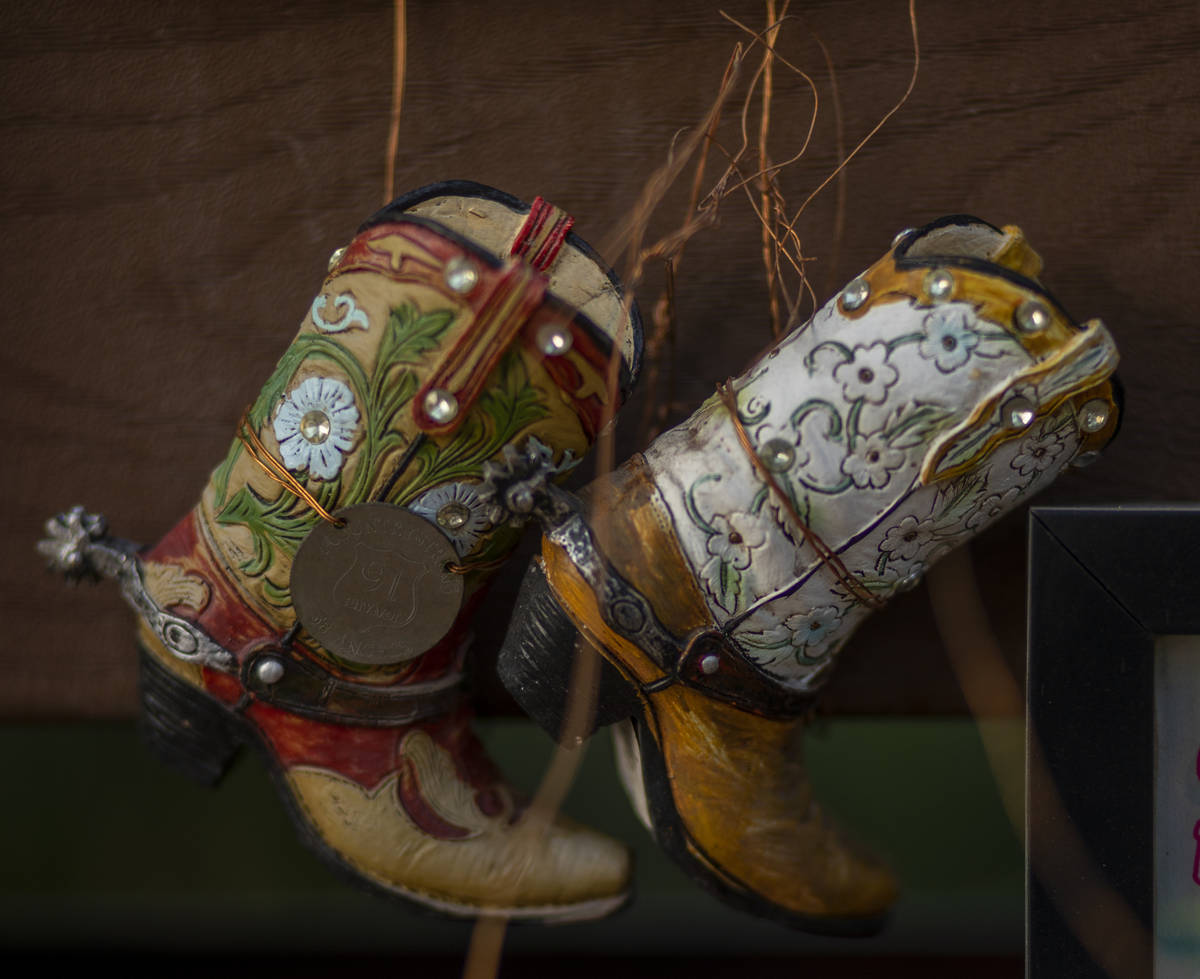 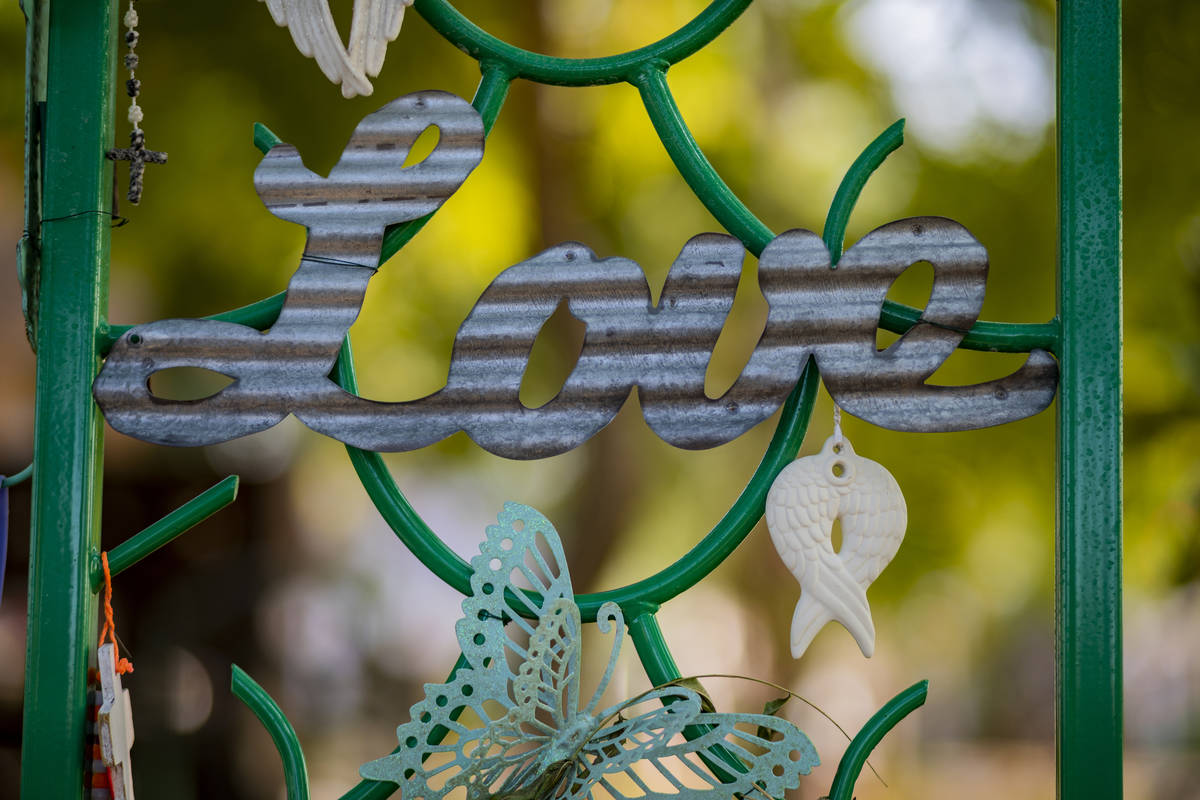 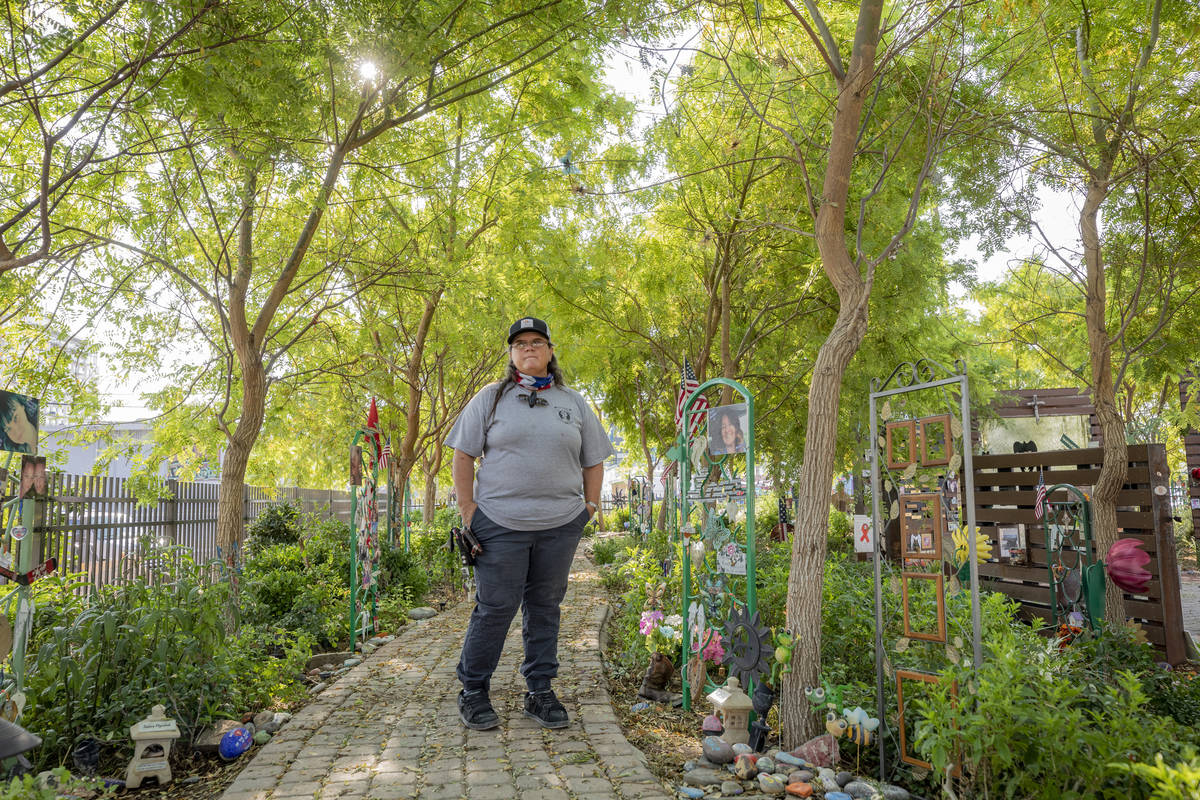 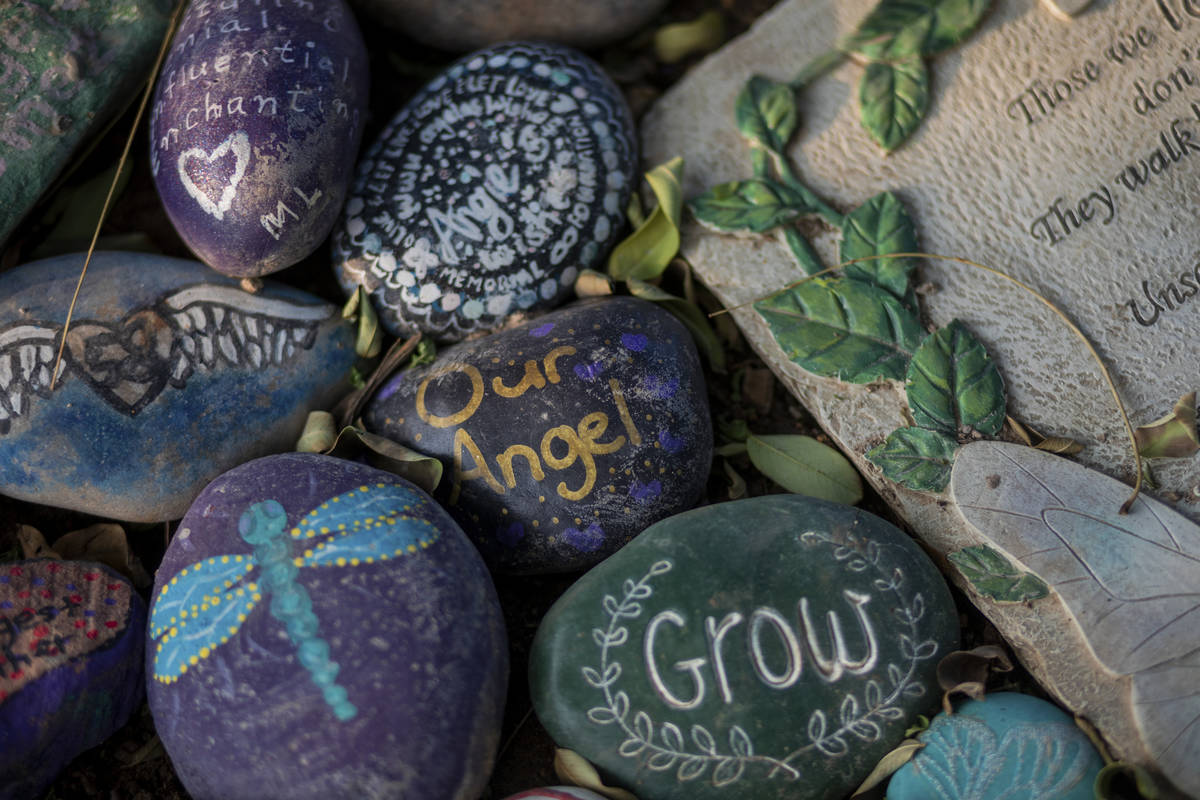 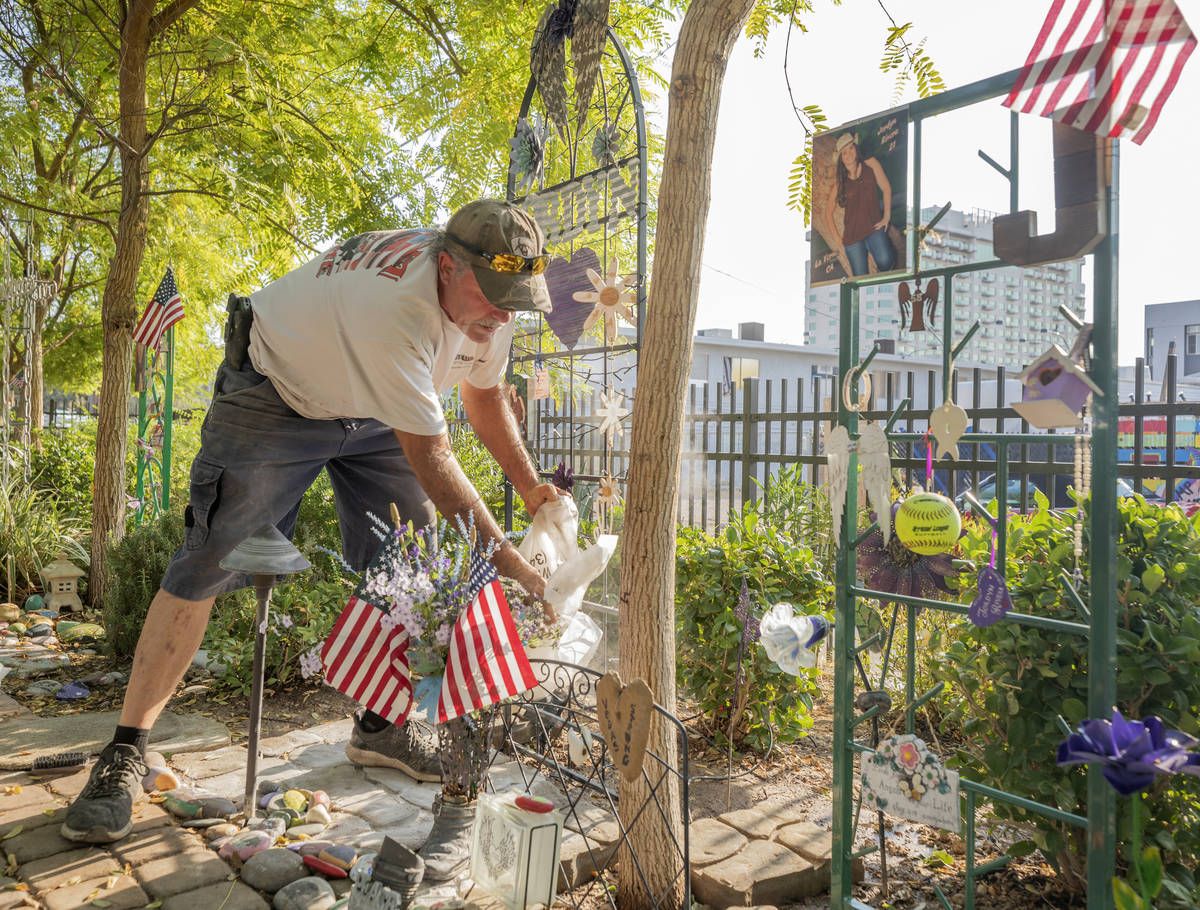 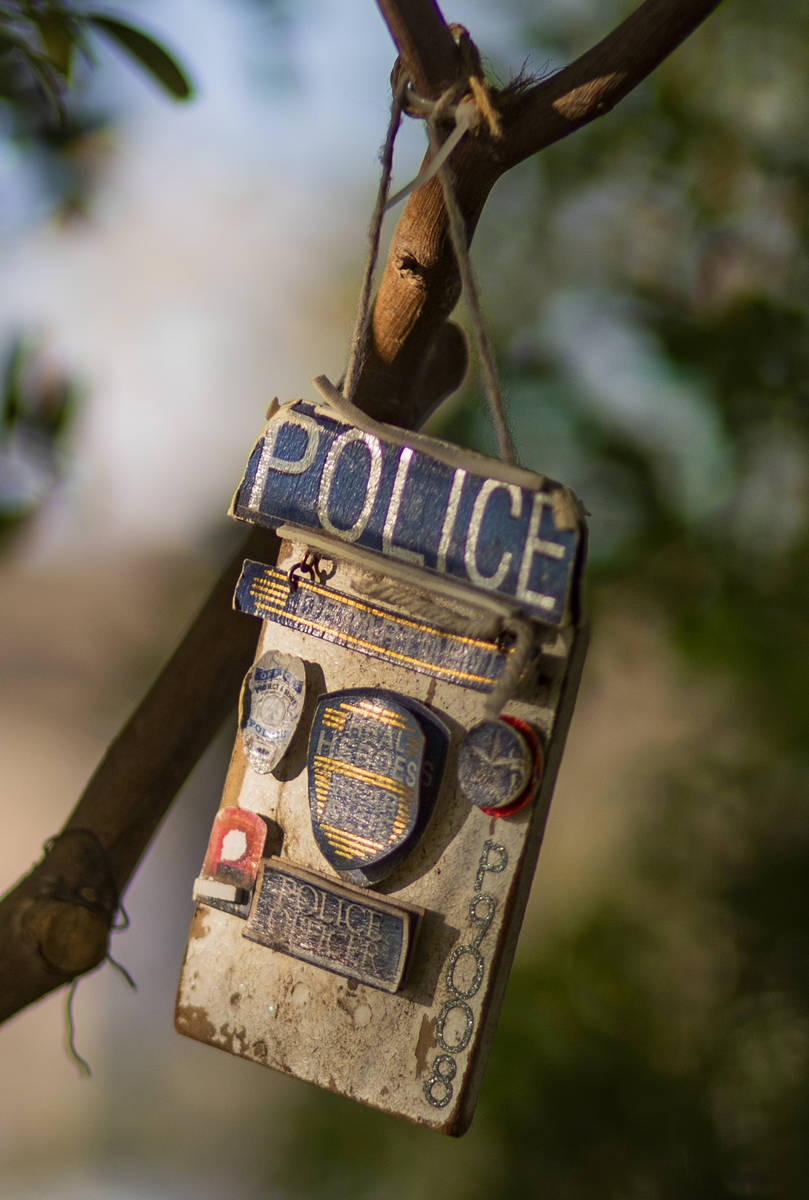 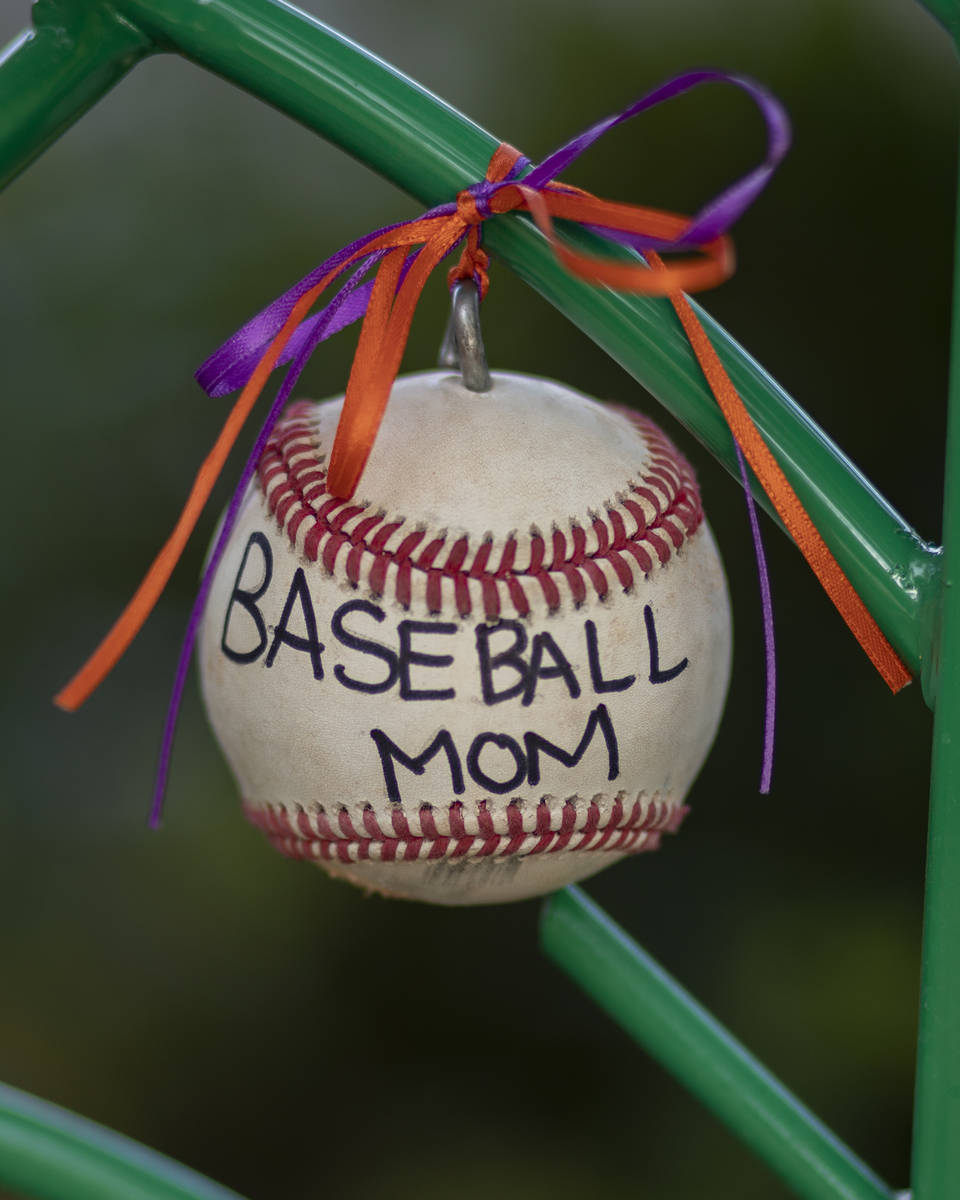 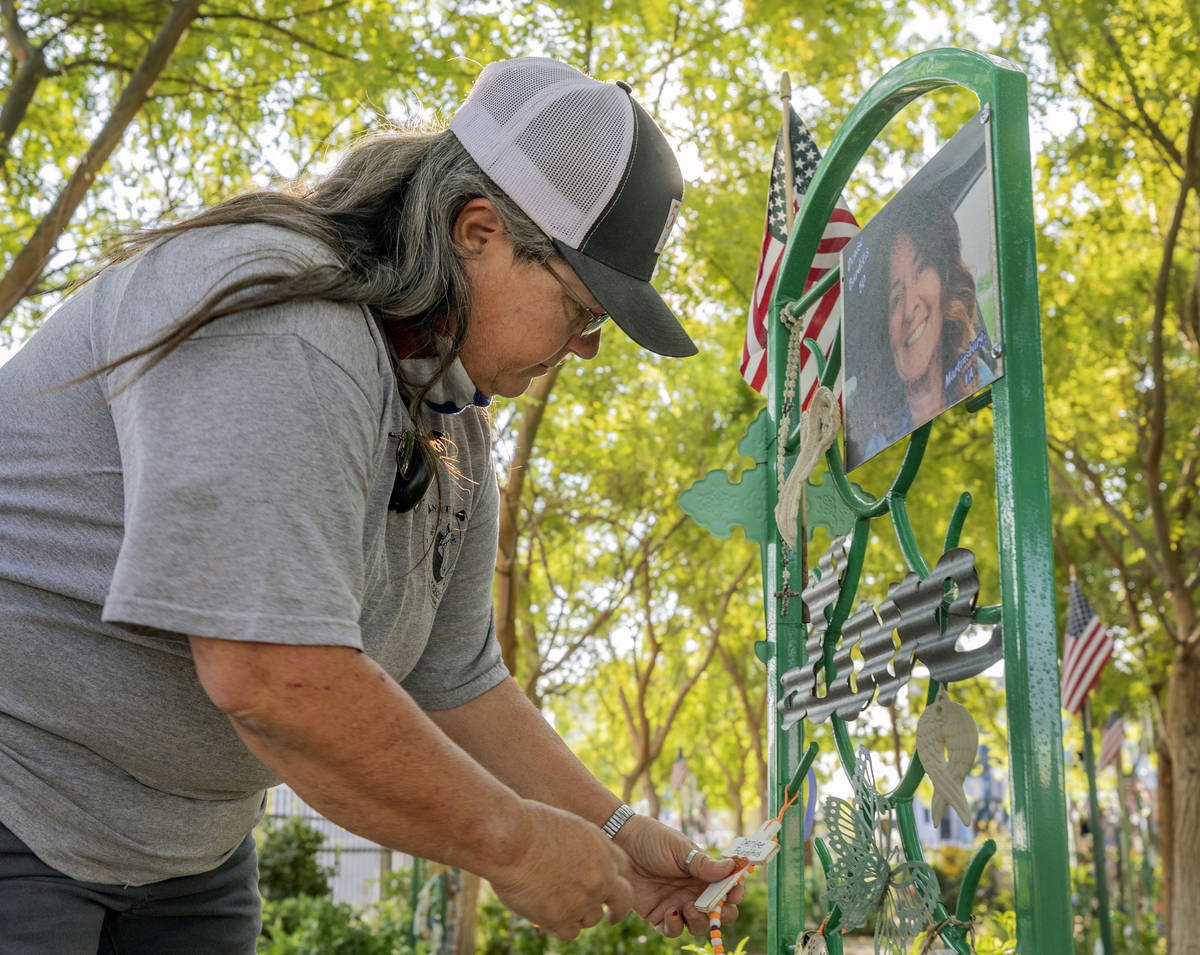 Sue Ann Cornwell looks at the Healing Garden memorial of Denise Burditus, who died as Cornwell was attempting to escort her to safety during the Oct. 1, 2017, mass shooting. (Elizabeth Page Brumley / Las Vegas Review-Journal) 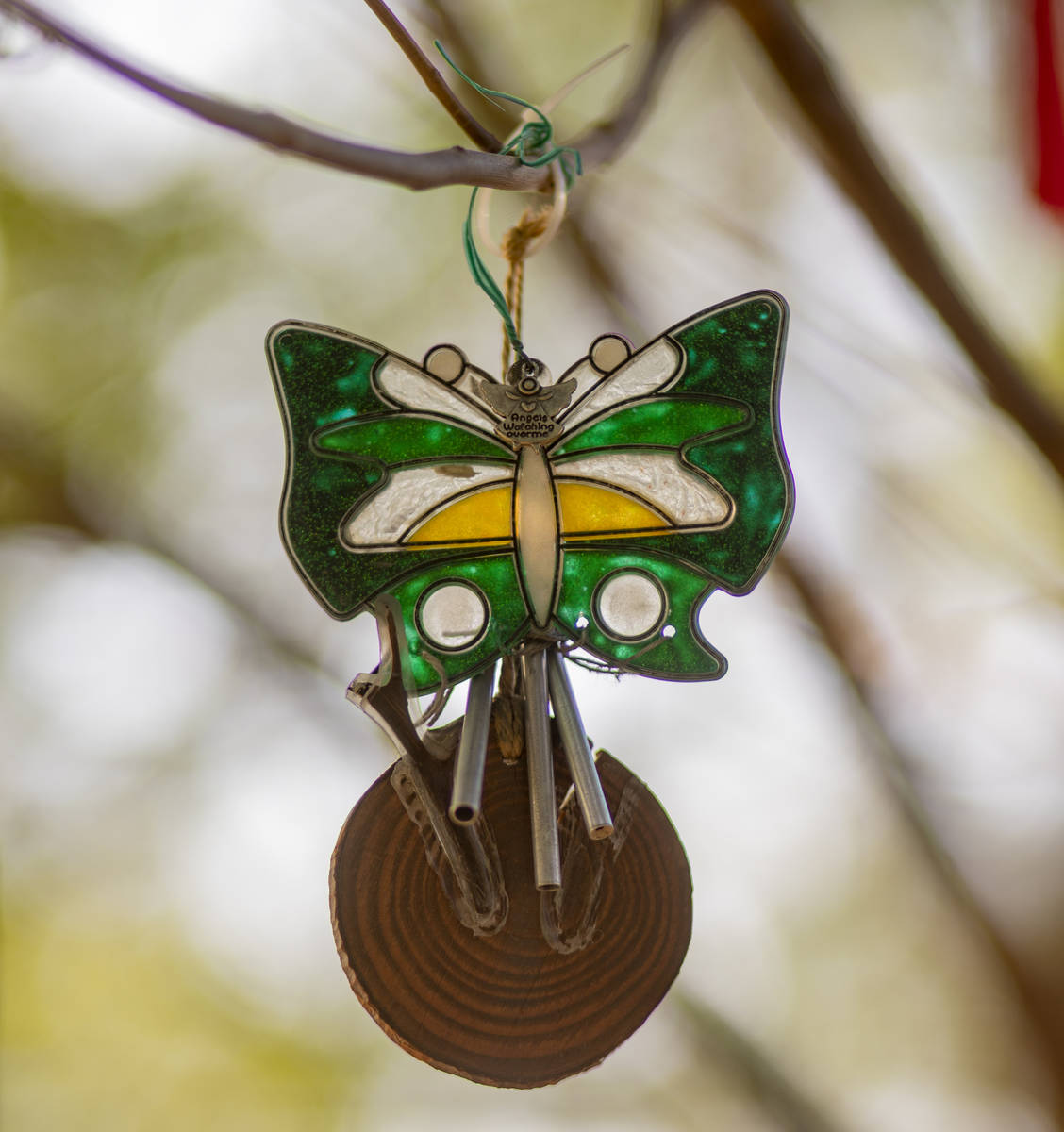 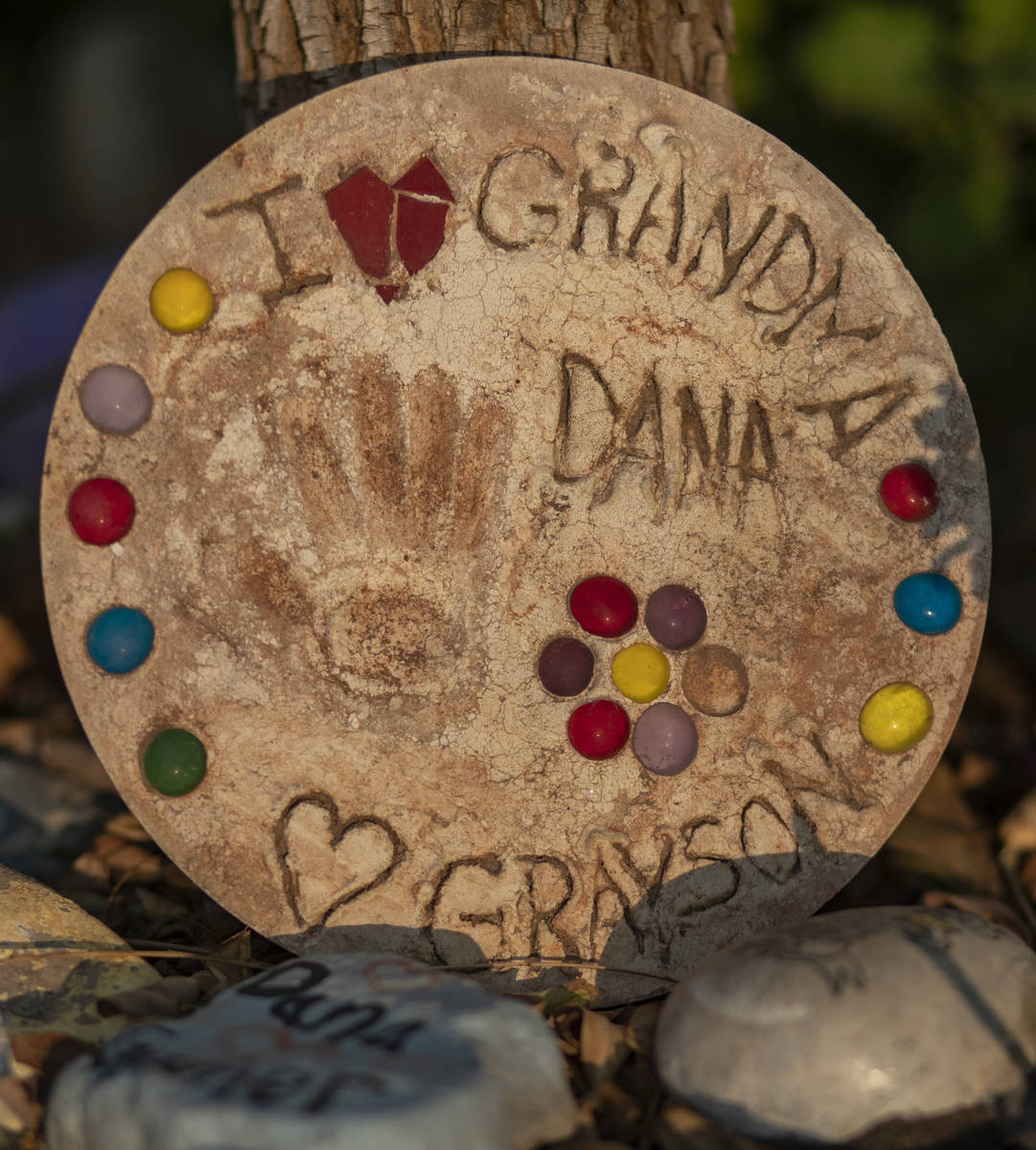 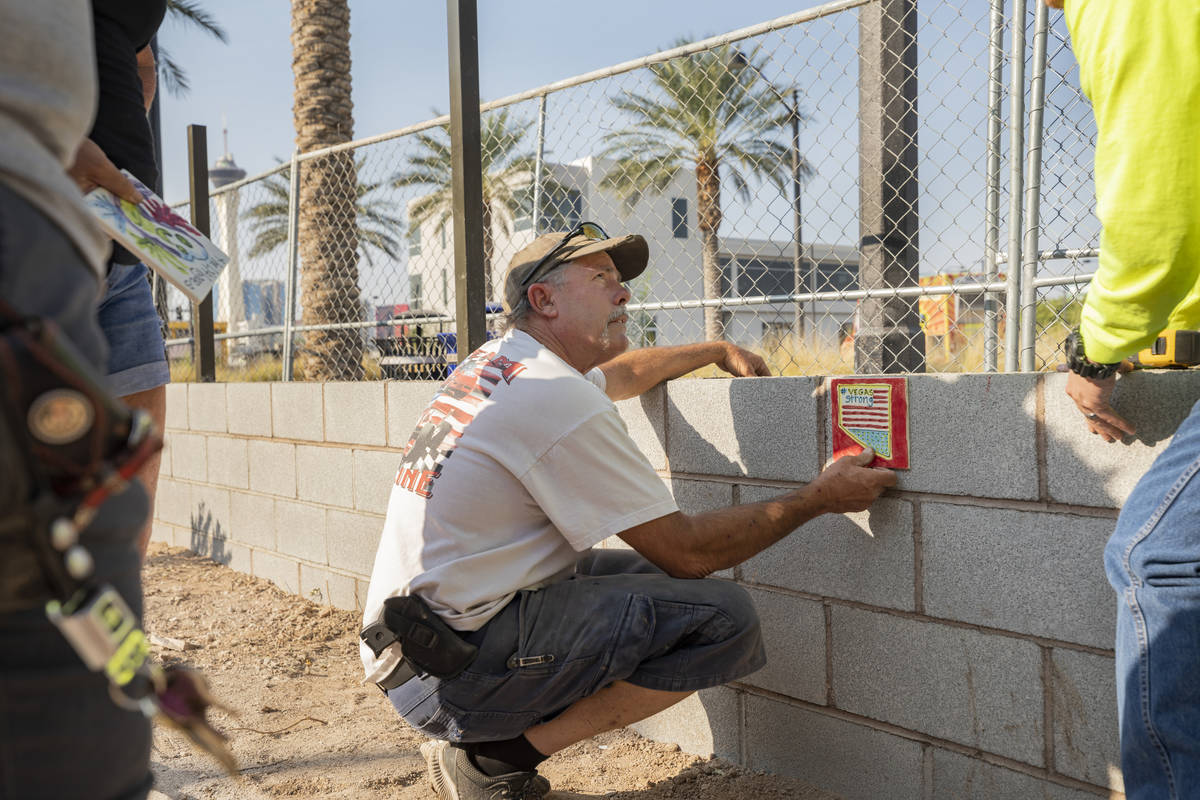 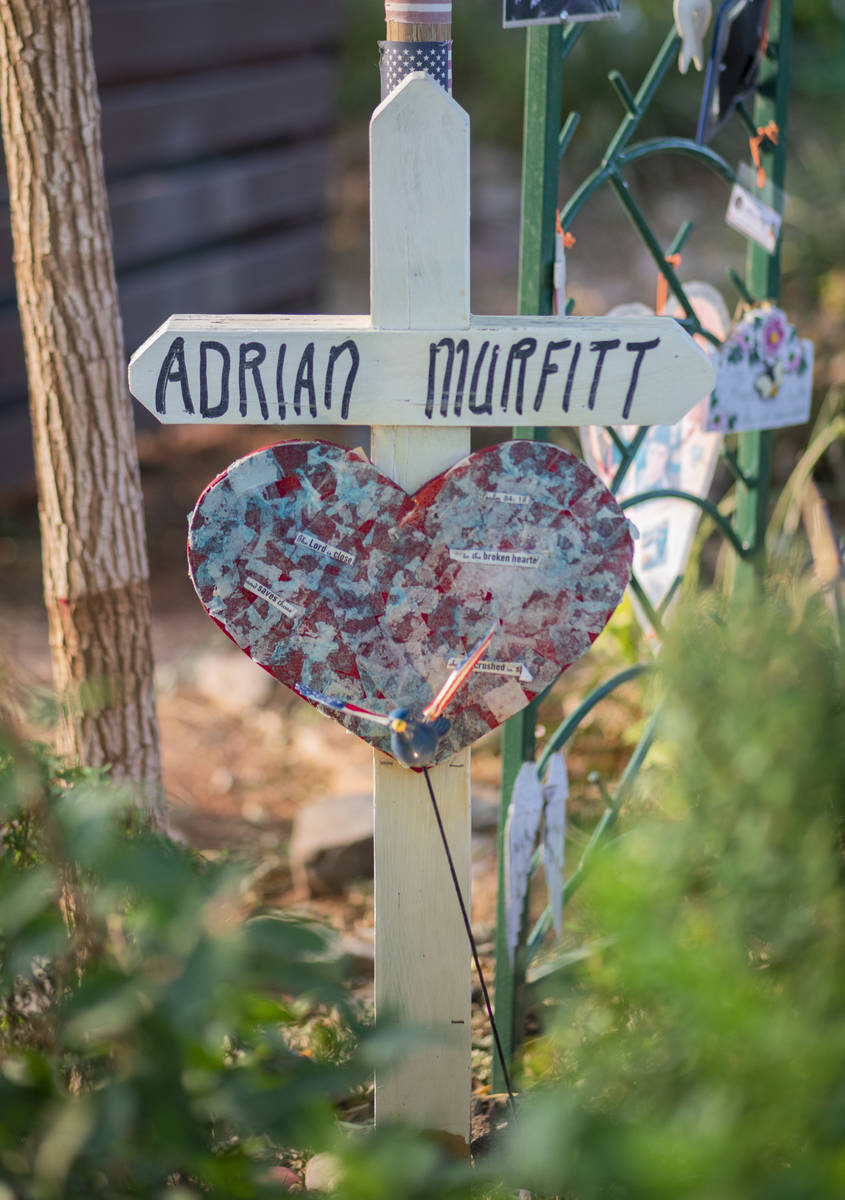 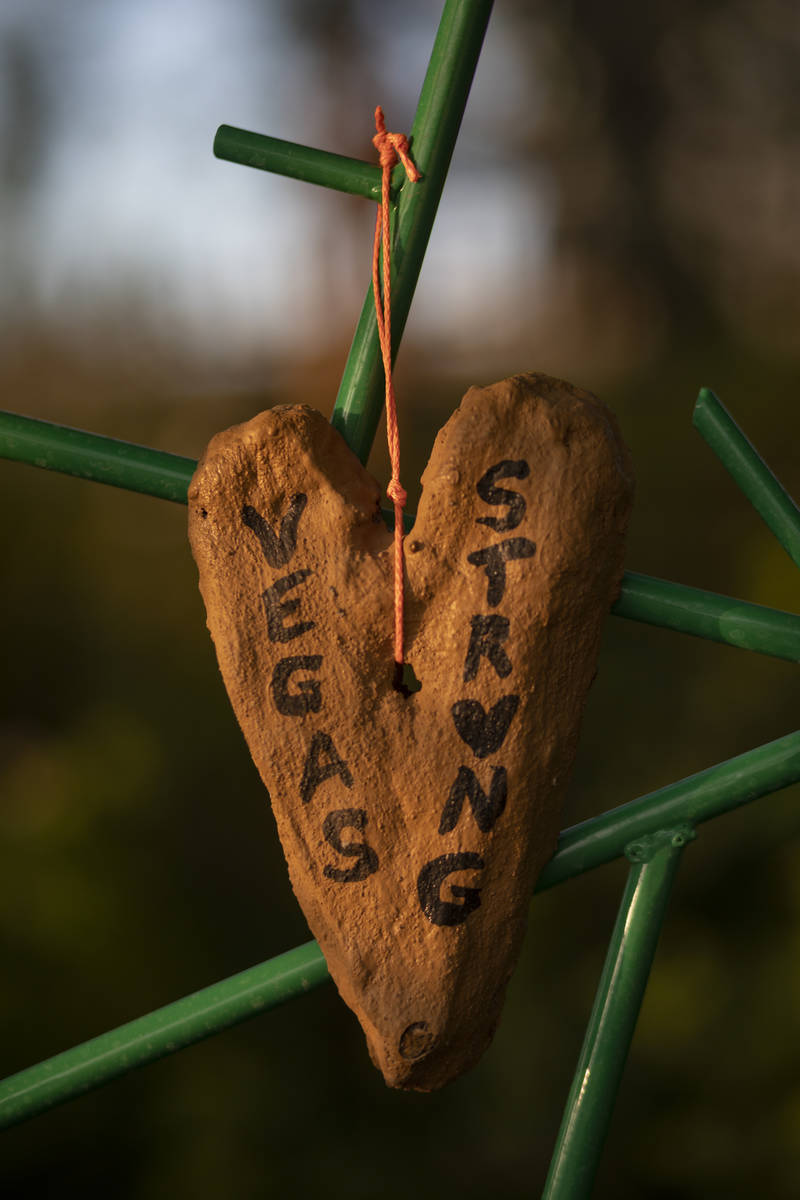 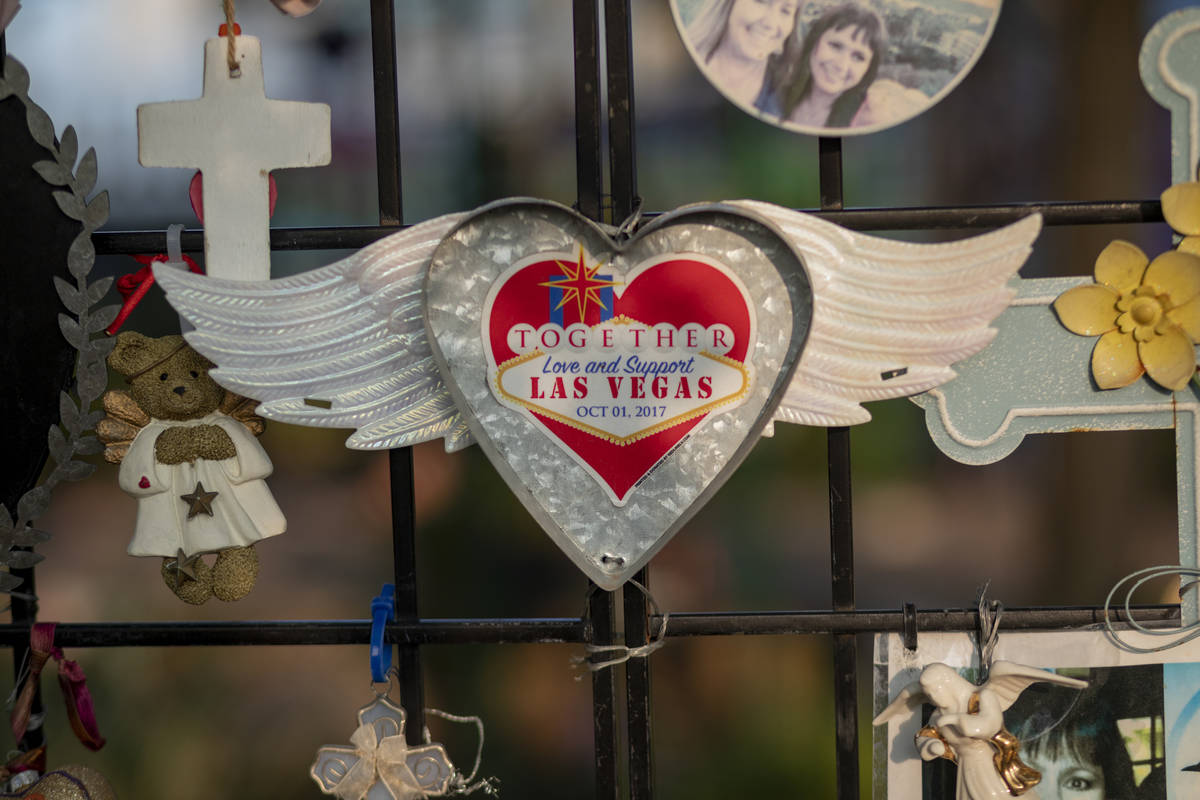 The sweat is as thick on his brow as the sentiment is in his voice.

Eddie Schmitz pulls out his cellphone to underscore why he’s here on this Tuesday morning in September, the temperature steadily rising in unison with the emotion with which he speaks.

On its screen flashes a picture of a Canadian mother of two.

“Yesterday, it was Tera Roe’s birthday,” Schmitz says of the Route 91 Harvest festival shooting victim. “On my Facebook page, every single birthday, they’re honored on my page,” he notes, scrolling through one memorial after the next. “Every single one of them.”

Schmitz stands in the center of the Healing Garden, the verdant downtown oasis created in honor of those who died during the tragedy in question, populated by 58 trees for 58 victims (There is talk of adding a memorial to the garden to honor any further victims, as there is no room for any more trees).

Built in just five days after the worst night in the city’s history, it stands as a testament to a community coming together in a time of unprecedented sadness and loss, an enduring patch of serenity catalyzed by the opposite.

“Over 400 people were working 24 hours a day to build that from nothing, from a little plot of land that the city owned,” Mayor Carolyn Goodman says. “They worked around the clock. It’s a beautiful thing.”

As the third anniversary of the massacre approaches, the garden is undergoing a transformation — cement is being poured; cinder blocks are being stacked.

It’s doing so largely at the hands of Schmitz and Oct. 1 survivor Sue Ann Cornwell, an Army veteran and a retired school bus driver, respectively. They spend six to eight hours between them here nearly every day, volunteering their time.

It hasn’t been easy.

Until recently, there had been issues with the local homeless population.

“There’s a lot about the garden that’s inviting to everybody, and so it was inviting to folks who are more down-and-out and in need of a little bit more help than some others,” explains Mauricia Baca, executive director of Get Outdoors Nevada, which oversees the maintenance of the Healing Garden. “But that creates some complications because when somebody is essentially living in a place like the garden, there are no bathroom facilities there, and so that creates some really specific problems.”

“It was just bad,” he recalls. “There were needles in here. It was bad.”

But through his and Cornwell’s efforts — as well as some teamwork with Baca and the city of Las Vegas — they’re ushering in a new era for the garden.

Theirs is a story of two friends with one aim: to keep alive the memories of those for whom this parcel now blooms. To keep the garden growing.

“It’s a labor of love,” Schmitz explains, his thoughts turning to the victims. “I can’t let them be forgotten on my watch.”

That’s when it all began for Schmitz.

“I’ve been here all my life,” the Las Vegas native says of what spurred him to action in the immediate wake of the Route 91 shootings. “Had a lot of friends there. Had some friends who didn’t come home. And here we are.”

Cornwell was at the concert with her sister, Billie Jo.

She attempted to come down to the garden when it was being built. But she just couldn’t.

Cornwell didn’t just survive the tragedy, she helped others do the same, using her truck to carry nine people out of the festival.

One of them didn’t make it, though: Denise Burditus died as Cornwell was attempting to escort her to safety.

So Cornwell found a way to come down here, to honor the woman whose life passed in her presence.

“I picked out Denise’s tree,” she says. “Her family lives out of town, so I came down and picked out her tree and started decorating. Then I just saw that there was disarray and a lot of other stuff, so I just started picking stuff up.”

Cornwell met Schmitz at a benefit concert for children whose parents were among those killed, and the two became fast friends. 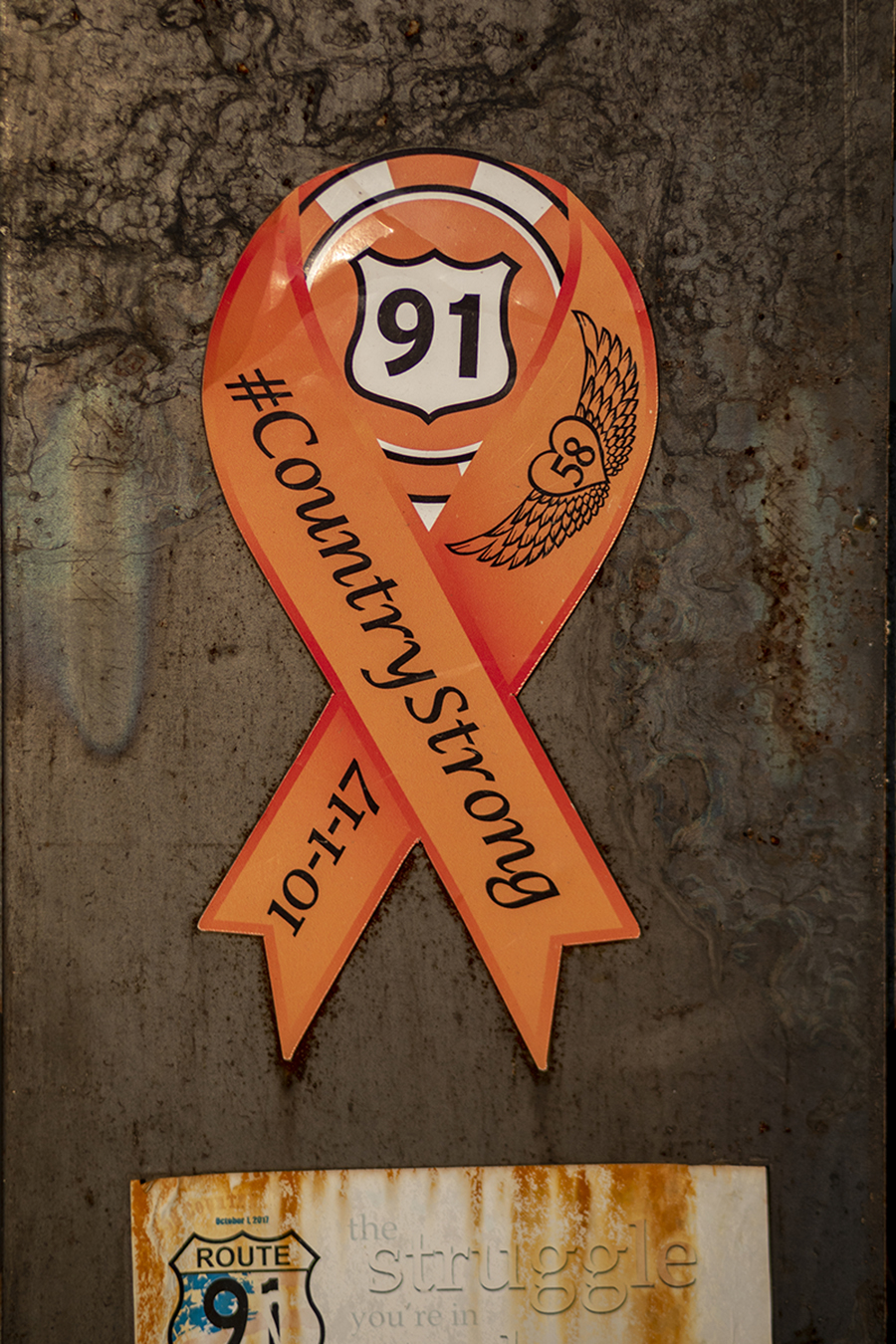 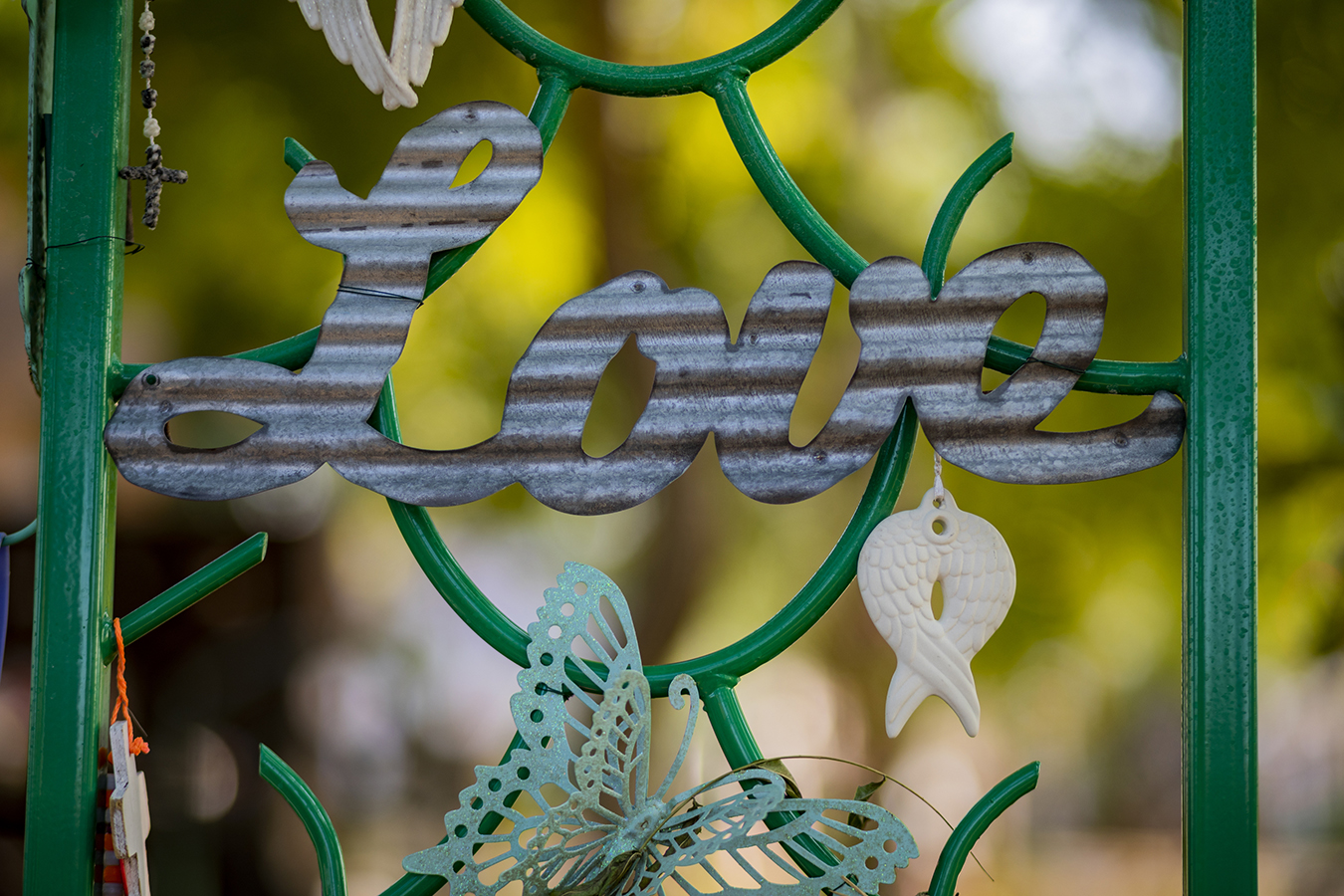 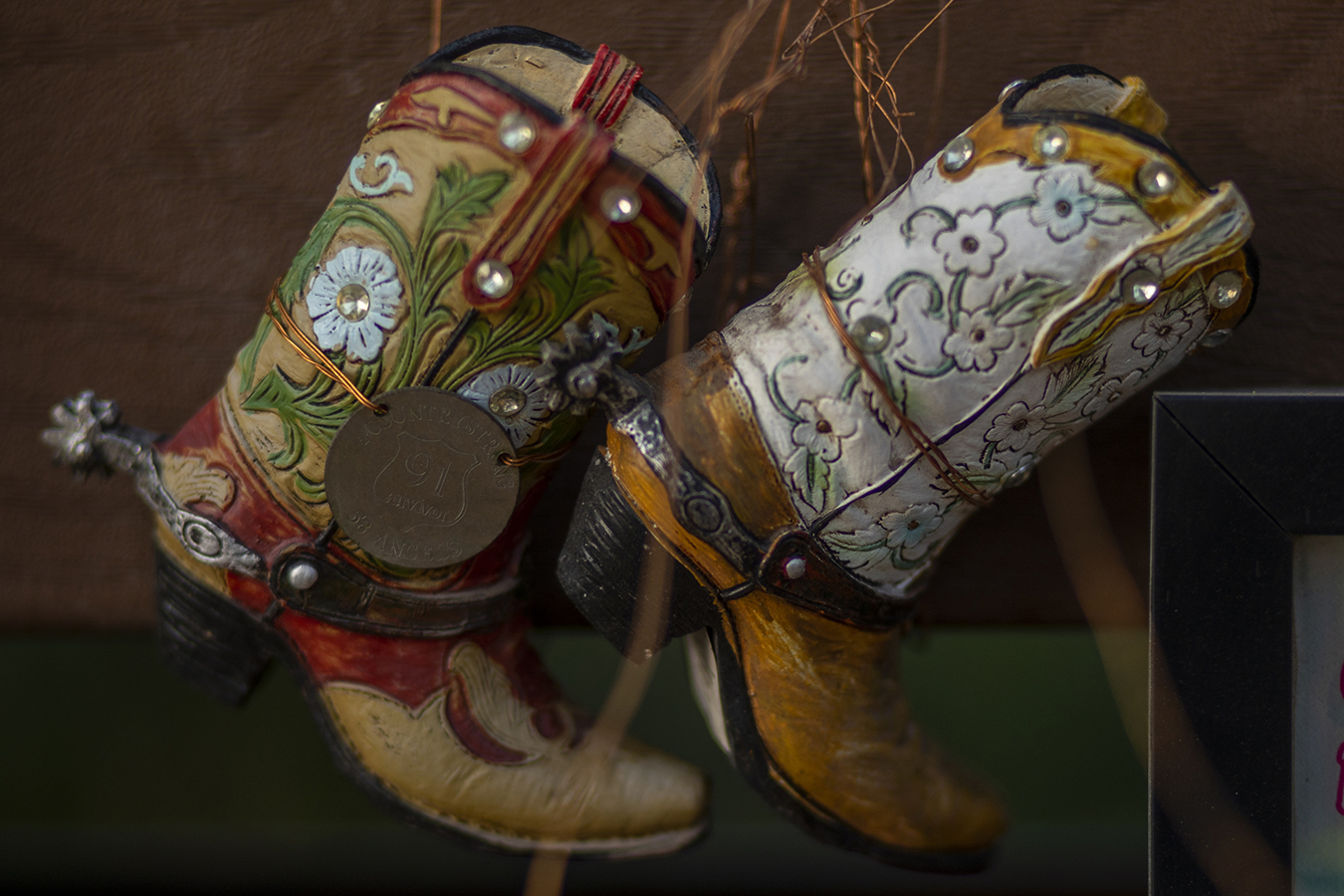 They began tending the garden together in 2018.

”We just started doing little projects,” Cornwell says. “We work well together. We enjoy doing it. We come down here and find peace.”

They would work in shifts: Schmitz in the morning, Cornwell at night.

They frequently encountered homeless visitors, but it wasn’t much of a problem at first.

It was the opposite, in fact.

“During that first year, the homeless, they knew what this place was and they took care of it,” Schmitz recalls. “They kind of thought they were the security guards of the place.”

Cornwell says that they were often eager to help keep the garden clean.

“I’d pull up and I’d have three of them come over and say, ‘What are you doing today? Do you have trash bags? We’ll pick up trash,’ ” she recalls. “But those people are gone.”

“The homeless community is so transient,” Schmitz adds. “The people who replaced them have no clue.”

Things came to a head earlier this year.

“We had a whole lot of damage one night. We came down here and there was just a pile of broken stuff,” Cornwell says. “We’re always on the lookout for broken stuff and stuff that goes on, but we never report it. We just fix it and put it back together because we never want a negative light to come on the garden.

“But this day,” she continues, “we had to do something.”

He points to a small box that once doubled as a big problem.

Schmitz is eyeing the electrical source for a water feature at the Healing Garden.

“This had a plug there and the homeless would come — there would literally be a line for hours — they’d sit here for four hours charging their phones,” he says.

The box has since been hardwired and covered. It can no longer be tapped into.

“That ended that problem,” says Cornwell, who says she tried for two years to get the city to make the change to no avail, running into bureaucratic brick walls, before deciding to go public with their concerns.

The turning point came in June when Cornwell and Schmitz attended a city council meeting.

“They came in and expressed some concerns they had about the situation at the Healing Garden,” recalls Las Vegas Ward 3 Councilwoman Olivia Diaz, whose district includes the garden. “I remember delegating my staff to connect with them immediately because I think that it’s important to ensure that we are listening to the people on the ground.” 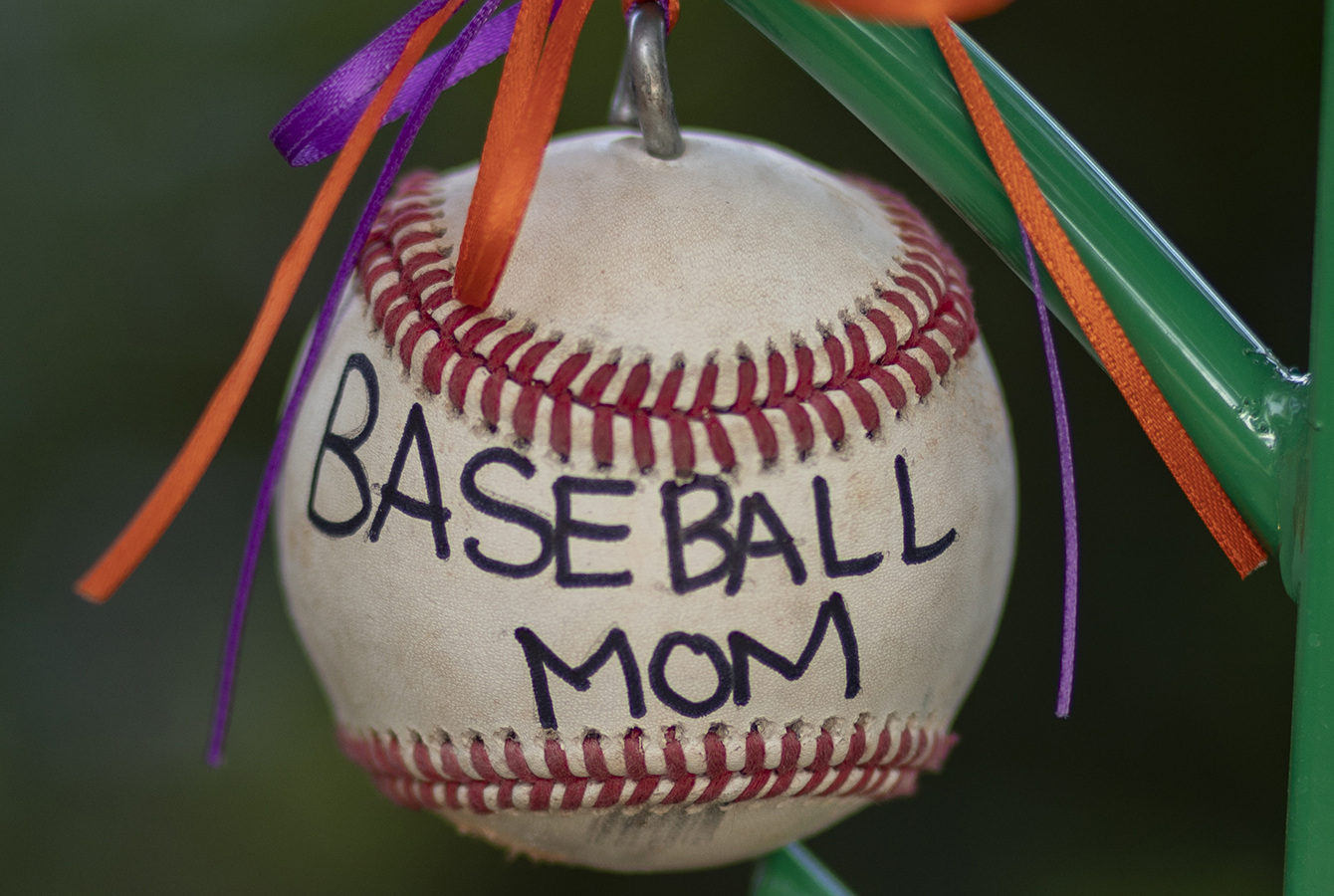 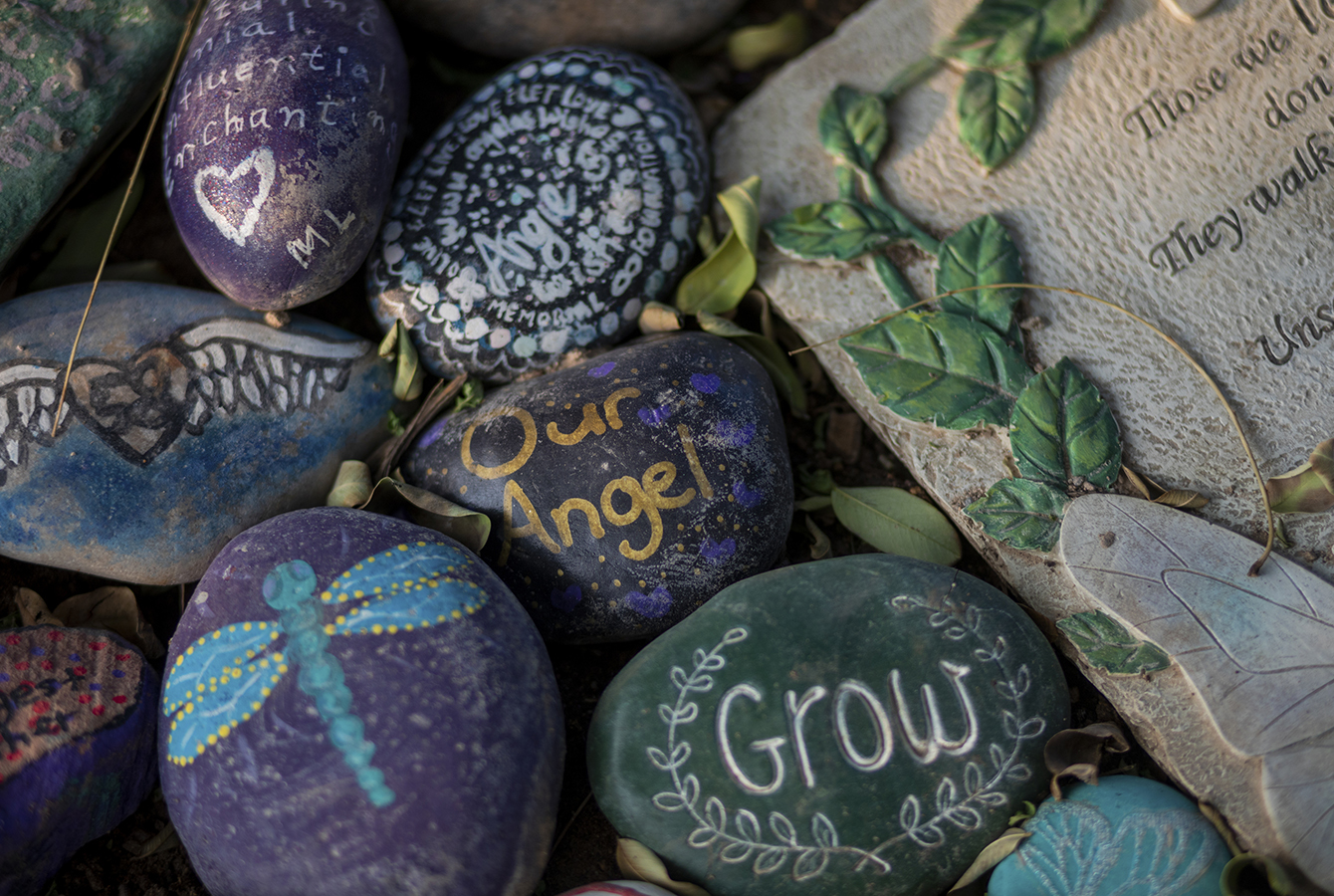 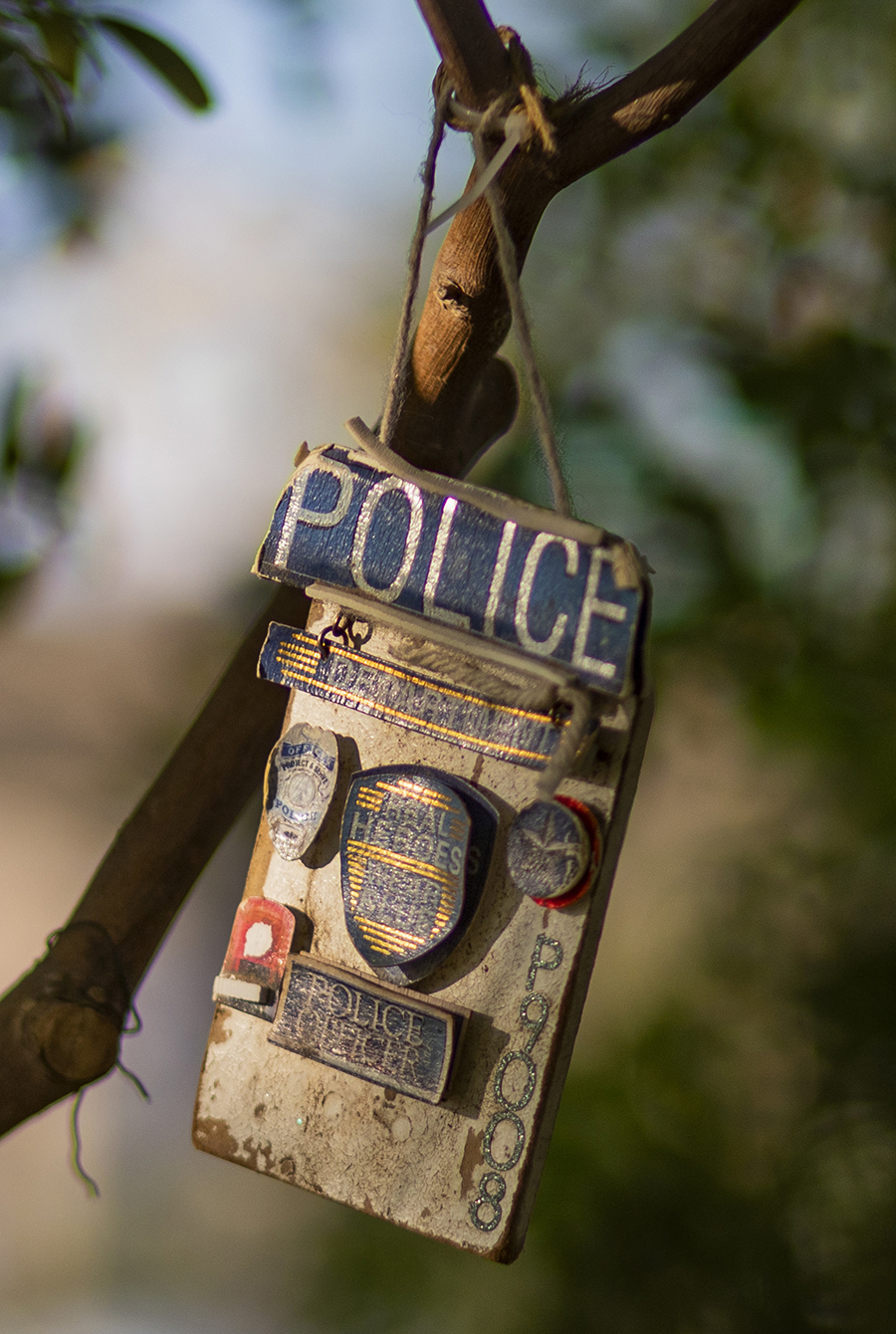 The mayor also was compelled to act after hearing Schmitz and Cornwell.

“The very first thing when I hit my office after the meeting was to make a phone call,” Goodman recalls, “because when you hear from the people who love our community, you know they are reporting accurately that something has gone awry. That Healing Garden is deep in our hearts for everybody who was here on Oct. 1, and it remains something that’s almost sacrosanct. I’m so glad they came in front of us.”

The results were immediate.

“Things started changing that day — literally, that day,” Schmitz says. “If we’ve got a concern or a question or a problem, the city addresses it. They’ve been on top of it.”

Walking through the garden, Schmitz points out other alterations.

“Sue Ann was here last week and there was a guy who had one of the lights turned up with his heroin sitting on top of the spoon trying to cook it. So, what we’ve done is we’ve created this,” he says, holding up a metal light cover.

“These are going to go on all the lights, so that people can’t use it for that,” he continues. “They’re turning them around, they’re breaking them, they’re kicking them off, so they’re going to have covers on them.”

Additionally, an outer wall with a gate is being constructed, and the garden is now patrolled regularly by city marshals.

“The marshals are awesome. We make a call — boom! — they’re here,” Schmitz says. “They’ve stepped up their patrols. Now that they’ve got this gate going up, they’re going to start locking it at 11 o’clock at night. It’s a beautiful thing.”

A garden continues to grow

From wood to iron, the pictures are being transferred to something as enduring as the memories they convey.

Post-hole digger in hand, Eddie Schmitz is replacing the wooden posts that support each of the 58 trees adorned with photos and mementos of victims.

“Here’s the problem with the wooden posts: After three years they just snap off,” he explains. “We had trellises made. We’re transferring everything off of the trees and off of the wood onto beautiful trellises and cementing them in.”

It’s a laborious process, cementing each one in place.

“The trellises are work,” Cornwell acknowledges. “But I love doing it. I wouldn’t have it any other way.”

As the trellises indicate, the recent refurbishments to the Healing Garden aren’t just for enhanced security.

New sod will be coming shortly. Schmitz and Cornwell are replacing all of the picture frames with longer-lasting aluminum mounting and adding scads of the leftover ceramic tiles that volunteers painted in tribute to victims to the fencing around the garden, which has become an international destination. 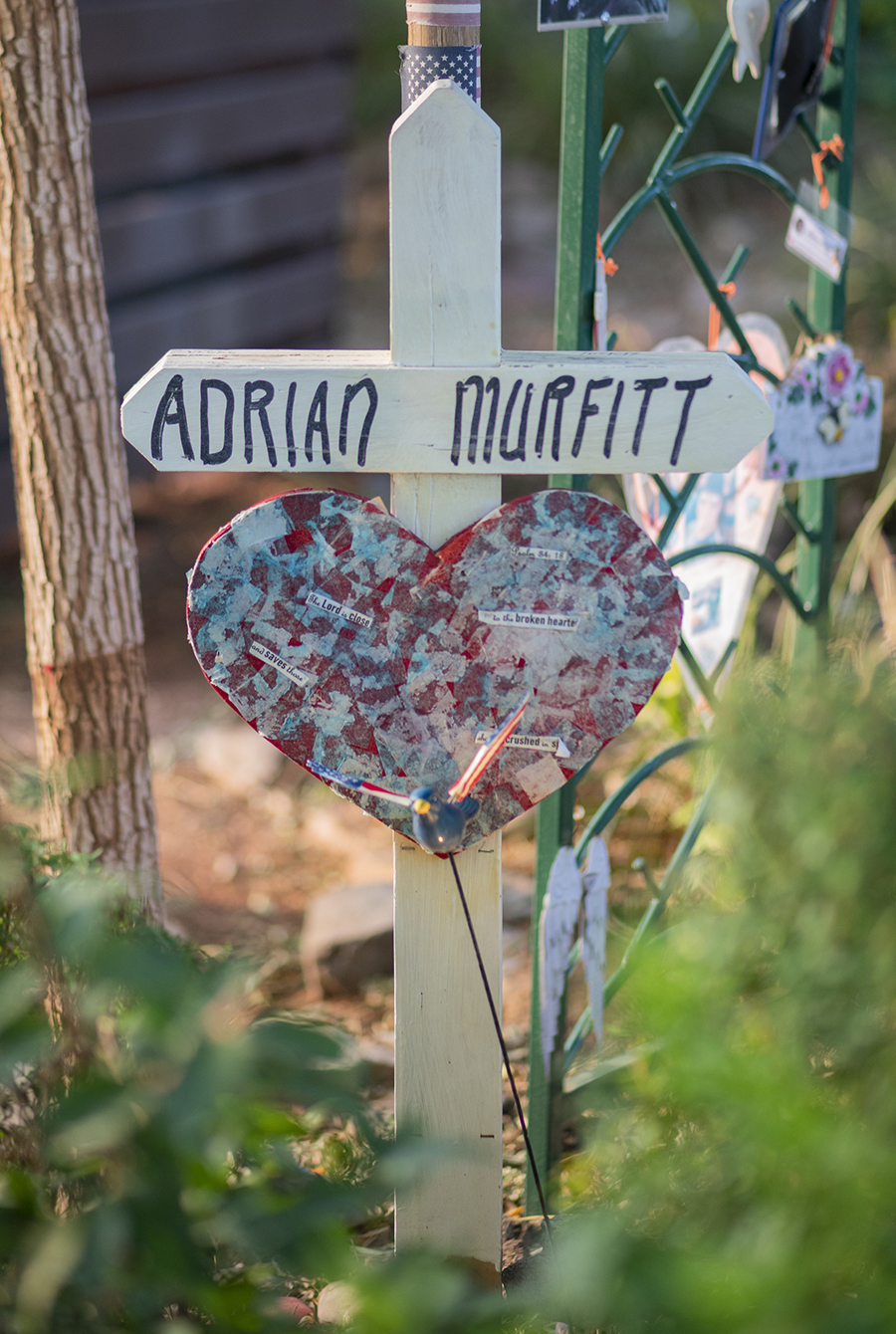 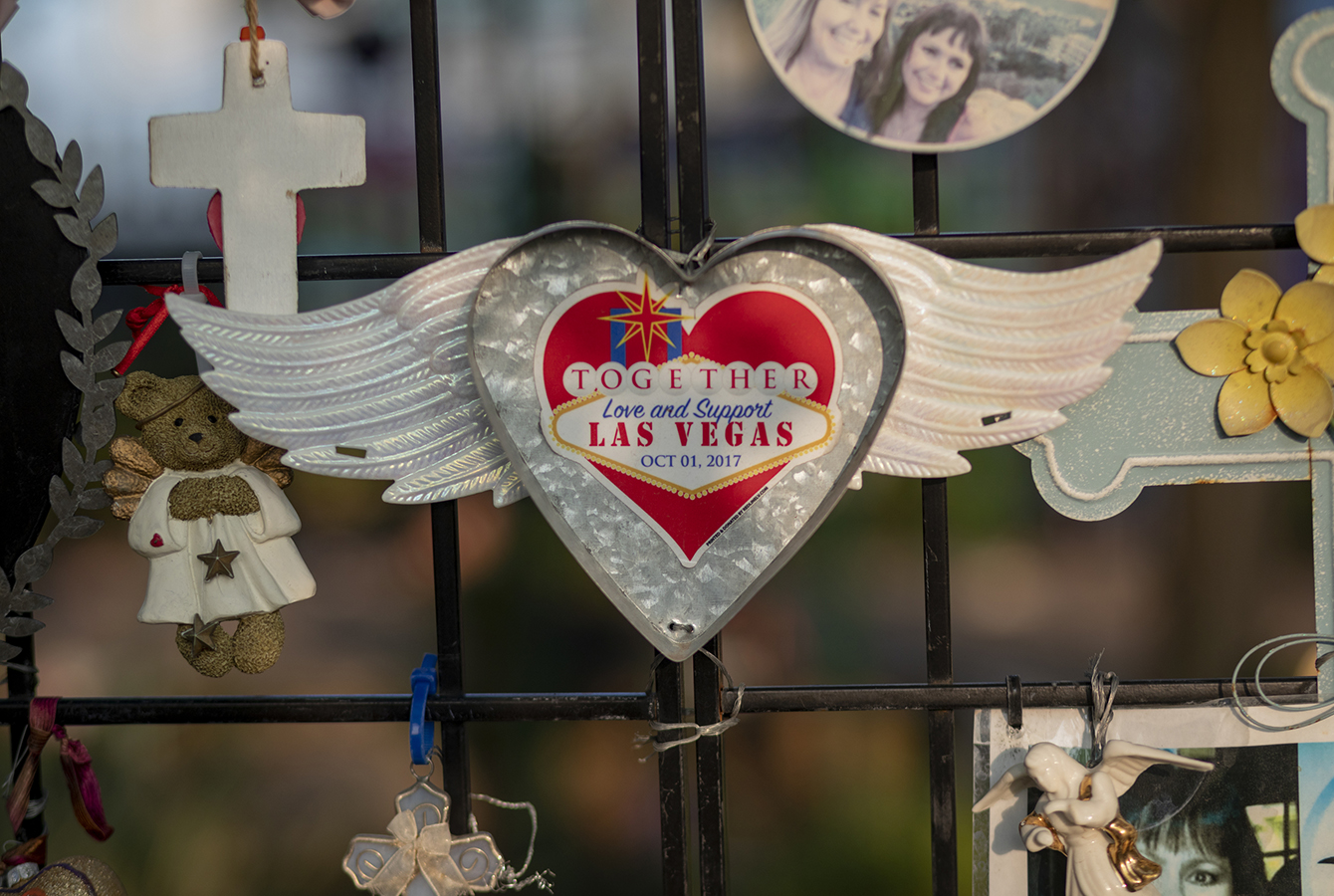 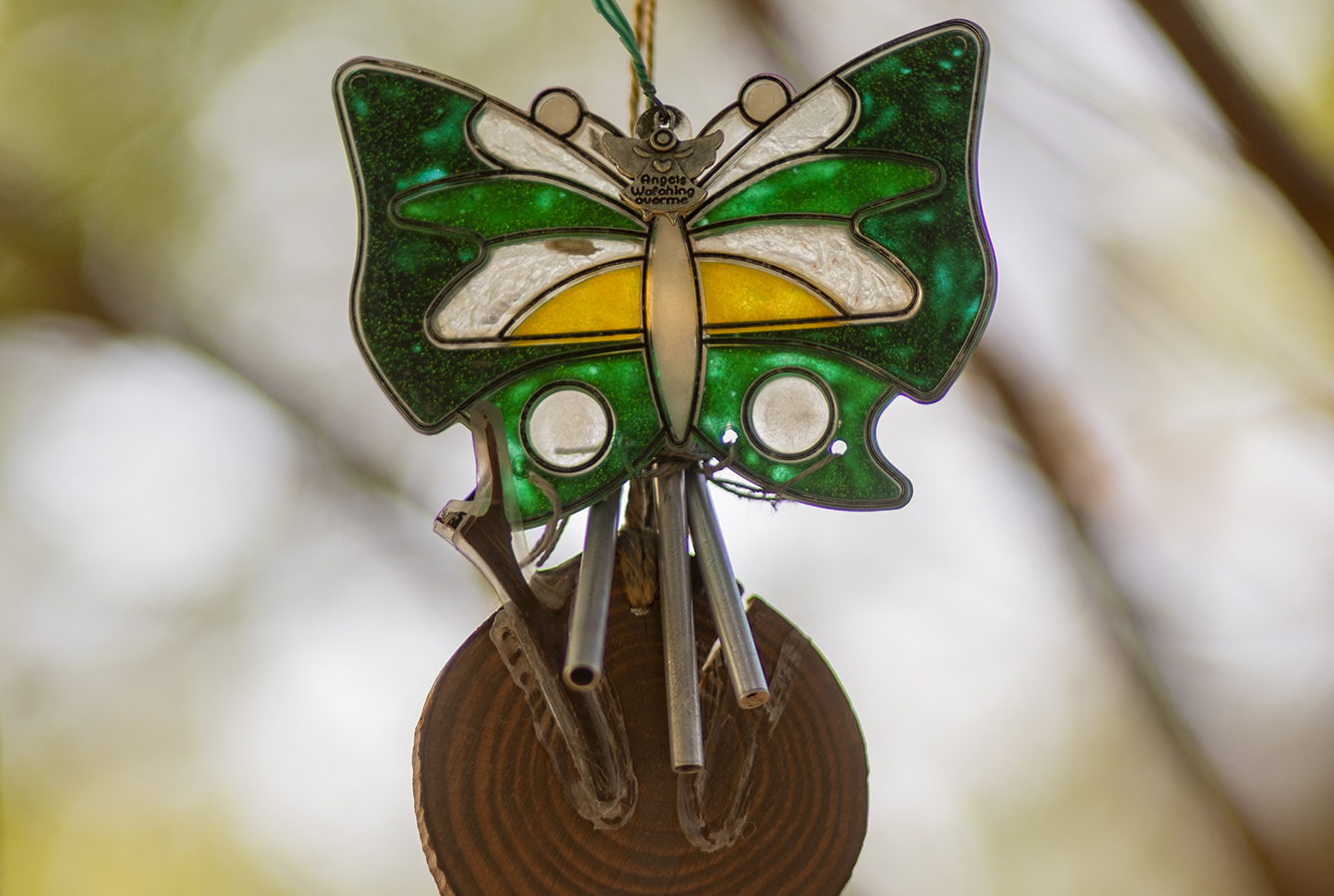 “People from all over the world come here. It’s amazing. It truly is,” he says. “I’ve had people from New Zealand come here and place rocks.”

Schmitz and Cornwell are vying to complete their work by Oct. 1, though it’s unclear at this point what kind of memorial event may be able to take place there with ongoing coronavirus concerns.

“We’re working with the city to assess exactly how to structure a remembrance in conjunction with all the other restrictions that are placed on gatherings these days,” Baca says. “It adds some complications, but we’re working to develop some solutions because we realize it’s an important gathering place for people.”

As the garden has continued to evolve, the same could be said for what it represents.

“It’s become a special place now for many of the survivors of that night, and it’s a place of reflection, I think, for people in the city and for visitors who may be going through whatever is happening in their own lives,” Baca says. “When you’re standing inside the garden, somehow it just feels more quiet, more peaceful. We can all benefit from that.”

Schmitz seems to understand this implicitly.

He has spent a good portion of the last two years of his life here, trimming, cleaning, building.

His work will never be done, and that’s the whole point: The garden must keep growing.

“I don’t know why — I really don’t understand it — it became my church without walls,” Schmitz says. “It’s where I love being. These 58 people can’t be forgotten.”