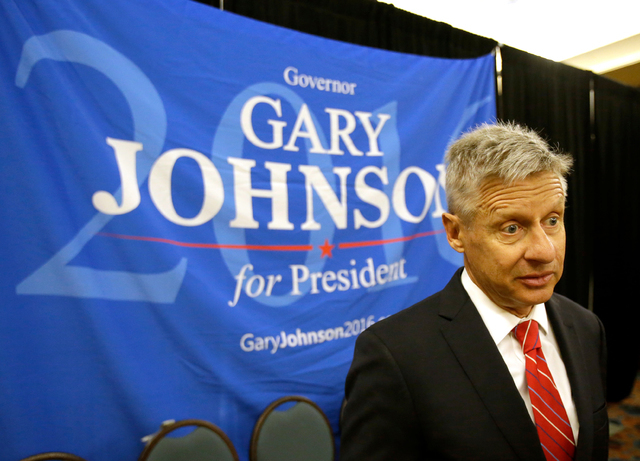 Libertarian presidential candidate Gary Johnson thinks it’s a real possibility that he’ll be sharing the prime-time debate stage with the Democratic and Republican party nominees this fall, he said Friday.

Johnson, the former governor of New Mexico, was in Las Vegas participating in the Freedom Fest conference at Planet Hollywood, capping off a week that began with an appeal to supporters of Bernie Sanders after the U.S. senator from Vermont formally endorsed presumptive Democratic nominee Hillary Clinton.

To qualify for the debate stage this fall, Johnson needs to poll above 15 percent, and some recent polls show him nearing that threshold.

“I think it’s going to happen,” Johnson said of qualifying for the debates, in a Friday interview with the Review-Journal. “Two months ago, I think the consensus number was 5 percent in the polls, which was very significant. Right now you see polls coming out that have me at 12 percent. And there are also polls at 8 percent. I think solidly the consensus number is 10 percent. You can see that it’s ratcheting itself up.”

Johnson attributes that in part to the “Bernie phenomenon.”

Sanders’ support base drew heavily from millennials, two generations after the 1946-to-1964 baby-boom generation.

“Millennials really do care about individual liberty and freedom and they care about equal opportunity,” Johnson said. “The system is gamed. Politics is for sale.”

Johnson also suggested that many people might find their values line up with Libertarian values.

Johnson described Libertarianism broadly as fiscally conservative and “who cares what you are socially as long as you don’t force it on others.”

After Sanders’ endorsement of Hillary Clinton earlier this week, Johnson put out a campaign video appealing to his supporters who remain disenchanted with Clinton.

“If you’re still feeling the Bern and feeling burned because the Clinton machine rolled over your ideals, there is another option,” Johnson said in the video.

Johnson sees his positions lining up with Sanders on a number of issues.

The Pew poll underscored how polarizing this presidential contest is, with its finding that fewer than half of both Clinton and Trump supporters “strongly” back their candidate.

Johnson and his running mate, former Massachusetts Gov. William Weld, were both two-term Republican governors in their respective states. They participated in a Freedom Fest discussion Friday afternoon titled “Can Liberty Win the White House,” where they touched on federal spending, Clinton’s private email use as secretary of state, Trump’s proposal to build a wall along the Mexican border and combating terrorism.

Asked what their focus would be in the first 100 days in office, Johnson and Weld said they would roll out a proposal to balance the federal budget.

Johnson’s call to “conquer the world with free trade” was met with cheers from the crowd.

Johnson recalled one of his many vetoes as New Mexico governor, a piece of legislation that would have required pet stores to exercise animals a certain amount of hours per week, noting that if he had signed the bill, he would have eventually had to fund an enforcement mechanism.

Weld called for a centralized intelligence task force with an aim to head off lone-wolf attacks, citing Orlando nightclub shooter Omar Mateen carrying out the attack after the FBI had looked into him.

Both Weld and Johnson voiced confidence Friday in their campaign’s continued momentum. Weld called their campaign the “comet” that results in the extinction of the “dinosaur” two-party duopoly.