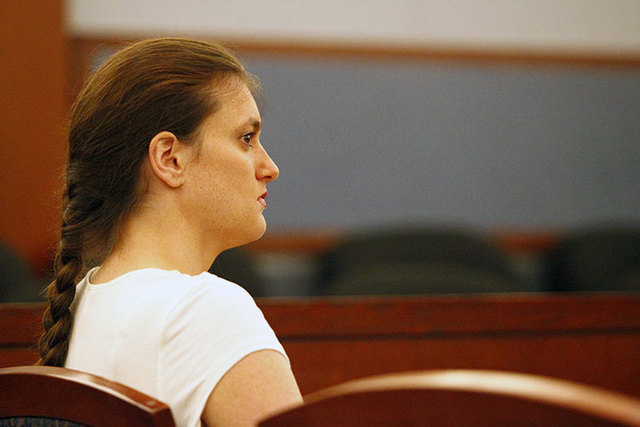 Michelle Flores, who was banned from Las Vegas district libraries for one year for carrying a firearm, appears in district court on Tuesday before Judge Stefany A. Miley, asking for removal of the ban. (Michael Quine/Las Vegas Review-Journal)

A District Court Judge on Tuesday denied a Las Vegas woman’s motion for a preliminary injunction after her attorney argued that she received a one-year trespass notice from the Las Vegas-Clark County Library District as a result of openly carrying her .38-caliber pistol.

Attorney Jeffrey Barr argued before Eighth Judicial District Court Judge Stefany Miley that his client, Michelle Flores, was given the notice after a hourlong search for books at Rainbow Library on March 16.

But attorney Dennis Kennedy, counsel for the district, argued that Flores was banned from libraries within the district not for carrying her pistol but for disruptive conduct. As Flores was leaving the library with her three children, Kennedy said, she was told by the security guard that she was not able to bring her firearm into the library upon return visits.

“She then wanted to debate with the security officer the validity of the policy,” Kennedy said. “The plaintiff and her three children sit down in the doorway at this point, for reasons that are unknown. They refuse to leave. Any harm the plaintiff has suffered is self-inflicted. She could have just got up and left and nothing would have happened.”

Barr argued the trespass notice given to Flores by library staff did not state that as the reason for her one-year ban.

Kennedy said that the timeline supports the library district’s contention that the notice was given because of disorderly conduct. A call was made to Las Vegas police at 11:30 a.m. They arrived at 12:20 p.m., and the trespass notice was given at 12:55 p.m.

Barr argued that the whole point of the case is that the district is not permitted to restrict the open carry of firearms and referred to Senate Bill 175, which reserves the authority to regulate the possession of firearms solely to the state Legislature.

Miley said postings on the library door “clearly indicate” that firearms are prohibited, adding that “presumably she (Flores) saw that when walking into the library.”

Miley denied the request for the preliminary injunction, saying that the evidence indicates that the trespass notice was a result of her disruptive behavior. Miley said that the library’s policy is not unconstitutionally vague because there is a sign on the library’s door.

She also focused on the issue of irreparable harm, which is necessary to prove in the case of a preliminary injunction.

“There’s really no showing that money damages are inadequate,” she said. “I understand it’s more expensive to download books or buy them from the bookstore, but it’s still always an option for an individual.”

After the hearing, Barr said access to public libraries is more important than just buying books off Amazon.

“And she home-schools her children, so you can imagine the hardship that this is going to cause, ” Barr said.

After the hearing, Kennedy said that the ruling is “absolutely correct” and that it’s not a “weapons-carrying” case.

But he said the law does not permit the open carry of firearms in a public libraries.

“The law at issue applies to counties, towns and cities,” he said. “This is a library district. It is not a city, it’s not a town, it’s not a county.”

Flores said she is “disappointed the judge refused to uphold the law.”

Barr said they plan to appeal the decision, which they have 30 days to do.