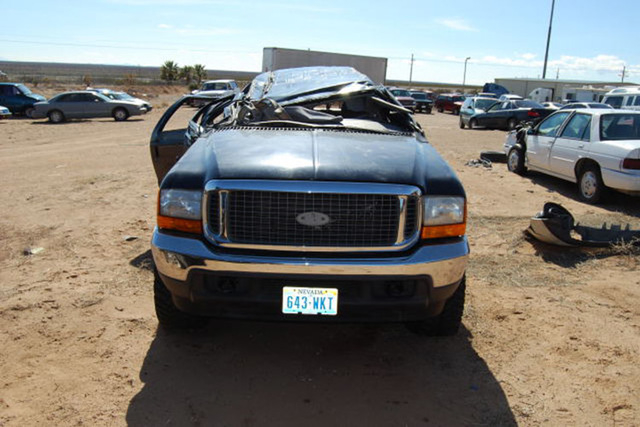 This photograph shows the crushed roof of the Trejos' Ford Excursion after a rollover accident that occurred in December 2009 in New Mexico. Rafael Trejo, 39, died in the crash. This week, a Las Vegas jury awarded his widow $4.5 million after finding that the vehicle's roof was defectively designed. (Photo courtesy Garcia Ochoa Mask law firm)

A Las Vegas widow was awarded $4.5 million this week in a product liability case against Ford Motor Co.

Jurors returned the verdict on Tuesday in favor of Teresa Trejo, whose husband was killed when their 2000 Ford Excursion rolled over in New Mexico on Dec. 16, 2009.

Texas lawyer Ricardo Garcia said jurors returned the verdict after finding that the vehicle’s roof was defectively designed. The Excursion, a heavy-duty sport utility vehicle, was manufactured for the North American market from 2000 to 2005.

“Everybody who’s got one has to be concerned,” Garcia told the Las Vegas Review-Journal on Friday.

Ford representatives could not be reached for comment Friday afternoon.

Garcia said Trejo and her 39-year-old husband, Rafael, were headed from Las Vegas to Mexico for Christmas when Trejo, who was driving, lost control of the vehicle.

She and her husband, who was asleep in the passenger seat, both were wearing seat belts. Her brother, a back-seat passenger, was not wearing a seat belt and was thrown from the SUV.

Garcia said the roof of the vehicle was crushed, causing it to bend and pin Rafael Trejo’s neck. The lawyer said Rafael Trejo was asphyxiated, but Ford argued that he died instantly in the crash.

Teresa Trejo and her brother were injured but survived. Garcia said the Trejos worked at The Venetian at the time, and Teresa Trejo continues to work in the Strip resort’s banquet department.