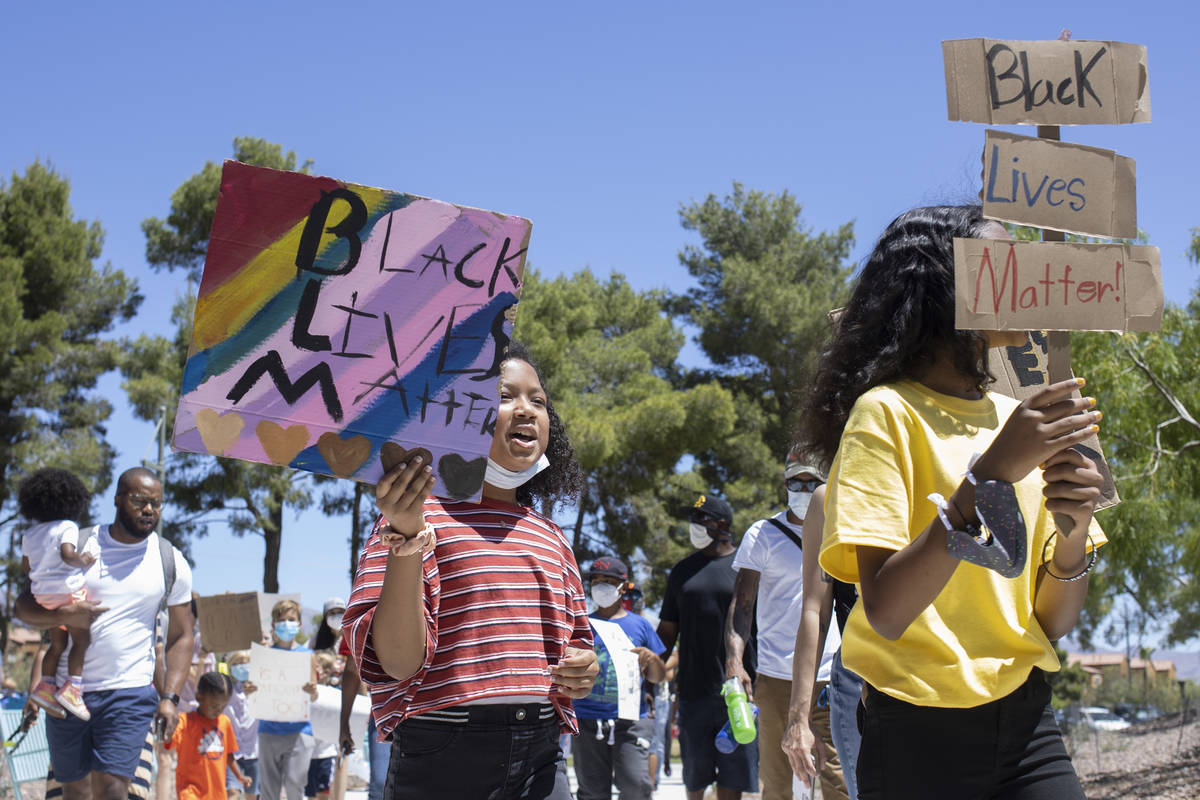 Ava Rose Turner, left, 8, and Kumei Tenorio-Norwood, right, 11, lead the "Kids Against Racism Rally" at Craig Ranch Regional Park on Sunday, June 14, 2020 in Las Vegas. The event, organized by Tenorio-Norwood, brought hundreds out to give kids a voice in the ongoing movement against racism in the United States. (Ellen Schmidt/Las Vegas Review-Journal) @ellenkschmidttt 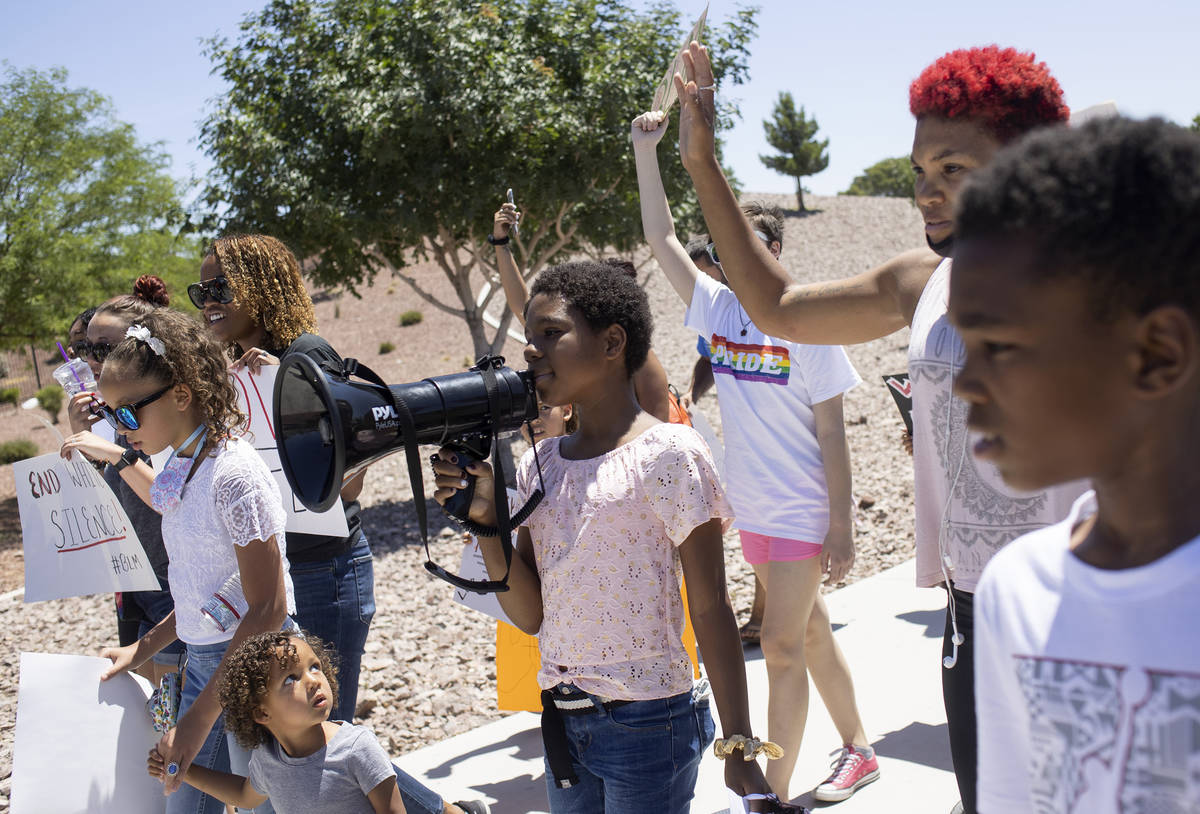 Chasadity Patterson-Hudson, center, 11, takes a turn on the megaphone to chant "no justice, no peace" during the "Kids Against Racism Rally" at Craig Ranch Regional Park on Sunday, June 14, 2020 in Las Vegas. (Ellen Schmidt/Las Vegas Review-Journal) @ellenkschmidttt 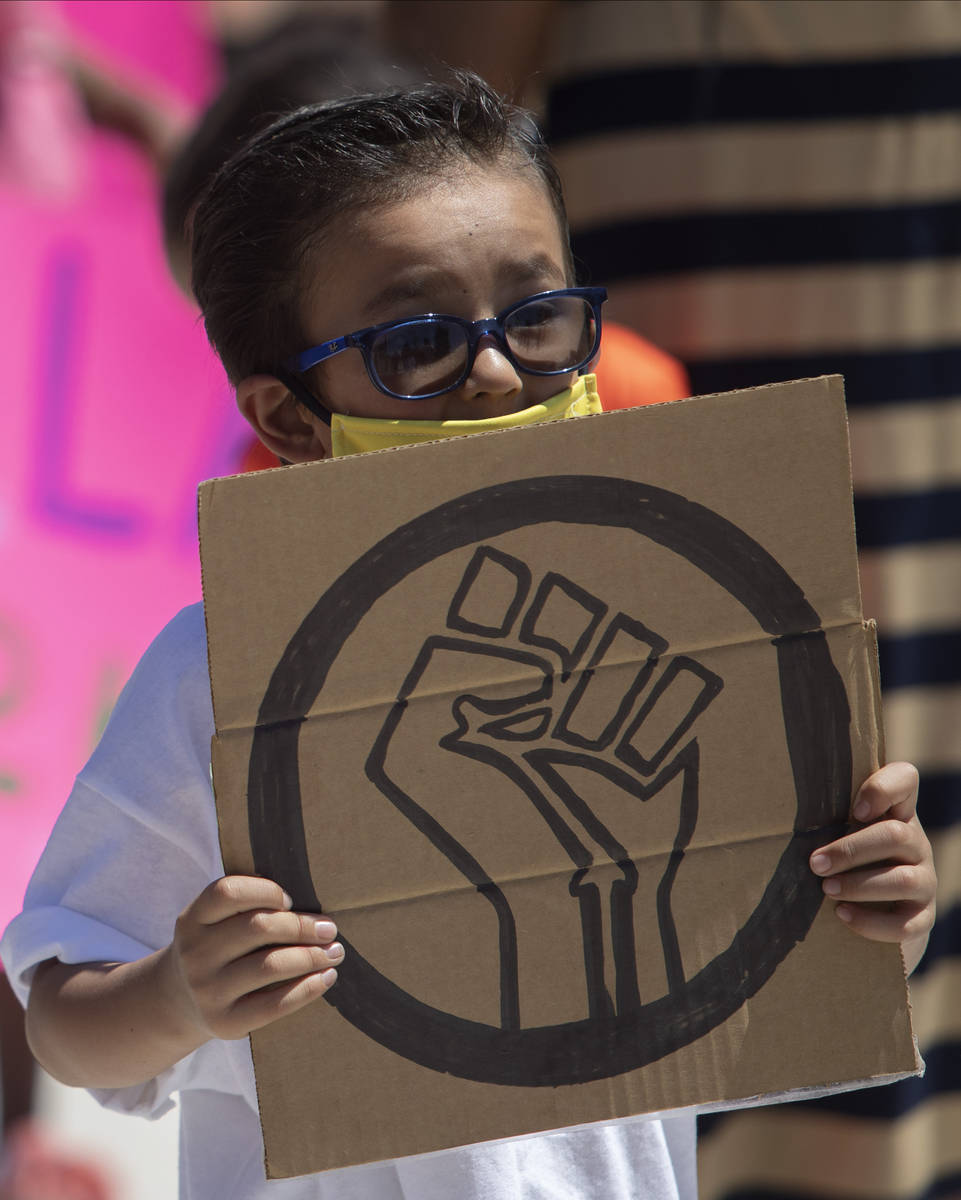 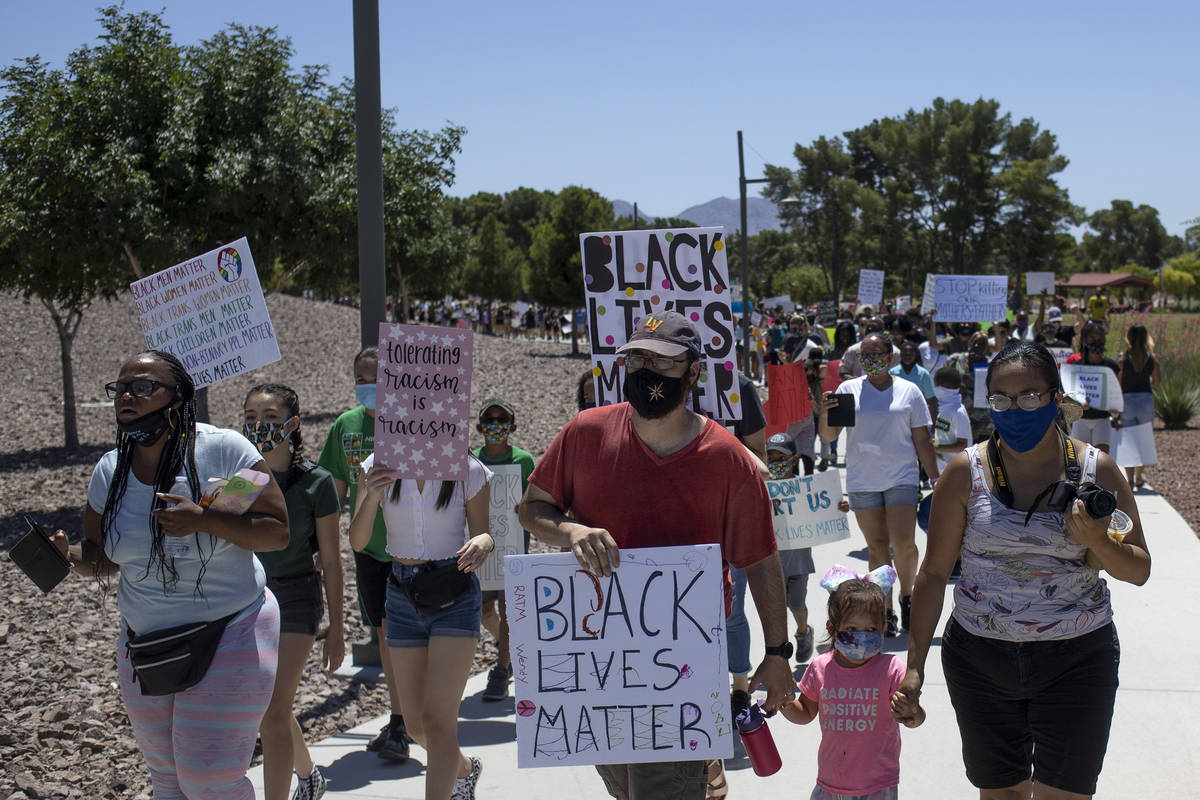 The "Kids Against Racism Rally" marches through Craig Ranch Regional Park on Sunday, June 14, 2020 in Las Vegas. The event, organized by Tenorio, brought hundreds out to give kids a voice in the ongoing movement against racism in the United States. (Ellen Schmidt/Las Vegas Review-Journal) @ellenkschmidttt 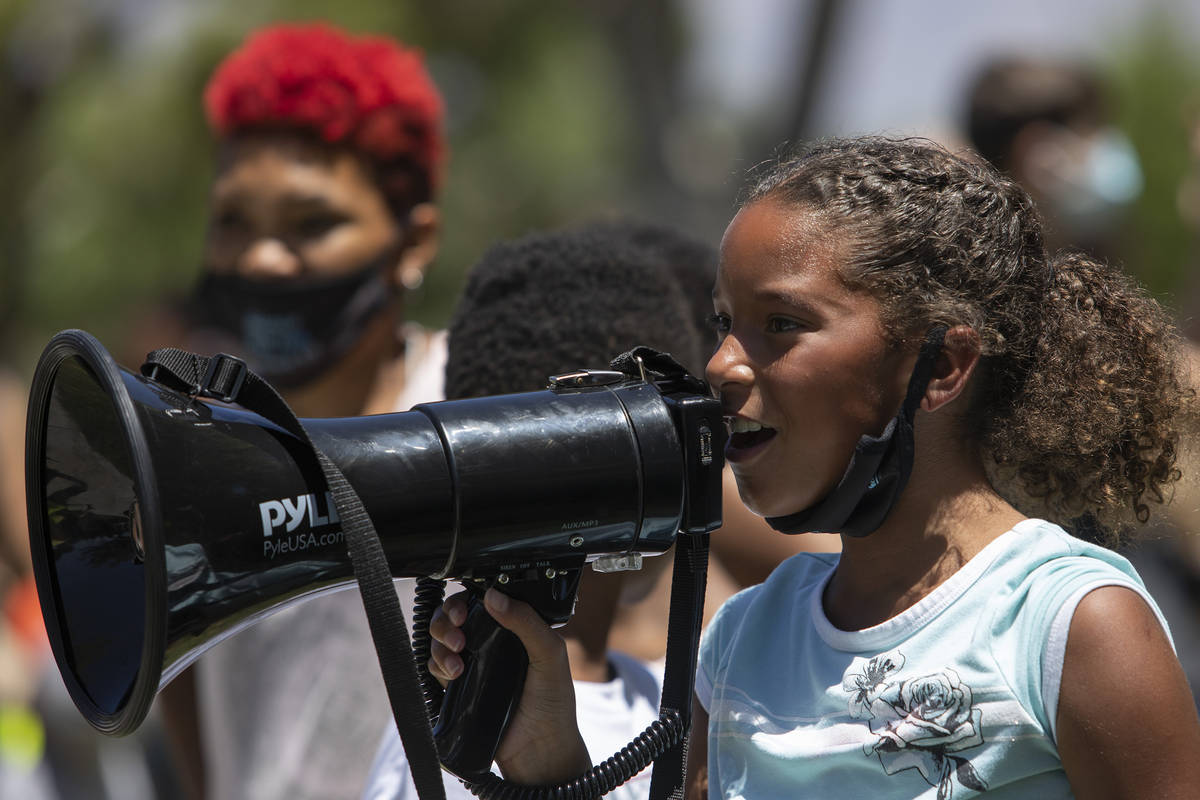 Paige Faggins, 9, takes a turn to chant into the megaphone at the "Kids Against Racism Rally" at Craig Ranch Regional Park on Sunday, June 14, 2020 in Las Vegas. (Ellen Schmidt/Las Vegas Review-Journal) @ellenkschmidttt 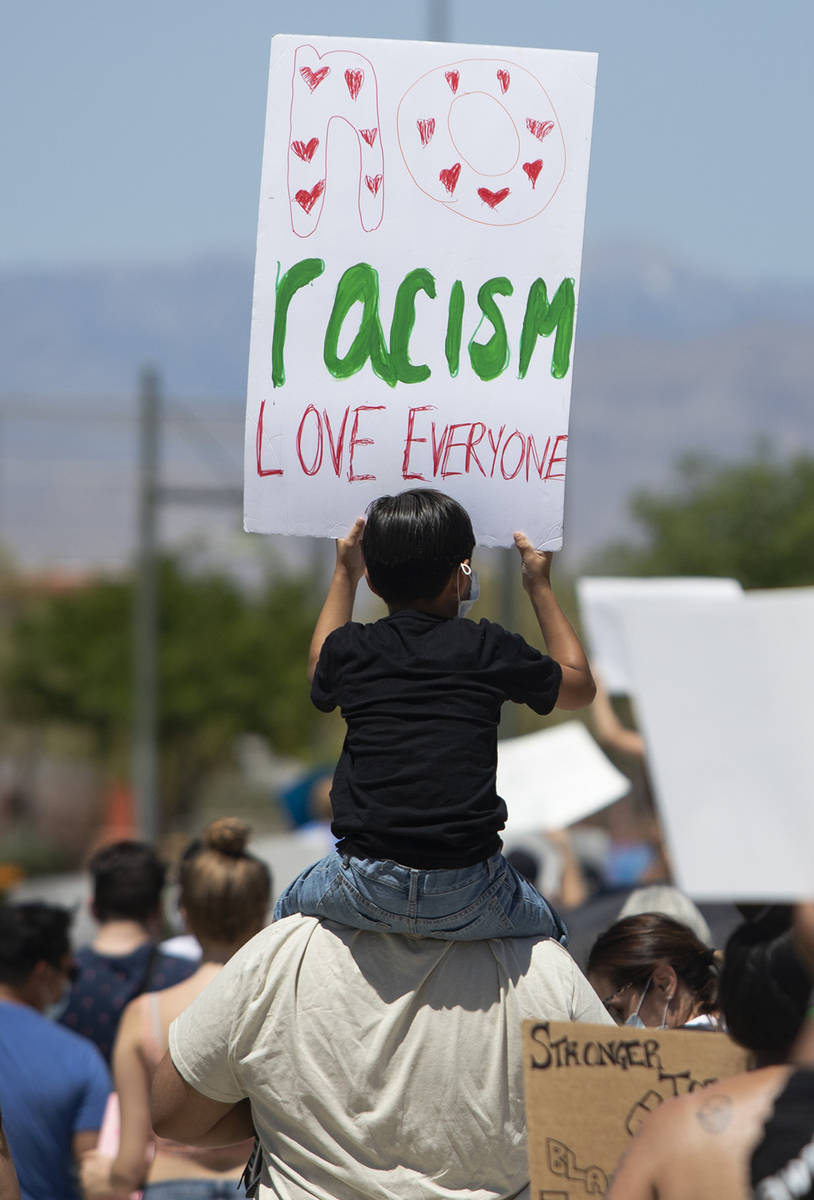 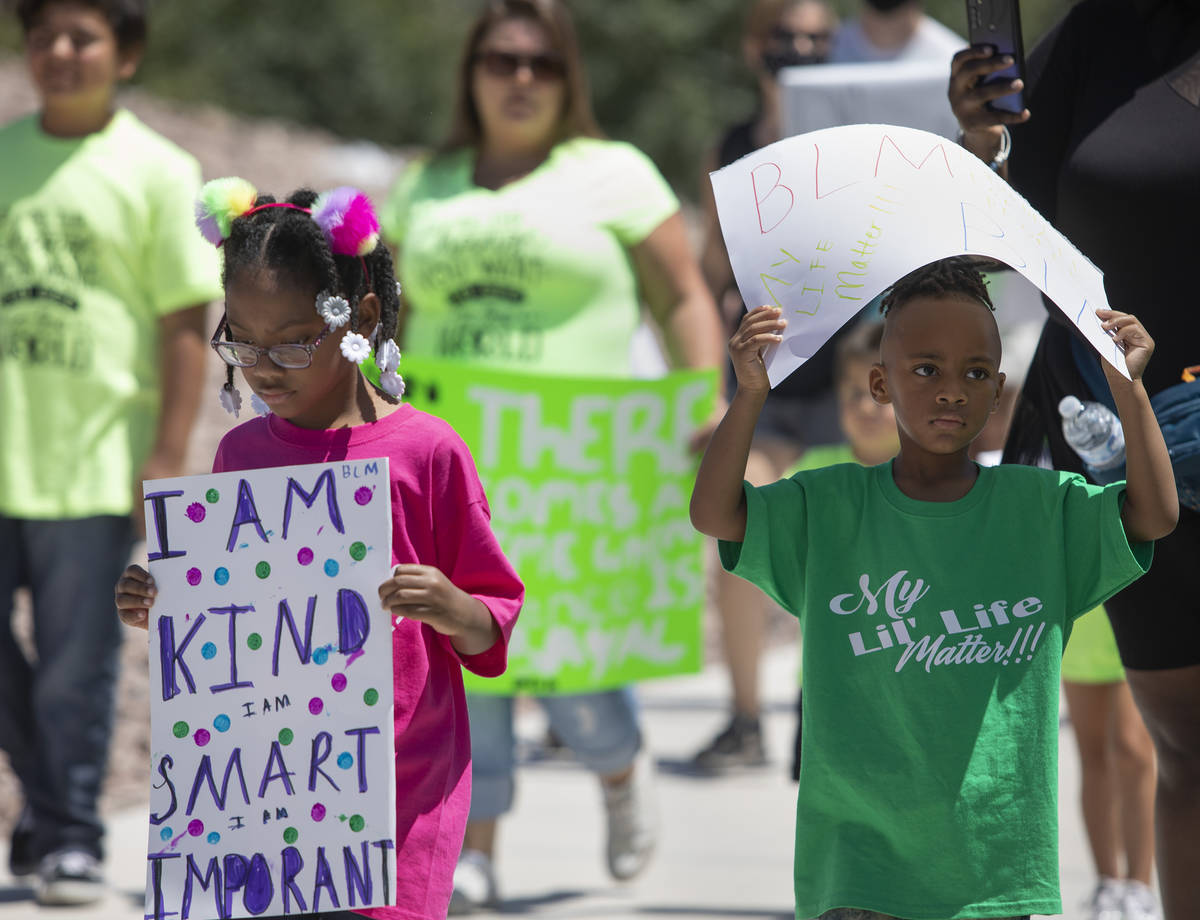 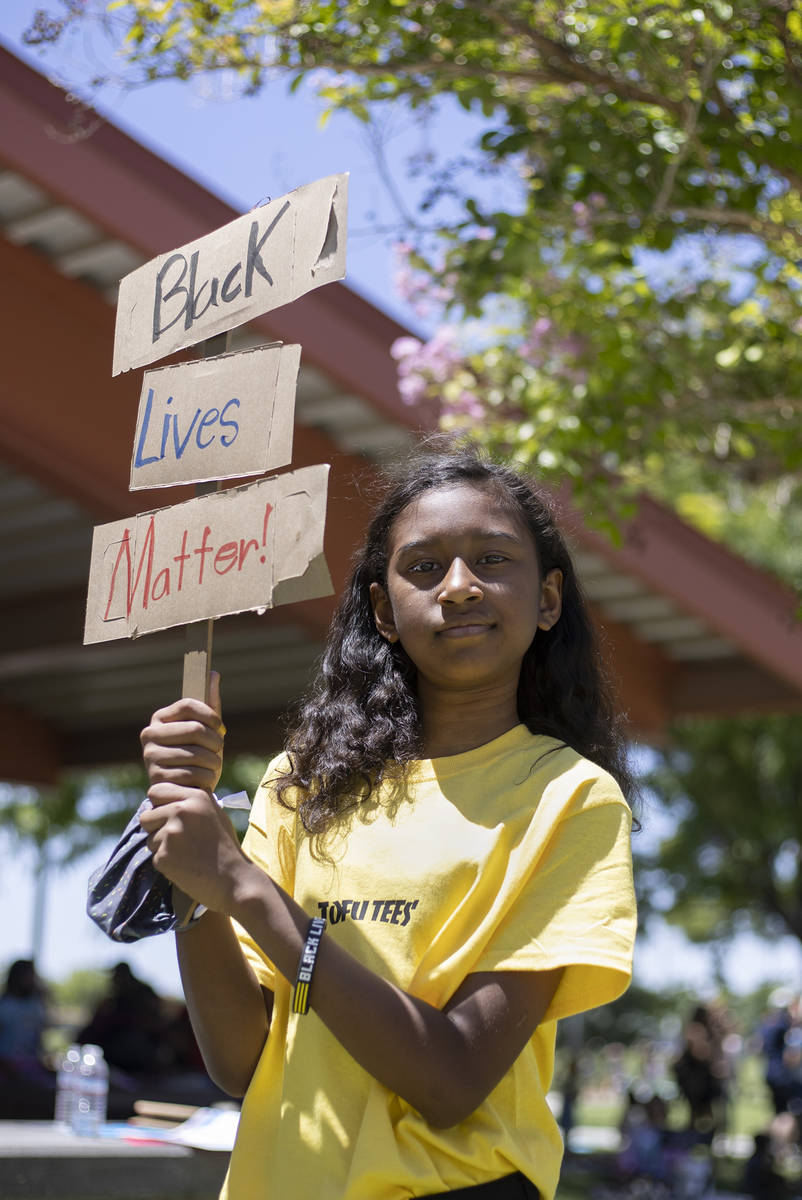 Kumei Tenorio-Norwood, 11, poses for a portrait following the "Kids Against Racism Rally," which she organized, at Craig Ranch Regional Park on Sunday, June 14, 2020 in Las Vegas. Tenorio-Norwood said she expected around 40 people to show up, but hundreds came out to march against racism. (Ellen Schmidt/Las Vegas Review-Journal) @ellenkschmidttt 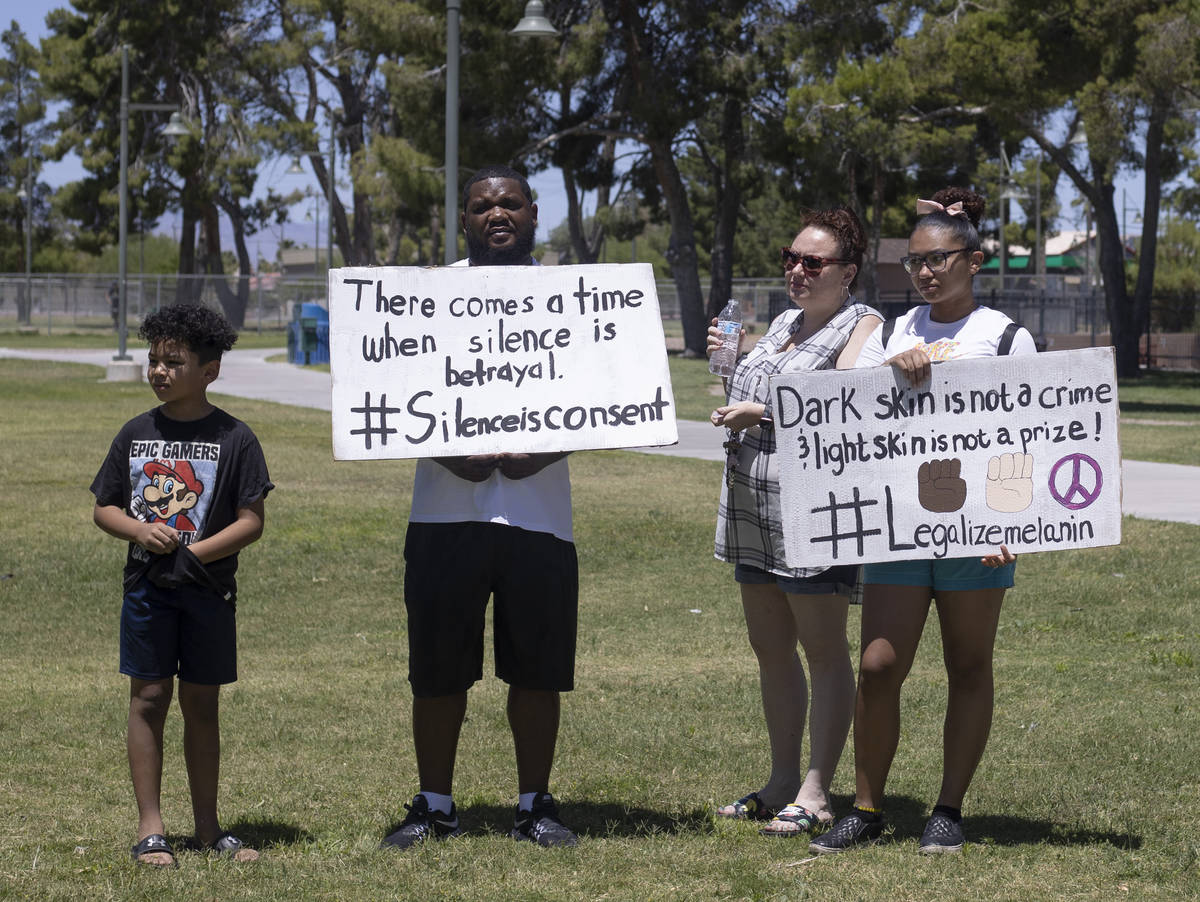 More than 100 children and their parents marched together against racism and police brutality Sunday at a North Las Vegas park.

Children chanted “Black lives matter, our lives matter, my life matters” as they circled the plaza at Craig Ranch Regional Park, led by 11-year-old Kumei Tenorio-Norwood, who organized the rally through social media.

“I wanted to do this because of how I feel about things that are happening right now, how black people are dying, and that made me think about other kids’ emotions,” Kumei said before the walk.

“I wanted them to be able to say something and bring it all out,” she said.

Kumei started Tofu Tees in 2017 after she found a funny phrase written on an old notebook and started putting it on shirts. She’s been an artist and entrepreneur since she was 5 years old and now sells her designs online.

More recently, she has begun giving away wish bracelets with beads that spell out “BLM,” asking that payment come in the form of donations to the Vegas Freedom Fund, which raises money to post bail for people who can’t afford it.

“We watched a lot of the protests, and then we watched the protests happening next to riots and they were, you know, unaffiliated,” said her mother, Tiarre Norwood. “We just wanted to give her and her friends a way to speak out.”

After she posted flyers for the rally on the Instagram and Facebook pages for Tofu Tees, people began contacting her to donate food and supplies.

Kumei expected fewer than 50 people to show up for the rally but quickly realized that many more would arrive after she saw how widely the posts were shared. The first thing she noticed, she said, was that her Instagram follower count jumped from just over 500 to more than 1,000.

Before the rally began, kids and parents made signs together to carry during the march.

Rae Clark brought her son, 2020 graduate Richard Clark, and her grandson Ceidon McCloud, because she wanted them to have some way to express their emotions and feel that their voices are important.

“You find yourself trying to find the words to explain to your kids, to your nieces and nephews, what is going on in life,” Rae Clark said as Richard held Ceidon on his lap and helped the toddler paint “Black Lives Matter” on a poster board.

After Kumei led the children in their own march, she allowed their parents to join for a longer march around part of the park.

They had scrawled their own messages on their posters, but they echoed the same messages seen at large-scale protests across the U.S.

After the march, the children played together while their parents cleaned up. Zach Dorsey, a young boy, led other children in chants with a megaphone and passed it around so that everyone had a turn.

Before the end of the day, his mother, Zyera Dorsey, borrowed it from him. She warned teenagers at the rally to stay away from the protest scheduled for Sunday night.

“Yesterday, we failed as adults because two 16-year-olds were arrested,” Zyera Dorsey said, referring to a Saturday night round of protester arrests that led Gov. Steve Sisolak to call for an investigation.

“You are spending hours in jail for nothing, and that’s not OK,” she said. “I appreciate from the bottom of my heart your support, young people, because one day you will be right here in my spot doing the exact same thing.”

Kumei was the last to speak. She quickly thanked everyone for coming out, then paused as the crowd applauded.

Then she added: “And black lives matter!”

And the crowd of children cheered louder.