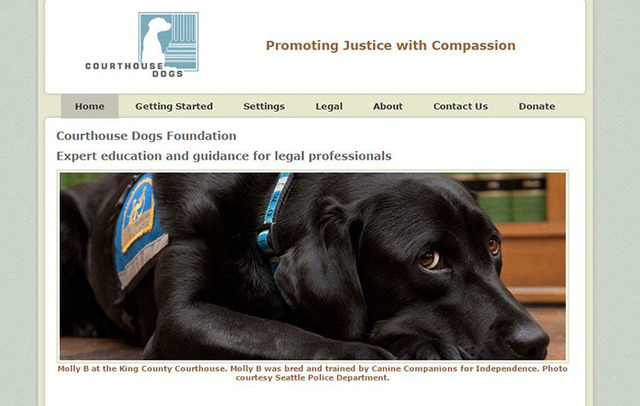 The website shows Molly B at the King County Courthouse in Seattle. (Screengrab/courthousedogs.com) 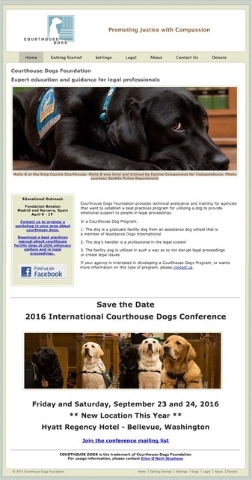 The courthousedogs.com website shows Molly B at the King County Courthouse in Seattle.

Young victims of Las Vegas crime may soon have a four-legged friend in court.

Clark County District Attorney Steve Wolfson wants to introduce a dog to the legal system in an effort to help comfort children.

“It’s all about victims,” Wolfson said. “It’s about making victims more comfortable. And it’s also about seeking the truth.”

Facility dogs are specially trained for courtroomlike settings, remaining quiet and unobtrusive while they sit or lie down beside a witness for lengthy periods, according to Ellen O’Neill-Stephens with the Courthouse Dogs Foundation, a nonprofit organization based in Bellevue, Washington.

“Really what the dogs are about: they make it easier for traumatized people to describe what happened,” she said. “They facilitate the fact-finding process at trial.”

Officials in the district attorney’s office are still exploring what it would take to bring a facility dog to the Regional Justice Center, Wolfson said, and it could be anywhere from six to 12 months before a canine accompanies a victim to court.

But Wolfson is excited about the prospect of having a comforting pup along with the victim witness advocates in his office.

“Even the judges and the prosecutors and the defense lawyers are more relaxed with the presence of these facility dogs in and about the courtroom,” he said. “We as lawyers become somewhat immune sometimes to the trauma that people go through just walking in this building, let alone being the victim in a case and having to see the perpetrator in the same room. It’s very traumatic.”

The cost to taxpayers could be next to nothing, according to O’Neill-Stephens.

Canine Companions for Independence, a nonprofit organization with six facility dog training campuses around the country, offers facility dogs to prosecutors for free, she said. A handler, perhaps an investigator in the district attorney’s office, would only have to pay for meals and transportation during a two-week training session. Trained from birth and able to assist by age 2, the dogs can work in courts for upward of eight years.

While this would be the first in Nevada, more than half of the states across the country use facility dogs in some legal capacity, according to O’Neill-Stephens. By the end of this month, 100 dogs are expected to be working with prosecutors and victim services in the U.S.

And it’s a trend growing internationally. Programs have been introduced in Canada, Chile and Spain.

About five years ago, O’Neill-Stephens retired as a Seattle-area prosecutor to focus on her work with facility dogs. At the time, fewer than 30 dogs were being used in courthouses around the country.

Like anything that happens in a courthouse, however, there’s been resistance. In some states, defense lawyers have objected to having a facility dog alongside a victim in front of a jury, which O’Neill-Stephens called “a legitimate concern.”

Jurors may favor a witness because of the dog, so courts have taken steps to make sure the dog’s presence isn’t influential in verdicts.

The dogs are typically brought to court outside of a jury’s presence, resting and hidden at the victim’s feet on the witness stand. A judge will instruct the jury of the dog’s existence and that it should not be considered when weighing the credibility of a witness or in deciding guilt or innocence.

Appellate courts in six states — California, Connecticut, Florida, New York, Ohio and Washington — have upheld the use of facility dogs. Last year, Arkansas and Illinois passed laws that allow child witnesses to be assisted by dogs in criminal proceedings.

Victims and witnesses can often become frustrated with a drawn-out judicial system, and the Clark County District Attorney’s office has eight victim advocates to help them better understand the process, but sometimes even those efforts may not be enough.

“There’s a huge difference between dogs and victim advocates,” O’Neill-Stephens said. “Humans have a special bond with dogs that they don’t have with other humans. Dogs are very nonjudgmental, and that’s very important for a person who has been victimized … When they have a dog present, people are much more willing to come back because the dog is there to be with them, and they can feel more comfortable about being there.”