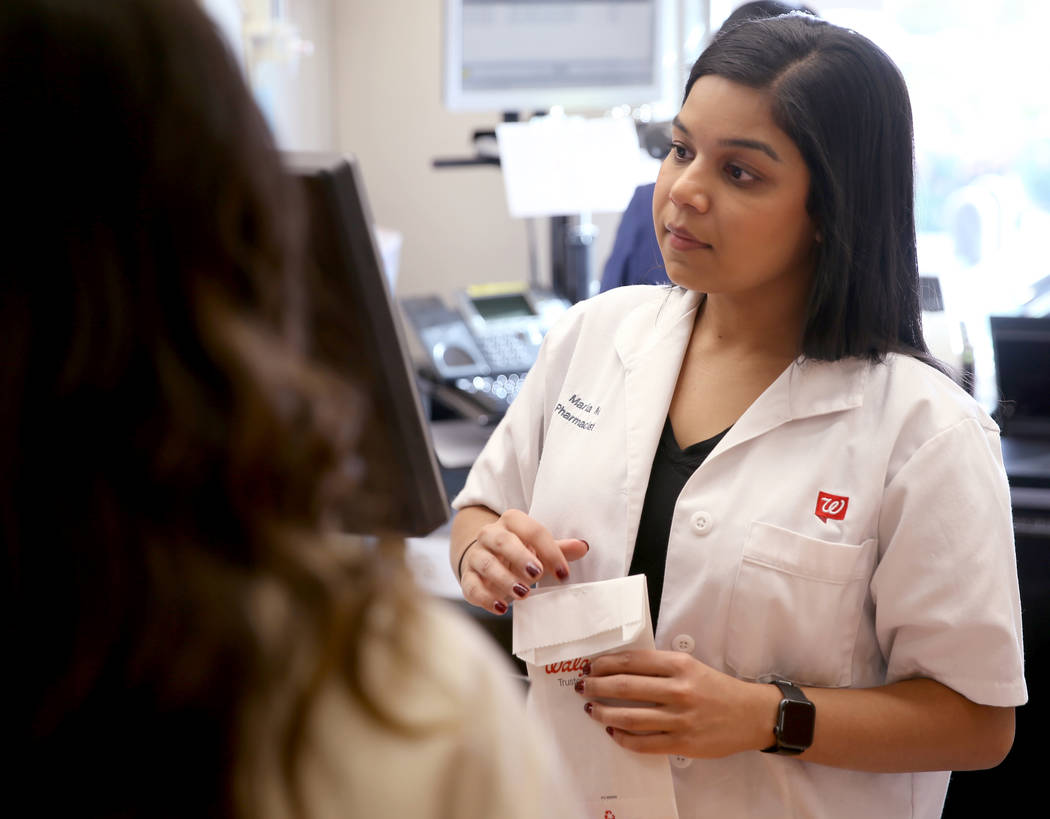 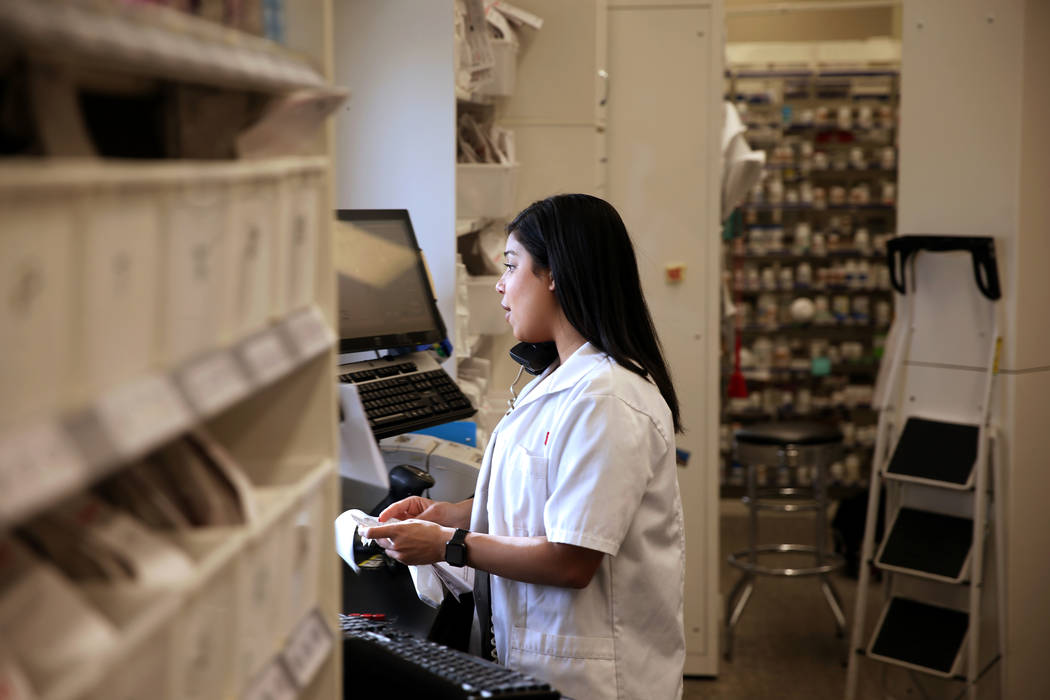 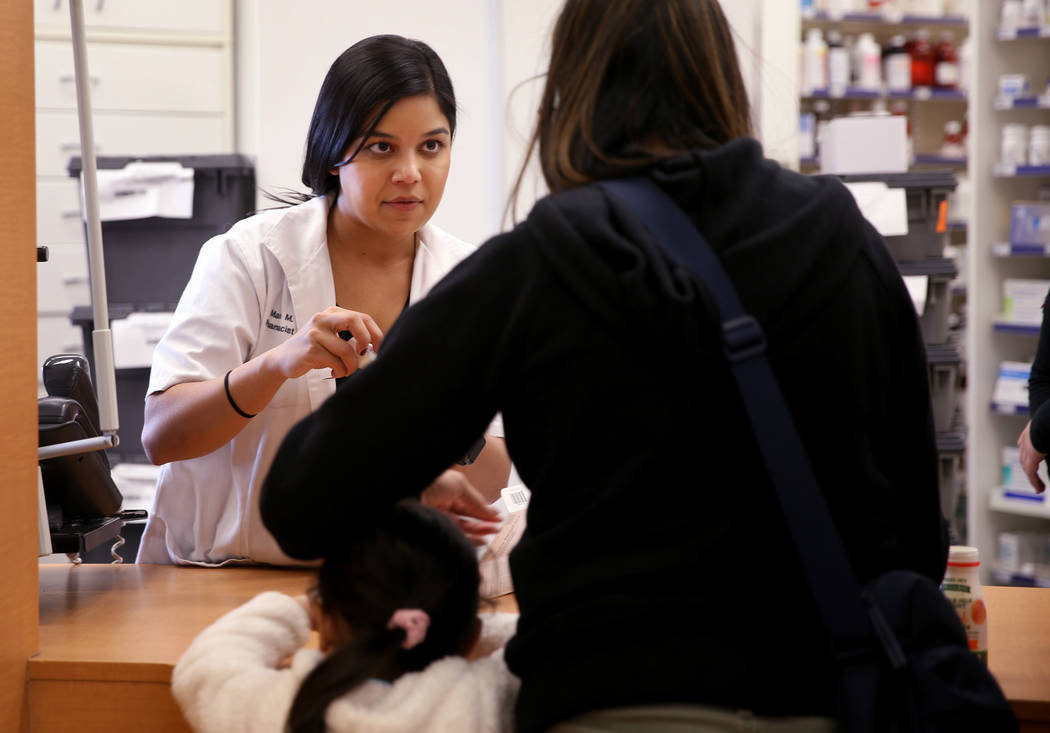 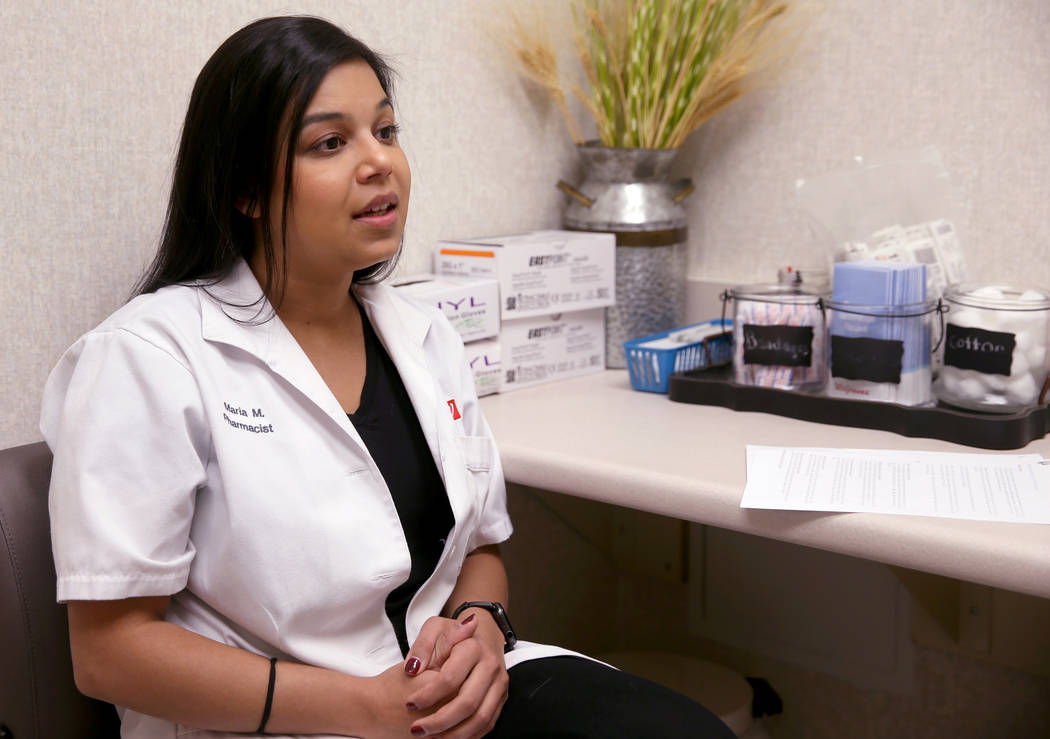 Pharmacy Manager Maria Masood talks to a reporter about high flu activity in Las Vegas and Nevada at the Walgreens pharmacy on Blue Diamond Road in Las Vegas Thursday, Nov. 14, 2019. Based on flu prescriptions, Walgreen's flu index shows that Las Vegas is the No. 4 market for flu activity and Nevada is the No. 2 state. (K.M. Cannon/Las Vegas Review-Journal) @KMCannonPhoto 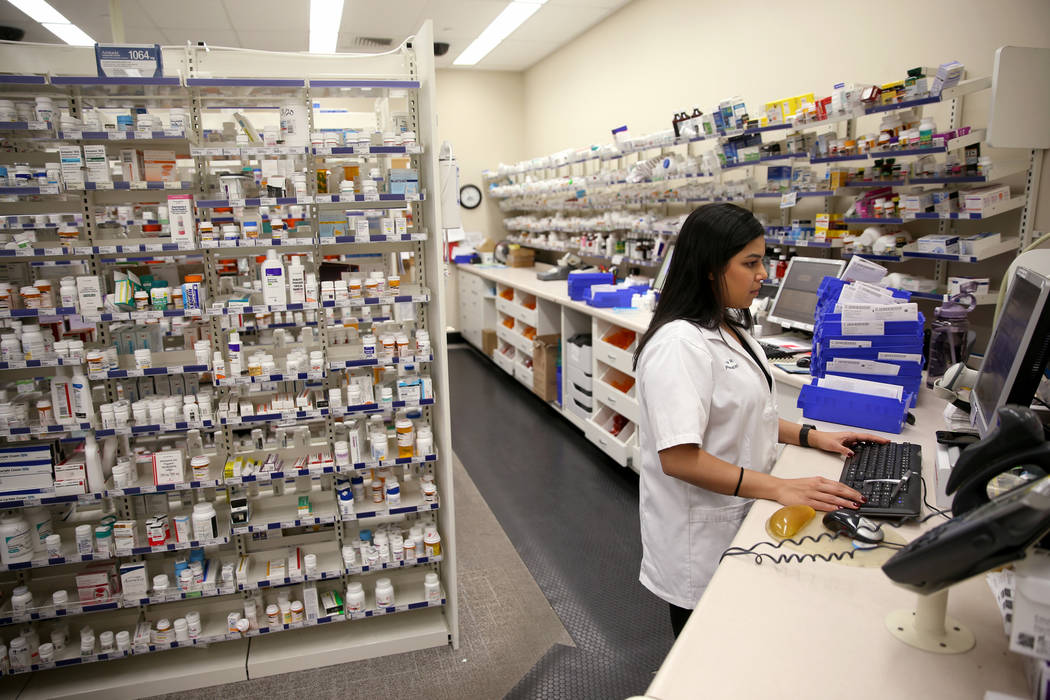 Nevada is the No. 2 state for flu activity behind Louisiana, and Las Vegas is the No. 4 metropolitan area in the country, according to a new flu index that uses data on prescriptions to treat the virus.

Each week Nevada and Las Vegas “have been trending higher and higher” on the Walgreens flu index, said Patrick Korellis, a researcher for the drugstore company.

The index is compiled using retail prescription data from across Walgreens pharmacies nationwide for antiviral medications such as Tamiflu that are used to treat influenza. The index shows low levels of flu activity across most of the country, with higher activity concentrated in the Southeast.

With the exception of Las Vegas, the 10 market areas with the highest incidence of flu are in the Southeast, with Lafayette, Louisiana, coming in first on the index.

“As for Thanksgiving, during travel times we typically see the virus move more as people are going from one part of the country to others and coming in close contact at places like airports,” said Megan Boyd, a spokeswoman for the drugstore company.

“There could be people coming from the South to Nevada, but it would be difficult to make a direct correlation as to that being a reason why Nevada is seeing higher activity” this year compared to this time last year, she said.

A flu index map compiled by the Centers for Disease Control and Prevention generally shows a low incidence of flu activity across the country, except in Louisiana and Puerto Rico. The map uses outpatient visits to health care providers for influenza-like illnesses to measure activity within a state, according to the CDC’s website.

Vit Kraushaar, a medical investigator for the Southern Nevada Health District, said health care providers without access to the rapid flu test might be prescribing antiviral medication for flu-like illnesses that aren’t actually the flu, which could inflate the Walgreens data.

Kristen Nordlund, a spokeswoman for the CDC, said making a comparison between the Walgreens index and the CDC’s “would be comparing apples to oranges” because they use different metrics.

Figures released in the past week by the Southern Nevada Health District show flu-related hospitalizations are five times higher than they were at this time last year. Kraushaar said this doesn’t necessarily mean a severe flu season is ahead, “but it’s certainly concerning at this point.”

As of Nov. 2, 64 people had been hospitalized with the flu in Clark County this season, according to health district data. At this time last season there were only 12 reported hospitalizations.

There also has been one flu-related death this year in Clark County, whereas there were none by that time last year.

The high number of hospitalizations suggests an earlier flu season and possibly a more severe one, said Dr. David Weismiller, a professor at the UNLV School of Medicine.

“Those tend to go hand in hand,” Weismiller said. “It’s why we’ve been continuing to urge people to get vaccinated. That’s the most important piece in terms of prevention.”

According to the CDC website, Nevadans have the lowest flu vaccination rate in the nation, estimated at 34 percent.

Maria Masood, pharmacy manager at the Walgreens on Blue Diamond Road and Durango Drive, said she has observed more customers coming in earlier this year to get their flu shots and pick up prescriptions for antiviral medication to treat the flu.

Last week 150 customers got their flu shots at her pharmacy, she said, noting the shot is free with most insurance plans.

Because she’s observed greater awareness of the flu in customers, Masood said, “I’m really hoping that this year will be mild compared to last year.”