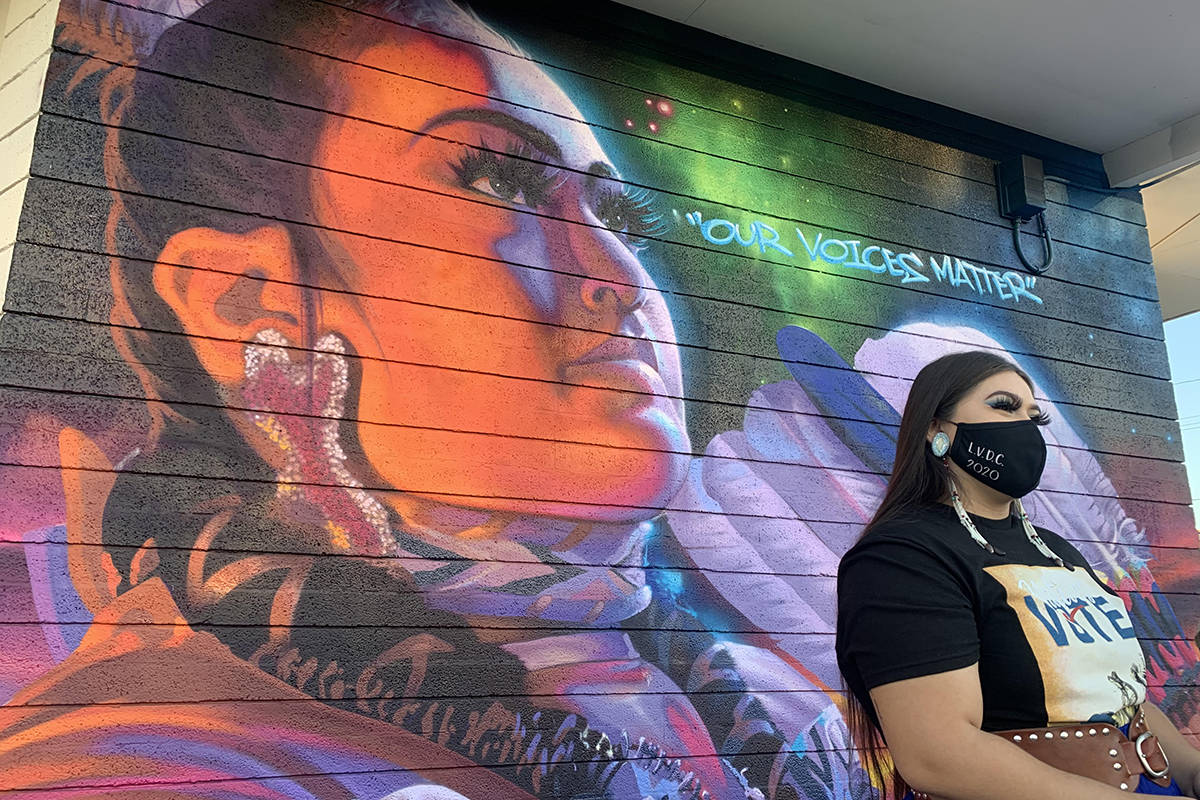 Amaia Marcos, 19, poses in front of the Las Vegas Indian Center's new "Our Voices Matter" mural, which was painted in her likeness by local artist Gear Duran. (Alexis Ford/Review-Journal)

About 50 people gathered at the Las Vegas Indian Center on Monday evening for the unveiling of an “Our Voices Matter” mural in honor of Indigenous Peoples Day.

The mural, painted by local artist Gear Duran, features a colorful rendering of Amaia Marcos, a 19-year-old physics student at the College of Southern Nevada who helped plan the project. Marcos said she never intended for her face to be used, but that she wanted the mural to provide an image for indigenous youth to look up to.

“Growing up we only had cartoons that looked like us, and they were usually racist,” Marcos said. “I wanted to give today’s indigenous youth a real person to look up to.”

She said Duran was the one who convinced her to let him paint her face on the mural, which covers the southwest corner of the building at 2300 W. Bonanza Road, near Rancho Drive.

“Her demeanor, spirit and energy came through immediately and I knew it had to be her,” Duran said. “And I thought it was so great to have a real person, a real member of the community, for kids to look up to.”

The mural unveiling, which began at 5 p.m., focused heavily on the importance of the native vote in the upcoming election. Ryan Boone, president of UNLV’s Native American Student Association, said three words came to mind when he saw the mural: power, courage and resilience.

“We have the power to create a better future for the future generations,” Boone said. “When we see something wrong in our communities, or forms of oppression aimed at our people, we have the courage to fight back and demand justice and equity. This government has long tried to put our people down and assimilate us, yet they have always failed, and we have always pushed back.”

Vinny Spotleson, who attended on behalf Titus, said that as an Italian American, he stands with the native community in not wanting Christopher Columbus to represent the nation. He referenced Columbus’ diaries from when he discovered the Americas, citing plans to enslave the native people.

“Every time we hold Indigenous Peoples Day events, every time murals like this go up, every time we reclaim that power and reclaim this day, we move a step forward toward justice,” Spotleson said. “But we have a long way to go.”