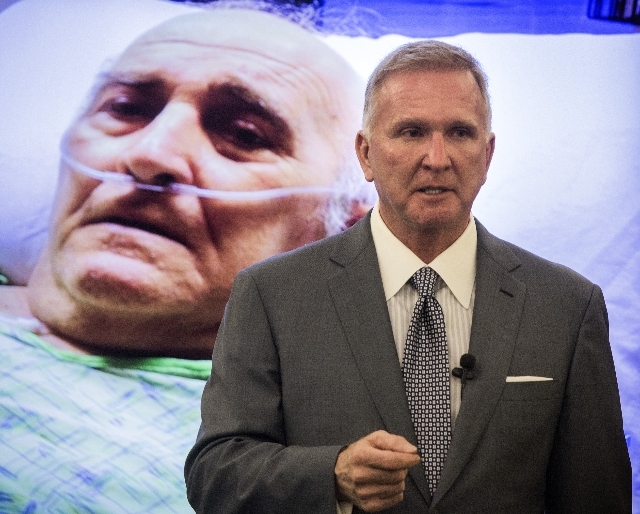 A video screen image of Maurice Iorio, who died from bladder cancer complications in November 2013, is seen while attorney Robert Eglet speaks during opening statements in the trial involving the diabetes drug Actos on Thursday, Aug. 27,2015 at the Regional Justice Center, 200 Lewis Avenue. JEFF SCHEID/LAS VEGAS REVIEW-JOURNAL Follow him @jlscheid 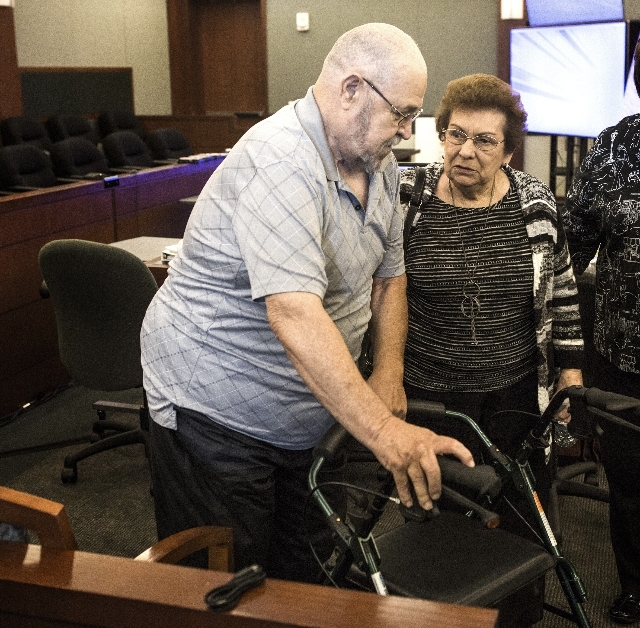 George Decou,left, who is suffering from bladder cancer and Mary Iorio, the widow of Maurice Iorio, who died from bladder cancer complications in November 2013, talk during a break in the opening statements trial involving the diabetes drug Actos on Thursday, Aug. 27,2015 at the Regional Justice Center, 200 Lewis Avenue. JEFF SCHEID/LAS VEGAS REVIEW-JOURNAL Follow him @jlscheid

Atlanta attorney Lori Cohen, who represents the Japanese company Takeda Pharmaceutical, made the comment during her opening statement to jurors in a product liability case. The Las Vegas trial centers on two Southern Nevada men who were diagnosed with bladder cancer after taking Actos.

“When this case is over, our team will stand before you all, based on the science and medicine, hard facts, the evidence and the proof, and ask you for a full defense verdict on behalf of our client and for this tremendous drug Actos that has really brought so much good to the world and is so safe and effective,” the lawyer said. “We feel very strongly about that.”

Lawyers for the plaintiffs have indicated they plan to seek a $2 billion verdict against the pharmaceutical company.

The plaintiffs are Mary Iorio, the widow of Maurice Iorio, and George Decou. Maurice Iorio, who once worked as a bailiff in Clark County District Court, was 74 when he died in November 2013 from complications of bladder cancer. Decou, 77, was diagnosed with bladder cancer four years ago.

“There’s not a single person in the courtroom who does not feel sympathy for what they’ve been through,” Cohen told jurors.

Thousands of people across the country have filed product liability lawsuits against Takeda, which makes the prescription drug pioglitazone under the trade name Actos. They have accused the company of failing to inform consumers and medical professionals about the risk of bladder cancer associated with the use of Actos, which went on sale in the United States in 1999.

In 2011, the Food and Drug Administration issued a safety announcement stating that use of Actos for more than one year may be associated with an increased risk of bladder cancer. Generic pioglitazone was approved in 2012, after Takeda’s patent expired.

Cohen said data from a 10-year study conducted by Kaiser Permanente Northern California and the University of Pennsylvania did not show a statistically significant relationship between Actos and bladder cancer. Results of the study were published in The Journal of the American Medical Association last month.

The lawyer also noted that both Maurice Iorio and Decou had a history of smoking, although they had given up the habit years before they were diagnosed with cancer.

Decou’s lawyer, Will Kemp, told jurors on Thursday that Richard Nixon was president when his client stopped smoking.

But Cohen said any history of smoking is considered a risk factor for bladder cancer.

Cohen said Actos, which has been approved in 87 countries, is an important drug for treatment of a devastating disease that leads to severe problems. Diabetes causes more deaths than bladder cancer, she said.

District Judge Jerry Wiese II is presiding over the trial, which is expected to last several weeks. He informed jurors that Takeda had intentionally destroyed information related to the case and that they could presume the information would have been unfavorable to the defense.

Cohen said Takeda will meet its burden of showing that the destroyed information was not unfavorable to the company.