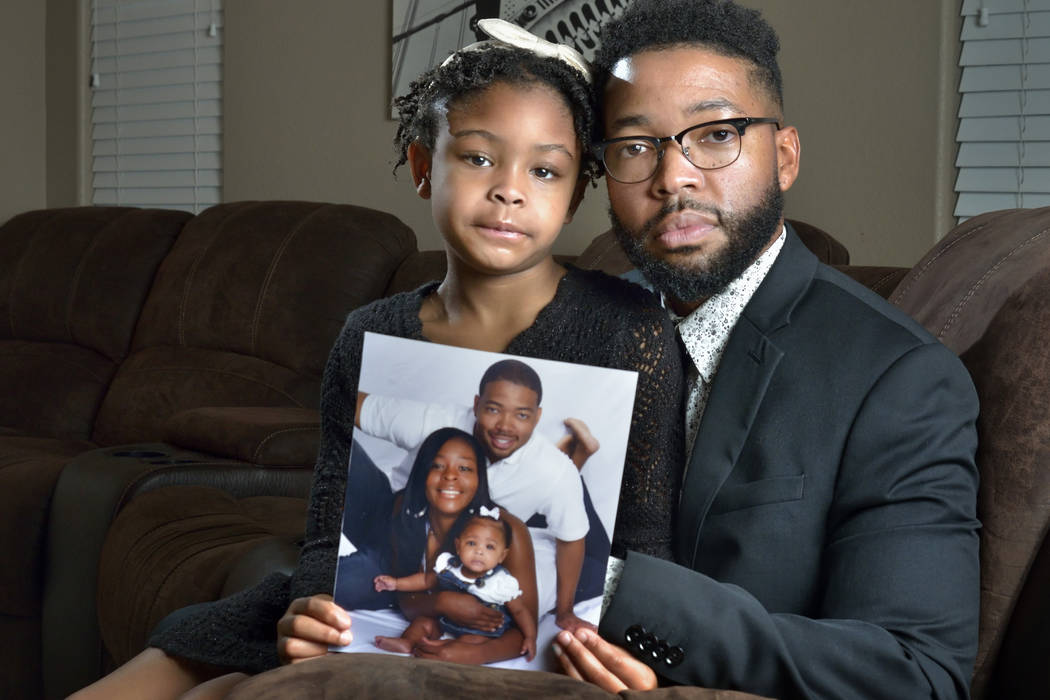 Brooklynn Murray, 7, is shown with her father Dwayne and a family portrait with her mother LaQuinta at their home in Las Vegas on Monday, Jan. 28, 2019. The Murrays won a $42 million settlement against Centennial Hills Hospital after a jury ruled the hospital had breached standard of care policies and was responsible for LaQuinta’s 2013 death. Bill Hughes/Special to the Las Vegas Review-Journal 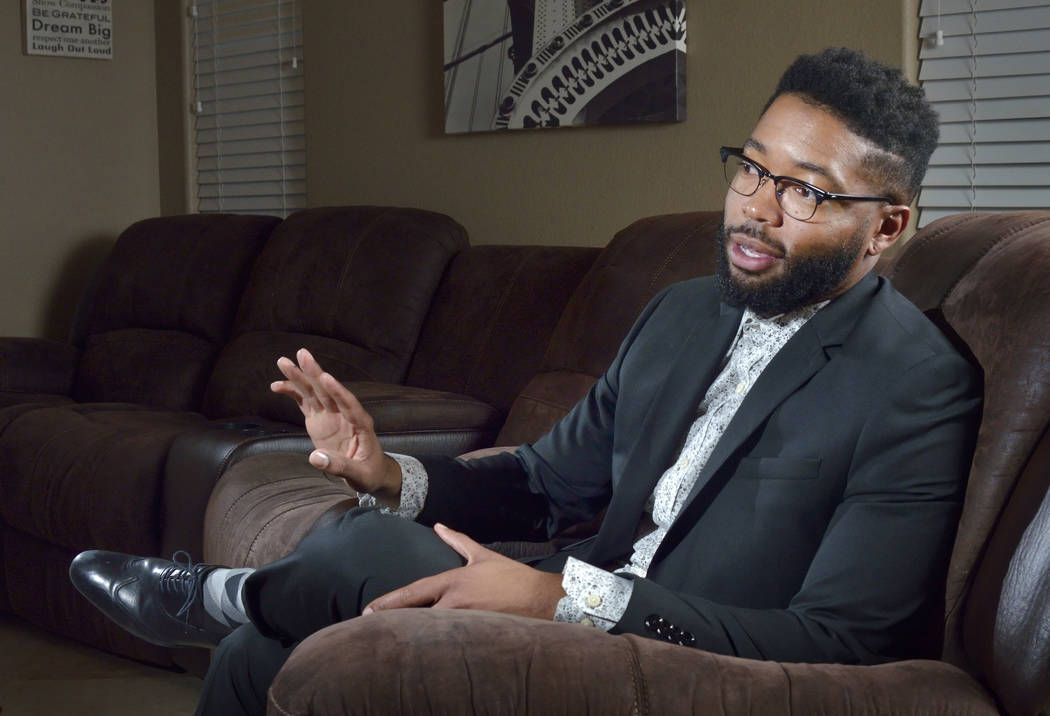 Dwayne Murray is shown during an interview at his home in Las Vegas on Monday, Jan. 28, 2019. Murray won a $42 million settlement against Centennial Hills Hospital after a jury ruled the hospital had breached standard of care policies and was responsible for his wife’s 2013 death. Bill Hughes/Special to the Las Vegas Review-Journal 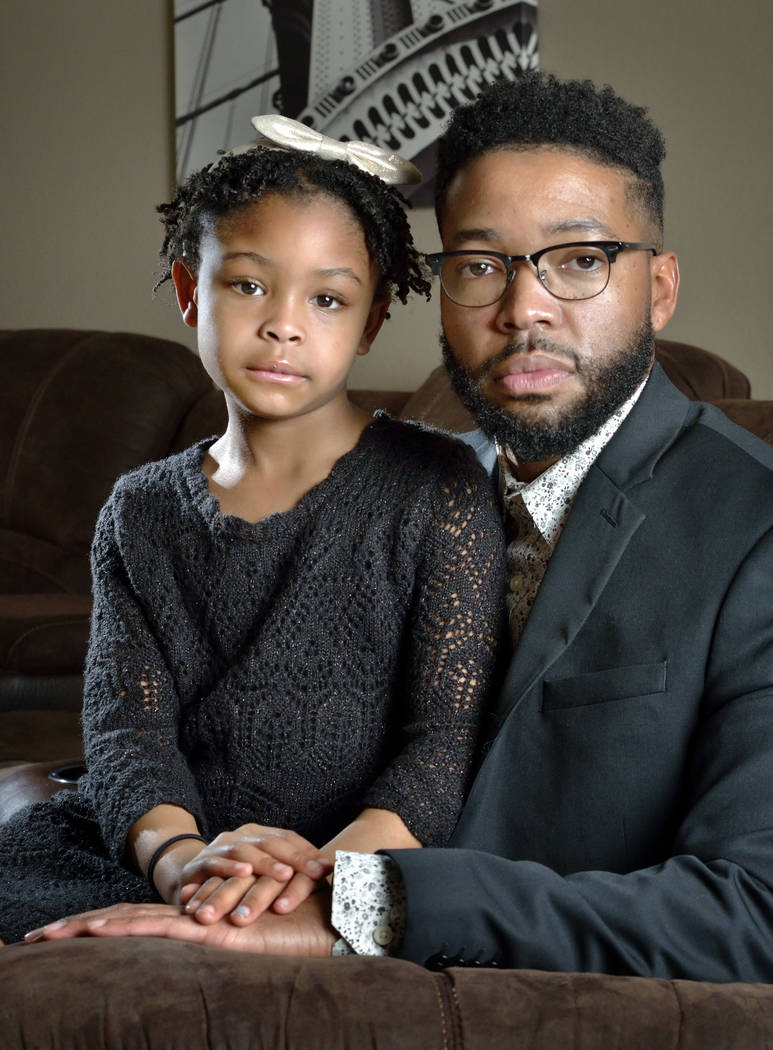 Brooklynn Murray, 7, is shown with her father Dwayne at their home in Las Vegas on Monday, Jan. 28, 2019. The Murrays won a $42 million settlement against Centennial Hills Hospital after a jury ruled the hospital had breached standard of care policies and was responsible for the 2013 death of Brooklynn's mother. Bill Hughes/Special to the Las Vegas Review-Journal

A framed portrait of LaQuinta Whitley Murray hangs in her 7-year-old daughter’s bedroom.

In it, the woman in her late 20s is pregnant. She’s standing tall, side to the camera, her left hand proudly glued to her hip, her glossed lips parted into a beaming grin.

Whitley Murray was thrilled to become a mom, her husband, Dwayne, recalled from his northwest Las Vegas home on Monday.

The memory, though sweet, is also one of sorrow. A week ago, Murray, 37, the owner of a local State Farm insurance branch, was awarded $43 million by a jury that found Centennial Hills Hospital in Las Vegas at fault for Whitley Murray’s untimely death. The mammoth award was based on testimony indicating that a doctor at the hospital gave her excessive doses of an anti-inflammatory drug that killed her.

The case has been long and grueling, but even though the hospital has indicated it is likely to appeal the award, Dwayne Murray said the fight has been worthwhile.

“I’m happy that her life gets to affect millions of others and change others,” he said. “Health care will improve.”

The girl next door

LaQuinta was the girl next door. She grew up in a home eight houses down from Dwayne’s in North Las Vegas.

She was like a little sister to Dwayne, who spent much of his free time playing football with her three brothers.

They lost touch when Dwayne moved to Mississippi to attend college, but when he returned to Las Vegas in 2001 her brother rode up on his bike and said, “Hey, LaQuinta wants to see you,” he recalled this week.

He thought that was a little odd, but he obliged. He remembers washing his car before driving over to see his childhood friend.

Shortly afterward, LaQuinta stopped calling. Dwayne wondered if he was being ghosted.

Only later did he find out she had been suffering through a “pain crisis” brought on by sickle cell disease, a rare condition in which the hemoglobin in red blood cells causes them to stiffen into rod-like shapes. The pain, which can be severe, occurs when those rod-shaped blood cells adhere to the walls of blood vessels and block oxygen flow.

Afterward, Dwayne read up on LaQuinta’s disease and stayed by her side during subsequent attacks, as her body worked through the pain.

That’s why he didn’t worry much when LaQuinta called him on April 20, 2013, as he was driving to meet a visiting college friend to say her back and legs were in pain.

LaQuinta hadn’t yet been admitted when Dwayne arrived at Centennial Hills Hospital. In the lobby, the two began to pray.

“I wanted to just make sure that the crisis would subside,” he said.

The stereo in Dwayne’s 2000 Ford Taurus vibrated with the tunes of Stevie Wonder and Whitney Houston at the start of the couple’s relationship.

“Sunday afternoons, we’d go cruising after church,” he remembered. LaQuinta loved music, and together, they went bowling or to the movies.

“We just developed a love for one another,” Dwayne said.

In married life, LaQuinta, a certified nursing assistant and, later, a stay-at-home mom, learned to cook according to family tradition. She made the best roasted chicken, mac and cheese and peach cobbler, Dwayne said.

Her mother and aunts were grooming her to be the next “big mama.” One recipe after the next, LaQuinta became the host of monthly family gatherings, he said.

“That’s how she expressed her love,” said Dwayne, who recalled his once full figure. “She had an old soul for such a young woman.”

Dwayne spent that Saturday night at the hospital with his wife. He went out to Arby’s on Sunday and brought her lunch.

Nothing seemed out of the norm, he said.

LaQuinta’s mother, Rochelle Calhoun, brought Brooklynn, their then-year-old daughter, to visit her mom. But LaQuinta was lethargic, just “not there,” Dwayne said.

“We knew the routine, like we’re going to be in and out, but we started to see that things weren’t going that way,” he said.

Tuesday afternoon rolled around. LaQuinta couldn’t hold a conversation or open her eyes.

Dwayne remembered asking her, “Babe, you know who I am?”

She replied, “Yeah, you’re my husband.” Despite Dwayne’s hopes that LaQuinta was just tired from the drugs, he had a lingering feeling that something wasn’t right.

For the first time since LaQuinta had been admitted, Dwayne went home to sleep that night. When he returned the next day, his wife was in restraints — the hospital didn’t explain why — though still lethargic and seemingly unresponsive.

“That’s when I walked into a nursing station and I said, ‘What’s going on?’” Dwayne recalled. He wondered: Were there any hints to the cause in her lab work? Was it the pain medication? And what were they prescribing her?

Dwayne had a meeting scheduled so he went to work. He was in the middle of it when his phone rang.

“It was the nurse saying, ‘Your wife has gone into cardiac arrest. It’s really important you get here to the hospital,’” Dwayne remembered.

Hospital staff were performing CPR on LaQuinta when Dwayne arrived. He had to look away, as watching his wife’s body bouncing as clinicians performed chest compressions was unbearable.

Soon after, LaQuinta Murray was pronounced dead at the age of 29. Wailing loved ones packed the waiting room, but Brooklynn, unaware that her mother had died, was calmly giving hugs to the mourners.

“What now?” Dwayne thought to himself. “What is it? How is it? How do I explain this?”

“I immediately started to just wonder for her,” Dwayne said, referring to his daughter. “What am I going to do to protect her?”

Dwayne was nervous about becoming a dad at first, he said. He laughed as he joked that a big wedding and babies tended to be in his wife’s dreams more than his own.

But LaQuinta reassured him, saying, “I got this.”

The couple had been trying for months to get pregnant when LaQuinta waved a positive pregnancy test in the air and exclaimed, “Guess what?”

“For LaQuinta, Brooklynn was her prize,” he said. “That little girl meant the world.”

In his efforts to help Brooklynn heal, father and daughter moved out of their home in northwest Las Vegas and into an apartment. Dwayne said he knew his little girl would feel an emptiness in their home forever when he saw her — just a week after LaQuinta’s death — walking around the house, opening doors and looking for her mom.

Now, she’s like her mother, Dwayne said. Brooklynn bears LaQuinta’s resemblance. She likes to cook and care for others.

“We call her our Brooklyn Bridge,” he said, pointing to a photograph of the New York City attraction that hangs on the Murrays’ living room wall.

For the improvement of health care

In the first year after LaQuinta’s death, Dwayne grieved alone. He cried as he drove. He’d visit his wife’s grave and sob.

But as the one-year anniversary approached, questions surrounding the suddenness of her death bubbled up inside, he said.

“I just knew that it didn’t feel right,” he said. “I wanted to find the answers.”

Arora declined to comment on Tuesday. Attorneys representing Arora and Nevada Hospital Group did not immediately respond to requests for comment.

According to the Nevada State Board of Medical Examiners’ website, Arora still holds a medical license in the state.

Last week, after a legal battle that lasted nearly five years, District Court jurors said the hospital would have to pay Dwayne and his daughter $43 million in compensatory and punitive damages. According to an expert witness for the plaintiff, LaQuinta was given more than the recommended dosage of a non-steroidal anti-inflammatory medication called Toradol, which ultimately killed her.

The hospital’s lawyer, Mike Prangle, told the Review-Journal on Friday that an appeal was likely.

“Even though we feel sorry for Mr. Murray’s loss, we believe the nurses fully complied with the standard of care,” Prangle said.

Dwayne said while the doctor and nurses who cared for his wife share responsibility for her death, the hospital policies enabled over-administration of the drug.

“The system is flawed,” he said. “That in itself is something the health-care system has to look at and say, ‘This created a death, and that didn’t have to happen. What do we have to do differently so we can give better care in the city of Las Vegas?’”