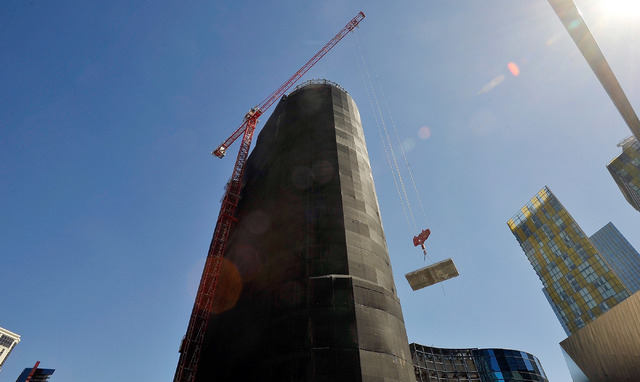 A tower crane lowers a concrete slab as the demolition continues of the unfinished Harmon Hotel tower on Monday, Sept. 22, 2014, in Las Vegas. The planned 47-story tower, part of MGM Resort International's $8.5 billion, 67-acre CityCenter development, was deemed structurally unsound after defects were found in 2008 during construction. The tower will take about a year and $11.5 million to deconstruct. (David Becker/Las Vegas Review-Journal) 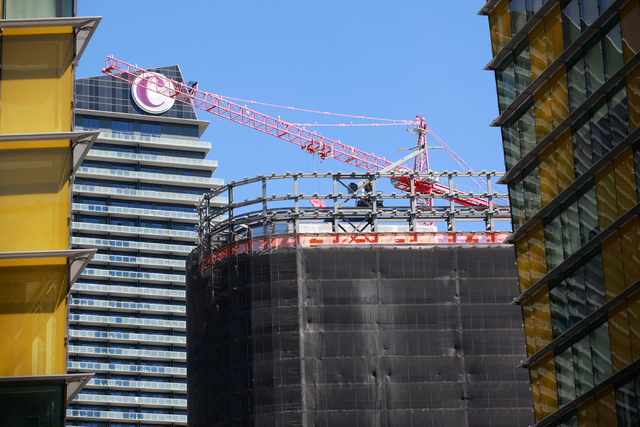 Construction crews work on demolishing the unfinished Harmon Hotel at CityCenter in Las Vegas on Monday, Sept. 22, 2014. The building is being taken down because it was found to be unsafe by officials. The total cost of the demolition, which involves taking the building down piece by piece, is expected to be $11.5 million. (Chase Stevens/Las Vegas Review-Journal) 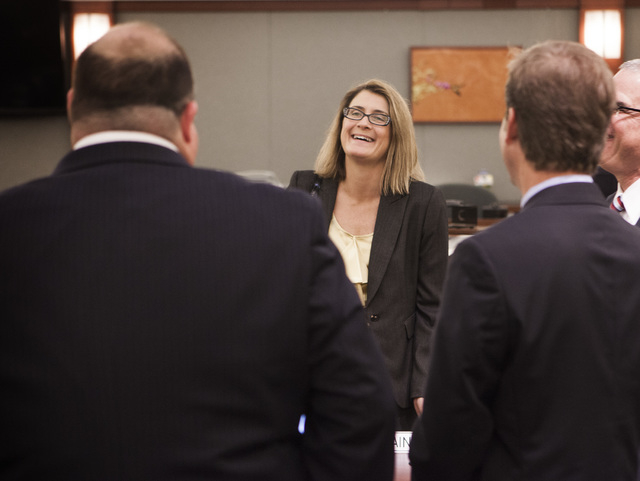 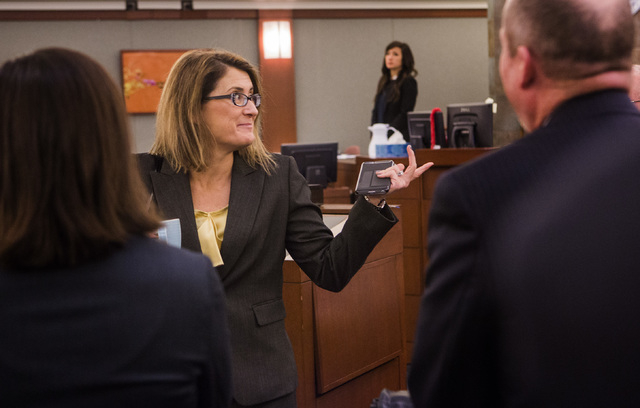 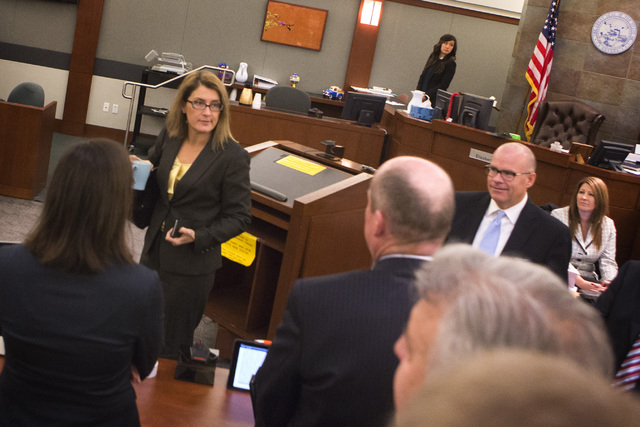 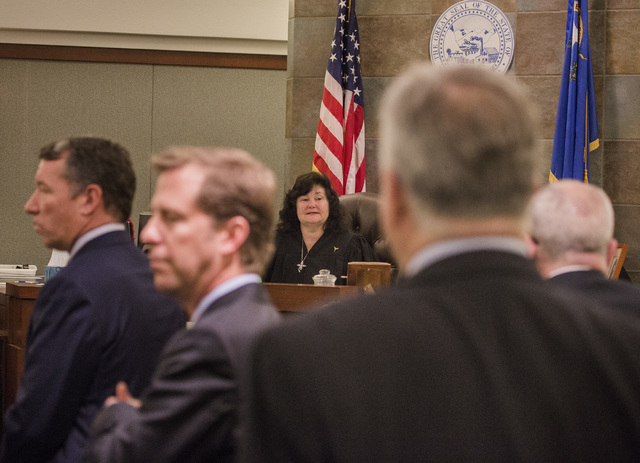 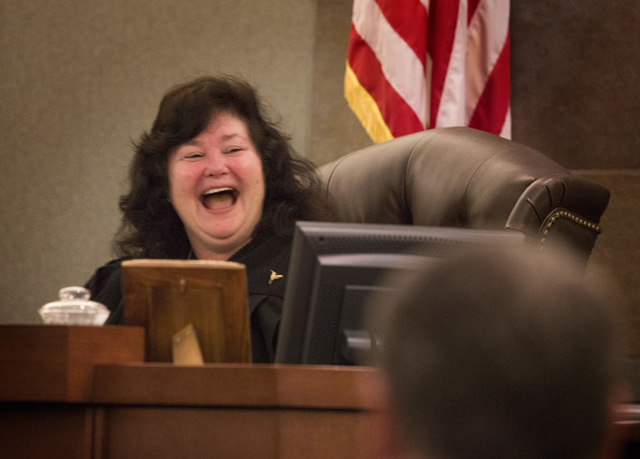 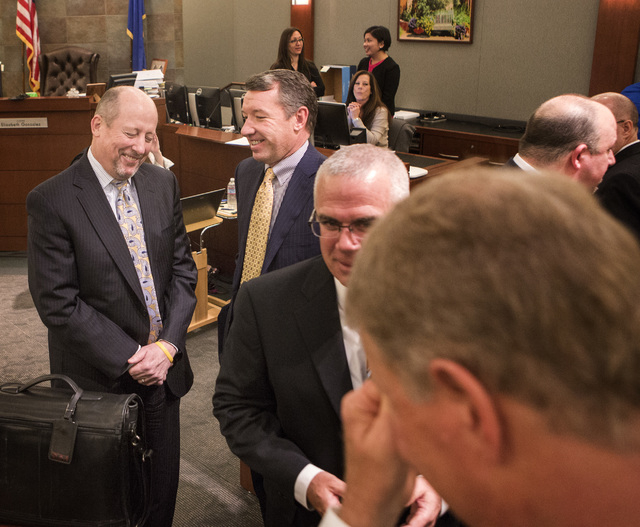 The announcement came the day lawyers were to present opening statements at the trial, which was expected to last more than a year.

District Judge Elizabeth Gonzalez, who has been presiding over the case, praised Chief District Judge Jennifer Togliatti for helping the parties reach a resolution after 15 months of settlement talks.

“Judge Togliatti is a miracle worker,” Gonzalez proclaimed before leaving her courtroom, which had been remodeled to accommodate new technology and the large number of lawyers involved in the case.

The trial began with jury selection seven weeks ago. The case involved more than $400 million in damage claims, but the terms of the settlement are confidential.

However, shortly after the settlement was announced, MGM Resorts filed a notice with the Securities and Exchange Commission saying the company would pay a total of $173 million to resolve the lawsuit, with $20 million going to CityCenter and $153 million to Perini.

Of that total, $72 million was in escrow from CityCenter condo sales. The company will pay out $101 million.

Other numbers in the case were equally staggering. For example, 6,000 potential jurors were informed of the proceedings before the pool was whittled down to about 600 people, who then filled out questionnaires.

“After two marathon sessions, we were able to get over all of the hurdles that we faced,” Ferrario said.

Gonzalez then excused the jury.

“Without you, this case wouldn’t have resolved,” she told the panel.

The case stemmed from the construction of CityCenter, MGM Resorts International’s 67-acre development on the southwest corner of the Strip and West Harmon Avenue.

The Harmon Hotel is the only portion of the $9 billion project that was never completed. Work stopped after construction defects were found in 2008.

A structural engineer hired by MGM Resorts determined the building was unsafe and could topple if a 7.7-magnitude earthquake hit Las Vegas. Construction on the planned 47-story tower was stopped at 26 floors.

According to a synopsis of the case provided to potential jurors, Perini Building Co. and MGM entered into an agreement for construction of CityCenter in 2005. Perini then entered into agreements with hundreds of subcontractors to complete the project.

Both Ferrario and Perini lawyer George Ogilvie III declined to comment on the settlement.

“MGM Resorts International, along with CityCenter Holdings, LLC, has reached a confidential settlement of all disputed claims with Perini Building Company and the remaining subcontractors in the CityCenter Master Construction Litigation pending in Clark County District Court. The settlement resolves any and all claims between the parties.

“CityCenter thanks Chief Judge Jennifer Togliatti for her efforts in assisting the parties to reach a global settlement. CityCenter also wishes to thank trial Judge Elizabeth Gonzalez and the jurors for their willingness to serve.”

Approximately $20 million will be a “contribution” from MGM Resorts.

The company said the condominium proceeds became available to fund construction lien claims after the Perini lawsuit was settled.

Demolition of the Harmon Hotel is underway and should be completed by summer.

Togliatti was in the courtroom when the settlement was announced.

In a later interview, the judge said she got involved in the case after Gonzalez ordered a settlement conference.

Because the case was “incredibly complicated — both factually and legally,” Togliatti said, the conference involved a series of meetings, phone calls and emails over 15 months.

“In that way, it was different than your average settlement conference,” the judge said.

The negotiations culminated on Dec. 8 and 9.

“I needed 14 rooms on the last two days,” Togliatti said.

She then held a sealed hearing on Friday.

“What it really took was a willingness to act in good faith and compromise, because I think they were all confident in their legal positions,” the judge said.

Parties involved in the settlement include Century Steel Inc., whose subcontract was assigned to Pacific Coast Steel during construction, and CECO Concrete Construction.

Only a small portion of the case involving Show Canada Industries Inc. remains unresolved. That matter will be heard by Gonzalez during a bench trial.

Togliatti said she was impressed by the way Gonzalez handled the case during the months leading up to the settlement.

She also said the jury’s presence served as a constant reminder to the parties of the risks involved in taking a case to trial.

“In general terms, I think participating in your own destiny is always something that’s better for the parties,” the judge said.

Togliatti said she is pleased for the court system, which will reap “incalculable” savings because of the settlement, and for the parties, who now may move on to other business.

The case, which had more than 3 million digitally stored pieces of evidence, also placed a burden on the court’s information technology department.

“The first people to thank me on the way out was the IT staff,” Togliatti said.