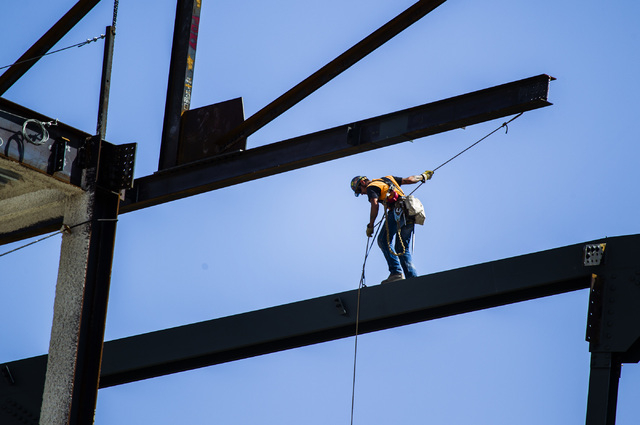 Construction, consumer spending and tourism are driving this economy.

Sound familiar? It should: Those sectors formed the foundation of Nevada’s economy in 2007 — just before it skidded into its nation-leading downturn.

On Friday, a state agency said the building, retail and resort industries will again lead Nevada’s job growth, pushing the state back to its pre-recession job levels in a year or so.

But industry observers promise it will be different this time — today’s jobs base is already more diverse than it was a decade ago, and new industries will underpin some future gains.

“Essentially every private-sector industry but mining and, to some extent, financial services, is showing noticeable growth,” said Bill Anderson, chief economist of the state Employment, Training and Rehabilitation Department. “So the kind of job growth we’re seeing is much more sustainable than what we were seeing before, when so much of our growth came from two sectors.”

To understand just how Nevada will expand, start with Friday’s report.

The employment department’s 2017 estimates are at the higher end of the 45,000- to 60,000-job range that economists with UNLV’s Center for Business and Economic Research foresee.

Still, the center forecasts “strong acceleration in growth because all of the indicators that drive the economy here just look really good,” director Steve Brown said.

Plus, the billions of dollars in planned development in Nevada in coming years point to ongoing economic growth, said Brian Gordon, a principal in local research firm Applied Analysis.

When it recovers to 2007 levels, though, the jobs base will look different.

Sure, construction is set to gain the most percentagewise, with major projects such as Tesla’s $5 billion Giga­factory outside Reno, plus Strip projects such as Genting Berhad’s $4 billion Resorts World Las Vegas, the $350 million MGM-AEG arena, and the Las Vegas Convention and Visitors Authority’s $2.3 billion Las Vegas Global Business District.

Even then, the sector will have 53,000 fewer workers than pre-bust. That means growth is coming from somewhere else.

“The mix of industries has continued to shift. We’re a decade removed from the height of the economic boom, and the economy and the workforce have been forced to retool themselves,” Gordon said.

In fact, 18 of 20 big industries will add jobs through 2017, Anderson said. Especially notable will be gains in manufacturing, sourced largely to Tesla’s plant. Tesla officials say the factory will eventually employ 6,500. Anderson’s analysis said Nevada’s manufacturing sector will grow by 5,100 jobs through 2017.

Health care will bring on 13,000 positions as the population grows and ages. The retail and leisure and hospitality sectors will grow by 15,400 and 41,200 jobs, respectively.

The forecast is just that: a forecast. Outlooks could change if conditions change.

Possible negative factors include weakening economies in Europe and China, combined with a stronger dollar, both of which could hurt visitor volumes and spending, Brown said.

Uncertainty at home could also affect the economy.

“If people are uncertain about their economic future, they’re going to become more cautious,” Anderson said.

Nor are there any guarantees that the Tesla factory, which is a big part of forecasts, will perform as expected. The company has yet to produce an affordable, mass-market electric car. Its current models go for at least $70,000, and it said in April that it sold 10,000 cars worldwide in the first quarter — a fraction of the global total of 6.13 million sales, according to the German Association of the Automotive Industry.

Tesla, which is to receive $1.3 billion in tax breaks from the state, said this week it would also develop batteries for home storage of renewable energy. Brown called the submarket “speculative.”

Labor unions said in February that Tesla had stopped work on its 10 million-square-foot factory. Company officials denied the reports and said construction was ahead of schedule.

Some equities firms have gotten nervous enough about the company, which lost nearly $300 million in 2014, that they’ve cut their positions in its stock: Susquehanna Financial Group of Boston sold more than half of its Tesla shares in January.