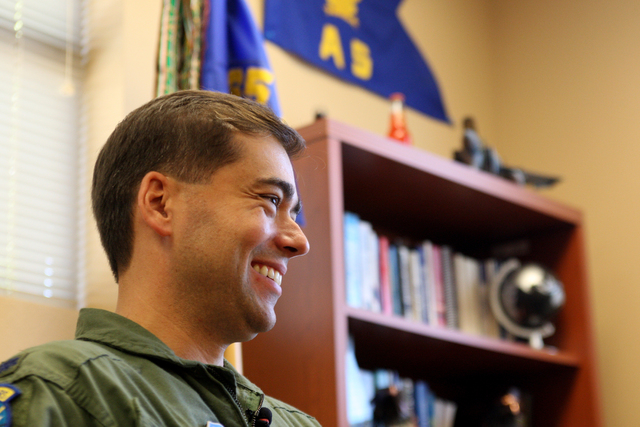 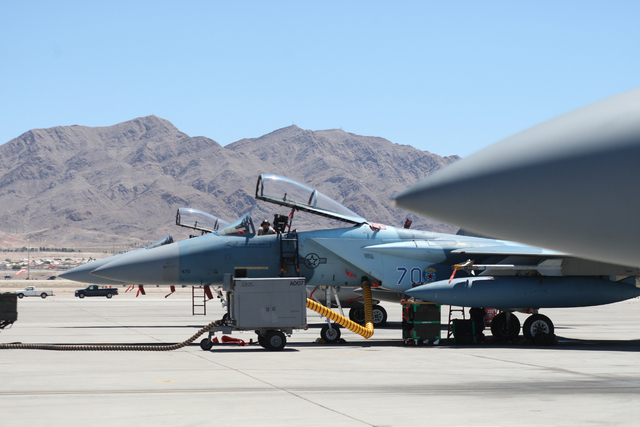 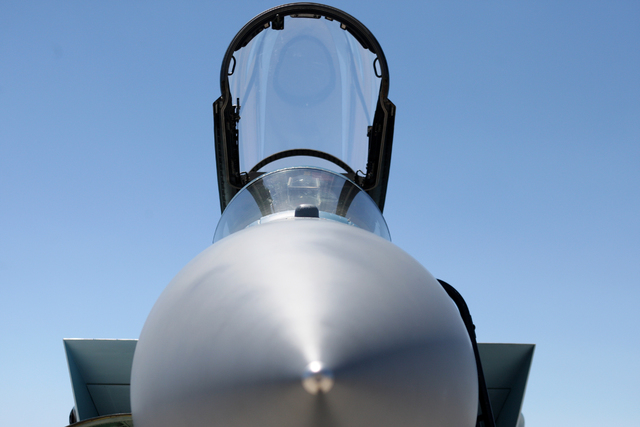 An F-15 aircraft undergoing routine maintenance at Nellis AFB is part of the 65th Aggressor Squadron which will be deactivated in September 2014. Wednesday, August 7, 2014 (Michael Quine/Las Vegas Review-Journal)

The next time fighter jets take off from Nellis Air Force Base for a Red Flag air combat exercise, there will be fewer would-be “bad guys” to battle.

Up-and-coming pilots who will be flying their first 10 simulated combat missions will face an adversary force that has fewer sparring partners, a sign of the times as the military reduces its planes and personnel and U.S. combat operations wind down in Afghanistan.

That’s the word from Lt. Col. Greg “Papa” Wintill, commander of the 65th Aggressor Squadron — one of two squadrons at Nellis that play would-be enemies for Red Flag training. He confirmed last week that his squadron of 19 camouflage-painted F-15 Eagles will be deactivated in a ceremony on Sept. 26 in order to meet Pentagon budget constraints before the new fiscal year begins Oct. 1.

“We’re having to deal the best we can with the money we have,” Wintill, 40, told the Review-Journal in an interview Wednesday at the squadron’s Lt. Col. Thomas A. Bouley Building. The building is named for a past commander of the 65th who was killed July 30, 2008, when his two-seat, F-15D jet crashed during training at the Nellis range complex, now known as the Nevada Test and Training Range.

“This deactivation, while we as a squadron don’t necessarily want it to happen, it’s what the Air Force needs to have happen for the financial constraints that were being put in,” Wintill said.

It’s unclear of the exact cost savings, but the squadron’s annual budget that will be eliminated is about $35 million, including funding for a staff of 150 airmen who maintain the jets. Some have already left the unit.

Wintill said six F-15s plus a spare jet will be transferred temporarily to the 64th Aggressor Squadron at Nellis, which consists primarily of newer F-16 camo-painted Fighting Falcon jets. There will be no trimming of the 64th’s 20 F-16s to offset the addition of F-15s, a base spokesman said.

Those six F-15s and nine pilots will fly Red Flag training from September until the end of March, when they will be transferred to other units or discontinued as operational aircraft. About 90 maintainers from the 65th will make the six-month transfer to the 64th.

A dozen of the the 65th’s F-15C jets will be transferred to the Air National Guard. The six that remain operational through March will be sent to the Air Force boneyard near Tucson, Ariz., after they complete their Red Flag missions, which are typically held three times a year.

“I’d love to keep my airplanes here, but that is not for me to decide,” Wintill said. “I love the F-15, but she’s getting old. We fly 1978 models, so they’re not the newest airplanes on the block.”

The sequester budget ax fell heavy on Nellis last year as the Air Force went into a “tiered readiness” mode for the first time since that branch of the armed forces was established in 1947. The unprecedented cuts resulted in cancellation of a Red Flag exercise and the next graduate-level Weapons School for pilots. Last year’s Aviation Nation airshow at Nellis was also canceled.

Next month’s deactivation of the 65th Aggressor Squadron is akin to the other shoe dropping.

“This is more an effect of the budget cuts that already hit before,” Wintill said. “We have to balance the books.”

Although still in development, the stealthy F-35 joint strike fighter jets and air-superiority F-22 Raptors, which flew in July’s Red Flag, stand to replace the aging fleets of F-15s, F-16s and A-10s.

“It’s really hard to say what’s going to be in the future. No one knows,” he said.

“We do believe we’ll have a smaller Air Force in the future, especially as the effects of sequestration take hold. So we’ll see even more numbers being drawn down whether it’s on the personnel side or aircraft side, whether that’s here at Nellis or somewhere else. I don’t know,” Wintill said. “But we do see a smaller Air Force. We do believe we’ll be capable, smaller, though.”

Wintill said the challenge will be a balancing act between “being combat ready and modernizing the fleet, as well.”

“I think our leadership at ACC (Air Combat Command) is working diligently to make sure we balance that effectively and remain combat ready while we do so,” he said.

“As you look at the road map for the United States Air Force, the F-35 is the centerpiece of it, not just for the Air Force but the DOD (Department of Defense),” he said. “The F-35 is still in development, so it still has issues. But they’re going to get it right, and that’s going to be the plane for us in the future.

“It brings a lot of capabilities, and I will tell you as an aggressor pilot, stealth works. When we go up and fight against a newer airplane that has stealth, it’s a much different problem than when I fly against a fourth-generation airplane. So stealth is a wonderful thing when it comes to survival of our forces,” Wintill said.

The commander emphasized the international importance of having an adversaries tactics group for U.S. and allied pilots to train against.

“We bring a unique skill set,” he said. “We can integrate a bunch of the functions that’s unique not only to Nellis but unique to the world. That’s why our foreign allies come here to get that training.”

From the paint job on its planes to the pilots’ shoulder patches, the 65th Aggressor Squadron has simulated the enemy since it was reactivated at Nellis in 2006. Covers on the cockpit seat and intakes bore a yellow, hammer-and-sickle insignia inside the outline of a red star — the symbol of the United States’ enemy in the Cold War, the Soviet Union.

In marking the reactivation in January 2006 of the legendary 65th, a unit with roots steeped in success during World War II, the Air Force’s vice chief of staff then, Gen. John D.W. Corley, said today’s fighter pilots need to maintain the edge they have through training against any potential adversary regardless of the United States’ advantage in technology.

“We can’t rely on superior equipment always winning,” he said. “Training will make sure we know the enemy.”

Known first as the 65th Pursuit Squadron in 1940 and two years later as the 65th Fighter Squadron, the squadron flying P-40s and P-47s racked up three distinguished unit citations for actions over North Africa, Sicily and Italy during World War II.

The 65th Aggressor Squadron previously served at Nellis from 1983 through 1989. The squadron flew during a brief stint at Nellis in 1969-70 when it was known as the 65th Fighter Weapons Squadron.

The 64th squadron was the first aggressor squadron to be reactivated at Nellis, in October 2003. Its roots go back to 1941, when it began as the 64th Pursuit Squadron in World War II.

But the advent of the squadron’s aggressor role came in 1972. That marked the beginning of a concerted Air Force effort to reverse the trend of almost 1-to-1 kill ratios at a low point in the Vietnam War. In the Korean War, U.S. pilots took out 10 enemy planes for every U.S. plane that was shot down.

For 18 years, the aggressors chalked up more than 250,000 sorties in more than 1,000 training deployments at U.S. installations in the United States and overseas.

Then, faced with defense budget cuts in 1990, the 64th squadron was deactivated and reformed as an adversary division for Red Flag training exercises at Nellis.

“And the tougher the sparring partner your are … the tougher that practice team is, the better the real team is when they go out and fight in combat. It’s an honor to be able to go out and train and get our forces ready for combat because we may be the last guys they see before they go out the door and fight,” he said. 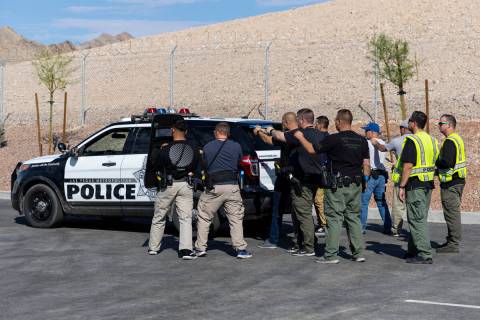