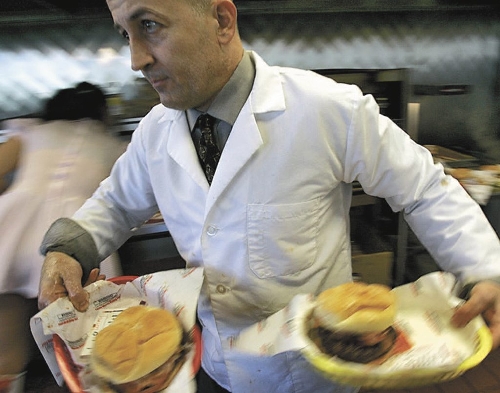 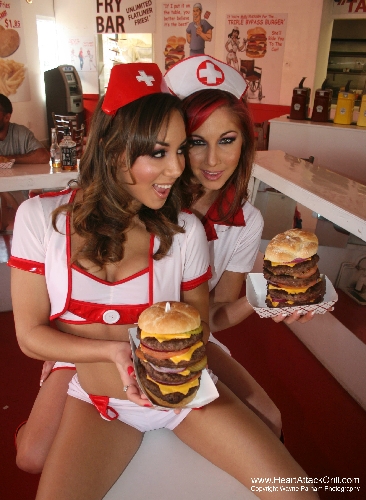 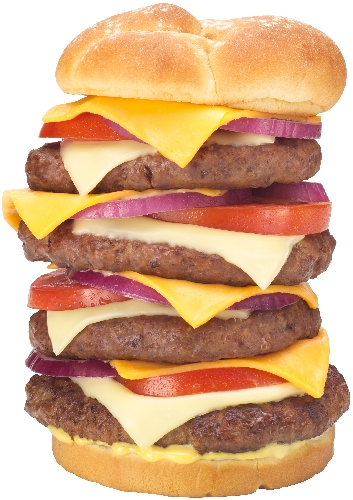 With greasy bar food, belly-busting buffets and deep-fried Twinkies, Las Vegas has plenty of options if you’re looking for food that’s bad for you.

But how many of them come with a disclaimer?

"The Heart Attack Grill diet is not for everyone," states the warning from the Heart Attack Grill, which is scheduled to open in downtown Las Vegas by the end of the year. "Side effects may include sudden weight gain, repeated increase in wardrobe size, back pain, male breast growth, loss of sexual partners, lung cancer, liver sclerosis, stroke and an inability to see your penis.

"In some cases, mild death may occur."

The over-the-top bad-for-you burger joint — its signature offering, the Quadruple Bypass Burger, is a behemoth of beef, cheese and lard with an estimated 8,000 calories — has been around since 2005, first in the Phoenix area and now in Dallas, where a location opened in May.

Owner Jon Basso has been courting controversy and enraging the health conscious and tasteful the entire time, something that’s likely to continue even as he moves to a city that thrives on gluttony and excess.

After all, he’s got something to offend just about everybody. His food is monstrously sized and audaciously fatty and unhealthy. His waitresses parade around in skimpy "nurse" costumes, which drew the ire of nurses’ groups in Arizona. Basso dresses like a doctor, one who has a diet with guaranteed results — weight gain.

He advertises unfiltered cigarettes, and candy cigarettes for the kids. The eatery’s motto is "Taste Worth Dying For."

For the morbidly obese, he’s got a special deal: If you weigh more than 350 pounds, you eat free.

Another person who got free food was the eatery’s former "spokesmodel," Blair River, who tipped the scales at 570 pounds and died earlier this year at the age of 29. Pneumonia was the official cause, but Basso said obesity was a factor, too.

When you ask Basso about all this, he insists he’s the good guy.

"Burgers and fries are the No. 1 and No. 2 most consumed foods in the world," Basso said. "You want to compete selling the most ubiquitous commodity out there, you’ve got to have an edge. I consciously decided that my edge would be total, bleak and constant truth.

"We’re the only restaurant in America telling you that this is bad for you. It’s going to kill you. Stay away. And the more I tell people to stay away, the more they love it and just want to pile through the doors."

BAD, BUT SO GOOD?

He expects to have the doors open in October for his new location, which will be at Neonopolis in the space formerly occupied by Jillian’s and Las Vegas Rocks Cafe. A 10-year lease has been signed.

When it does open, the restaurant will join several other new tenants in the struggling three-story mall, at the corner of Las Vegas Boulevard and Fremont Street. The grill has perhaps the most prominent spot in the mall, facing Las Vegas Boulevard, giving top billing to an endeavor that’s either the most offensive burger joint ever or a very clever dig at America’s love for unhealthy eating.

"It does sound like something that’s too bad to be true," local food critic John Curtas said. "It’s almost Americana at its worst. But something about it makes me think it’s perfect for Vegas."

This is the town, after all, where you can buy a 24-hour buffet pass good at multiple hotels. The NASCAR Cafe offered a 6-pound, 2-foot-long burrito. Some bars will sell you beer by the gallon. The Heart Attack Grill is just another way to approach that market.

"It’s going to get that frat-boy redneck crowd that seems to have a certain kind of symbiosis with this kind of thing," Curtas said.

"I can act like a snob, but the other hand I go, ‘Bravo!’ If it brings customers downtown, if it gets us more publicity and causes a stir, it’s all good on some level."

But not on every level. One of Las Vegas’ priorities is business development and recruitment, especially downtown, but the city also tries to promote health and wellness, one of many areas in which Southern Nevada lags behind other states.

Mayor Carolyn Goodman said Las Vegas was built on the "best and biggest experiences" available, and that like everything else, people should go big in moderation.

"There is nothing wrong with indulging once in a while, as long as you don’t go overboard," she said. "I’m excited that a new eatery will be coming to Neonopolis, and I wish them the best of luck."

Basso, who calls himself "Dr. Jon" and "chief surgeon" of his restaurant, actually has a background in diet and fitness. He previously owned gyms, diet centers and personal training studios, he said, and he insists — with a straight face — that his restaurant is an extension of those nutrition-conscious days and that he helps people learn to eat better.

That would mean, however, that his customers wouldn’t come back.

And remember that policy of letting people weighing more than 350 pounds eat free?

"That’s probably the best thing that we can do for them," Basso said. "We’re singling them out. … That’s the X factor they need to get themselves on a diet of some sort.

Is anyone buying this?

"I think that’s a crock," said Dan Dunlop, a marketing expert who heads a North Carolina ad agency and has followed the Heart Attack Grill’s marketing efforts over the years.

"I don’t think they need to apologize for what they do, but to represent themselves as a standard-bearer for healthy living? That’s bull."

All restaurants thrive on indulgence, Dunlop said — they’re just less straightforward about how they sell it.

"That is no different from P.F. Chang’s, The Cheesecake Factory, Krispy Kreme donuts," he said. "Those are rich brands that America has embraced."

Basso is just more blatant: "They don’t hide their indulgence. They go from indulgence to gluttony," Dunlop said. And that connects with a part of the public that’s tired of being lectured to about their diets, he said.

If that’s the case, then there’s one nugget of information Basso might want to quash: His fries, which are fried in lard, aren’t as unhealthy as they could be.

"They act like that’s a bad thing," Curtas noted. "But frying things in pure lard, if it’s done correctly, is healthier than frying them in trans-fat oil.

Neonopolis, of course, has not been kind to many of the businesses that have tried to succeed there, and the mall sat mostly empty for years until the recent flurry of activity. Heart Attack Grill has been around for six years, but they’ve moved a lot and are no longer open in the Phoenix area.

Don’t count them out yet, Curtas said.

"I didn’t think Hash House A Go-Go had staying power," he said. "They’re kind of a one-trick pony too — giant plates of food. That’s it.

"It goes over with a certain segment of the American population that really just wants caloric, big, over-the-top kind of food."