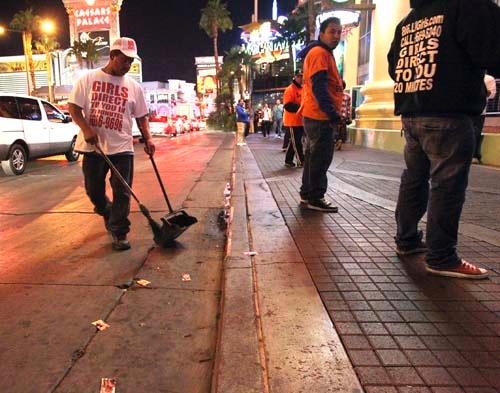 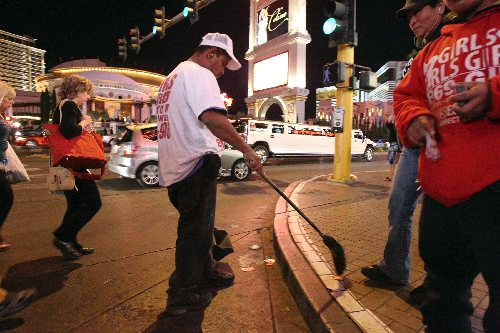 After Clark County spent more than a decade fighting — and losing — multiple legal battles against the handbillers who pass out risque ads for strippers and escorts on the Strip, Sheriff Doug Gillespie is trying a different tack.

Instead of litigation, he’s using co­operation to address complaints about aggressive handbillers, pedestrian traffic congestion and litter that have plagued the industry for years.

For several months, Las Vegas police have met with owners of the advertising companies working in the tourist corridor to discuss ways to fix those issues voluntarily. In exchange, police promised to better train officers on what the hand­billers are allowed to do. Police will also tell hotel security chiefs about the voluntary agreements.

So far, a handful of companies have bought in. Their cooperation covers about 70 percent of the roughly 200 handbillers who line Las Vegas Boulevard each day.

Vincent Bartello, owner of the largest company, Hillsboro Entertainment, said he welcomed the sheriff’s approach to communication after years of contention.

“People don’t have to like what we do, but they can talk to us about how we do it,” he said. “We want to be good neighbors.”

The county’s battle against the hand­billers stretches back to the 1990s when commissioners passed an ordinance aimed at banning the distribution of commercial pamphlets and other material.

With the help of the American Civil Liberties Union of Nevada, Bartello and another ad company owner sued. Their case made it to the 9th U.S. Circuit Court of Appeals in San Francisco, which questioned the ordinance’s constitutionality. Commissioners tweaked the ordinance, but that was blocked by U.S. District Judge Lloyd George, who in 2008 declared it unconstitutional.

“All it’s accomplished is to waste a lot of time, energy and money, and it’s not really gotten anywhere,” the ACLU’s Allen Lichtenstein said of the decade-long legal fight.

Despite the court rulings that the Strip sidewalks are public thoroughfares where free speech of all kinds is protected by the First Amendment, handbillers continued to be harassed by both police and hotel security guards, said Bartello, who’s been in business 17 years.

And police continued getting complaints about overly aggressive handbillers shoving pamphlets at families, crowding crosswalks and leaving the sidewalks covered in litter.

Gillespie said he hadn’t considered reaching out to the handbilling companies until a regular meeting with Steve Wynn earlier this year. When the topic came up, Wynn asked the sheriff whether he had considered it. Gillespie admitted that he hadn’t.

But he took that idea and reached out to Lichtenstein to serve as an inter­mediary. He set up a meeting between police and the owners of the roughly half-dozen companies that work on the Strip.

At the first meeting in early summer, the sheriff made his case.

“I told them I wanted to work with them,” Gillespie said. “Maybe we could find some common ground.”

Capt. Todd Fasulo, whose Convention Center Area Command includes the Strip, is the point man for the police effort.

He emphasizes the importance of working together to create an environment where tourists don’t leave with a bad taste in their mouths, which could hurt the economy for everyone.

Not every company has bought in, but four have regularly attended the monthly meetings as issues from both sides have been discussed and a voluntary set of rules has been agreed to.

Key rules of conduct include staying 20 feet away from crosswalks, not giving any material to people who look younger than 25, refraining from snapping the cards or pamphlets, whistling or making any other noise, picking up litter and handing out material to tourists’ torsos instead of their faces.

“If they want it, they take it,” Fasulo said. “If not, they shouldn’t have someone shoving it in their face.”

On Wednesday evening, most of the handbillers on a stretch of sidewalk outside Harrah’s and Flamingo were abiding by the new rules. Most remained clear of the crosswalks. Most made no noise. But a few handbillers, likely from companies that haven’t bought in, were doing those things.

One worker from Hillsboro walked up and down the sidewalk with a broom and dustpan, brushing up any bit of litter whether it was a pamphlet with a half-naked woman or a cigarette butt.

Getting every company on board is a concern for police and the participating companies alike.

“We are definitely better than we were six months ago, but we are not where we need to be until we get 100 percent participation,” Fasulo said.

Bartello and Lichtenstein said the county and hotels need to be involved too.

County Commissioner Steve Sisolak supported Gillespie’s endeavor, which helps address one of the concerns he has about the Strip.

He backed a committee that is looking at dealing with the explosion in street vendors, performers and handbillers on Las Vegas Boulevard. The police effort is a step in the right direction, Sisolak said.

“Those issues are getting bigger and bigger. We have to do something, and that’s a good place to start.”