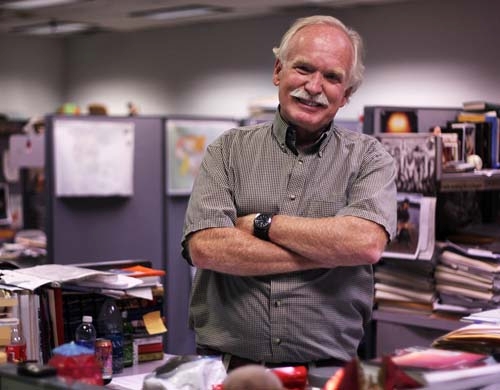 Slow and steady wins the race.

Ed Vogel, a veteran Las Vegas Review-Journal reporter who got his start covering sports for a $1.50 per story in his native Michigan, was inducted into the Nevada Newspaper Hall of Fame on Saturday night by the Nevada Press Association.

The honor, bestowed upon Vogel inside the ballroom at The D in downtown Las Vegas, caps a long and storied career crowned with his steadfast coverage of the Nevada Legislature since 1985. Vogel, like some sort of Lou Gehrig of newspapers, has managed to chronicle 17 regular sessions and 12 special sessions.

But before rolling up his sleeves and refining the political beat at the Review-Journal, Vogel started out like many newsroom rookies – covering night cops and then military affairs before he became a roving reporter in Nevada’s rural counties.

There, he’d find unusual stories and bring them home to thousands of readers – like the one about a lone sheepherder who worked north of Cedar City, Utah, in the middle of nowhere, above 10,000 feet.

"I remember it was getting dark and cold and I was getting a little worried because I couldn’t find him, but then he ended up finding me, and I was relieved," said Vogel, 64.

It ended up being a great story because the sheepherder, in Vogel’s words, "was at peace with himself."

"I remember he had the Book of Mormon on cassette , and he’d just listen to it over and over," Vogel said.

Vogel couples a knack for great feature writing with an ability to simplify complex issues – like the controversy surrounding the handling of nuclear waste at Yucca Mountain.

In short, he became an expert on the subject.

And when there was breaking news, Vogel was more often than not on the spot, whether it was reporting on the latest developments in the murder of state Controller Kathy Augustine or recording for posterity the divisive, rough-and-tumble politics that is Carson City.

Considered something of an elder statesman in an always evolving news­paper industry, Vogel has only gotten better – and more fierce – through the years.

As Review-Journal Editor Michael Hengel noted at Saturday’s ceremony, "Ed gets as giddy about a scoop as a kid out of J-school."

"Ed is a workhorse," Hengel said. "Even after more than four decades as a journalist, including 35 years at the R-J, Ed somehow manages to outhustle most of the reporters on our own staff, to say nothing of how he handles the competition. His commitment to getting the job done right is unflinching; he doesn’t give up, he does not give in.

"Every day, he displays great heart."

Vogel marries a wealth of institutional knowledge with old-school fundamentals – getting out and talking to people.

He perfected his style at an early age when he interviewed Harry Alexander, a man who witnessed the first time that the railroad here started selling off some of its parcels during a May 15, 1905, auction – an historical sale that, in effect, led to the creation of Las Vegas.

And if Vogel wasn’t chasing down sheepherders or developing great sources off the streets and in the Capitol’s corridors, he was bearing witness to all sorts of unexplained phenomena , including the mysterious incisions made in the under­belly of cattle in New Mexico – long thought to be the work of extraterrestrial aliens.

"I remember seeing those," he said as he prepared to receive his award. "That was back when I was working in Belen. That was years ago."

But there is one thing that stands head and shoulders above his storied career. That’s his little girl, Annabelle, 10, who took her first plane trip to see her father receive the award to thundering applause.

"She’s the greatest," Vogel said. "I wanted her to be here for this. That she was here was more important to me than anything else."

Also elected into the Hall of Fame was columnist Guy Richardson, who died in 2003 at the age of 65. He wrote for the Reno Gazette-Journal.