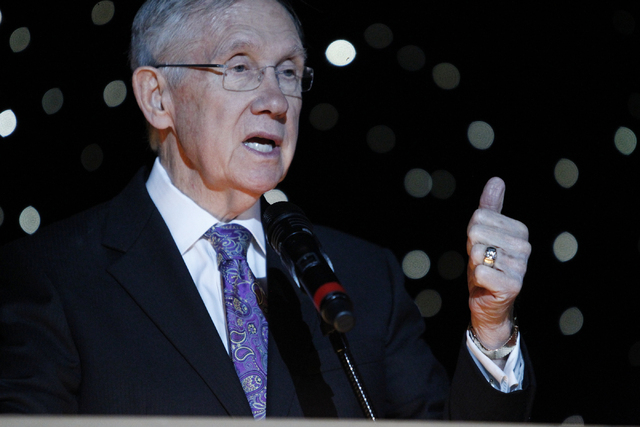 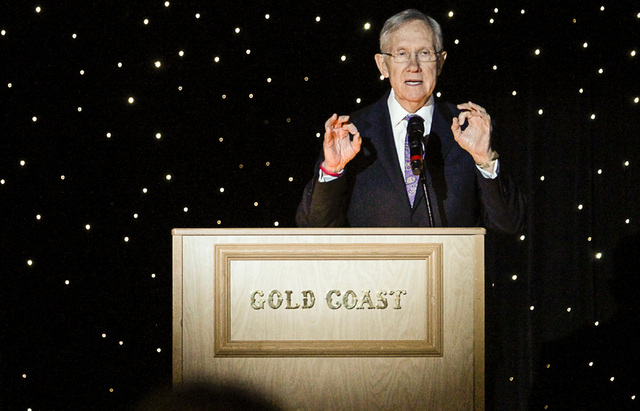 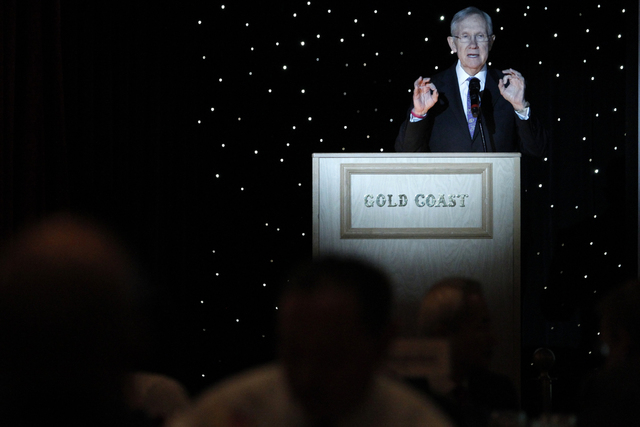 Harry Reid is no prude.

The U.S. senator likes to tell the story of growing up in dusty Searchlight where prostitutes were as common as Joshua trees.

His mother took in laundry from the brothels, he said.

Reid, 74, told the story on Thursday during the monthly luncheon of the Asian Chamber of Commerce at the Gold Coast off the Strip.

The Senate majority leader didn’t bring up the topic. Instead, he was asked by a member of the audience what ever happened to his call for the Nevada Legislature to outlaw prostitution in the state. Now, it’s legal in eight rural counties and not in those that are big population centers such as Clark County and Washoe County.

In 2011, Reid said in a speech to the Legislature it’s time for Nevadans to have “an adult conversation” about ending prostitution because legal brothels hurt the state’s reputation.

He argued that businesses seeking to move to the Silver State are sometimes reluctant because of its legal prostitution (not to mention gambling and a poor education system.)

“I believe it has hindered economic development in the state,” Reid told the chamber.

So why does he think lawmakers didn’t act on his advice? Reid didn’t mince words.

“The Legislature, they’re all a bunch of cowards,” Reid said. “They were afraid to do anything about it.”

At the time, most lawmakers said they were dealing with a major budget crisis and didn’t have time to spend on debating whether to outlaw prostitution. Others said it’s a local issue for each of Nevada’s 17 counties to determine — a position Republican Gov. Brian Sandoval took, saying, “It’s up to the counties to decide if they want it or not.”

Hillary Clinton has taken a lot of flak for demanding a $225,000 fee to speak Oct. 13 at the UNLV Foundation’s annual fundraising dinner. She did discount her initial $300,000 request, which included travel by private jet, a presidential suite, rooms, meals and even cellphone charges for several aides who travel with her.

Student leaders at UNLV have asked Clinton, who’s depositing her fee in her family’s charitable Bill, Hillary and Chelsea Clinton Foundation, to instead return all or part of the money to UNLV to support students struggling with rising tuition.

Meanwhile, Clinton critics have noted the potential Democratic presidential candidate in 2016 is acting a little too high and mighty to relate to most Americans who are living a more mundane middle-class life and having trouble paying bills.

So how do Nevadans feel about Clinton’s six-figure fee?

Of course, there’s a poll to answer that question.

Some 55 percent believe the fee is “unfair” to UNLV students while 29 percent said it’s “fair,” according to the statewide survey of 405 likely Nevada voters. It was taken July 14-15 with a margin of error of plus or minus 4.9 percentage points.

The question juxtaposed Clinton’s fee with rising student tuition, which might have influenced the answers.

It read, “As you may have heard, UNLV has agreed to pay Hillary Clinton $225,000 to speak at a school foundation fundraiser. This comes even as tuition at the university has gone up 17 percent. Do you believe the fee for Hillary Clinton to speak at UNLV is fair or unfair to UNLV students?”

It wasn’t all bad news for Clinton, however.

The poll memo concludes, “The recent string of missteps from former Secretary of State Clinton have continued as she further alienates voters with her out-of-touch image management.”