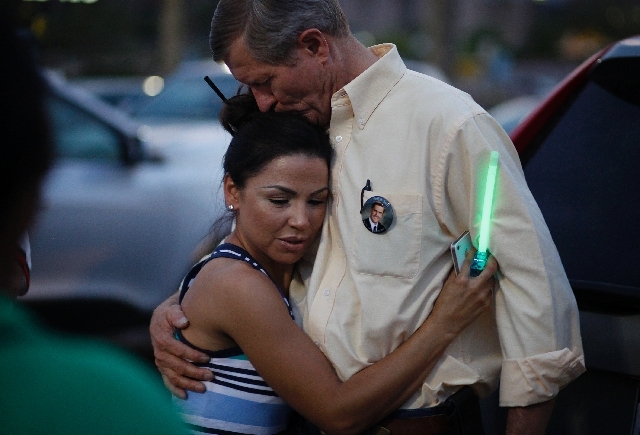 Violet Abreo-Frear, left, hugs Bill Scott at during a vigil for Erik Scott at the Summerlin Costco on Wednesday. Erik Scott, son of Bill Scott, was killed by Las Vegas police three years ago at the Costco. 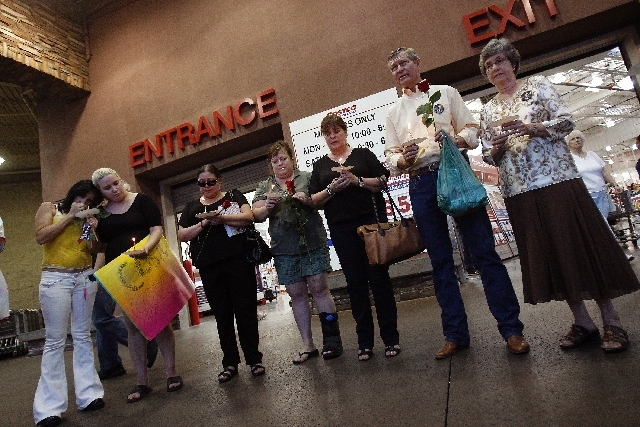 Linda Scott, right, and her husband Bill Scott, second from right, attend a vigil for Erik Scott at the Summerlin Costco in Las Vegas Wednesday. Erik Scott, son of Bill and Linda Scott, was killed by Las Vegas police three years ago at the entrance of the Costco.

On the third anniversary of the shooting of Erik Scott by Las Vegas police officers at a northwest valley Costco, family members are in town to attend a vigil in his memory.

Scott, who was 38 at the time, was shot and killed in 2010 at a Summerlin Costco store.

Police, who had been alerted by a Costco employee that Scott was causing a disturbance and had a gun, said when officers arrived and told Scott to surrender, he raised a gun toward them.

Scott was shot by Metro officers William Mosher, Joshua Stark and Thomas Mendiola as he walked out of the store. The shooting was ruled justified, but helped set off an indepth review of officer-involved shootings.