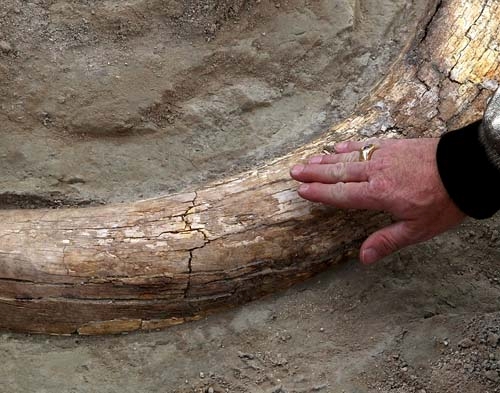 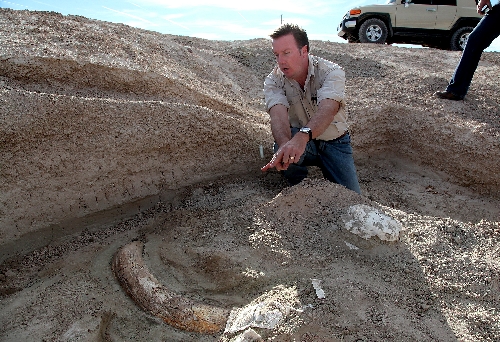 The rich fossil beds of Tule Springs at the northern edge of the valley will get the full rock-star treatment this week , as paleontologists from around the world gather in Las Vegas.

Some 1,500 fossil researchers are here for the annual conference of the Society of Vertebrate Paleontology. The weeklong event features seminars and field trips dedicated to the Upper Las Vegas Wash, where fossils have been found of mammoths, lions, camels and other animals that roamed the area during the last ice age and the ice age before that.

Backers of a plan to turn the area into a national monument hope the convention will shine a spotlight on what one researcher described as the sort of place scientists search for their entire careers.

She said Tule Springs is a big part of the reason the international paleontology conference is being held in Las Vegas for the first time in its 71-year history. Roughly one-third of the conference is dedicated to the scientific bounty entombed along the Upper Las Vegas Wash.

Once paleontologists see the site for what it is, DeStefano hopes they will join the chorus of people who demand it gets protected as soon as possible.

Protectors of Tule Springs, the National Parks Conservation Association and others are pushing for a 23,000-acre national monument that would border North Las Vegas, Floyd Lamb State Park and the Desert National Wildlife Refuge.

The proposed park would take in a sawtooth-shaped swath of land littered with fossils of animals that lived and died between 7,000 and 200,000 years ago.

Back then, the area was wetter, cooler and home to a string of spring-fed watering holes similar to the one that still exists at Corn Creek on the Desert National Wildlife Refuge.

“It’s a world-class fossil site,” said Joshua Bonde, a local paleontologist and doctoral student at University of Nevada, Las Vegas. “You can actually see how ecosystems have transitioned from warm climates to cold climates and back again through several ice ages.”

Paleontologist Ted Fremd came from Oregon to attend the convention, but he already has been to Tule Springs.

Fremd conducted a brief survey of the property in April 2009, about a month before he retired from the National Park Service. He went in not expecting much but came away impressed by the number, diversity and age range of the fossils he saw.

His “cocktail napkin estimate” for the total number of mammal fossils in the Upper Las Vegas Wash is at least 10,000.

And the site is interesting for other reasons. He said a large dig conducted there in the 1960s marked the first time the technique of radiocarbon dating was put to use in the field.

The property’s proximity to Las Vegas also presents a unique opportunity to contrast the region’s arid, urban present with its ice age past.

But the fossils are the real draw.

“I saw bone all over the place,” said Fremd, now a research associate and curator of paleontology at the University of Oregon. “Some of the (nearby) housing developments are probably sitting on some pretty interesting boneyards. Of course, we’ll never find them now.”

That’s exactly why it needs protection right away, DeStefano said.

Already, parts of the site have been permanently damaged by off-road vehicles and illegal dumping. “The longer it goes, the more fossils get driven over and the more is lost,” she said.

Gov. Brian Sandoval and leaders in Las Vegas, North Las Vegas and Clark County have all thrown their support behind the creation of a monument. So has the U.S. Air Force, which wants the area protected as a flyway for helicopters and warplanes from Nellis Air Force Base.

Staff members for Sen. Harry Reid would not say when — or if — legislation establishing the monument might be introduced, but spokesman Zac Petkanas said the Senate majority leader believes Tule Springs and the Upper Las Vegas Wash “deserve special protection.”

Advocates want the National Park Service to provide that protection, in part because that would likely block a plan by NV Energy to build a new transmission line through the proposed monument.

NV Energy’s commitment to the transmission project hasn’t changed, and its official comment hasn’t either.

In a written statement, the company insists the line is needed to address reliability, expansion and the future delivery of renewable energy into its system.

“NV Energy continues to work with our partners in local government and with proponents of the national monument,” the statement says. “Our current proposal allows for the co-existence of both the national monument area and NV Energy’s transmission lines, while minimizing the impact to the valuable resources in the Upper Las Vegas Wash.”

The company issued an identical statement in September 2010.

DeStefano said opposition to the power line is as strong and diverse as the support for the monument is. But she is done predicting when the proposal might make its way to Congress.

“Two years ago, I would have told you legislation was imminent,” DeStefano said. “I just keep hoping it’s moving in that direction.”

She also hopes that after this week, there will be an army of researchers with rock hammers on her side, eager to help things along.