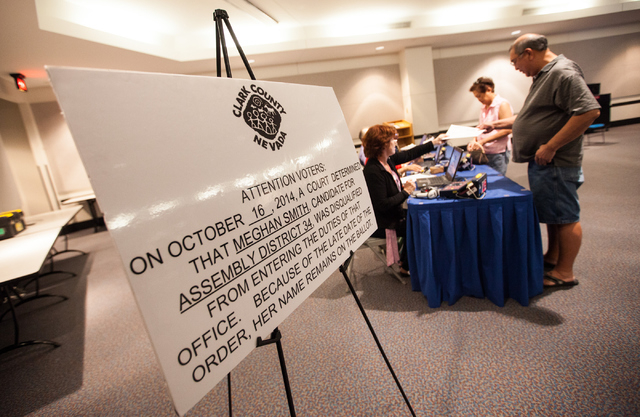 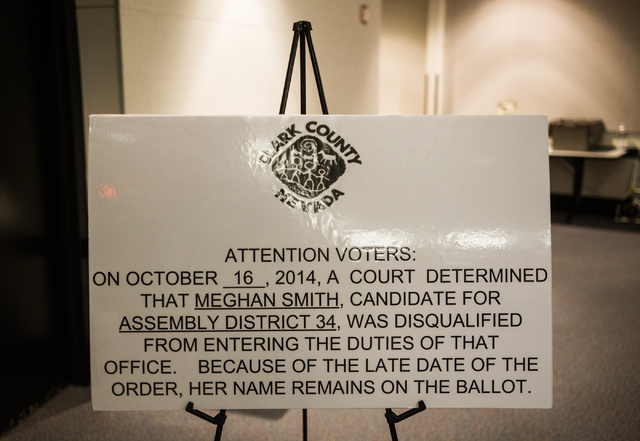 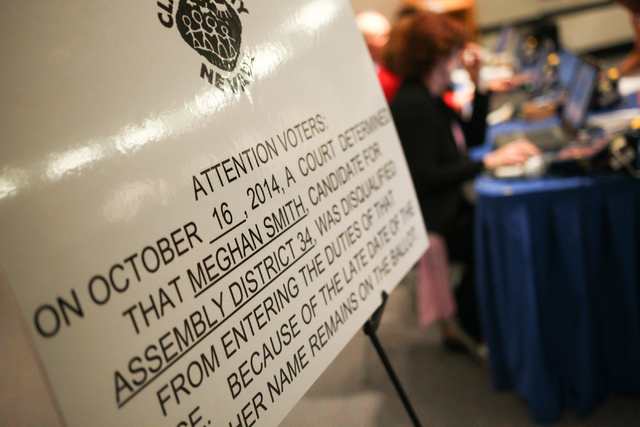 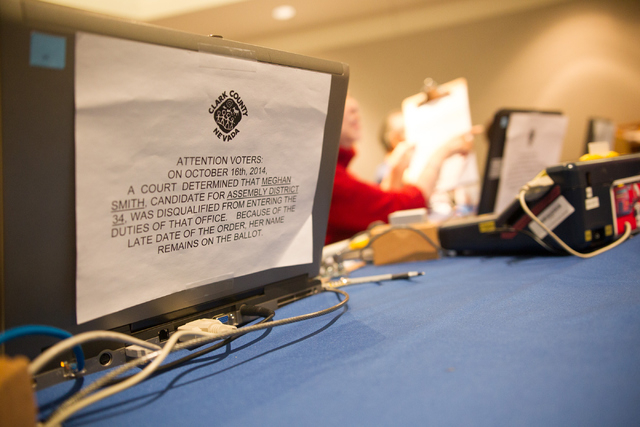 Meghan Smith, who lost a District Court ruling that she was ineligible to win a Las Vegas seat in the Nevada Assembly, lost a second legal battle Monday, this one with the Nevada Supreme Court.

Smith, who was disqualified as a candidate in the Assembly District 34 race, failed in her Supreme Court bid to have signs removed from polling places that informed voters about her ineligibility.

But Assembly Speaker Marilyn Kirkpatrick said Wednesday that she won’t rule out the possibility that Smith could win an Assembly seat through appointment.

That would be the second time a Nevada Democratic Assembly candidate was ruled ineligible to win a seat due to residency requirements, only to became a legislator anyway. Andrew Martin served in the lower house, and is now a candidate for state treasurer.

Smith had filed a motion seeking to overturn District Judge Nancy Allf’s order requiring the placement of signs at polling places listing her as an ineligible candidate. The Supreme Court denied the motion, which allows the signs to remain in place.

Allf had ruled Oct. 16 that Smith is ineligible as a candidate for the seat because she failed to meet the residency requirements. Smith had filed as a candidate on March 14, just seven days after closing on the purchase of a condominium located within the Assembly district.

Because of the timing of the ruling, Smith’s name will remain on the ballot, despite her disqualification. The only eligible candidate is Republican Victoria Seaman.

If Smith garners the most votes, the Democrat-controlled Assembly would select someone for the seat. That could theoretically be Smith.

“Why would we do that?” Kirkpatrick said Wednesday. “She’s on the ballot, right?

“At this point, our No. 1 goal is to win the seat. Then the Legislature as a whole will look at all of the options.”

Kirkpatrick didn’t name any favorites in lieu of Smith, explaining that lawmakers would consider “everybody” qualified for the post.

Asked what he would do in Kirkpatrick’s place, Assembly Minority Leader Pat Hickey, R-Reno, said simply: “I’m not in Marilyn’s shoes.”

Hickey stressed that a Seaman win would put an end to any future controversy over appointing Smith.

Hickey said Republican polling data that suggest Seaman could overcome a 12 percent voter registration gap to beat the disqualified Democrat. Every time someone passes by a polling station sign advertising her disqualification, he figures Smith’s odds of winning grow a little longer.

If Smith winds up in the seat, Hickey will pursue legislation clarifying Nevada’s election residency laws, reviving a bill he and Kirkpatrick first co-authored and introduced in 2013. That bill stalled.

Smith filed a notice of appeal with the Nevada Supreme Court. With that appeal pending, Smith had unsuccessfully sought removal of the posted signs declaring her ineligibility, arguing in court filings that the signs “will very certainly cause voters not to vote for Ms. Smith.”

If a ruling later overturns the initial determination of ineligibility, Smith argues, “it will be too late to remedy the effects of the sign posting.”

The race for Assembly District 34 in northwest Las Vegas was wide open because Assembly Majority Leader William Horne is termed out. Horne, a Democrat, was elected in 2012 with 57 percent of the vote.

Registered Democrats outnumber registered Republicans in the district. Democrats make up 43 percent, while Republicans account for 31 percent. Another 19 percent don’t have any party affiliation. The remaining 7 percent belong to third parties.

Republican hopeful Seaman said she wasn’t surprised by Smith’s disqualification from the race, a development she expects will be a “tremendous help” to her campaign. Seaman was doing her best to spread the word about the potentially race-altering ruling Wednesday afternoon, knocking on doors and handing out copies of the judgment to voters.

Smith did not return requests for comment. In her outgoing voice mail message, she makes it clear that she remains “on your ballot” come Nov. 4.