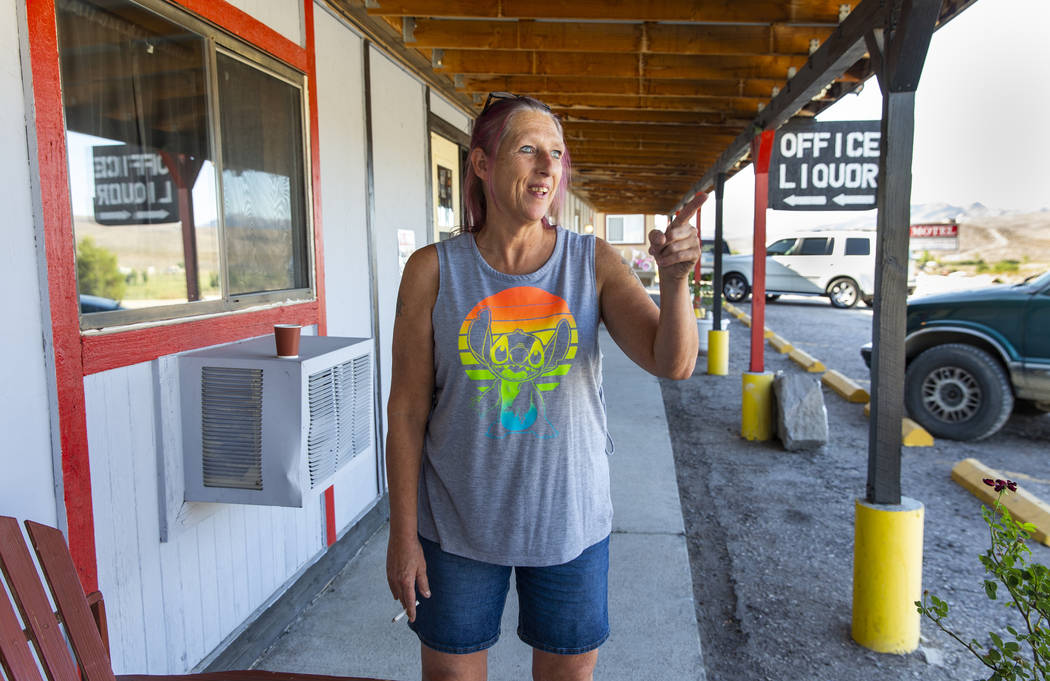 The Sunset View Inn owner Pam Broxson on U.S. Route 93 talks about already being booked yet they are still a good spot for liquor purchases for those traveling to Hiko and Rachel for the upcoming Alienstock festival on Tuesday, Aug. 27, 2019, in Alamo. (L.E. Baskow/Las Vegas Review-Journal) @Left_Eye_Images 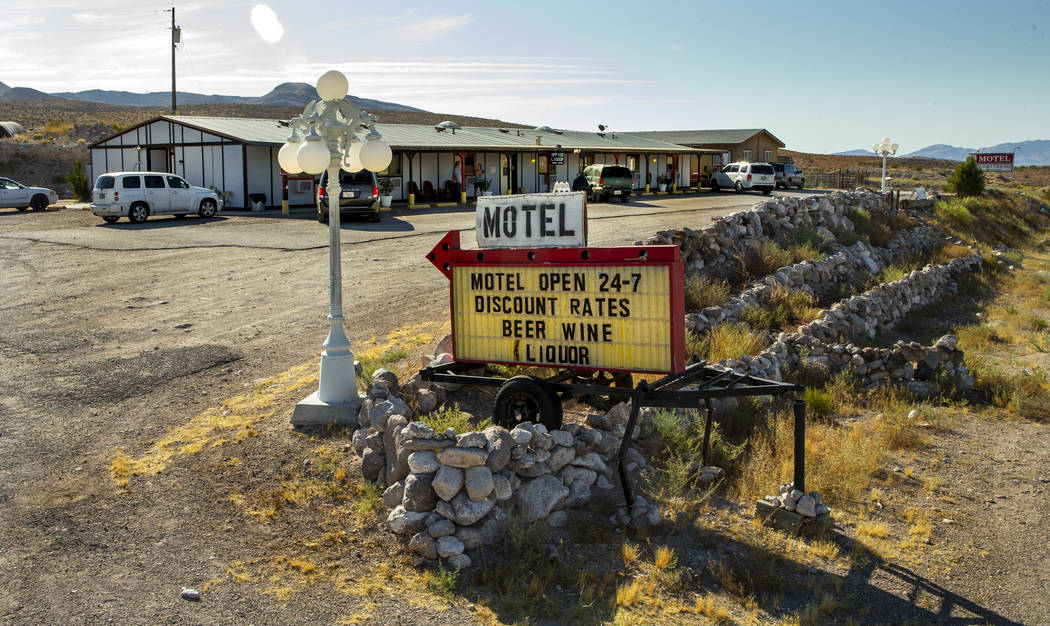 The Sunset View Inn on U.S. Route 93 is already booked yet is still a good spot for liquor purchases for those traveling to Hiko and Rachel for the upcoming Alienstock festival on Tuesday, Aug. 27, 2019, in Alamo. (L.E. Baskow/Las Vegas Review-Journal) @Left_Eye_Images 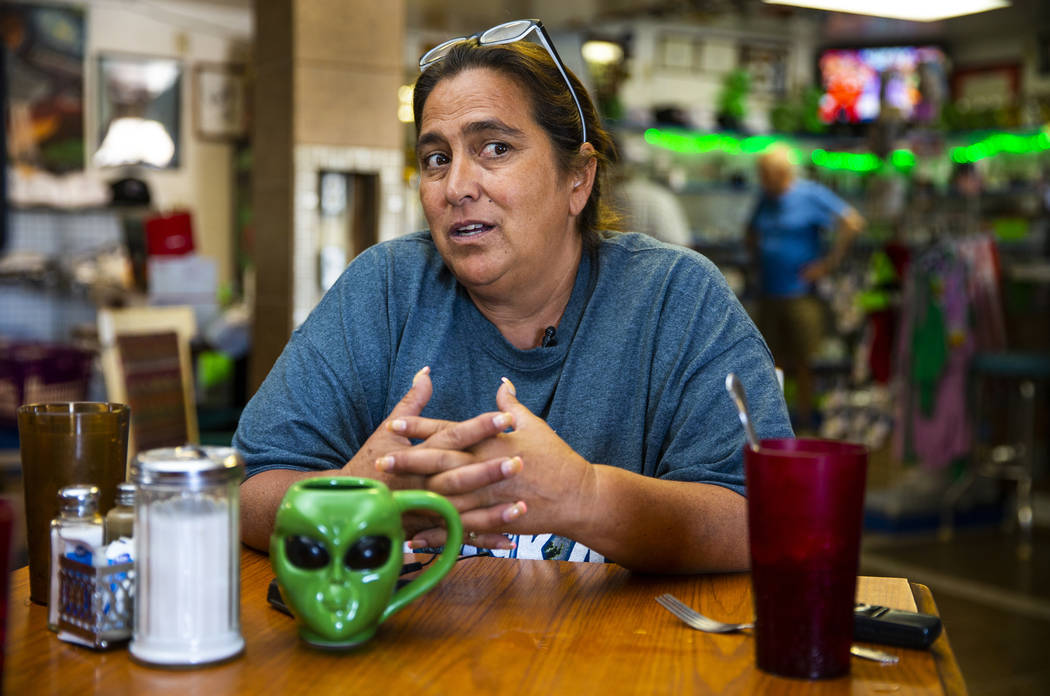 Connie West, with the Little A'Le'Inn in Rachel along the Extraterrestrial Highway/state Route 375, talks about the place being a gathering site for the upcoming Alienstock festival in September, on Tuesday, Aug. 27, 2019. (L.E. Baskow/Las Vegas Review-Journal) @Left_Eye_Images 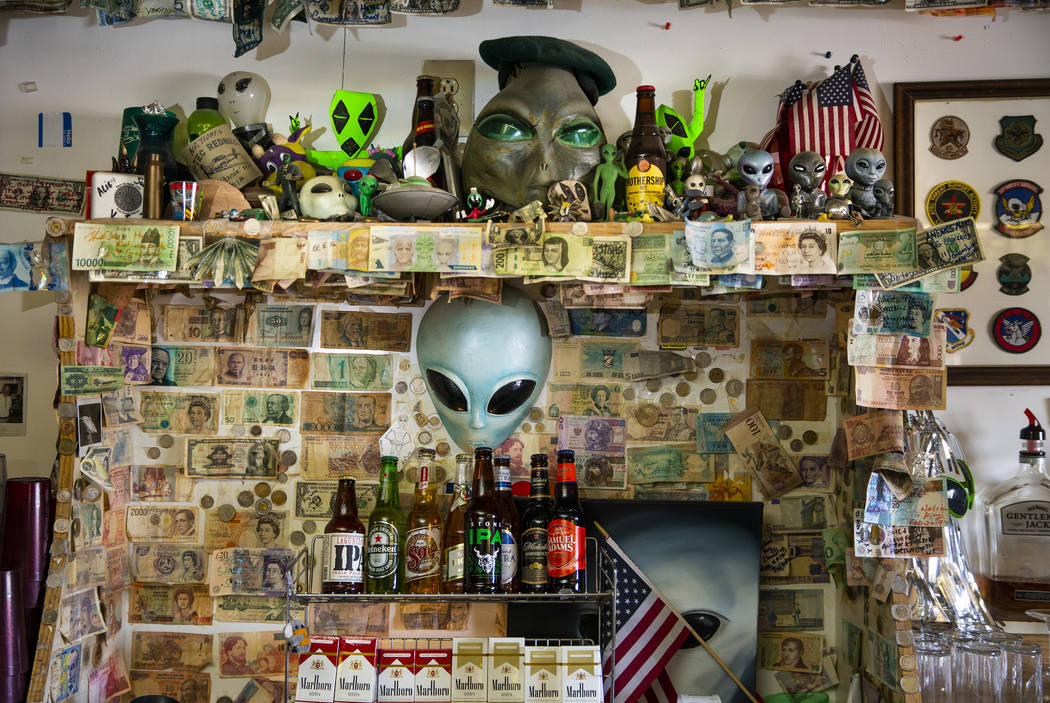 Alien memorabilia behind the bar and the restaurant at the Little A'Le'Inn in Rachel, which will be a gathering site for the upcoming Alienstock festival in September, on Tuesday, Aug. 27, 2019. (L.E. Baskow/Las Vegas Review-Journal) @Left_Eye_Images 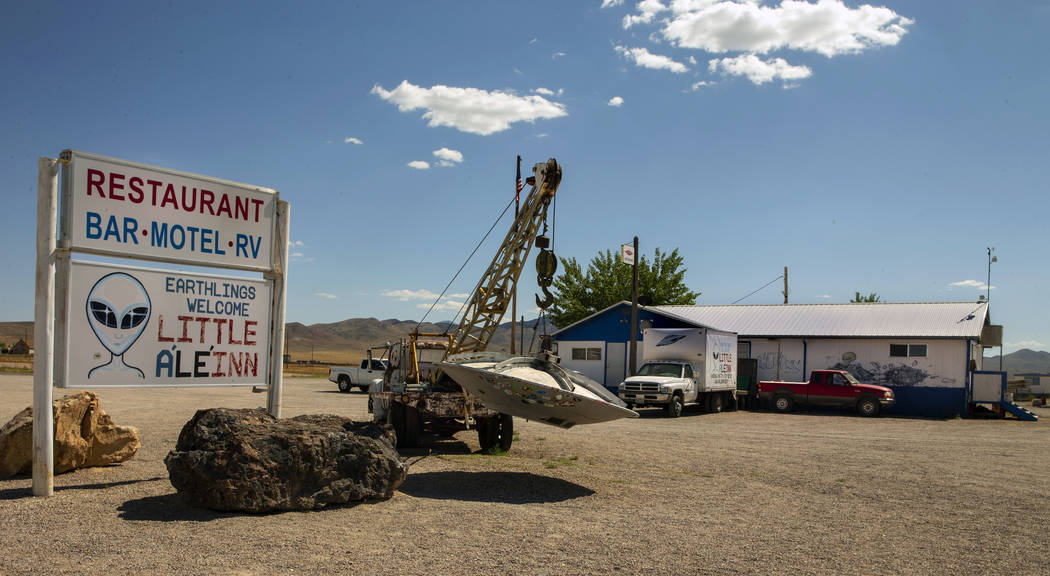 The Little A'Le'Inn Rachel will be a gathering site for the upcoming Alienstock festival in September, on Tuesday, Aug. 27, 2019. (L.E. Baskow/Las Vegas Review-Journal) @Left_Eye_Images 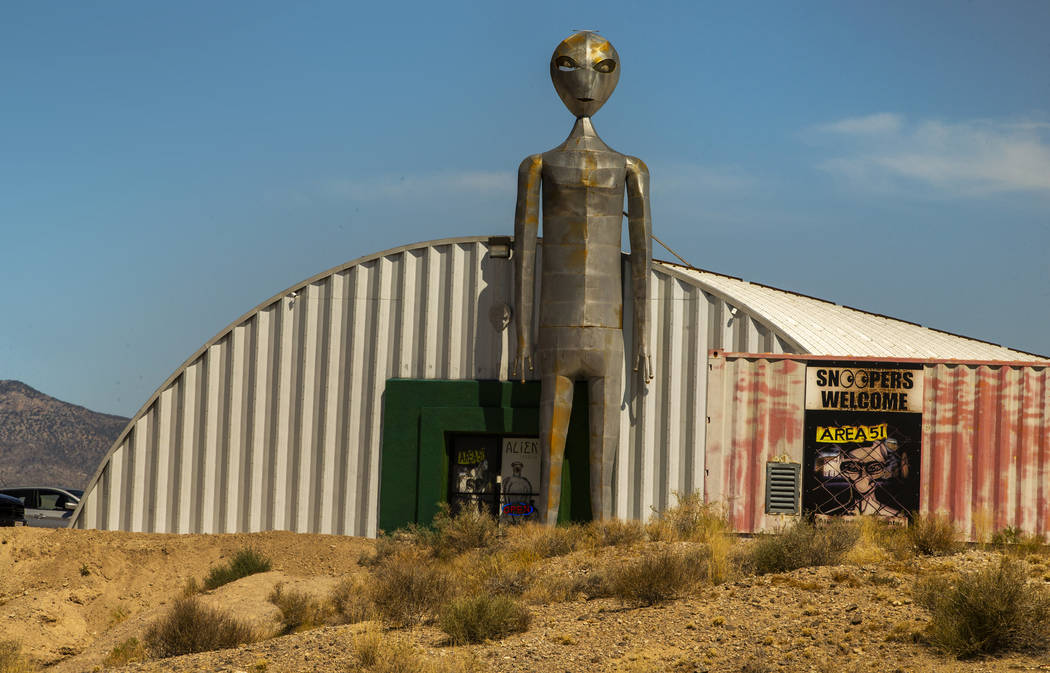 The Alien Research Center in Hiko will be a gathering site for the upcoming Alienstock festival in September complete with music, food, education, parking and more, on Tuesday, Aug. 27, 2019. (L.E. Baskow/Las Vegas Review-Journal) @Left_Eye_Images 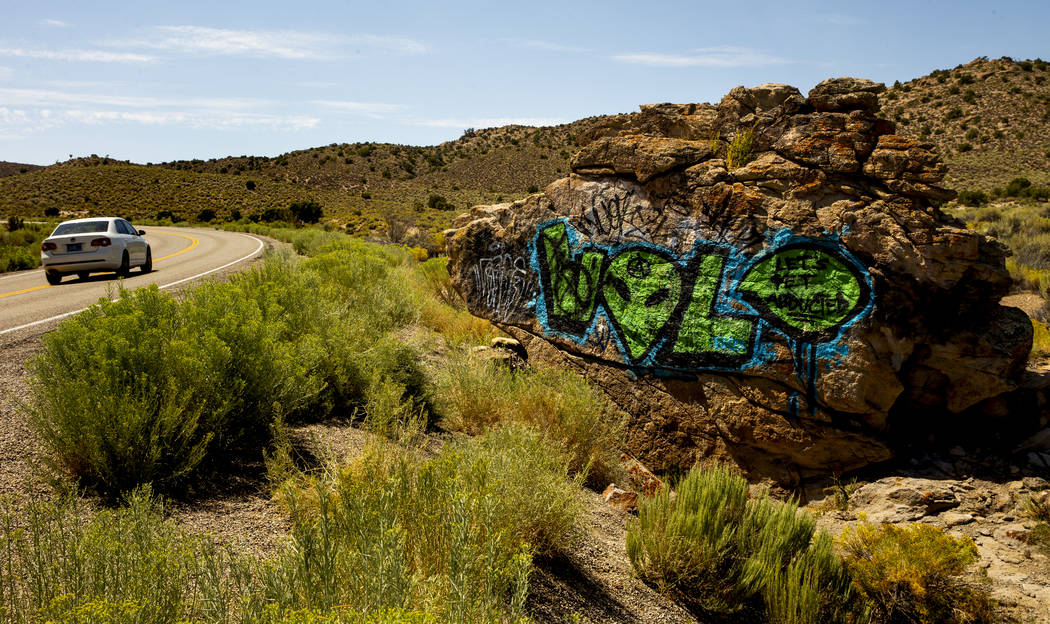 A rock is painted with an alien along the Extraterrestrial Highway/state Route 375 sits between Rachel and Hiko, where the upcoming Alienstock festival will be in September, on Tuesday, Aug. 27, 2019. (L.E. Baskow/Las Vegas Review-Journal) @Left_Eye_Images 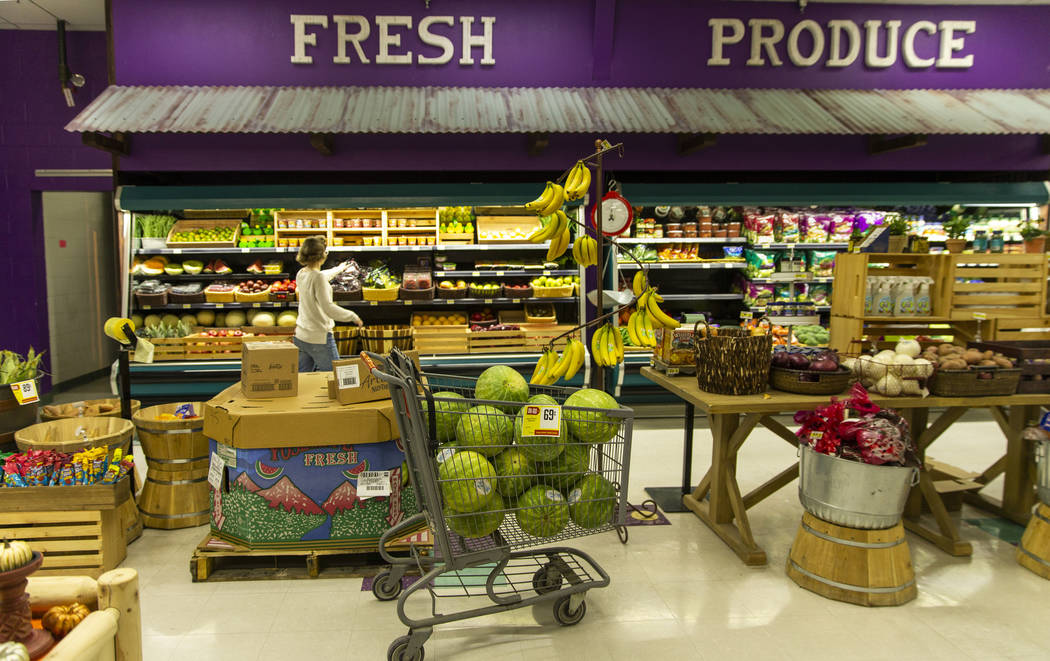 The Great Basin Foods store along U.S. Highway 93 offers the largest selection of food and supplies with the nearest location for those traveling around Hiko and Rachel for the upcoming Alienstock festival in September, on Tuesday, Aug. 27, 2019, in Alamo. (L.E. Baskow/Las Vegas Review-Journal) @Left_Eye_Images 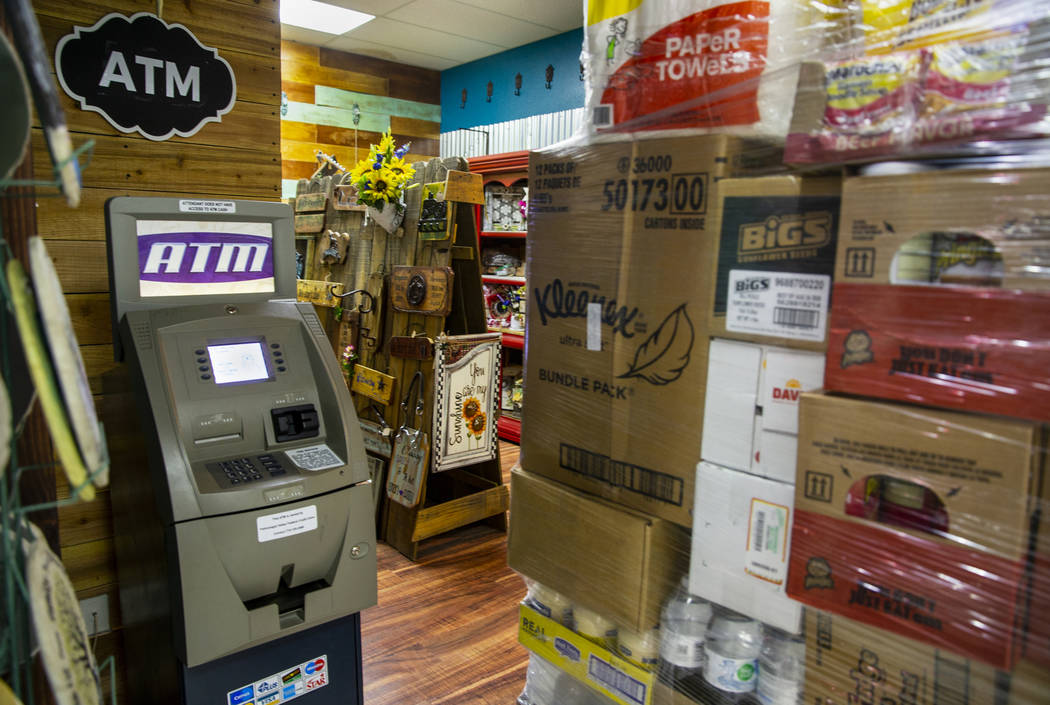 The Great Basin Foods store along U.S. Highway 93 offers an ATM along with the largest selection of food and supplies in the nearest location for those traveling around Hiko and Rachel for the upcoming Alienstock festival in September, on Tuesday, Aug. 27, 2019, in Alamo. (L.E. Baskow/Las Vegas Review-Journal) @Left_Eye_Images 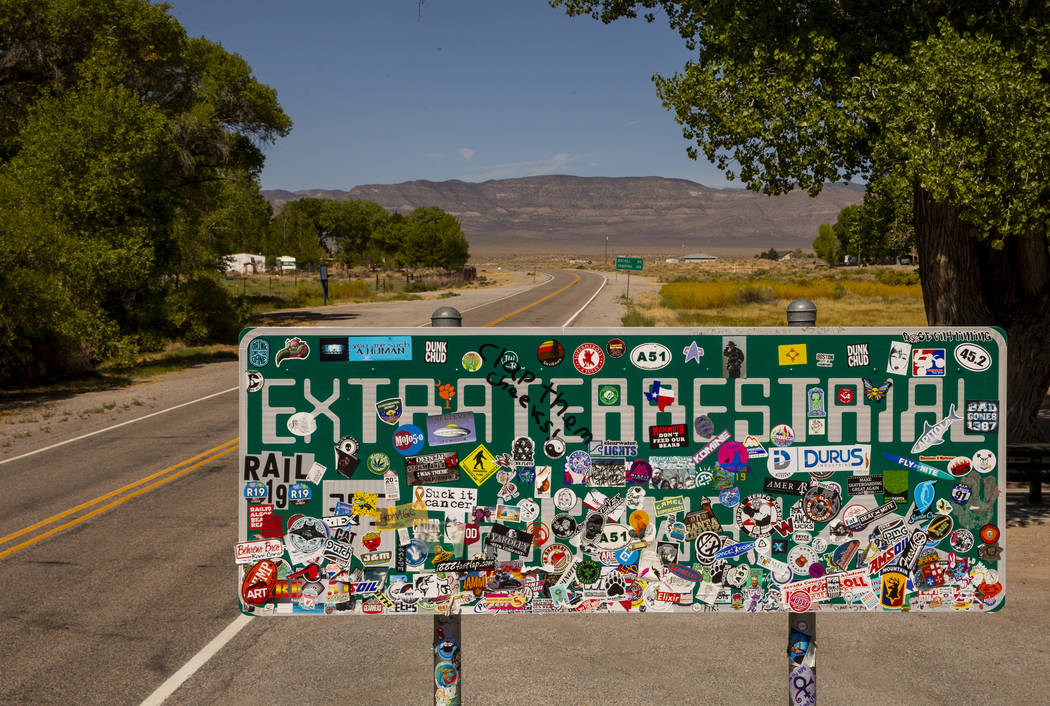 A sign noting the Extraterrestrial Highway/state Route 375 will be heavily traveled around Hiko and Rachel for those attending the upcoming Alienstock festival in September, on Tuesday, Aug. 27, 2019, in Hiko. (L.E. Baskow/Las Vegas Review-Journal) @Left_Eye_Images

With thousands of visitors expected at “Storm Area 51” events in Hiko and Rachel next month, small businesses on the way to the rural towns are bracing for the invasion.

Alamo, nearly 100 miles north of Las Vegas and with a population of about 1,000, has some of the last stops for gas, food and liquor before the final 52-mile trek to Rachel, where the main event, Alienstock, is set for Sept. 20-22.

Cheyenne Bowman, a cashier at Great Basin Foods, a mid-size grocery in Alamo, is stocking up ahead of the Area 51 festivities. She called it the “biggest thing this town has seen.”

“We will be increasing our orders, and we’ll also be changing our hours,” said Bowman, who has lived in Alamo off and on for 12 years. “We’re going to have mandatory working hours for different employees.”

Along with the increased hours, the store plans to hire outside security during that time, she said.

“We are nervous because there are a lot of female employees here,” she said. “We’ll be nervous working those increased hours, but we’ll be greatly thankful for that increased security.”

Another problem could be brewing under the surface.

“In the valley, sewer and septic is limited, so a lot of establishments are going to have to bring in port-a-potties, hand wash stations and other extra stuff because we just can’t handle the capacity of these people all at once,” Bowman said.

Pam Broxson, owner of the Sunset View Inn, said she is nearly sold out on the days surrounding the event and is cautiously looking forward to it.

“As long as they don’t destroy my rooms, they can come here and have fun,” she said. “I have plenty of property out back. You can do what you want to do, just don’t destroy it yet.”

Each room is themed, Broxson said, and an alien-inspired one will be ready ahead of that weekend.

With the hotel sitting along U.S. Highway 93, traffic could be the biggest issue of all.

Connie West, owner of the Little A’Le’Inn in Rachel, is coordinating the Facebook-hoax-turned-festival for Matty Roberts, the Bakersfield, California, man who started the internet craze. West said she obtained a mass gathering permit for up to 10,000 people from Lincoln County.

The festival featuring music, food and other entertainment will take place on a 65-acre lot, with a large portion of that slated for vehicle and RV parking and camping. Genres will include country, rock and roll and electronic dance music, West said.

The event is free, but parking starts at $60 for the weekend.

West said she plans to install in a portable stage, multiple port-a-potties, portable showers, a water station, a hand washing station and giant trash bins. There will be 100 security guards on site, some of them armed.

The event is garnering attention worldwide, as 96 media requests have been received, from outlets from as far as Denmark expressing interest in the event, West said.

Although not ready to make a commitments before the event, West said the possibility of making Alienstock an annual occurrence has crossed her mind.

“I hope that this is going to showcase what can be done,” she said. “I’m in business to stay in business. I hope it turns into a thing, a yearly thing.

“… I’ve jumped through every hoop I’ve been asked to, and I am sure there is going to be a few more. I’m just as terrified as the next person … but I’m just excited to see this happen. I’ve kind of been portrayed as the ignorant alien bartender from Rachel, and I’m excited to show the world what I can do.”