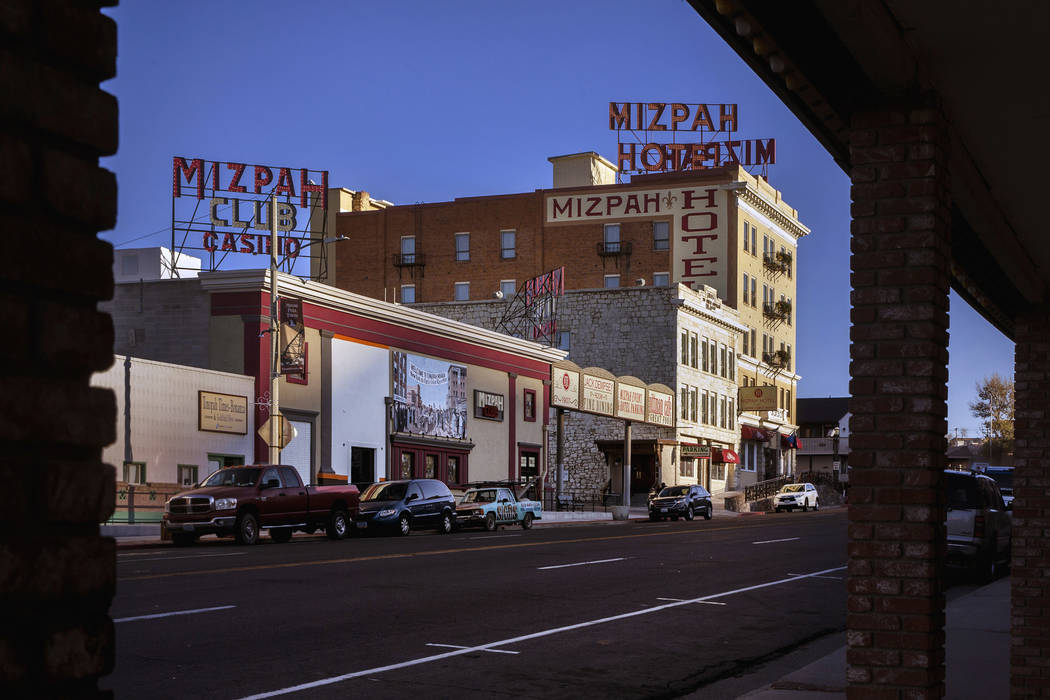 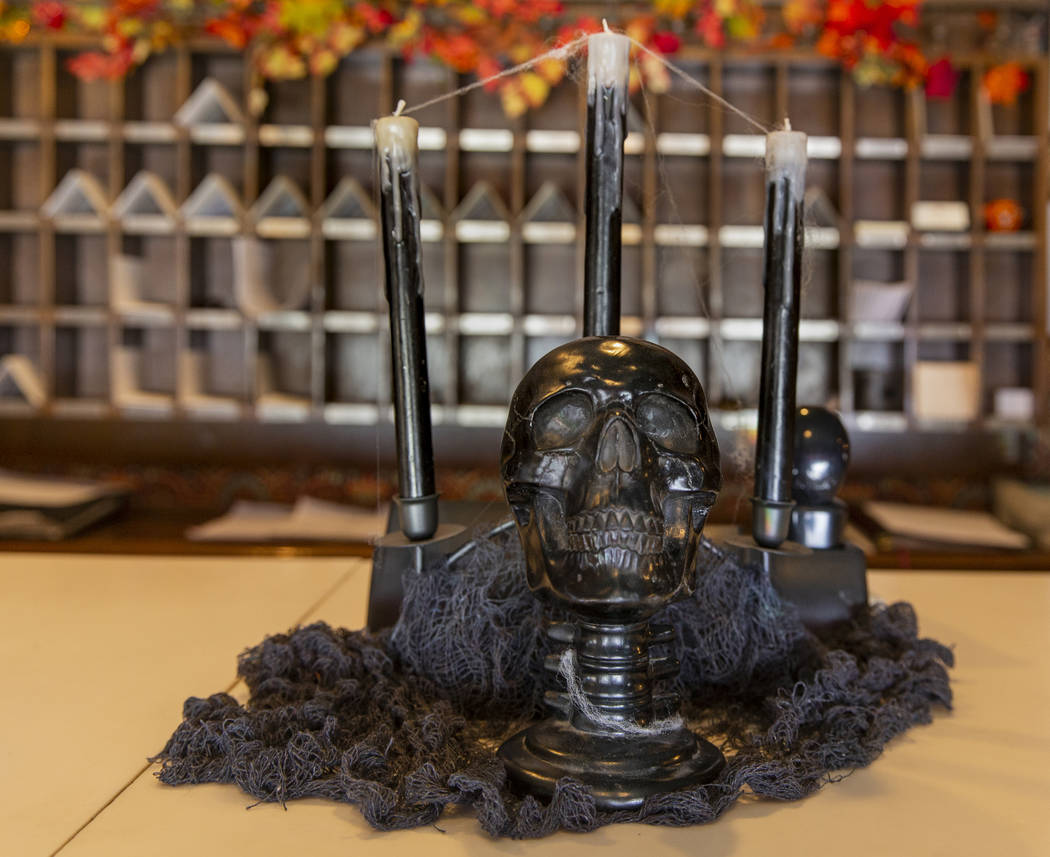 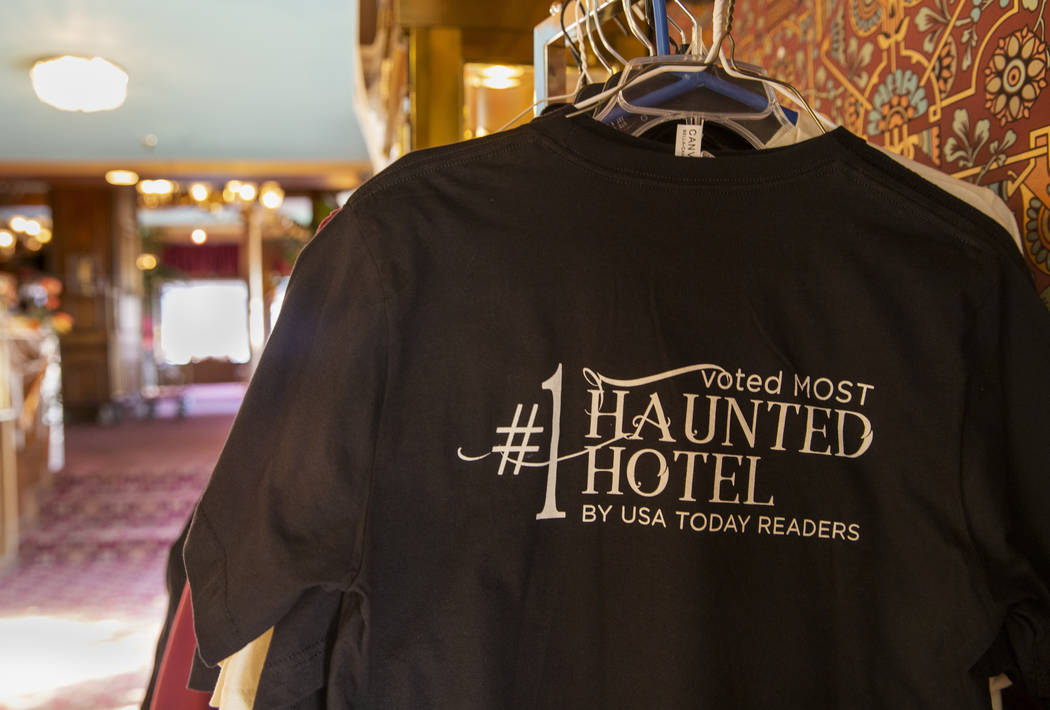 T-shirts for sale in the lobby stating the Mizpah Hotel in Tonopah, Nevada, was voted as the "#1 Most Haunted Hotel" by USA Today readers on Wednesday, Oct. 30, 2019. (L.E. Baskow/Las Vegas Review-Journal) @Left_Eye_Images 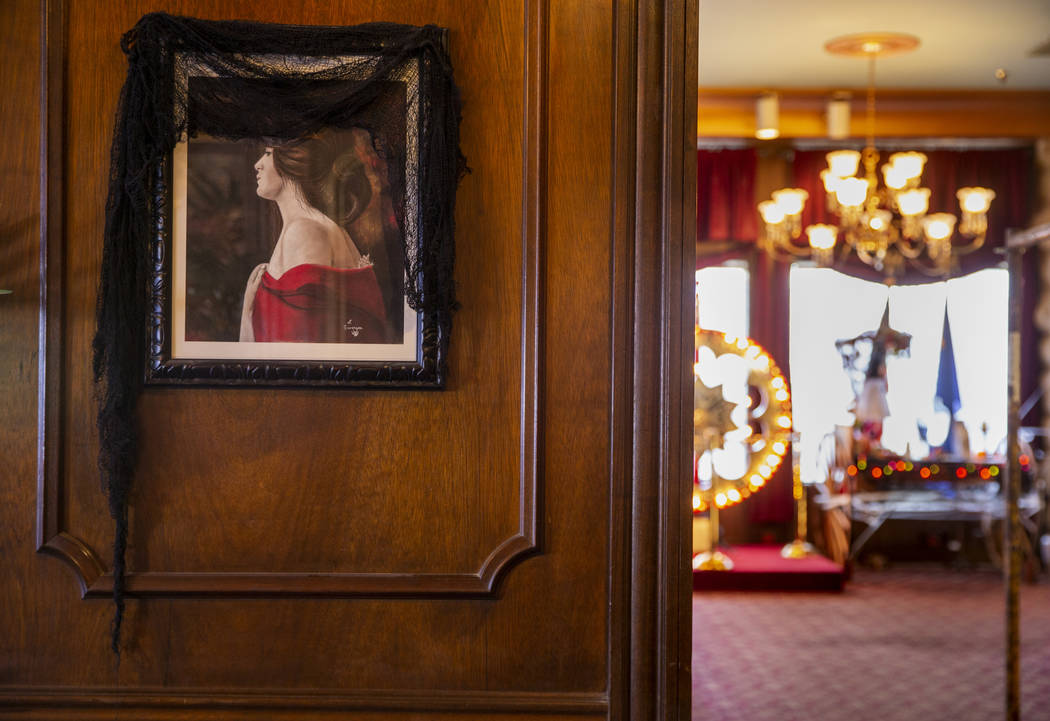 A portrait of "The Lady in Red" hangs in the sitting room of the Mizpah Hotel in Tonopah, Nevada, on Wednesday, Oct. 30, 2019. She was killed by her jealous boyfriend outside room 502 and is known to haunt the hotel. (L.E. Baskow/Las Vegas Review-Journal) @Left_Eye_Images 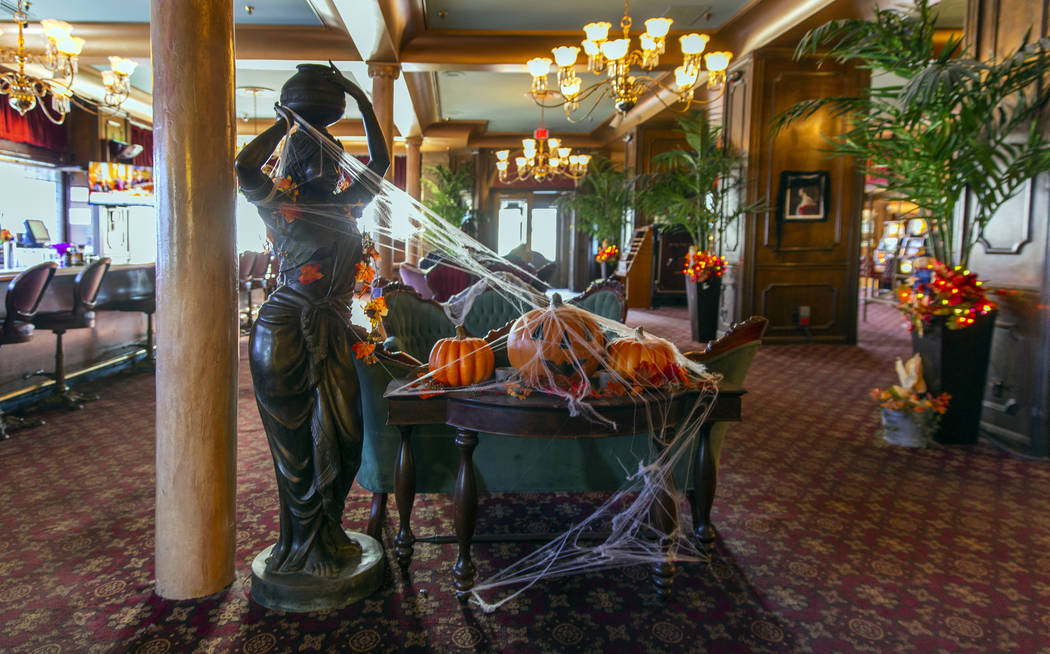 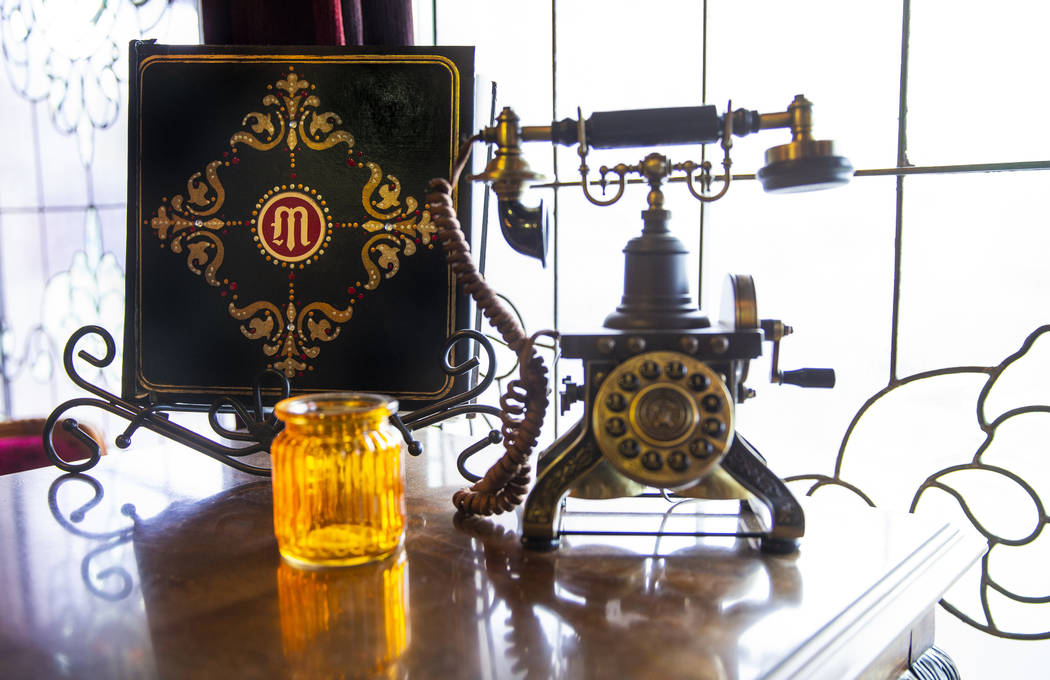 A book of ghosts stories penned by guests over the years sits on a table across from the front desk in the Mizpah Hotel in Tonopah, Nevada, on Wednesday, Oct. 30, 2019. (L.E. Baskow/Las Vegas Review-Journal) @Left_Eye_Images 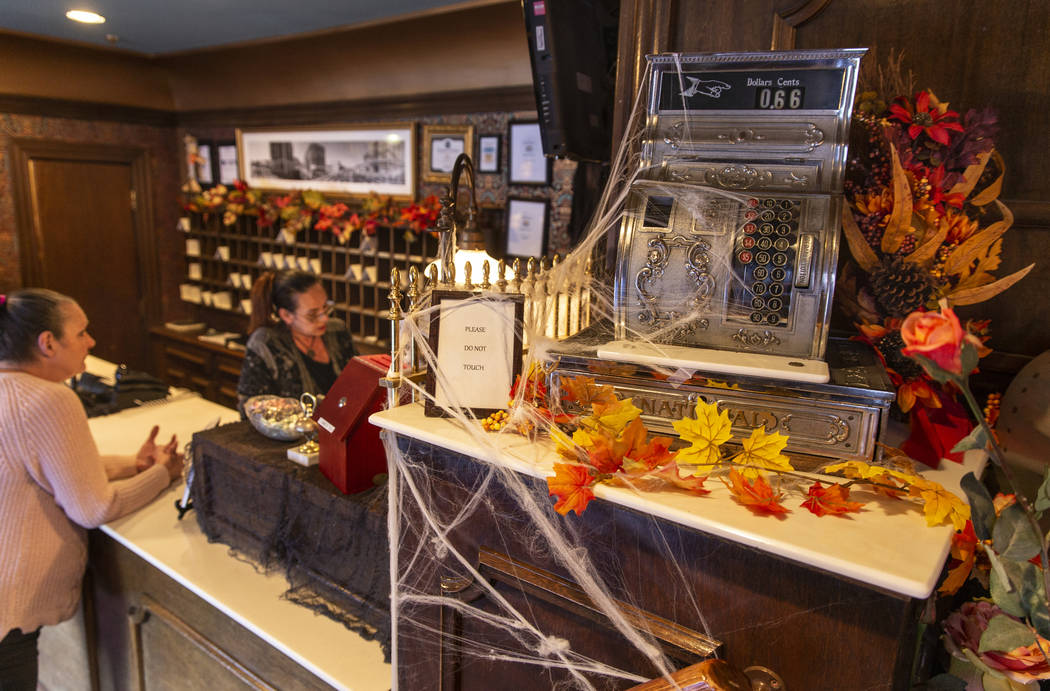 An old cash register and Halloween decorations near the front desk in the Mizpah Hotel in Tonopah, Nevada, on Wednesday, Oct. 30, 2019. (L.E. Baskow/Las Vegas Review-Journal) @Left_Eye_Images 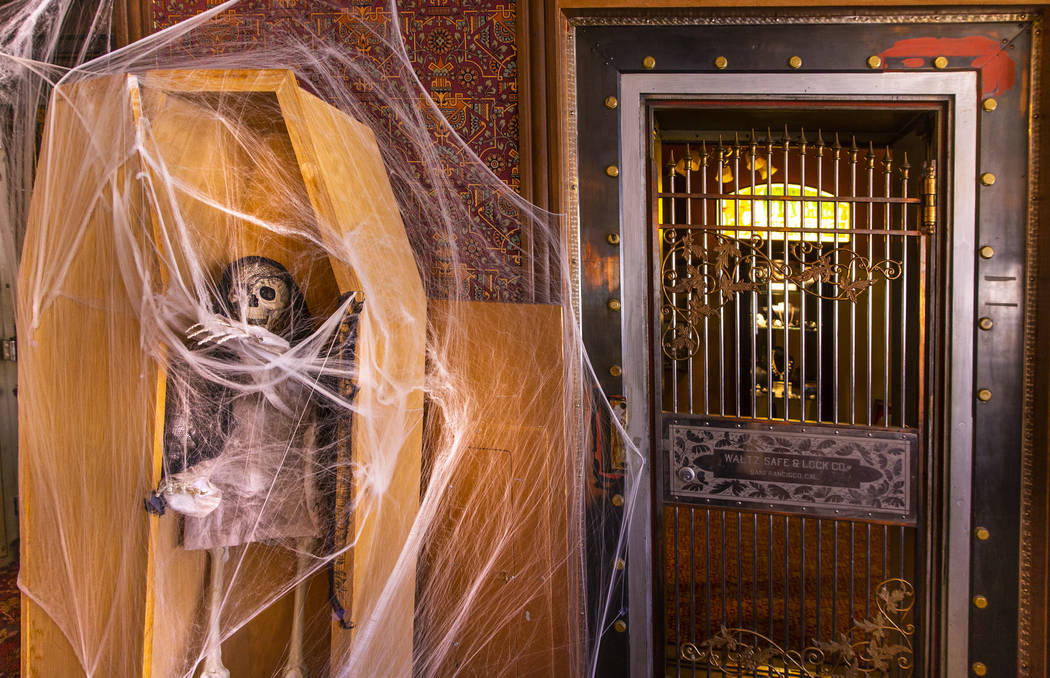 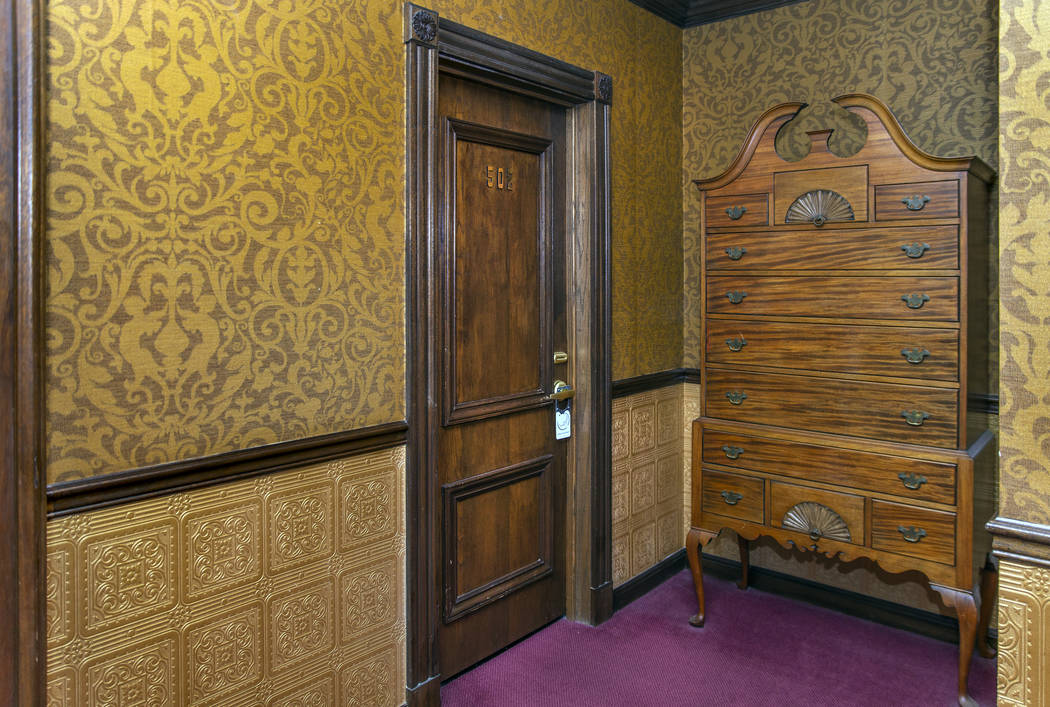 Outside of room 502 is where the "The Lady in Red" is said to have died at the Mizpah Hotel in Tonopah, Nevada, on Wednesday, Oct. 30, 2019. She was killed by her jealous boyfriend and is known to haunt the hotel. (L.E. Baskow/Las Vegas Review-Journal) @Left_Eye_Images 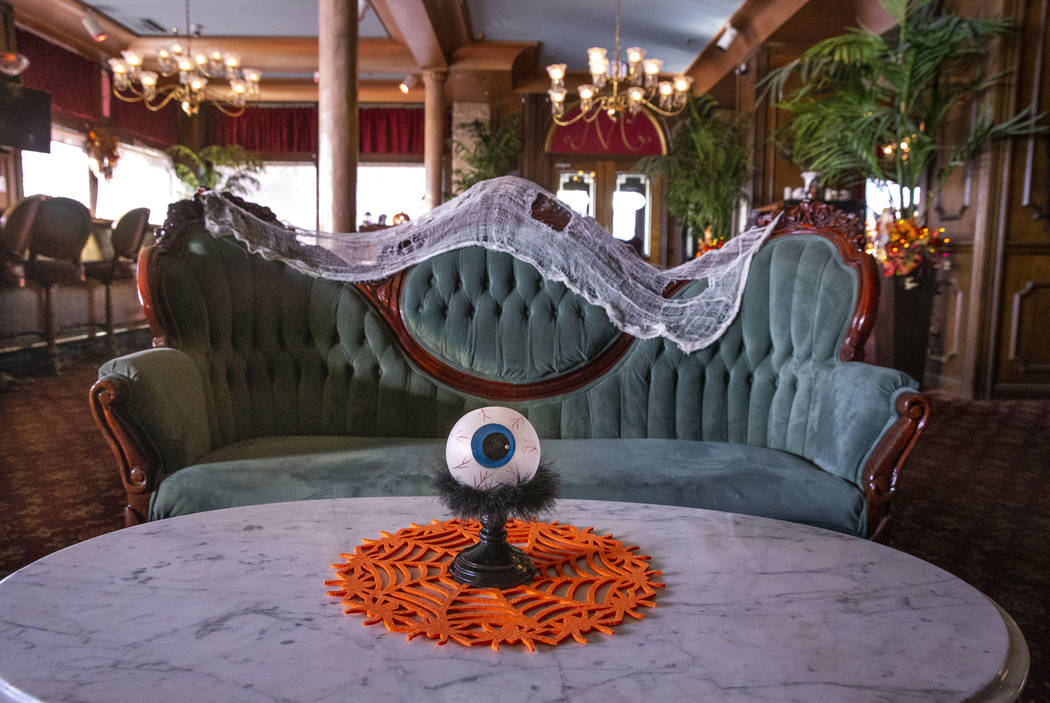 A large eyeball and Halloween decorations about the sitting room at the Mizpah Hotel in Tonopah, Nevada, on Wednesday, Oct. 30, 2019. (L.E. Baskow/Las Vegas Review-Journal) @Left_Eye_Images

Tonopah’s Mizpah Hotel doesn’t shy away from its status as one of the top haunted hotels in America. Especially this time of year.

The hotel, built in 1907 and renovated in 2011, acknowledges on its website that it was voted the top haunted hotel in a recent USA Today Readers’ Choice awards. The honor was bestowed a second time this year. T-shirts bear the legend “Voted #1 Most Haunted Hotel.”

At the heart of its haunted status is the legend of the Lady in Red. As the story goes, the Lady in Red was a prostitute who conducted her business with Mizpah patrons in the 1920s. A wealthy man is said to have killed her in a room on the fifth floor in a fit of rage after learning he was only one of her many customers.

Legend has it that the ghost of the lady roams the hotel to this day. Some who say they have seen her have discovered a pearl on their pillows or nightstands, according to a Review-Journal story.

Another version of the tale says her husband caught the woman cheating on him at the hotel after he had missed a train. He then beat her to death in a room, now often requested by guests who believe in the paranormal.

On Halloween eve, the interior of the hotel was decked out with cobwebs, candles, pumpkins and skeletons.

Gracing a table across from the hotel’s front desk is a book of ghost stories penned by guests over the years, and a portrait of the Lady in Red hung in the hotel’s sitting room.