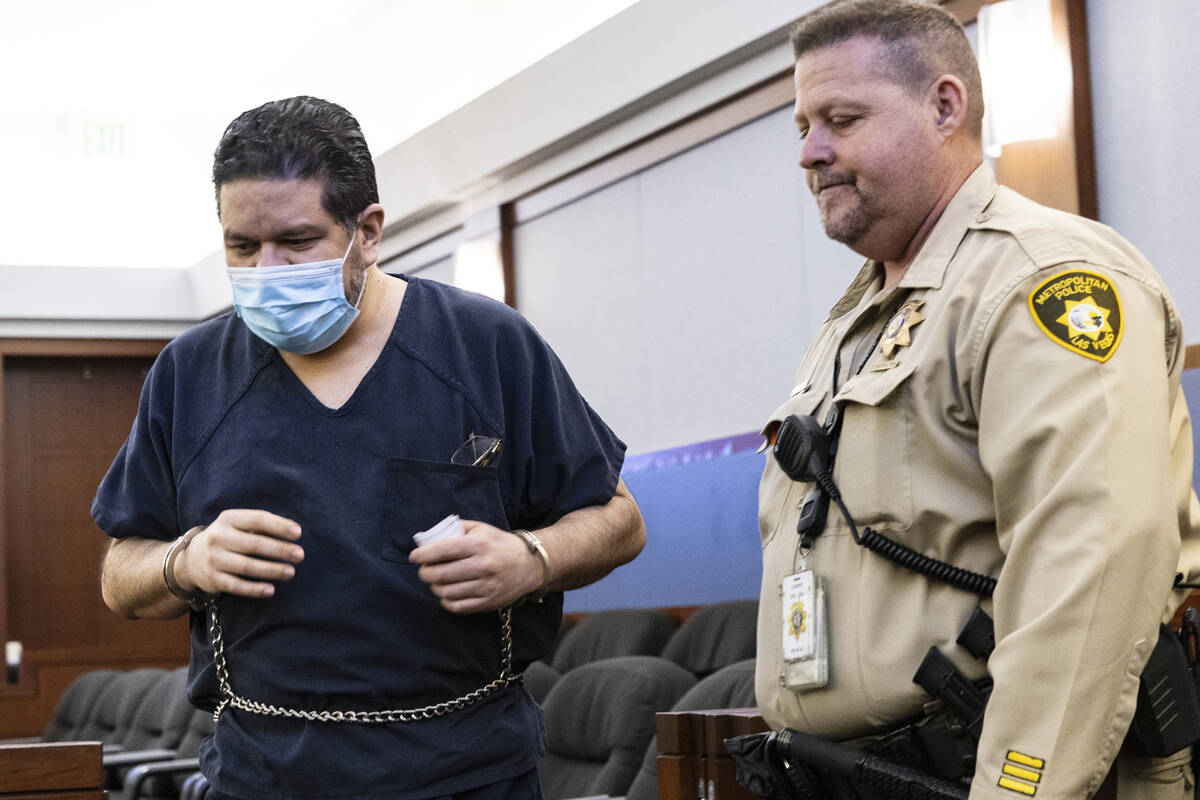 Bramwell Retana, a pastor who has pleaded guilty to child sexual assault charges, led out of the courtroom for a break during his sentencing at the Regional Justice Center, on Wednesday, Jan. 25, 2023, in Las Vegas. (Bizuayehu Tesfaye/Las Vegas Review-Journal) @btesfaye 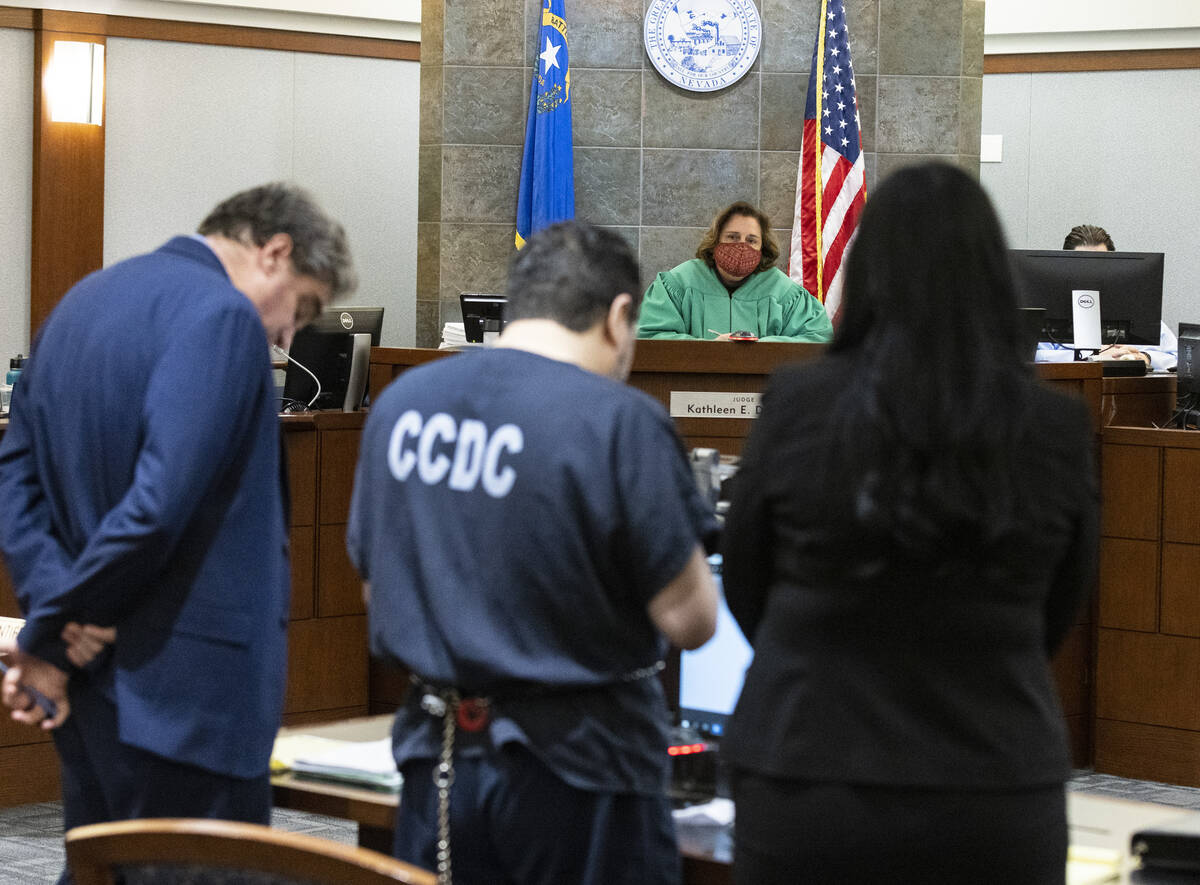 Bramwell Retana, center, a pastor who has pleaded guilty to child sexual assault charges addresses the court as Judge Kathleen E. Delaney looks on during his sentencing at the Regional Justice Center, on Wednesday, Jan. 25, 2023, in Las Vegas. (Bizuayehu Tesfaye/Las Vegas Review-Journal) @btesfaye 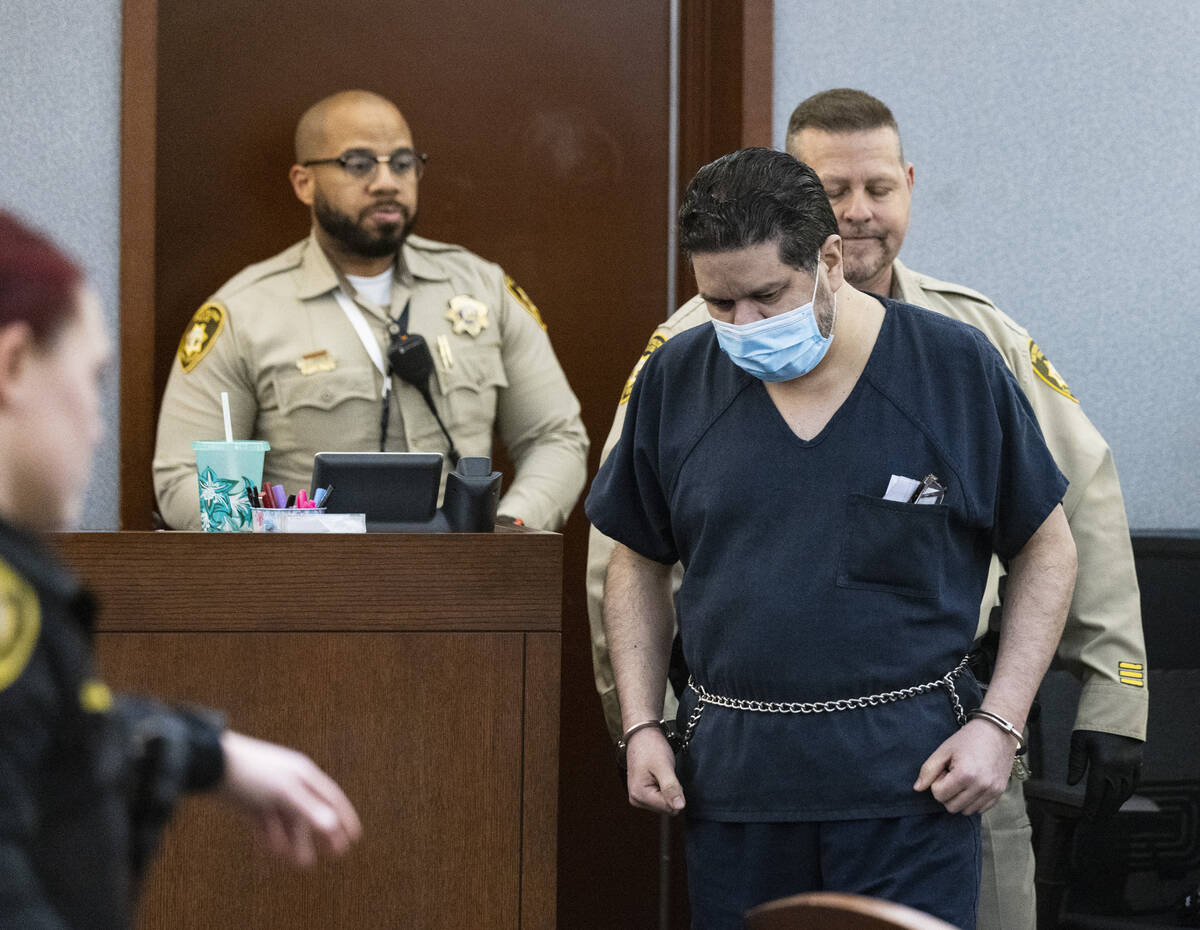 Bramwell Retana, a pastor who has pleaded guilty to child sexual assault charges, led into the courtroom during his sentencing at the Regional Justice Center, on Wednesday, Jan. 25, 2023, in Las Vegas. (Bizuayehu Tesfaye/Las Vegas Review-Journal) @btesfaye 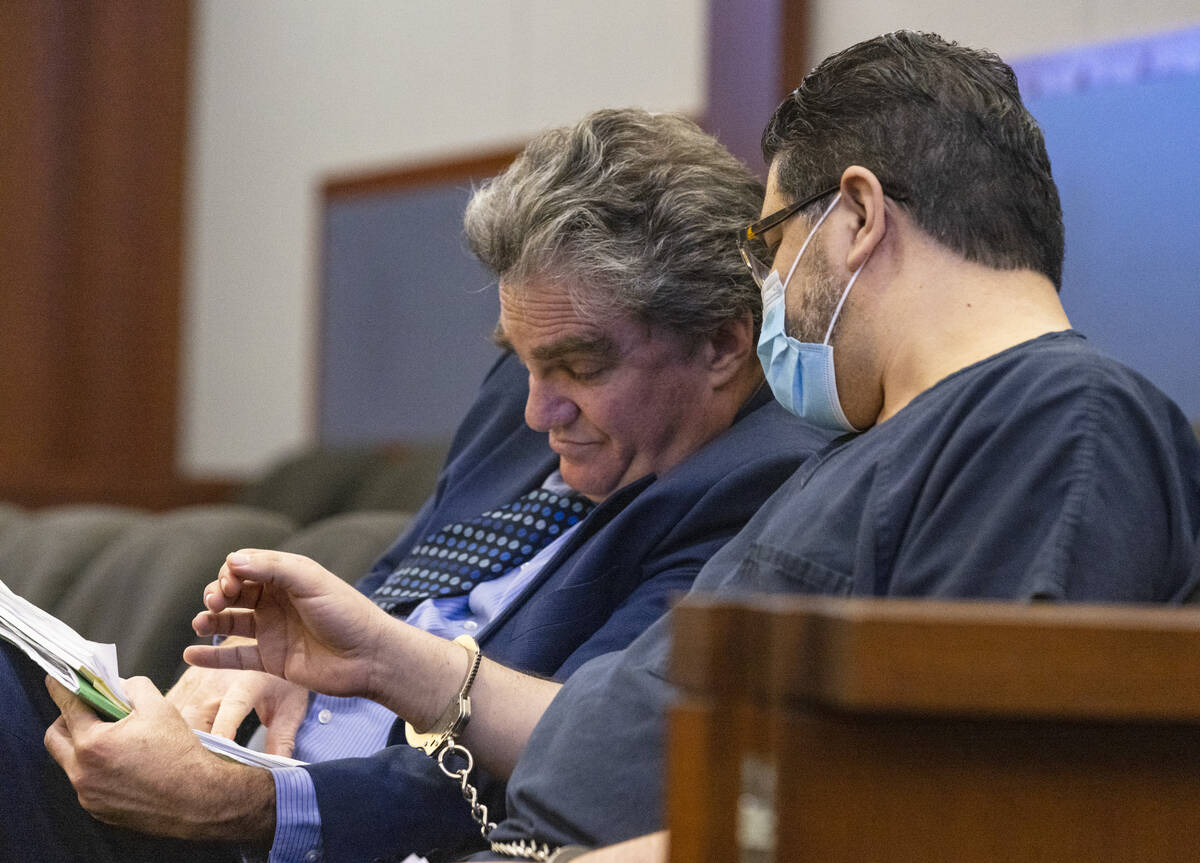 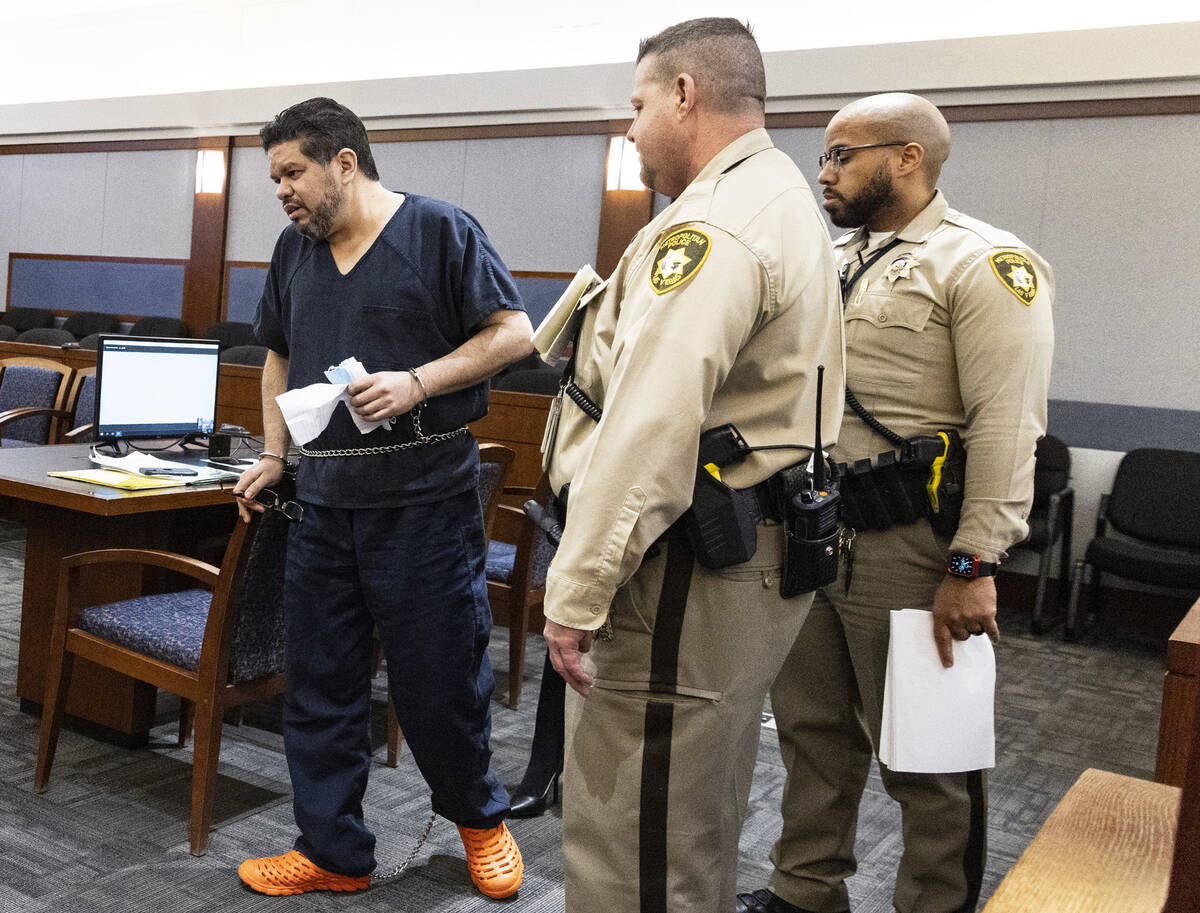 Bramwell Retana, a pastor who has pleaded guilty to child sexual assault charges, led out of the courtroom after his sentencing at the Regional Justice Center, on Wednesday, Jan. 25, 2023, in Las Vegas. (Bizuayehu Tesfaye/Las Vegas Review-Journal) @btesfaye

One by one the parents, broken and sobbing, took their turns addressing the court. They spoke of the damage wrought by their once-beloved pastor, who on Wednesday was sentenced to at least three decades in prison.

One father compared it to an atomic bomb going off in their lives.

“I feel like we’ve been killed, but somehow we’re still alive. It’s something you can’t repair,” said Joel Mario Calzada, the father of one victim.

Bramwell Retana, 47, a former pastor at Iglesia Cristiana Oasis De Paz, at Michael Way and West Lake Mead Boulevard in Las Vegas, had pleaded guilty to three counts of lewdness with a minor under 14.

Initially arrested in December 2019, at one point he faced 59 felony counts for sexual abuse targeting young girls in his congregation going back years.

In question on Wednesday was whether the disgraced former pastor would serve sentences of 10 years to life for each count concurrently or consecutively.

The families, while they said in court that they forgive Retana because of their faith in God, wanted the sentence that Delaney imposed and were happy with her decision, Prosecutor Stacy Collins said afterward.

“If it was true justice, I would order that your pain goes away, that your shame goes away,” Delaney said to the victims.

Their pain was evident in the courtroom at the Regional Justice Center. They spoke of struggles with depression, anxiety, panic attacks and self-harm.

“My life’s been very hard. My childhood was taken away from me,” said one victim, a girl who was only identified in court as N.D. “I’ve tried my best to cope with the pain, but it’s like, it never goes away.”

“I can’t eat sometimes, I can’t sleep,” another victim identified only as A.C. said through heaving sobs.

One victim, A.E., said she’s now scared of guys. “I know that sounds silly,” she said.

“No. It doesn’t,” Delaney interjected matter-of-factly.

The anguished parents spoke of their children waking up screaming in the middle of the night, cutting themselves and harboring suicidal thoughts.

“My fear is that as she grows older I fear that she is going to try to commit suicide or hurt herself from the trauma and the memories that she has lived through,” said parent Jenny Flores.

“Our daughters have had suicidal thoughts. They’ve harmed their bodies, and it’s not fair,” said Marisol Garcia.

Collins outlined the former pastor’s pattern of abusive behavior, explaining how he preyed upon the families of his tightly knit congregation while taking advantage of their trust and going to great lengths to keep his behavior a secret.

His abuse, which included sexual contact with the victims, also included “fetish behavior” that saw the pastor perpetrating acts on the girls that were obvious violations and done for Retana’s sexual gratification.

“Let’s be clear,” Collins said, “this was sexual in nature.”

Special public defender Jordan Savage argued that his client should serve concurrent sentences so that he might have a better chance at seeing his wife, who was deported to Costa Rica, according to court documents, and his 14-year-old son, who had to move to Costa Rica.

‘I feel horrible for all this’

For his part, Retana also addressed the court for about 10 minutes.

“Believe it or not, I love these people here,” he said, crying, his words also sparking sobs among the audience of about 20 victims and their relatives. “I have good memories with them. I was the minister when they got married. And I feel horrible for all this. I’m sorry.”

Afterward, the father of a victim said he was happy with how justice was served.

“My family, all the families, that’s what we were waiting for,” said Pedro Salomon Diaz. “Thirty years, to be honest with you, I feel like it’s nothing. After all the suffering, the damage, the psychological devastation created by him on (all) of these kids’ minds — it’s insane.