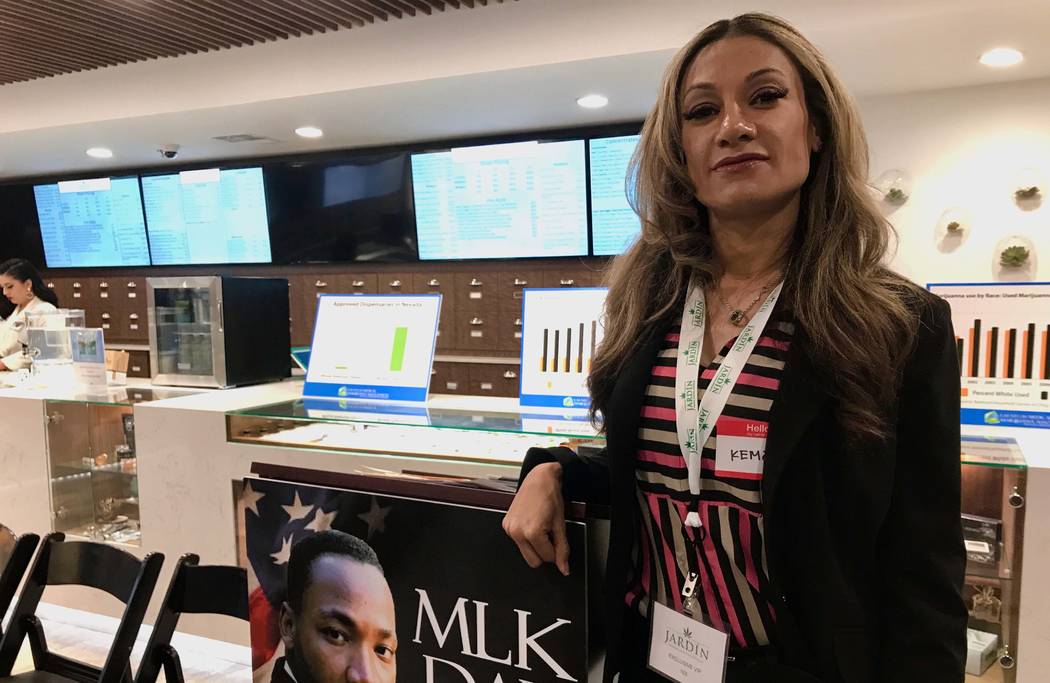 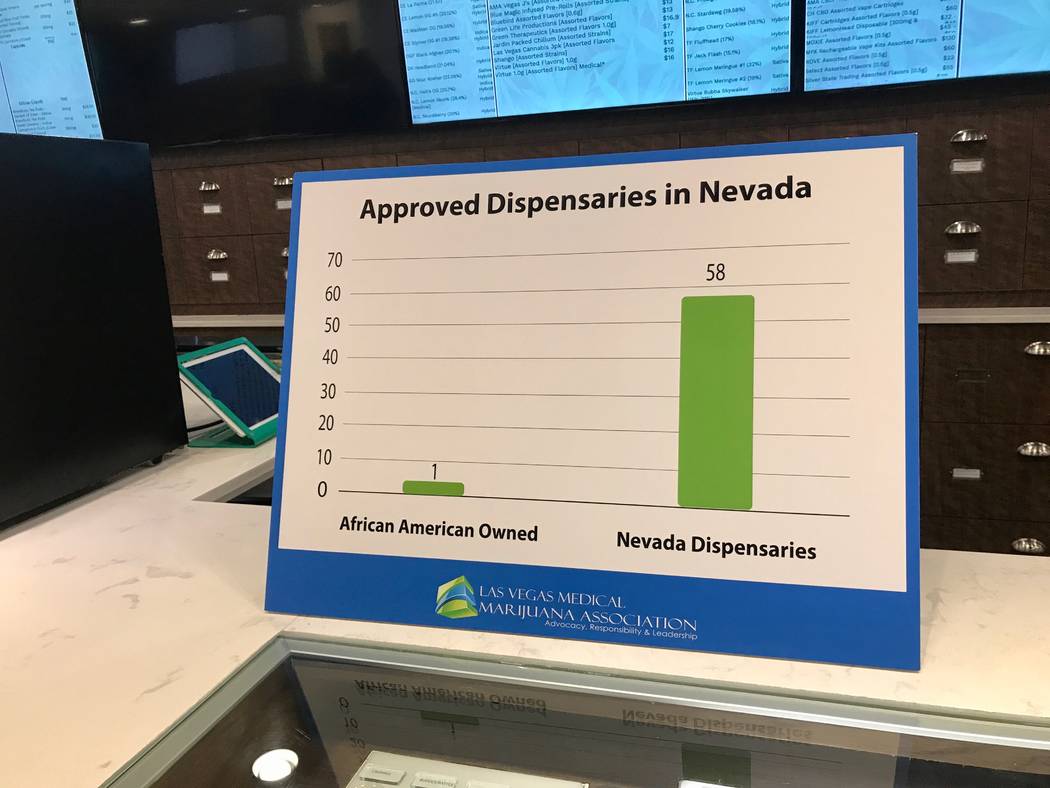 A display board shows that there is only one African America-owned dispensary out of 58 in Nevada. An event held at Jardin Dispensary in Las Vegas Jan. 12 focused on increasing involvement of minorities in the marijuana industry in Nevada.(Madelyn Reese/View) @MadelynGReese 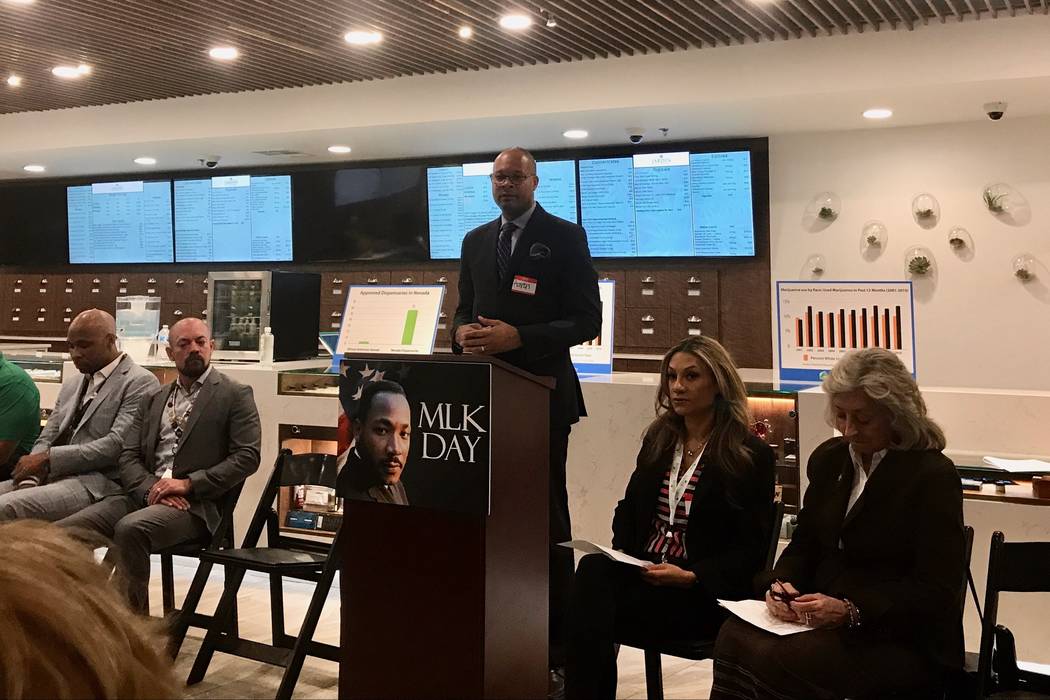 As recreational marijuana sales boom in Nevada, minorities are getting left out of the industry, activists say.

Of Nevada’s 58 dispensaries, one is African-American-owned, according to the Las Vegas Medical Marijuana Association. While about 47 percent of industry employees are minorities, said Kema Ogden of Top Notch THC, there is work to be done.

Marijuana use is nearly equal between black and white Americans (about 24 million Americans used marijuana last year), but black Americans are arrested nearly 3.5 times more for marijuana possession, according to the Brookings Institution. And marijuana convictions could prevent someone from obtaining a license to operate a dispensary.

Under Nevada law, the state can’t give licenses to anyone convicted of an “excluded felony,” which has different meanings for medical and recreational applicants, according to the state Department of Taxation, which oversees marijuana licenses.

An applicant for a medical license would be ineligible if convicted of a violent crime or a drug-related felony, including marijuana.

For retail applications, a person would be ineligible if convicted of the same felonies (violent or drug-related) or two felonies of any kind in Nevada. If the person has any conviction out of state that would be considered a violent or drug-related felony in Nevada, or two offenses in another state that would be considered a felony under Nevada law, that person also would be ineligible.

There are a couple ways to get around this: Under both laws, if the applicant completed their sentence more than ten years before they apply, the conviction would not count against them. Also, if a conviction was immune from prosecution in Nevada under medical marijuana laws – occurring before Oct. 1, 2001, for recreational and April 1, 2014, for medical – an applicant would still be eligible for a marijuana license.

So far, no one has been denied a license because of a drug-related conviction, department spokeswoman Stephanie Klapstein said.

There haven’t been many “red flags” among recreational applications, Klapstein said, because Nevada only accepts applications from those who already have medical dispensary licenses and already have been vetted.

That lasts until November, or 18 months from the start of legal recreational sales in the state, when anyone can submit an application. Applications will not be open on a rolling basis but instead during a fixed window of time. Klapstein said the official open date is yet to be determined.

The department considers applications on a case-by-case basis.

Assembly Bill 422, signed into law last year, directs the department to consider a list of factors in determining whether to award a medical marijuana license. Factors include including financial resources, educational achievements, knowledge and expertise of the industry and diversity of race, ethnicity or gender of the proposed owners, officers or board members.

The same applies if the department receives more applications for recreational licenses than it has to give, Klapstein said.

“I haven’t always been an advocate for legalized marijuana,” state Senate Majority Leader Aaron Ford told a small audience at the dispensary. Initially, Ford said, he believed the information he was told about marijuana being a gateway drug.

“What I wasn’t taught and what I didn’t learn until the 2013 legislative session … was that the initial criminalizing was based on racist premises in the first place,” he said.

Ford cited the United States’ increasing restrictions on marijuana in the early 1900s that occurred around the time of the Mexican Revolution, when many Mexicans immigrated to America to escape. Some smoked cannabis for medicinal or recreational purposes.

As xenophobia grew with the influx of immigrants, states began to criminalize marijuana until, by the 1930s, marijuana was regulated as a drug in every state.

“Then you get busted, and the rest of your life is ruined,” he said. “That doesn’t make you a bad kid.”

Now those friends can’t even think about owning a dispensary even though they might know more about the industry, Rhodes said.

Ogden, of Top Notch, identifies as a woman and a person of color. Whenever she has gone to marijuana-industry events, she said, “I was the only one that looked like me.”

Ogden agreed that reducing barriers for those with past marijuana convictions would be a positive step.

“I think it is definitely going to take some time, but having these conversations with state officials is very important,” she said. While there’s no law requiring the industry to be diverse, she continued, it’s something that people in the industry need to take initiative on.