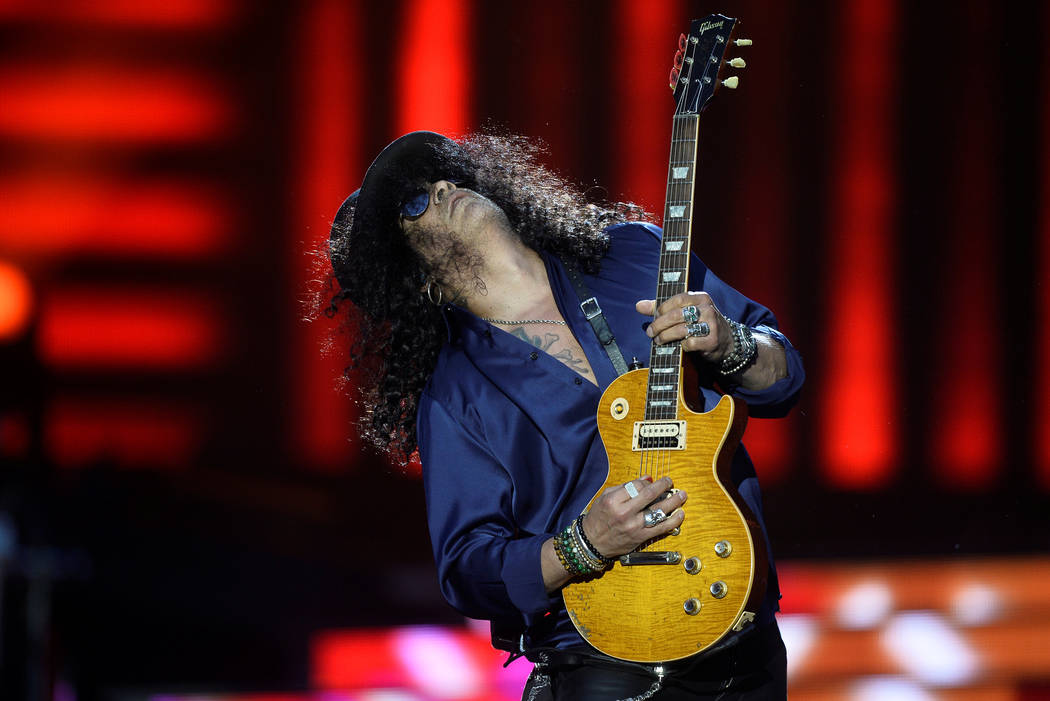 Slash, lead guitarist of U.S. rock band Guns N' Roses, performs on the first date of the European leg of the "Not in This Lifetime... Tour", at the San Mames football stadium in Bilbao, northern Spain, May 30, 2017. (Vincent West/Reuters) 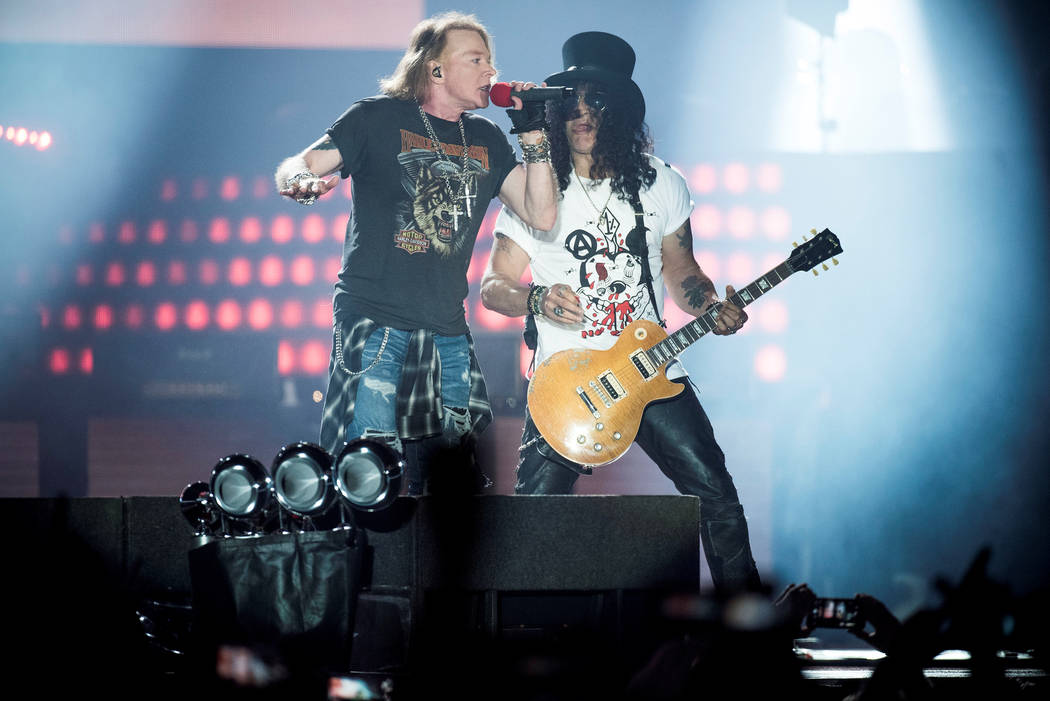 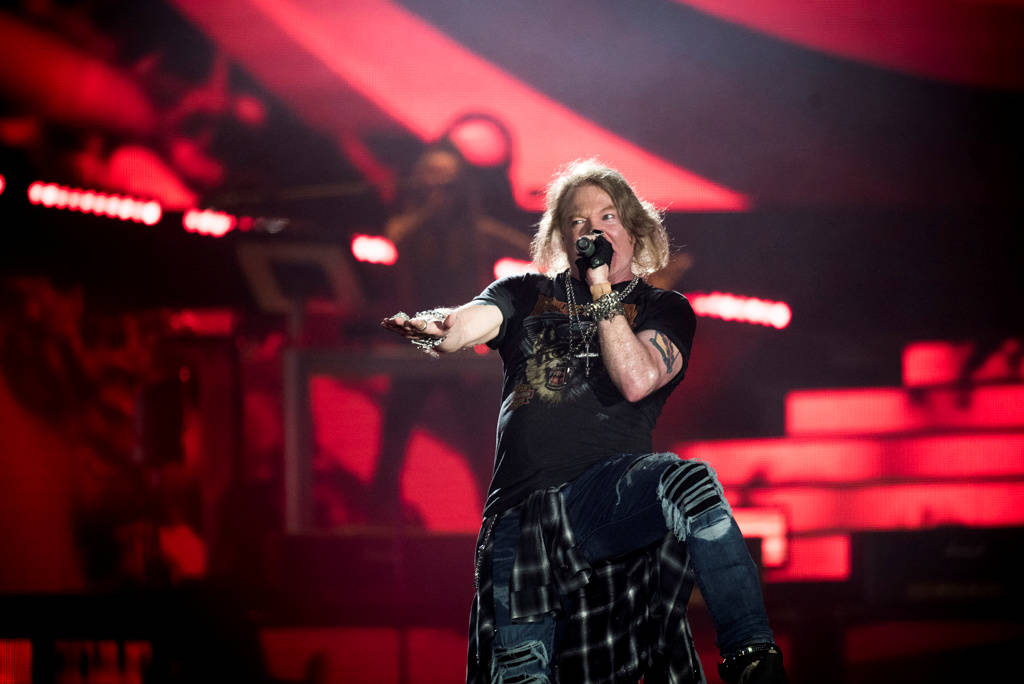 The song was prefaced by a word with as many definitions as the band singing it had guises.

“Illusion: Perception of something objectively existing in such a way as to cause misinterpretation of its actual nature.”

Said passage was one of many lines that flashed across T-Mobile Arena’s video screens Friday as Guns N’ Roses launched into “Estranged,” a brooding ballad propelled by an arcing, aching guitar line distilling the pain of the song’s protagonist.

The tune is from 1991’s “Use Your Illusion II,” an album with a title directly linking the song to its preceding citation.

But there were indirect connotations here, too: One could equate the above use of ‘illusion’ with the version of Guns N’ Roses that toured for over a decade beginning in the early aughts, when frontman Axl Rose was the only original member of the band.

Everything changed in April 2016, when Guns N’ Roses launched its current “Not in This Lifetime Tour,” which began in earnest in this very venue, reuniting Rose with bassist Duff McKagan and guitarist Slash from the band’s classic lineup.

These Gunners have been selling out stadiums and arenas ever since on what has become one of the biggest rock tours ever.

So, what’s different with the new, old Guns N’ Roses this go ’round?

Nowadays, menace comes with a smile.

A sly grin crept across Rose’s face as he delivered the snarling chorus to “Double Talkin’ Jive” over a locomotive guitar shuffle. His grin broadened widely upon the conclusion of “Live and Let Die,” as he held his mic stand aloft over his head, like a weightlifter gripping a barbell after a successful clean and jerk.

This was no small thing. In their late-’80s, early-’90s heyday, Guns N’ Roses became one of the world’s biggest hard rock acts, but seldom seemed to really enjoy themselves. The band’s well-documented struggles with substance abuse and internal acrimony frequently turned triumph into tumult.

Who knows whether that acrimony is truly past. Rose and Slash interacted little during the more-than-3½-hour show, except when Rose briefly placed his hand on Slash’s shoulder during “Knockin’ on Heaven’s Door” and “Better.”

Nevertheless, the Gunners showed glimmers of joy. Slash sometimes spun himself in giddy circles and McKagan beamed while belting out the Misfits’ “Attitude.”

And the chemistry was still there — it had to be, as the band seldom played these songs straight. Slash, in particular, took liberties on verbose, expressive solos for songs like “Rocket Queen” and “Prostitute.”

Rose, meanwhile, performed like a veteran athlete who knows that, because of the passing of time, he can no longer get by on physical feats alone.

So he picked his spots, singing portions of some songs, like “Better” and “Coma,” in a lower register, his voice thin and strained when trying to sustain his old upper-octave aplomb.

But Rose also knew when to go big, hitting the high notes out of the park on a standout “Nighttrain,” singing with gusto on a tight “My Michelle” and ably scaling the operatic peaks of “Madagascar.”

Back in the day, Guns N’ Roses was all about excess, danger, a willful disregard for anyone’s demands but their own.

These days, they show up on time, smile for the cameras, rock hard and call it a night.

They haven’t lost their edge, they’ve just used it to cut the crap.