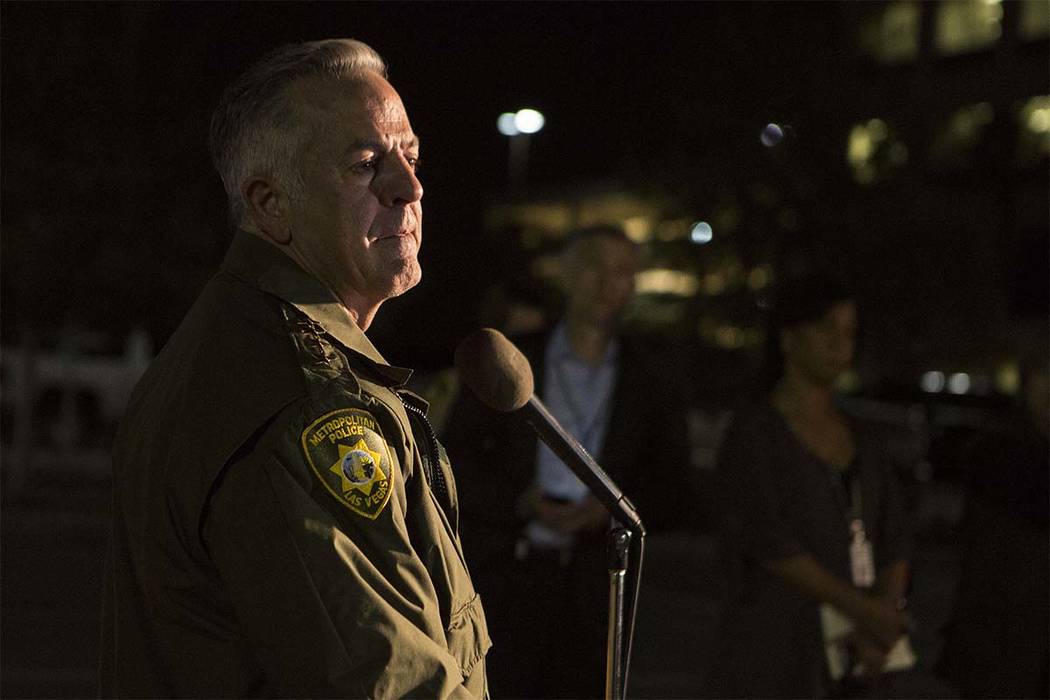 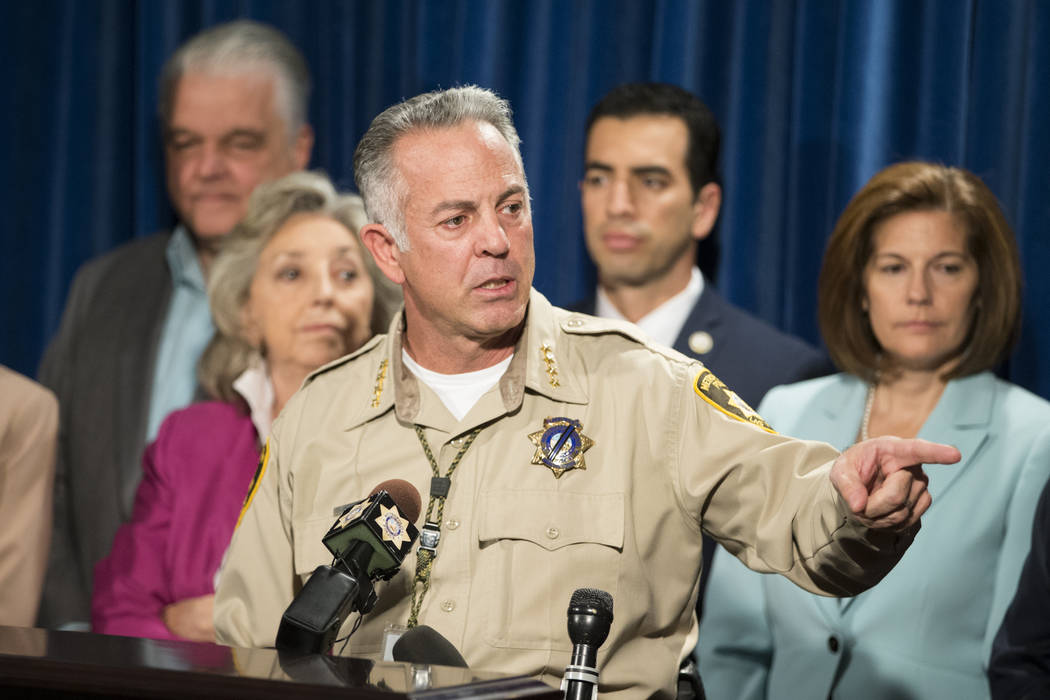 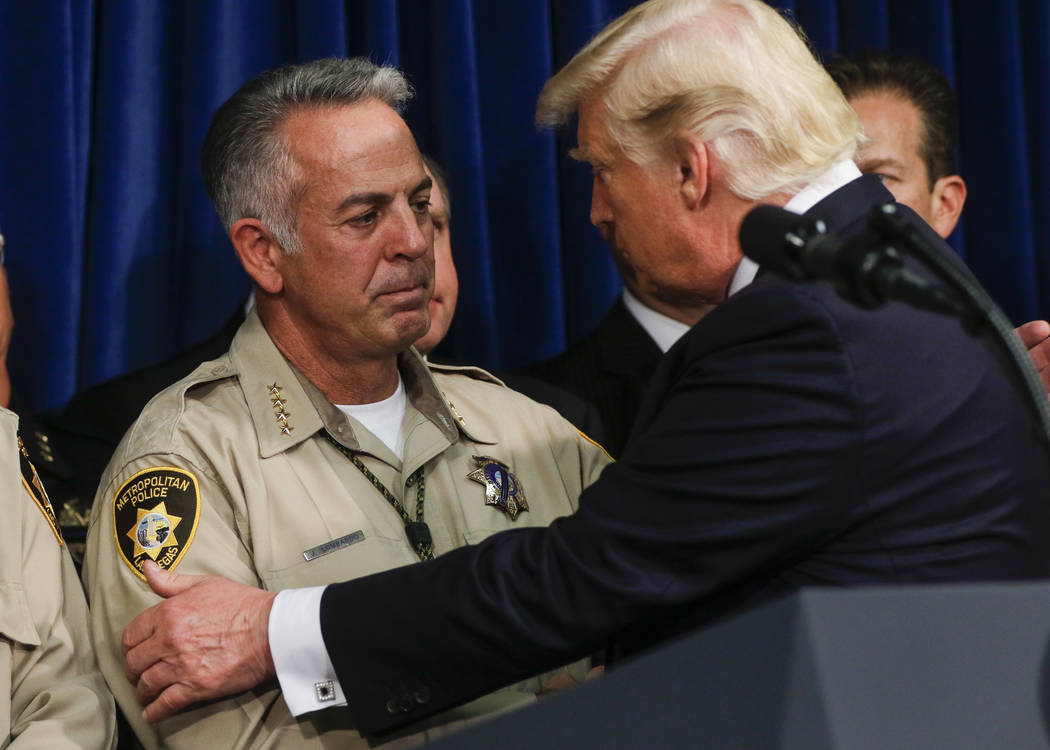 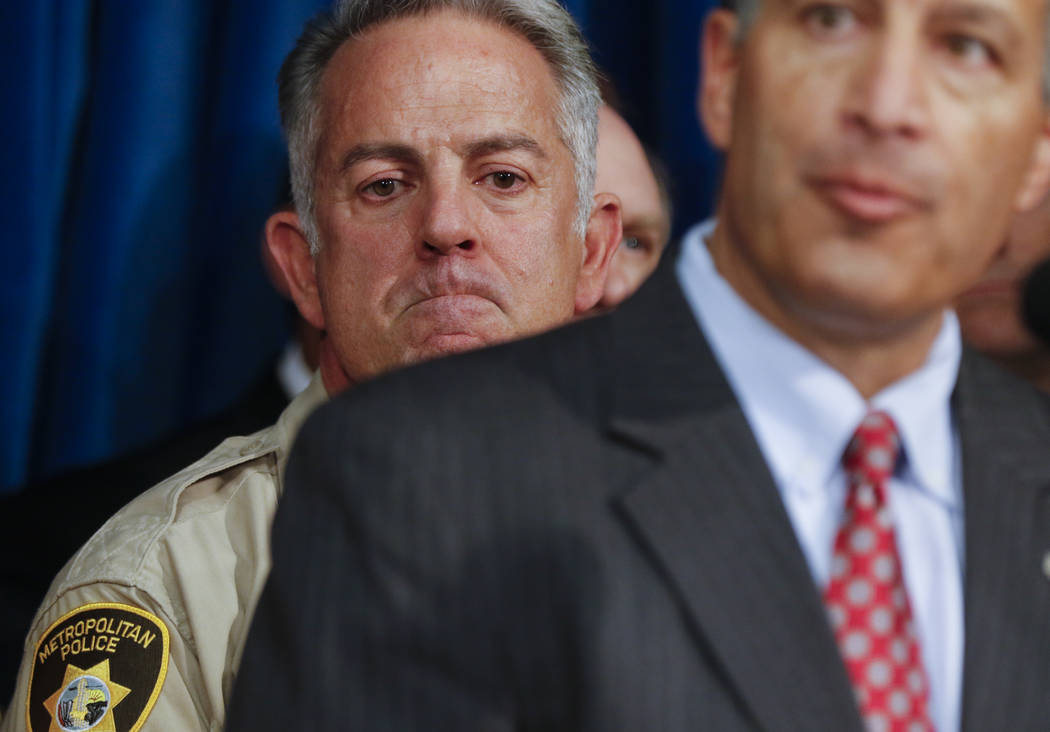 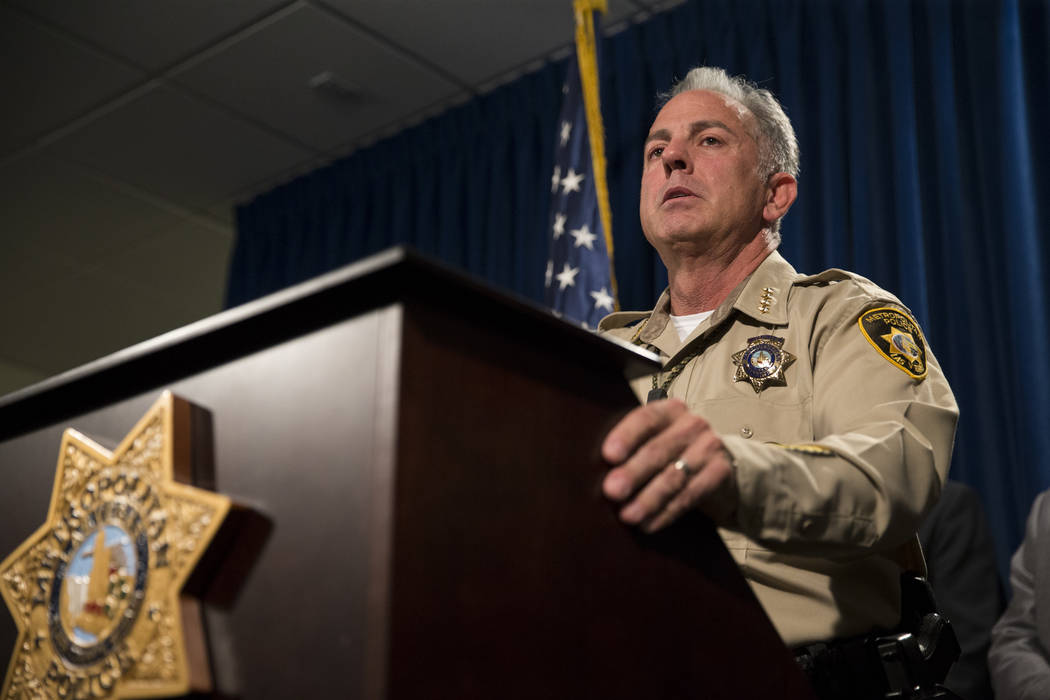 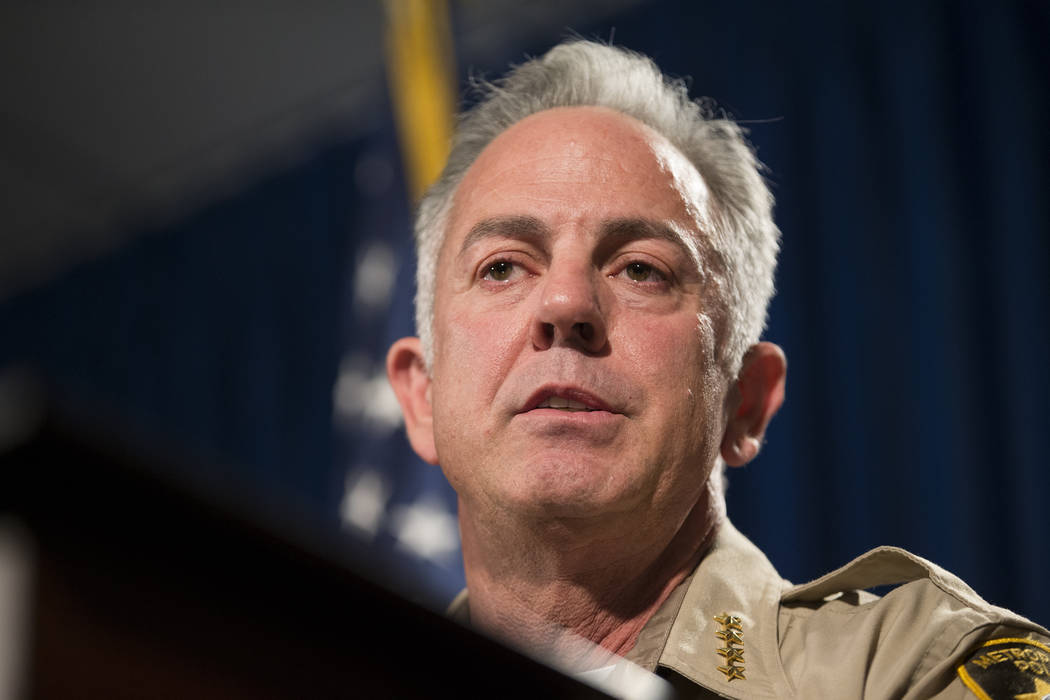 As thousands scattered from the cracks of gunfire over the Route 91 Harvest festival on Oct. 1, Clark County Sheriff Joe Lombardo was speeding down the Strip.

Minutes earlier, Lombardo was chatting with friends from back East over dinner at a steakhouse inside the Palazzo.

An active shooter at the Mandalay Bay had sent down a hail of bullets on the nearby country music festival crowd.

Lombardo bolted from the table and headed for the scene, past the festival grounds and the scores of people fleeing the terror.

The shooting had stopped by the time Lombardo arrived, and his commanders had the scene under control. The sheriff learned that two Metropolitan Police Department officers had been shot, and he raced to the hospital. Both would be fine, he would learn.

Hours later Lombardo would learn that off-duty officer Charleston Hartfield was also shot while attending the concert. The Henderson man was one of 58 people killed that night.

“It was a gut punch,” Lombardo said in an interview with the Las Vegas Review-Journal on Tuesday.

The events that night would register as the worst mass shooting in modern U.S. history. Stephen Paddock opened fire on a crowd of 22,000 people from his 32nd-floor suite at Mandalay Bay, killing 58 people and injuring nearly 500 others.

Lombardo’s response to the tragedy has drawn praise from law enforcement officials who have led their departments following mass shootings, and police experts who said his even-keeled demeanor in the wake of the tragedy helped keep a reeling community from panicking.

“It’s important for people to know what I know, when I know it. Just to calm the public,” Lombardo said.

For the self-described introvert who climbed the ranks of the Metropolitan Police Department, working in the spotlight has been anything but natural.

By 1:30 a.m. — just over three hours after the shooting — Lombardo was under the shine of news camera lights outside the department’s headquarters, his dress shirt from dinner showing under his forest-green police jacket as he relayed the first official details of the shooting.

His statements were concise and blunt. He would give four news briefings that day. And with each, he seemed more visibly exhausted by the weight of the investigation.

“I’m not comfortable with it. I didn’t ask for it, nor do I want it,” Lombardo said. “But I’m there, and hopefully I’m doing a good job.”

Several former Las Vegas police sheriffs did not respond to requests for comment, and the most recent former sheriff, Doug Gillespie, said he has made it a point since retiring in 2014 to refrain from speaking about Las Vegas police matters.

But Lombardo’s peers in other law enforcement agencies say he has handled himself well in the wake of tragedy.

“Nothing can really prepare you for something like this,” said John Mina, who is police chief in Orlando, Florida.

Mina’s department oversaw the response to the Pulse nightclub massacre, in which 49 people were killed and 53 injured last year. The June 12, 2016, shooting was then the worst mass shooting in modern U.S. history.

Jarrod Burguan, the police chief in San Bernardino, California, said it’s important for the face of the investigation to be reassuring and make the public feel like things are under control.

“The folks in the community really look to you,” he said.

In December 2015, Burguan headed the police response when two people opened fire on a Christmas party at a San Bernardino County government building. Fourteen people were killed; 22 others were injured.

“You have this responsibility of managing the investigation and making sure it gets done right,” Burguan said last week. “But you also have the responsibility to take care of your community, to make sure they are calm, and reassured.”

“And I thought he (Lombardo) did a pretty good job at that,” Burguan added.

The national spotlight also brings intensified scrutiny. And a recent change to the timeline of events has directed pointed criticism at Lombardo and Metro.

On Monday, a full week after the shooting, Lombardo revised some key details of the investigation. He noted that Jesus Campos, the Mandalay Bay security guard who was shot in the leg while checking on an open-door alarm on the 32nd floor, was the first person shot by Paddock that night, some six minutes before the shooter opened fire on the concert crowd. Lombardo initially said Campos was shot after Paddock unleashed the fatal barrage.

Fox News personality Tucker Carlson said during his show Wednesday that the revised timeline “doesn’t seem to make any sense at all” and questioned why the public should believe police going forward.

“This shakes the public’s faith in anything the investigators say,” Carlson said.

But changes in details are inevitable in an investigation of this magnitude, former Aurora Police Chief Dan Oates said. Oates, now the chief of police in Miami Beach, Florida, headed the police response when a shooter killed 12 people and injured 70 others at a movie theater in Aurora, Colorado.

“Given the scale and complexity, as a police professional, I’m not particularly troubled if some early facts shift,” Oates said.

It wasn’t until Oct. 3, the Tuesday morning after the shooting, that Lombardo walked the grounds of the Route 91 Harvest festival. Even 36 hours later, grisly reminders of the carnage remained.

“There were still bodies,” Lombardo said.

That same morning, the sheriff walked past the roughly 200 bullet holes that riddled the 32nd-floor hallway, evidence of when Paddock fired at Campos.

Lombardo saw the cache of assault rifles and high-capacity ammo clips stacked up on the floor of the suite and the body of the shooter with a bullet wound to his head.

But with experience leading Metro’s search-and-rescue team and its homeland security division, Lombardo has developed some emotional calluses that have helped him push through.

“Thirty years in the business, you tend to get numb and drive on. You know it will eventually slow down for you,” Lombardo said. “I think it’s important for me to bite my lip and grin and bear through it.”

By the time of the Oct. 4 news conference, Lombardo was fiery, even combative with the media as he criticized questions that asked him to speculate about the details of the shooting.

He didn’t sleep much in the week after the shooting, partly because of the sheer amount of work that needed to be done. A constant thought clawed at his mind when he tried to get some rest.

The only sleep he got in those first few days would come on what he called the “nasty little couch” in his office at police headquarters near downtown Las Vegas.

“I finally got some substantial sleep last night,” Lombardo said Tuesday, more than a week after the shooting.

By Tuesday’s interview with the Review-Journal editorial board, Lombardo seemed collected and refreshed.

But something still eats at him: What motivated the shooter to unleash such terror?

“You immediately think you’re gonna know the reasons why in the short term. Now, here we are a week after the fact, and we still don’t know,” the frustrated Lombardo said as he shook his head, clearly unsettled by the lack of information.

He knows how important those answers are to not only his investigators, but also to the victims and everyone affected by the massacre.

“I think there needs to be some closure for myself, for the Police Department and the public.”