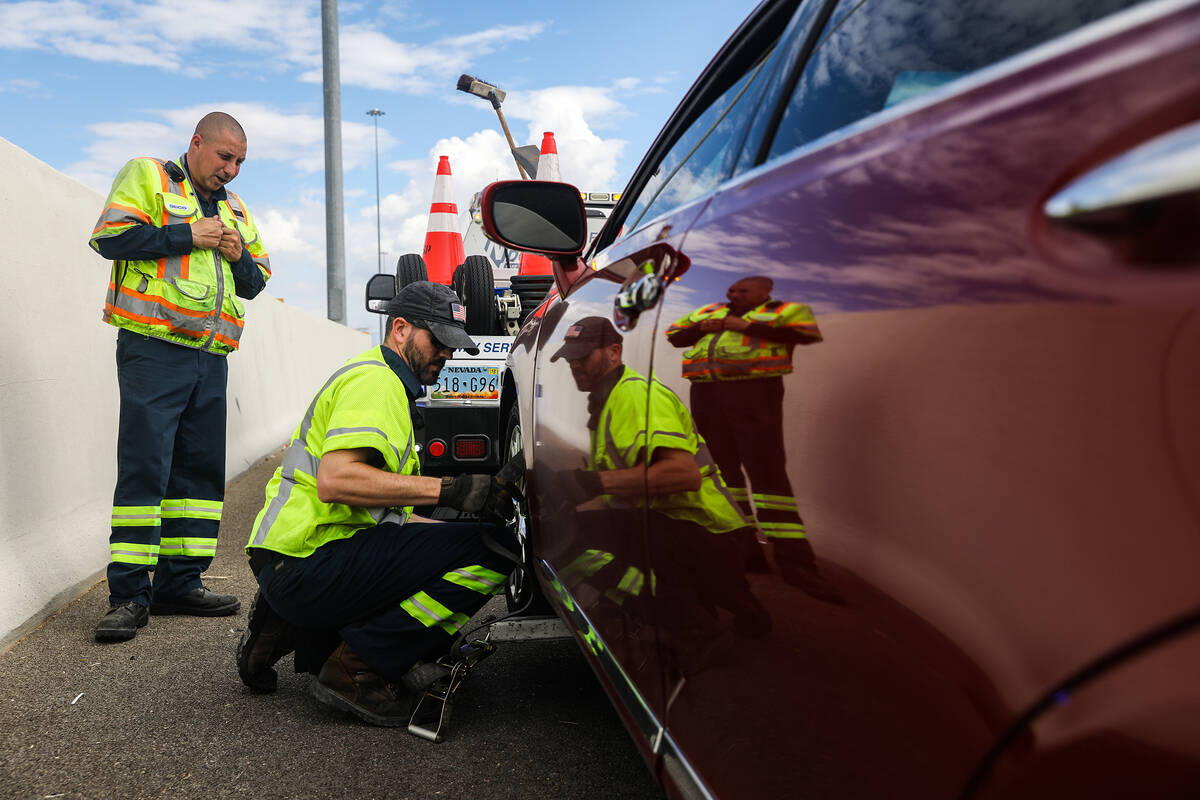 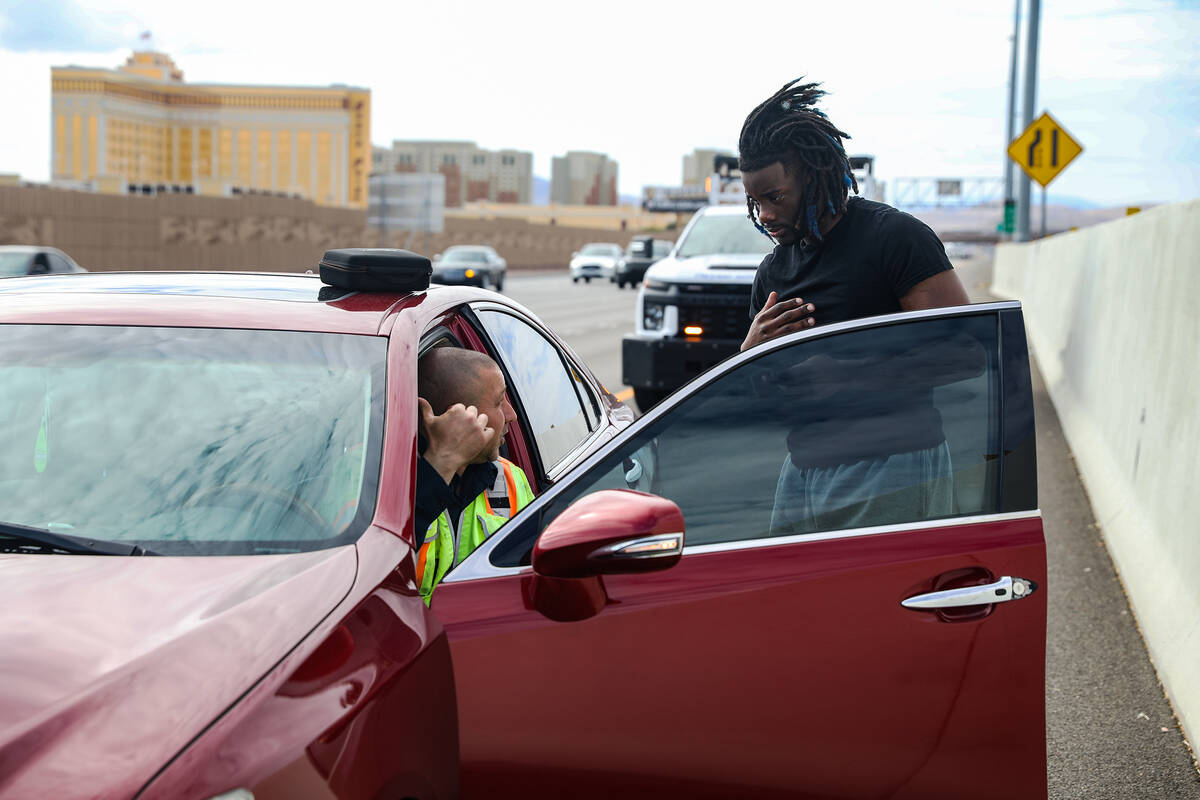 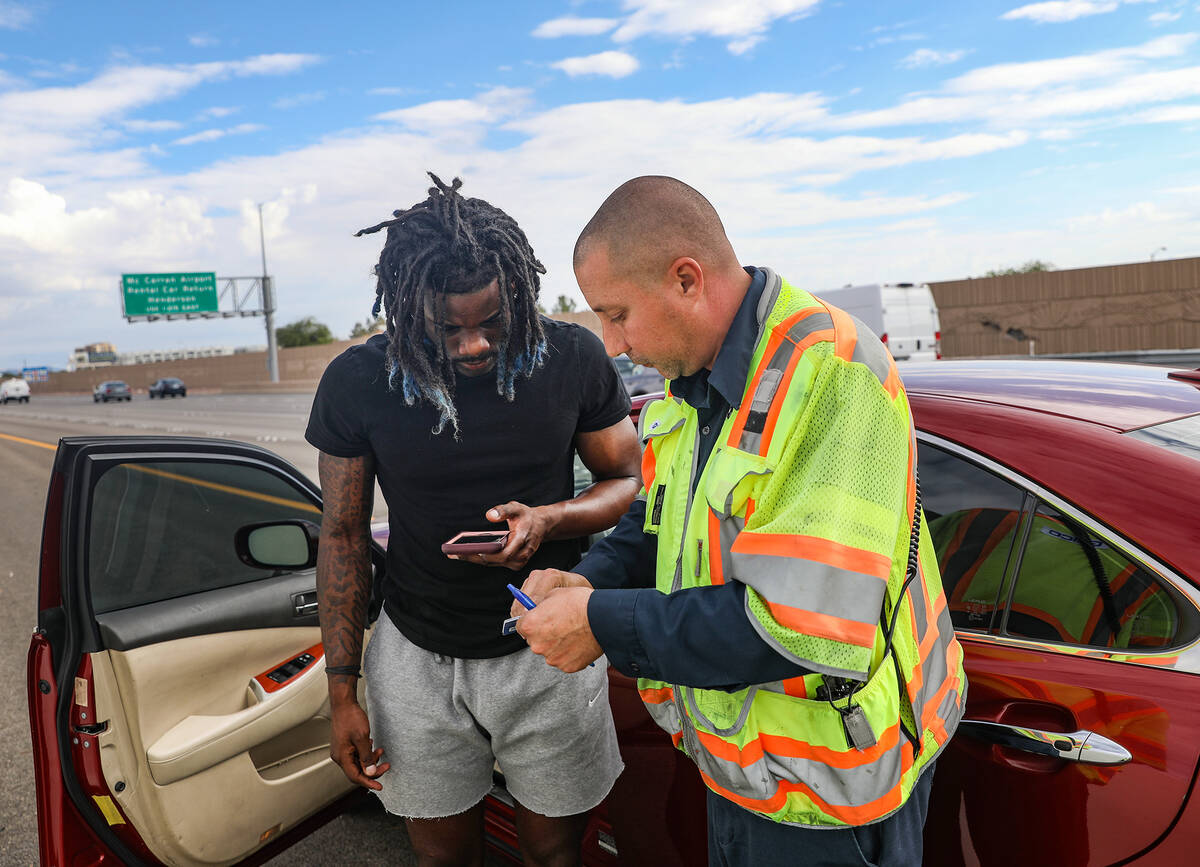 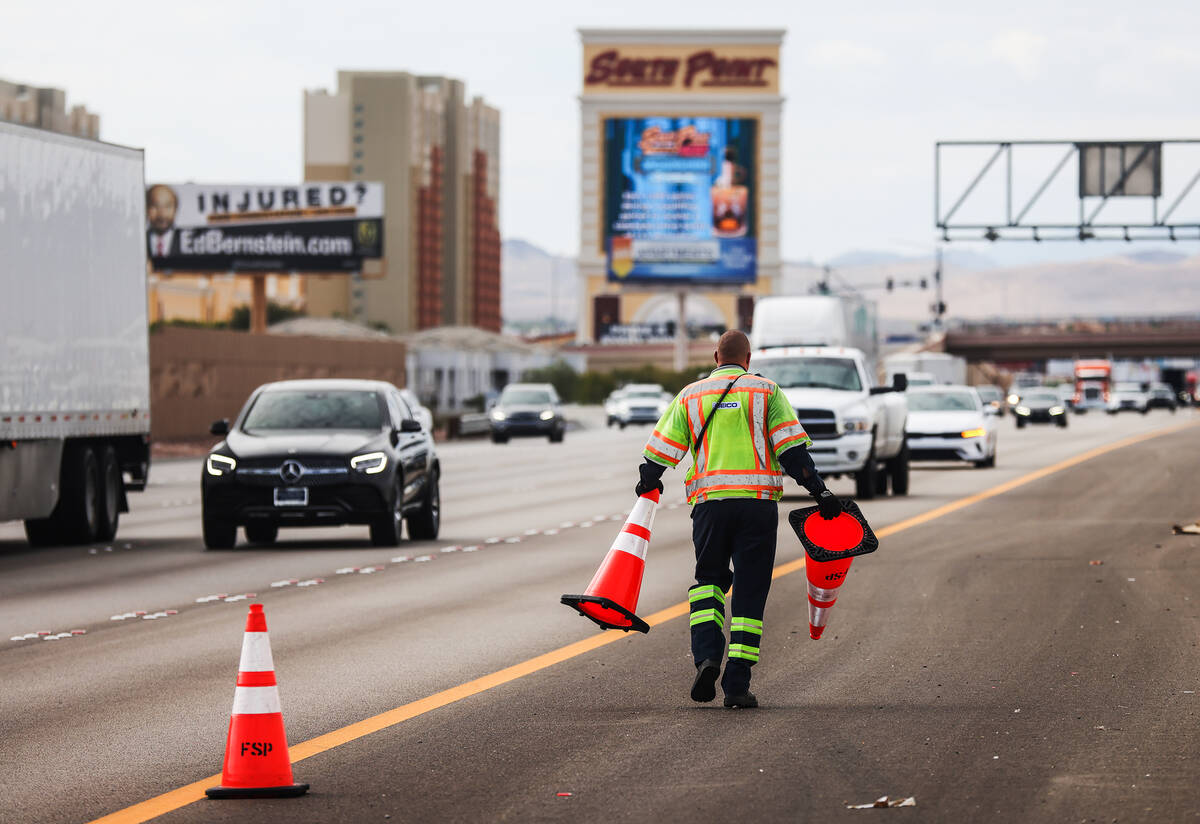 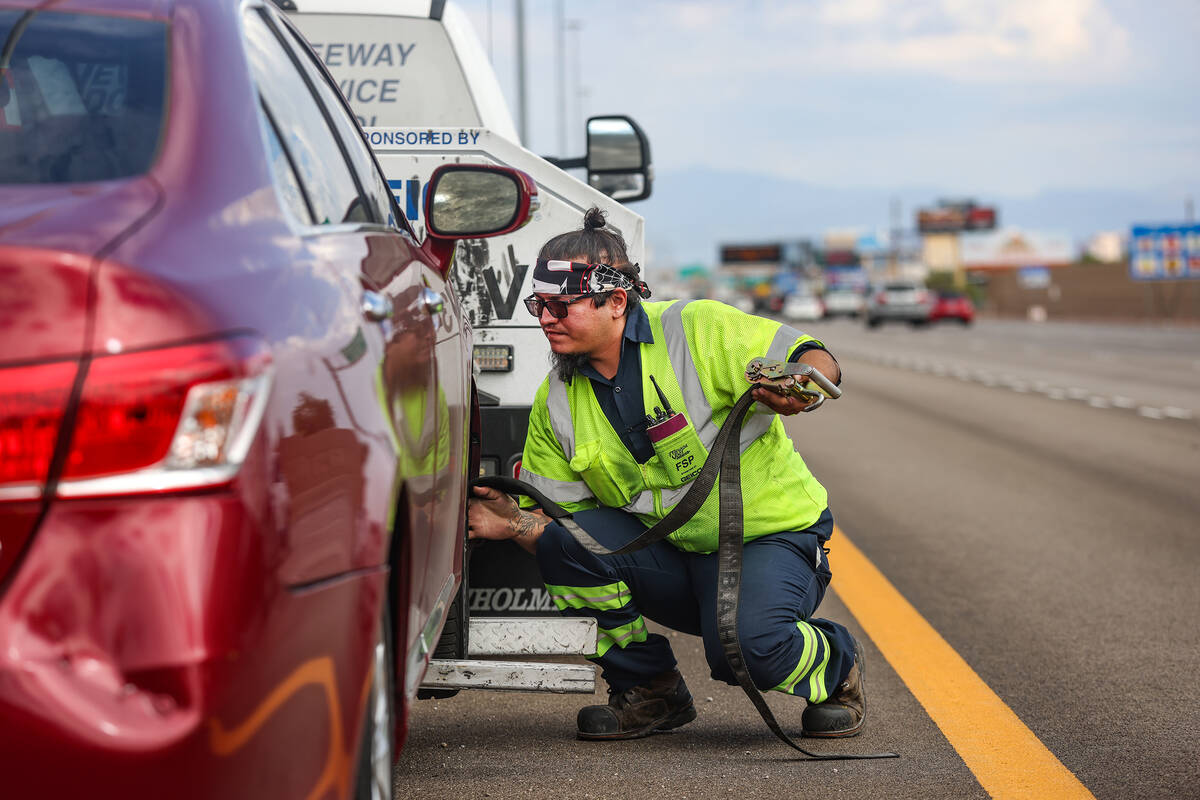 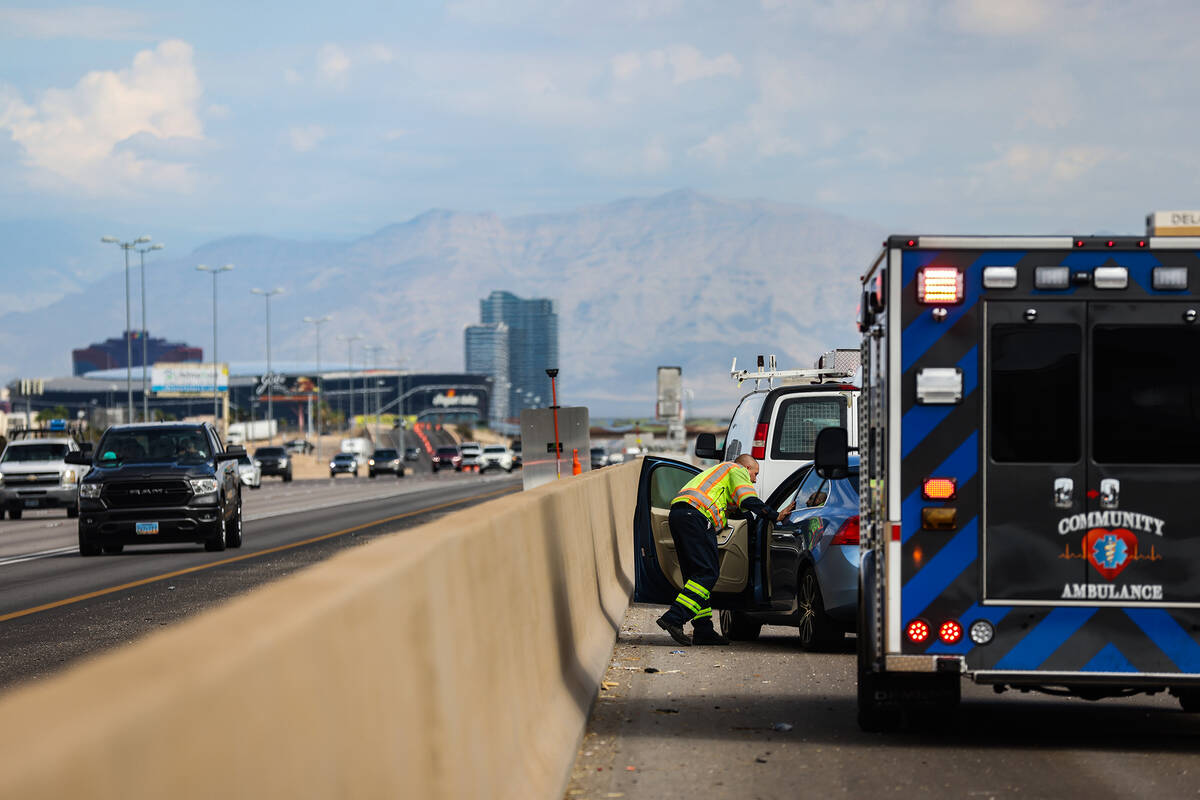 Stephen San Filippo, a supervisor Freeway Service Patrol operator, checks on passengers who were just in a car crash on the I-15 in Las Vegas, Tuesday, Sept. 13, 2022. (Rachel Aston/Las Vegas Review-Journal) @rookie__rae 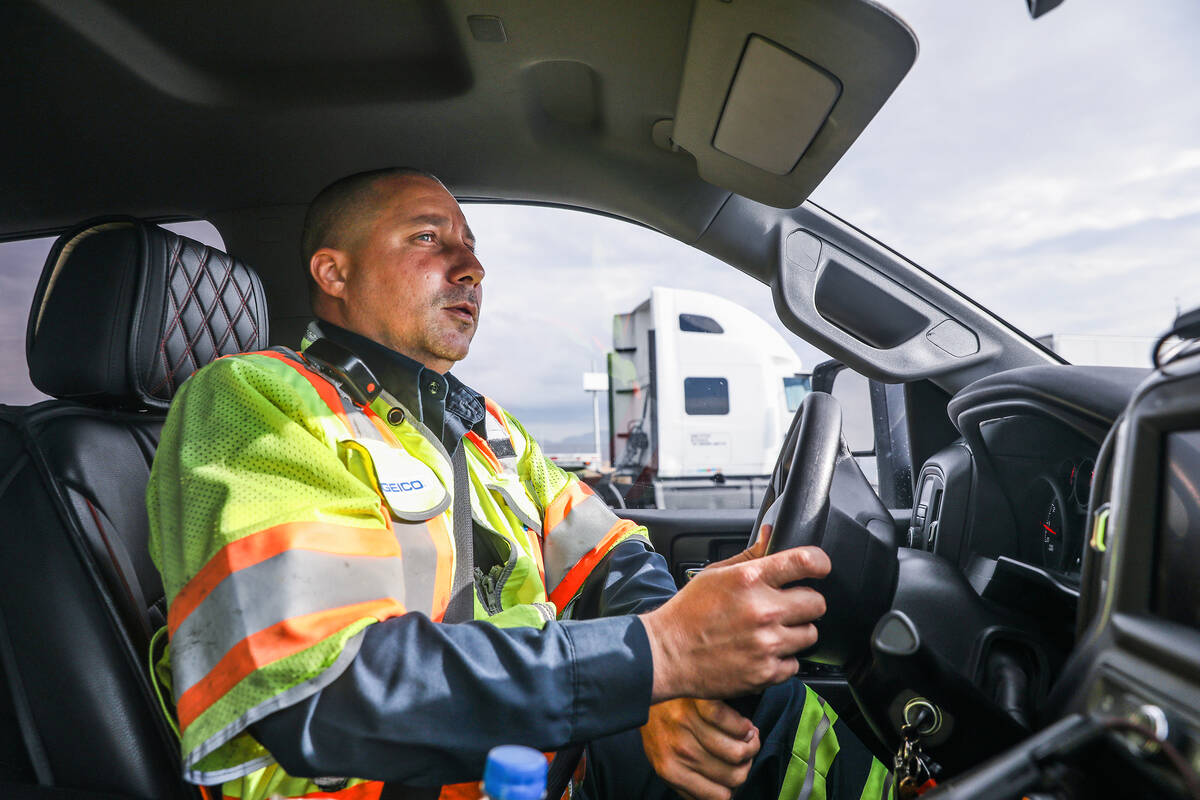 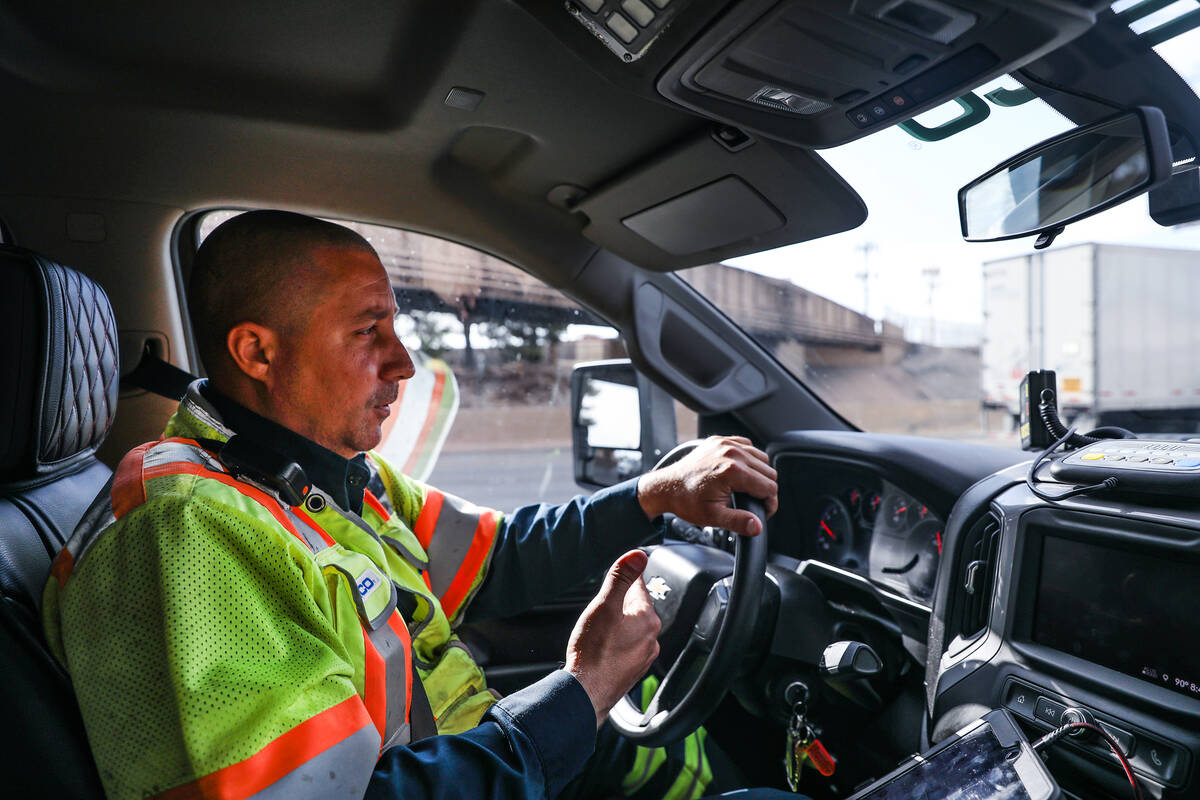 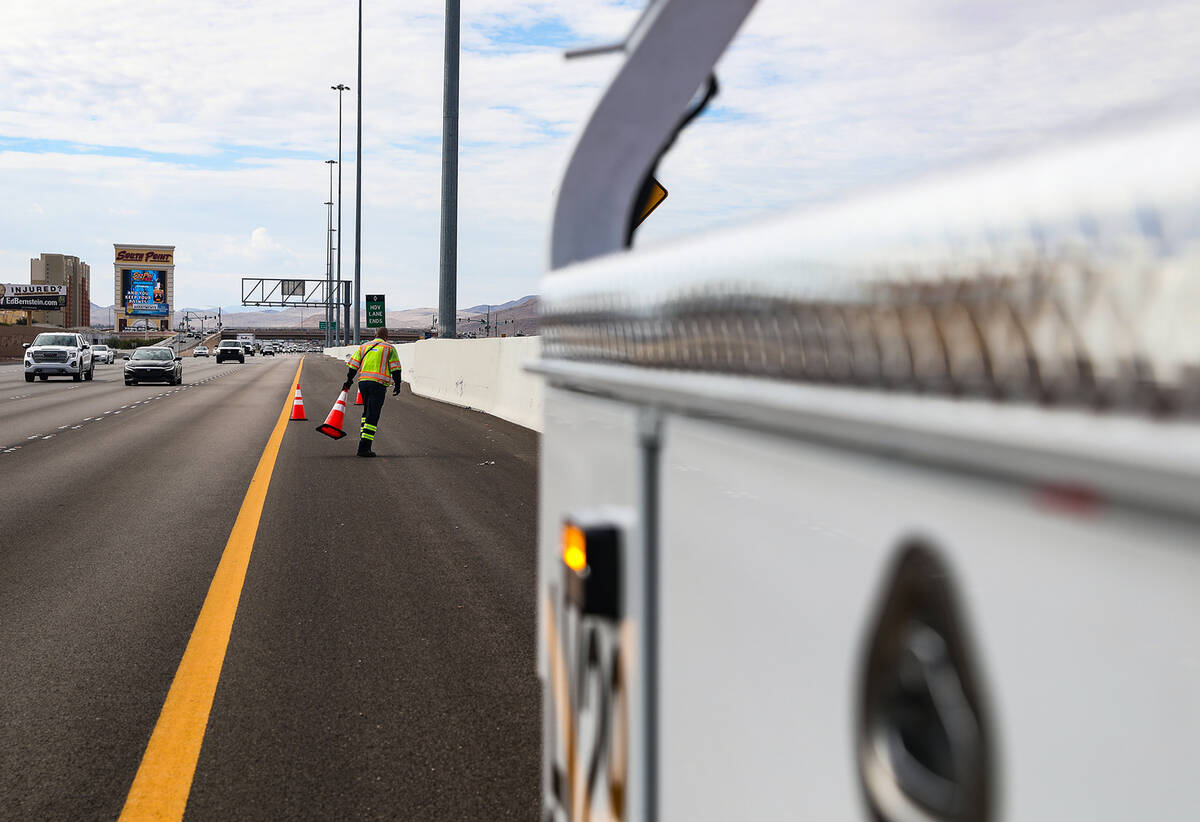 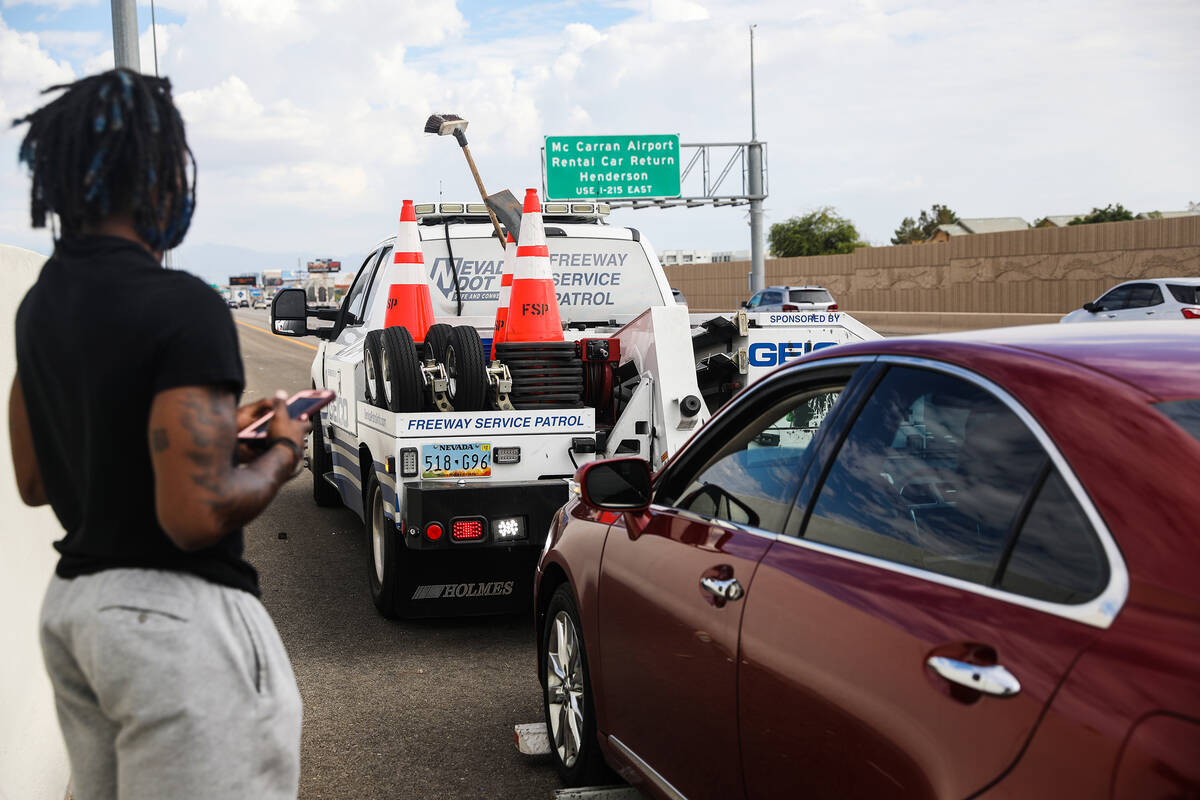 Jonathan Braggs looks on as his broken car is towed on the I-15 in Las Vegas, Tuesday, Sept. 13, 2022. (Rachel Aston/Las Vegas Review-Journal) @rookie__rae 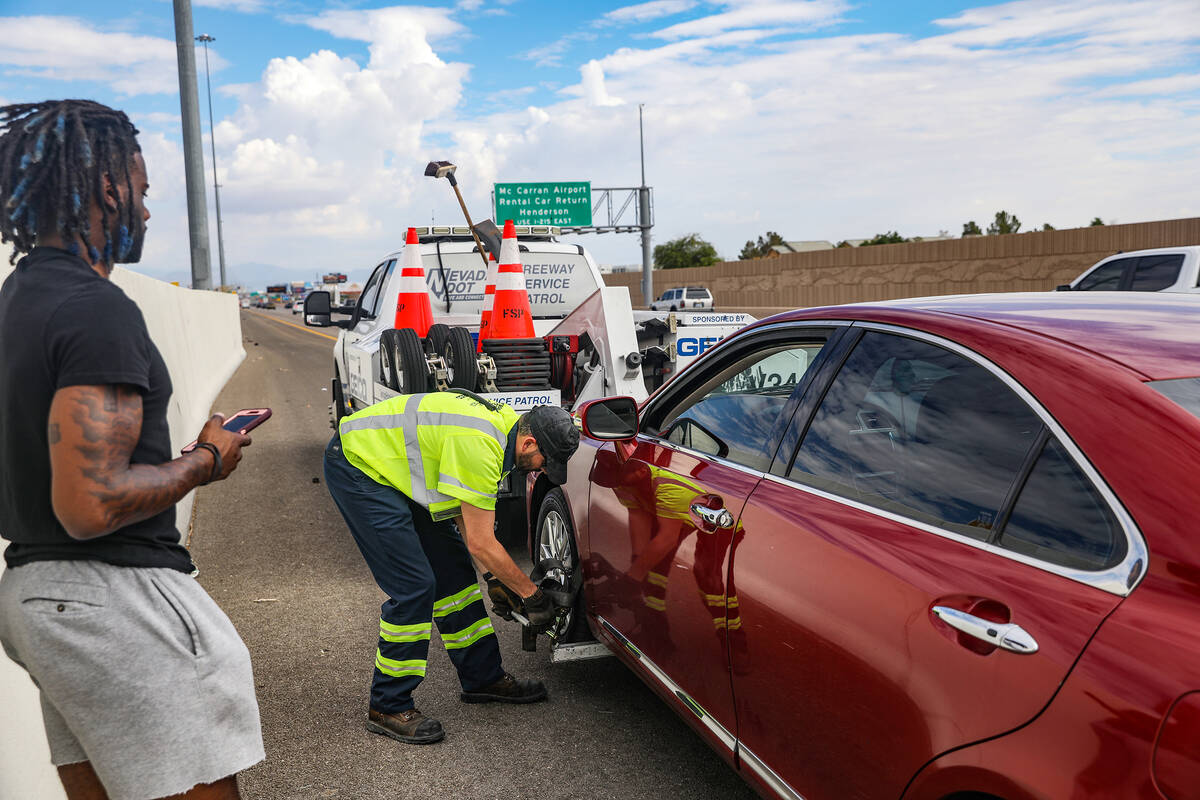 Jonathan Braggs looks on as Tim Stankovich, a FSP operator, prepares his car to be towed on the I-15 in Las Vegas, Tuesday, Sept. 13, 2022. (Rachel Aston/Las Vegas Review-Journal) @rookie__rae 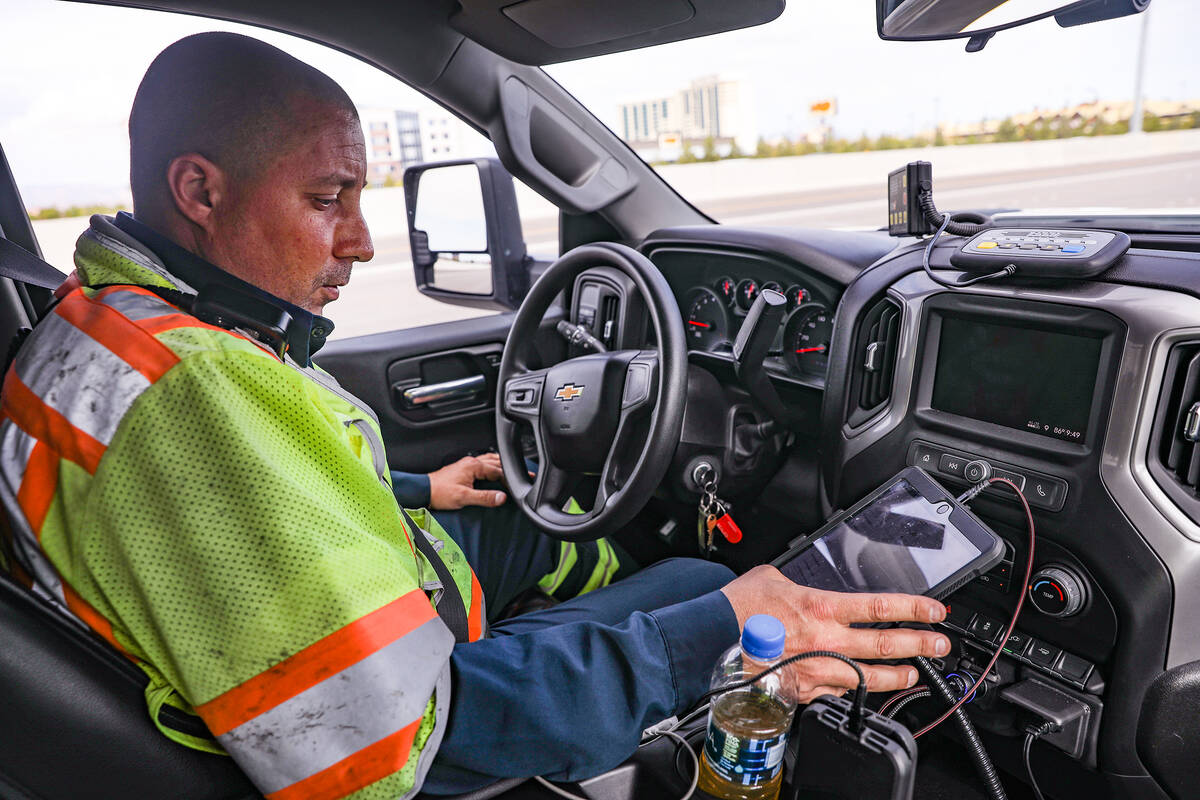 A supervisor for the Nevada Department of Transportation’s Freeway Service Patrol rolled up behind a crash on the left shoulder of southbound Interstate 15. He’s the first one at the scene.

Stephen San Filippo got out of his truck to check on the occupants of two vehicles — a car and a van. Nevada State Police and medical services arrived at the scene as San Filippo evaluated if both could be driven off the road and avoid becoming another abandoned car.

“Number one thing, check on the motorists to make sure they’re OK,” he said. “But you have to establish your scene by blocking lanes to establish scene safety.”

Neither the car driver nor the passenger is believed to have suffered major injuries in the crash, but both vehicles had to be towed.

The number of abandoned vehicles and motorists stuck on the side of the road goes up in the scorching summer months in Las Vegas. American Automobile Association said it sees an increase of about 25 percent in service calls in the brutal weather.

It’s a much more demanding time for San Filippo.

As supervisor, he’s had to pick up extra hours to help with clearing roadways in the summer and aid with a current staffing shortage, according to NDOT.

“It could be up to like three to four times more,” San Filippo said. “It’s to the point where I’ve had days where it’s nonstop.”

San Filippo said he had started to see more people running their cars to the last drop on the freeway and getting stuck in the travel lane. He said it’s been frustrating to see this so often because, even with the higher gas costs than in previous years, it is almost never as expensive as citations that can cost hundreds of dollars.

“We did see an increase in calls from last summer to this summer, but we don’t attribute it to high gas prices,” he said. “We think a sharp increase of calls is due to driving getting back to pre-pandemic numbers.”

Primary reasons for AAA calls in the summer are dead batteries, overheated cars and blown tires, he said.

At this point in the year, the harsh summer season is over, according to Treanor. The next few months should be easier on Nevada cars.

“Our time really is dictated by the weather,” said Treanor, “but typically around Memorial Day it starts and ends around Labor Day.”

Car batteries have a shorter lifespan in the desert than most other places, Treanor said. AAA reports that batteries in cooler climates can last longer than five years, but in hot climates, they usually last closer to three years.

Treanor also advised against overinflating car tires. Heat expands tires, which can burst them if they are already over-inflated.

Too hot to be stuck without a plan

Neglect of a car is a common reason a car gets abandoned on the side of the road, according to San Filippo.

“I’d say it’s 50-50 on the vehicle and the motorist driving because there’s a lot of negligence going on,” San Filippo said. “Lot of them are out of fuel, no [motor] oil. It’s like they rode it to death.”

San Filippo advised motorists to always check tire tread and pressure, top off all fluids and take their vehicles to a trusted service mechanic for an inspection.

For San Filippo, patrolling the freeways and helping those in need gives him a certain satisfaction.