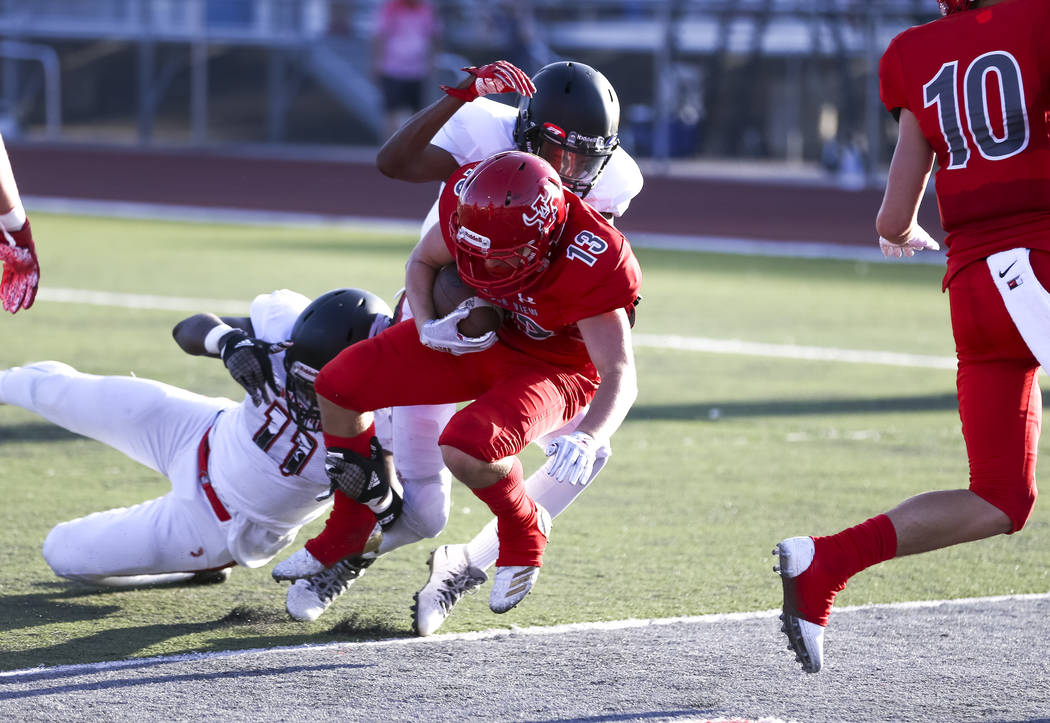 Arbor View Aggies running back/safety Justin Hausner (13) runs the ball into the end zone for a two-point conversion during the first half of a varsity football game against the Valley View Eagles at Arbor View High School in Las Vegas on Friday, Aug. 17, 2018. Richard Brian Las Vegas Review-Journal @vegasphotograph

Always an intense rivalry between Henderson squads, the Falcons are the area’s last undefeated team in Class 4A and will put that unbeaten mark on the line against the Wolves.

A much-awaited matchup in the Northwest League. Faith Lutheran has won its first two league contests after a 1-3 start, while Arbor View has sprinted to a 6-1 record and a No. 2 ranking.

A rematch of the 2017 Class 3A state title game. It will be Desert Pines’ first game since a pair of forfeits for a fight against Liberty.

The Trojans knocked off Sunset League favorite Cheyenne in Week 7, and will look to establish themselves as the league’s top team.

First place in the Sunrise League is on the line when the Pirates, ranked No. 1 in Class 3A, travel to face the Eagles.

It’s the last week of the regular season, and the last chance for anyone in the league to knock off Coronado. Keep an eye on Tech, which has come closest this year.

It’s a matchup between schools better known for their boys basketball rivalry, but the boys soccer game shouldn’t be too shabby either. The Chargers are hanging tight with the Gaels in the standings and are looking for a home playoff game.

Will anyone beat the Panthers? Palo Verde is nationally ranked and the Jaguars will play host, riding high after a big win against Eldorado last week.

The Crusaders are looking to make moves in the Mountain League, and a road win over the Bengals would go a long way in doing that.

A fun Desert League matchup that wouldn’t have existed last year when the two schools were in opposite leagues, the Diamondbacks look to take down the Gators.

It’s still early in the 3A league schedule, but the Miners have impressed early and will look to cement themselves atop the Sunrise League.

The defending state champion Mustangs and the Crusaders both are undefeated in Mountain League play with roughly a month left in the regular season.

The Gaels and Cougars both qualified for the Class 4A state tournament last season and are undefeated in Desert League play this fall.