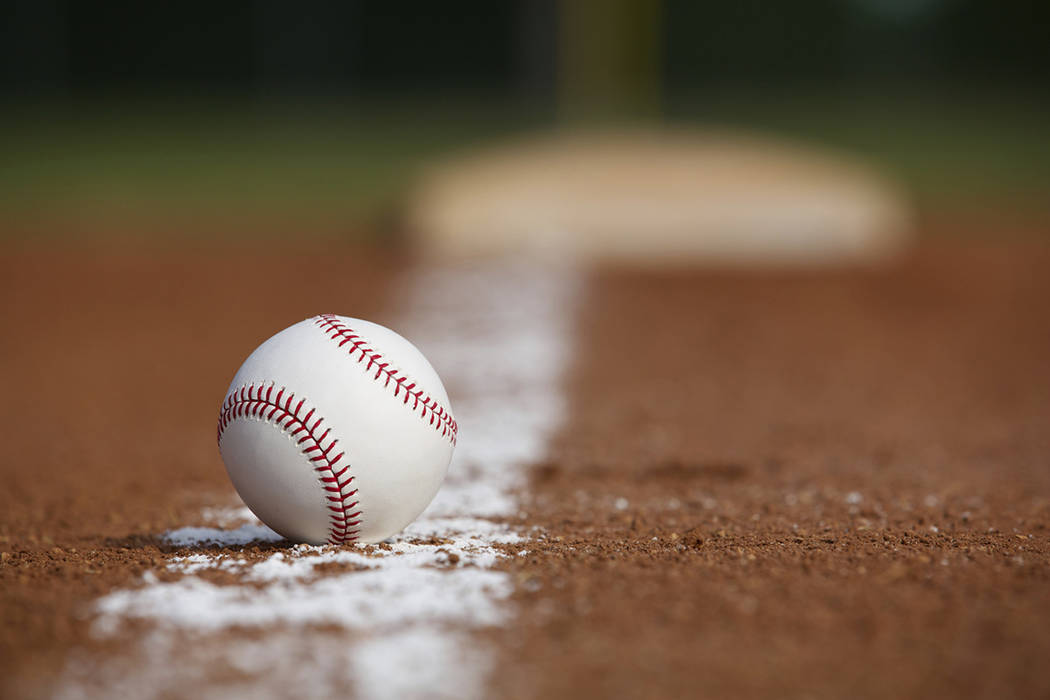 Jake Riding tossed a five-inning no-hitter Tuesday to lead Pahrump Valley’s baseball team to an 11-0 win over Legacy in the Blazer Spring Bash at Shadow Ridge.

Basic 5, San Fernando (Calif.) 4 — At Durango, Trace Evans’ squeeze bunt in the top of the sixth inning plated Zach Hose with the go-ahead run as the Wolves edged the Tigers.

Matt Dodd was 3-for-4 with a double for San Fernando.

Basic 20, Centennial (Calif.) 0 — At Durango, Zach Hose was 2-for-3 with two doubles and four RBIs to help the Wolves rout the Golden Hawks in three innings.

Demetrius Vigil was 2-for-4 with three RBIs, and John Howard Bobo was 2-for-2 with a double and two RBIs for Basic.

Hunter Katschke tossed a one-hitter for the Wolves.

Foothill 17, Verdugo Hills (Calif.) 4 — At Las Vegas High, Steve Murray was 3-for-4 with a double and four RBIs to help the Falcons rout the Dons in five innings.

Ethan Yatson was 3-for-4 with a triple and an RBI, and Jake Perales went 2-for-3 with a double and four RBIs for Foothill. Shawn Whelan was 2-for-2 with two RBis for the Falcons.

Foothill 6, Sylmar (Calif.) 5 — At Las Vegas High, Kelton Lachelt went 1-for-4 with a double and two RBIs, and the Falcons scored three runs in the bottom of the sixth to rally past the Spartans.

Tommy Dirk was 1-for-2 with a double and an RBI for Foothill.

Durango 14, Locke (Calif.) 2 — At Durango, Chase Ludwick tossed a five-inning one-hitter to guide the Trailblazers by the Saints.

Chase Watkins was 2-for-2 with a double, two runs and an RBI for Durango.

Arbor View 12, Garfield (Calif.) 1 — At Centennial, Garrett Cutting went 3-for-4 with two triples and three RBIs to help the Aggies to a five-inning win over the Bulldogs.

Nick Cornman was 2-for-4 with a double and two RBIs, and Niles Scafati-Boyce went 2-for-2 with an RBI for Arbor View.

Brennan Holligan and Aaron Collins combined on a two-hitter for the Aggies.

Arbor View 10, Banning (Calif.) 2 — At Centennial, Scafati-Boyce was 2-for-4 with two RBIs to help the Aggies down the Pilots.

Brad Stone was 2-for-4 with a double for Arbor View.

Centennial 4, Banning (Calif.) 0 — At Centennial, Zachary Hare tossed a two-hitter with six strikeouts and two walks to lead the Bulldogs by the Pilots.

Travis Rice was 2-for-3 with two RBIs for Centennial.

Faith Lutheran 11, Moapa Valley 4 — At Cimarron-Memorial, Aiden Martin went 2-for-4 with a double, two runs and three RBIs, and the Crusaders used two five-run innings to down the Pirates.

Carson Bonus was 2-for-3 with a double and an RBI, and Dylan Howell was 2-for-4 with an RBI for Faith Lutheran, which got a home run from Parker Sylvester.

Kobe Evans was 2-for-3 with an RBI, and Rylan Evans went 2-for-4 with a double for Moapa Valley.

Birmingham (Calif.) 7, Faith Lutheran 3 — At Cimarron, Alex Ballesteros went 3-for-3 with two doubles and two runs to help the Patriots down the Crusaders.

Dylan Schafer was 2-for-3 with a double and a run, and K.J. Moo-Young was 1-for-1 with an RBI for Faith Lutheran.

Rancho 5, Boulder City 1 — At Sierra Vista, Jairo Verdugo was 2-for-4 with a home run, a triple, two runs and three RBIs to guide the Rams by the Eagles.

Shelby Richards was 2-for-3 for Rancho.

Matthew Felsenfeld was 3-for-3, and Clark Newby went 2-for-4 for Boulder City.

Verdugo went 2-for-4 with an RBI for Rancho.

Spring Valley 4, Poly (Calif.) 2 — At Bonanza, Kade Higgins went 2-for-3 with a triple, a double, a run and an RBI as the Grizzlies defeated the Parrots.

Chase Rodriguez was 1-for-2 with a double and an run for Spring Valley, which had just three hits.

Granada Hills (Calif.) 4, Spring Valley 2 — At Bonanza, Andrew Fishman’s single with no outs in the top of the seventh inning plated Brandon Garfinkel with the go-ahead run as the Highlanders edged the Grizzlies.

Erik Dulittle was 2-for-3 with an RBI, and Higgins went 2-for-4 for Spring Valley.