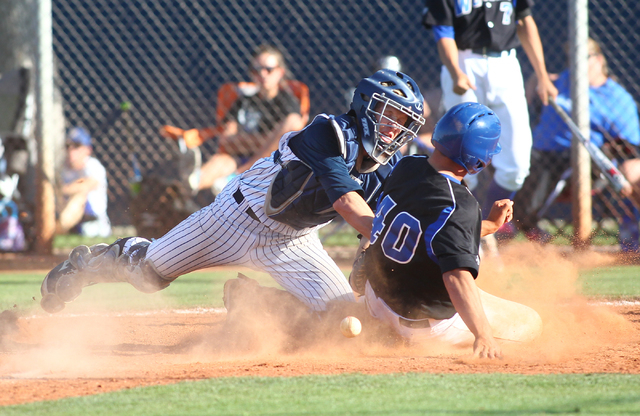 Basic’s Isaac Perez (40) slides into home plate as Chatsworth catcher Jake Ryan loses control of the ball during the sixth inning in the championship game of the Blazer Spring Bash. Basic tied the game at 3-3 on the play, but Chatsworth rallied for two runs in the seventh for a 5-3. win (Chase Stevens/Las Vegas Review-Journal) 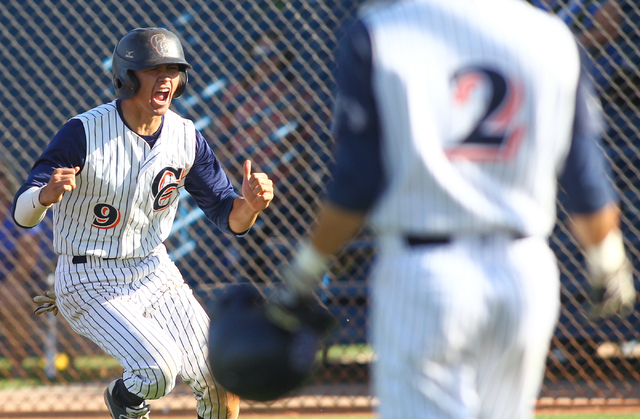 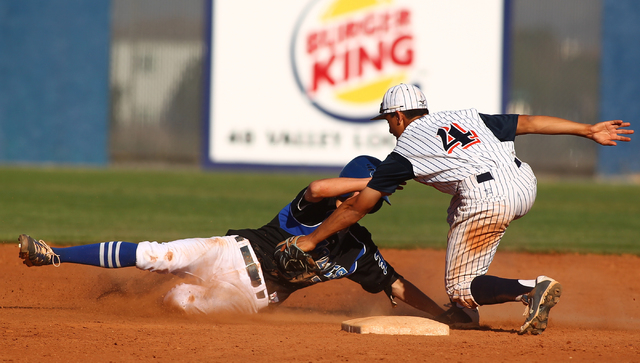 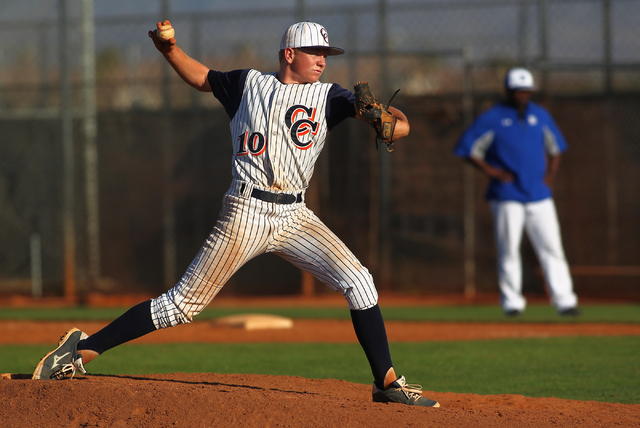 Chatsworth’s Niko Switalla (10) fires a pitch against Basic during the seventh inning in the championship game of the Blazer Spring Bash. Switalla threw a five-hitter, and Chatsworth won 5-3. (Chase Stevens/Las Vegas Review-Journal) 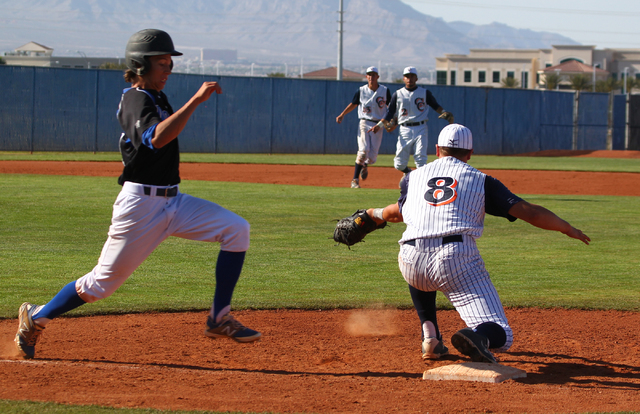 Basic’s Mikey York (7) is forced out at first base by Chatsworth’s Anthony Mayorga (8) during the fourth inning in the championship game of the Blazer Spring Bash. Chatsworth won 5-3. (Chase Stevens/Las Vegas Review-Journal) 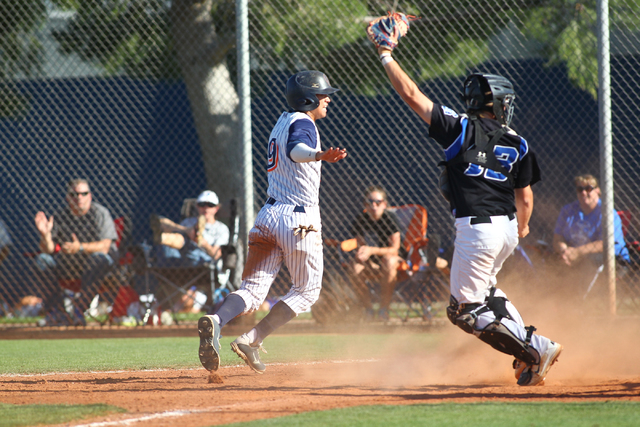 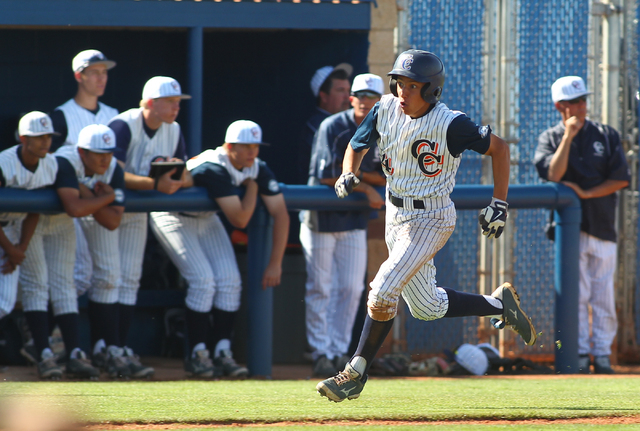 Chatsworth’s Garrett Kueber (4) runs for home plate to score in the first inning against Basic in the championship game of the Blazer Spring Bash. Chatsworth won 5-3. (Chase Stevens/Las Vegas Review-Journal) 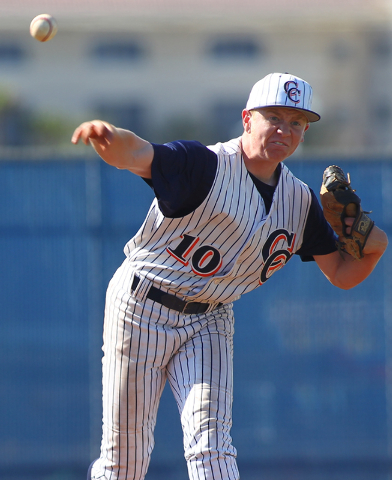 Chatsworth’s Niko Switalla (10) throws the ball to second base in the first inning against Basic in the championship game of the Blazer Spring Bash. Chatsworth won 5-3. (Chase Stevens/Las Vegas Review-Journal) 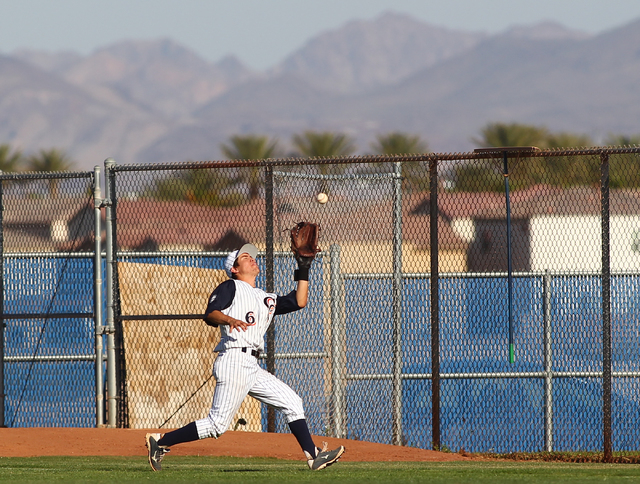 Chatsworth’s Micah Ortiz (6) reaches to catch a fly ball against Basic during the sixth inning in the championship game of the Blazer Spring Bash. Chatsworth won 5-3. (Chase Stevens/Las Vegas Review-Journal) 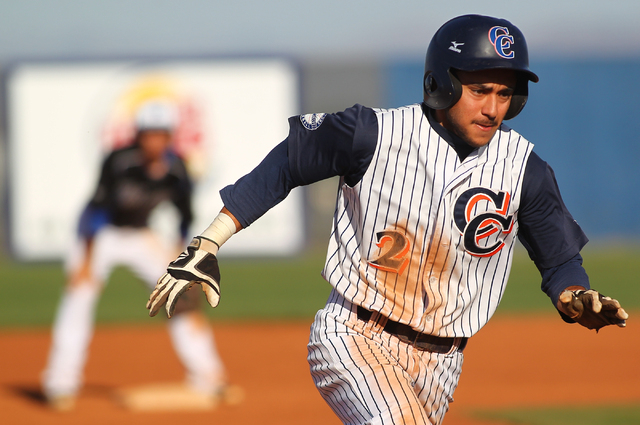 Chatsworth’s Michael Baregamyan (2) runs for third base while playing against Basic during the seventh inning in the championship game of the Blazer Spring Bash. Baregamyan scored the go-ahead run, and Chatsworth won 5-3. (Chase Stevens/Las Vegas Review-Journal) 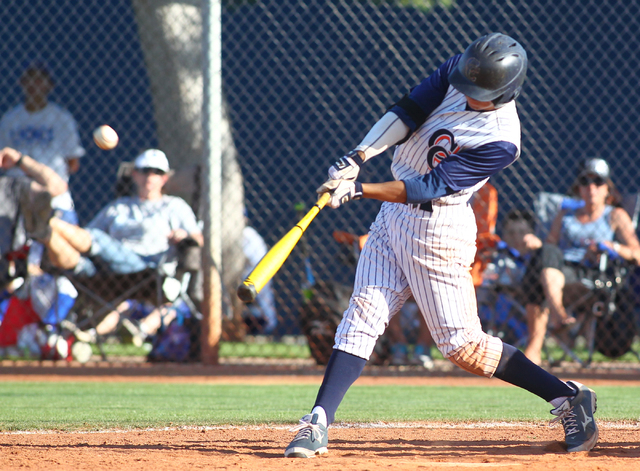 It wasn’t the outcome that Basic’s baseball team had hoped for.

But the Wolves shouldn’t focus just on their 5-3 loss to Chatsworth (Calif.) on Wednesday in the championship game of Sierra Vista bracket of the Blazer Spring Bash. Coach Scott Baker thinks that just making it to the title game shows that the team might be ready to win bigger games down the line.

Chatsworth scored two runs in the top of the seventh to down Basic. With one out, Michael Baregamyan walked, and Micah Ortiz hit a soft liner to left.

Logan Green fielded the ball in the outfield and quickly fired to third baseman Isaac Perez, who made a diving tag to try to get Baregamyan. The umpire ruled Baregamyan safe, and Perez was ejected for arguing the call.

Garrett Kueber then lined an RBI single to center to break a 3-3 tie, and the Chancellors added a run on a sacrifice fly.

The seventh wasn’t the first time controversy seeped into the game. Basic led 2-1 entering the sixth, but Chatsworth tied the score on an RBI single by Thomas Palomera. Then with two outs and an 0-2 count on the batter, Chatsworth’s Riley Conlan stole home to give his team a 3-2 advantage.

The pitch was close to the strike zone, and Baker came out to argue that the batter moved up in the box to interfere with the catcher attempting to make the tag, but the play stood.

Basic tied the score in the bottom of the sixth when Perez doubled with one out and went to third when Jeryd Reuss misplayed the ball in the outfield.

Ryne Nelson then hit a grounder to short, and Perez slid in safely when the catcher couldn’t hang onto the throw and complete the tag.

Nelson allowed four earned runs on five hits in seven innings for Basic, giving the Wolves another quality performance on the mound.

“We’ve been throwing the ball real well,” Baker said. “They’ve bought into the philosophy for sure of throw strikes and if you get hit, you get hit. And they’re doing a real good job of that right now.”

Basic 7, Faith Lutheran 3 — At Sierra Vista, Perez was 3-for-3 with a double and two RBIs to lead the Wolves over the Crusaders in a semifinal.

Justin Daraban and Chad Jones each went 2-for-3 with an RBI for Faith Lutheran.

Chatsworth (Calif.) 10, Sierra Vista 2 — At Sierra Vista, the Chancellors scored seven runs after two were out in the top of the first en route to the semifinal win.

Sierra Vista’s Caeden Marin went 2-for-4 with a double and a run, and Alex Kern and Dylan White each went 1-for-3 with an RBI for the Lions.

Isaiah Blaylock was 1-for-3 with a double and two RBIs, and Jakob Chambers was 2-for-4 for Shadow Ridge. Tyler Burton was 1-for-2 and scored two runs for the Mustangs.

Desert Oasis 3, Banning (Calif.) 1 — At Sierra Vista, Tyler Kitrel’s pinch-hit, two-run triple with two outs in the bottom of the sixth inning broke a 1-1 tie and lifted the Diamondbacks past Banning.

Bryson Stott had an RBI single in the sixth and scored the go-ahead run on Kitrel’s hit.

Chris Van Kuren tossed a five-hitter and struck out six for Desert Oasis.

Poly (Calif.) 15, Durango 5 — At Durango, the Parrots took advantage of 11 walks and six errors to down the Trailblazers.

Artie Gallegos was 2-for-5 with two triples and two RBIs for Durango.

Durango 7, Arleta (Cailf.) 0 — At Durango, the Trailblazers won by forfeit.

San Fernando (Calif.) 16, Moapa Valley 0 — At Las Vegas, the Tigers scored 12 runs in the fifth to rout the Pirates.