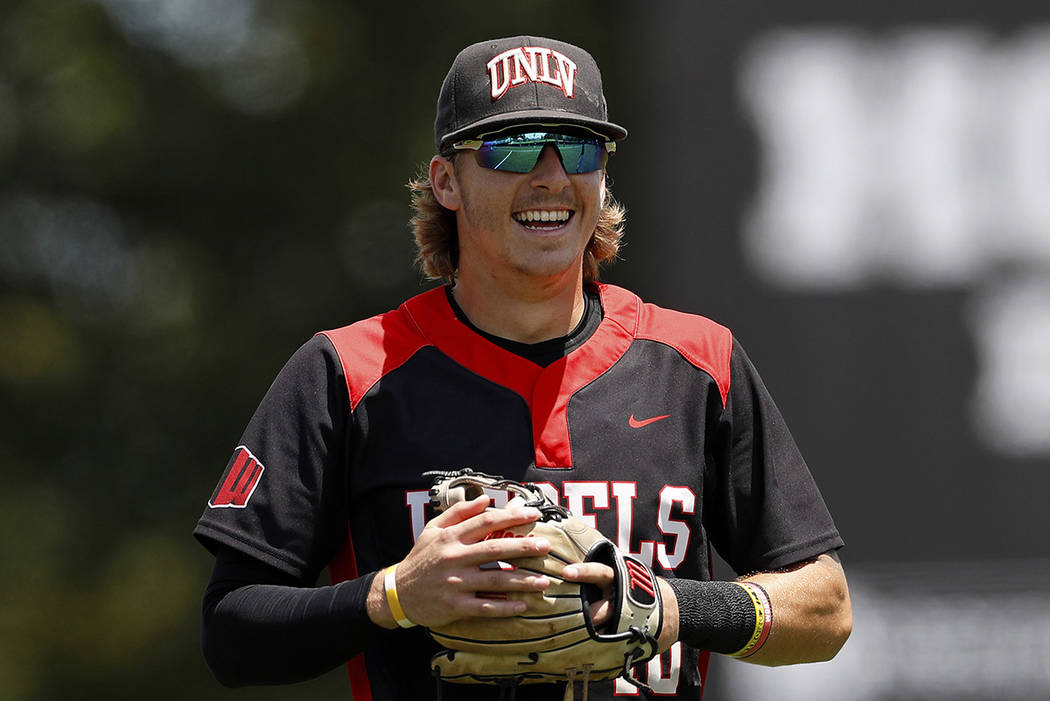 UNLV’s Bryson Stott (10) prior to an NCAA college baseball game against the University of Houston, in Houston, May 5, 2019. (Aaron M. Sprecher/AP) 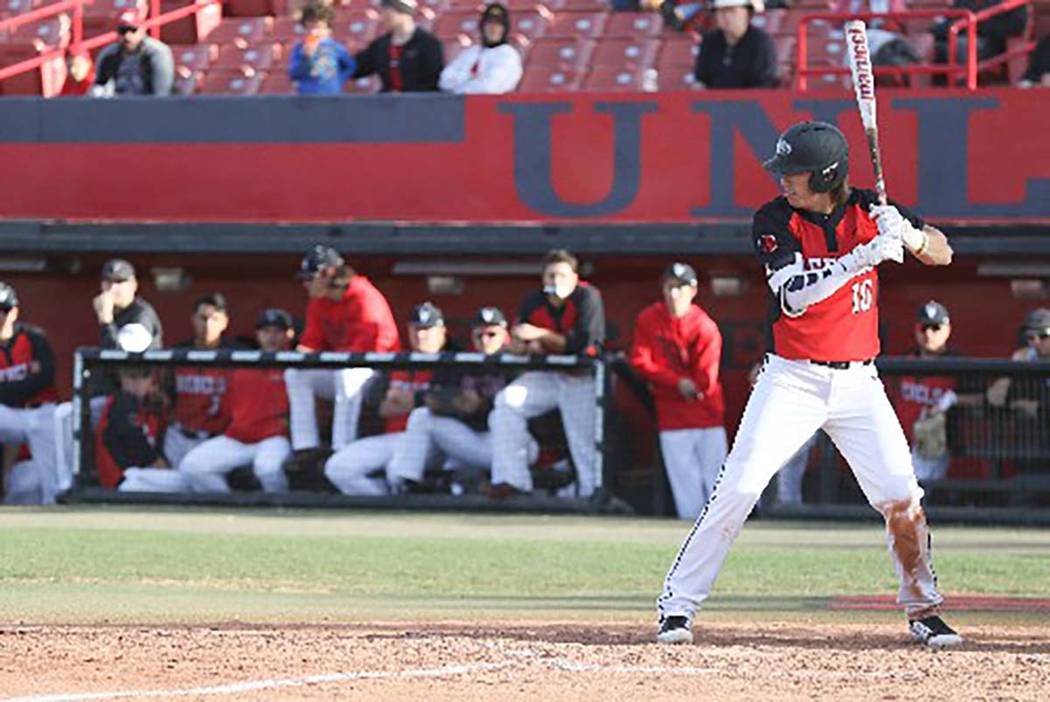 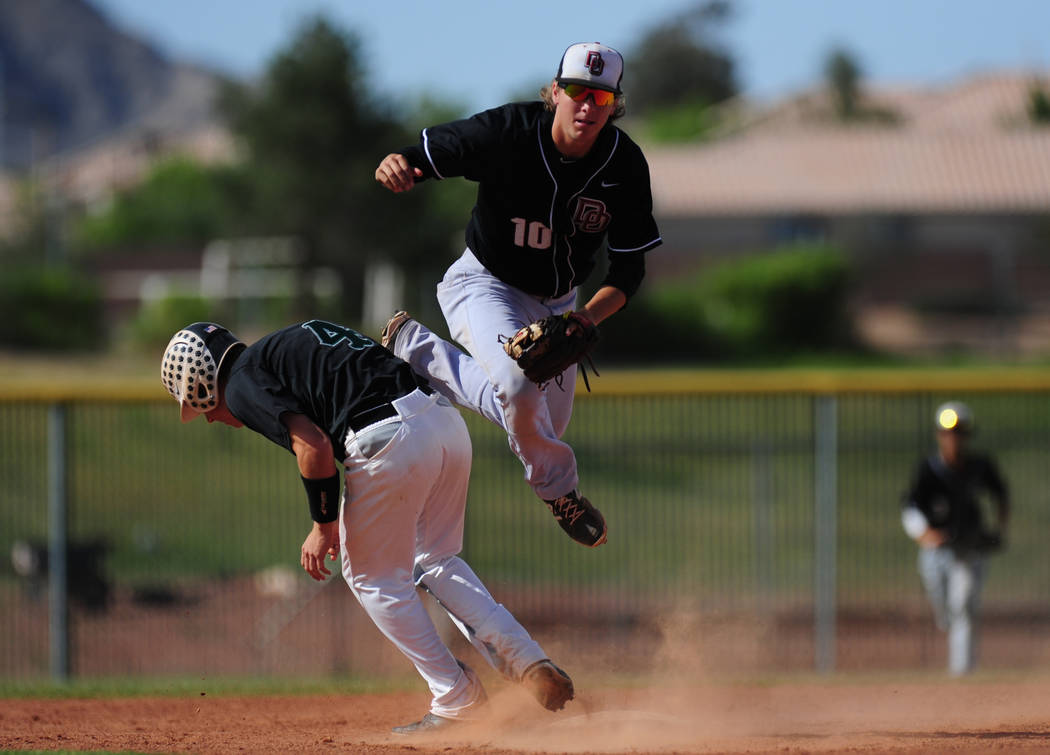 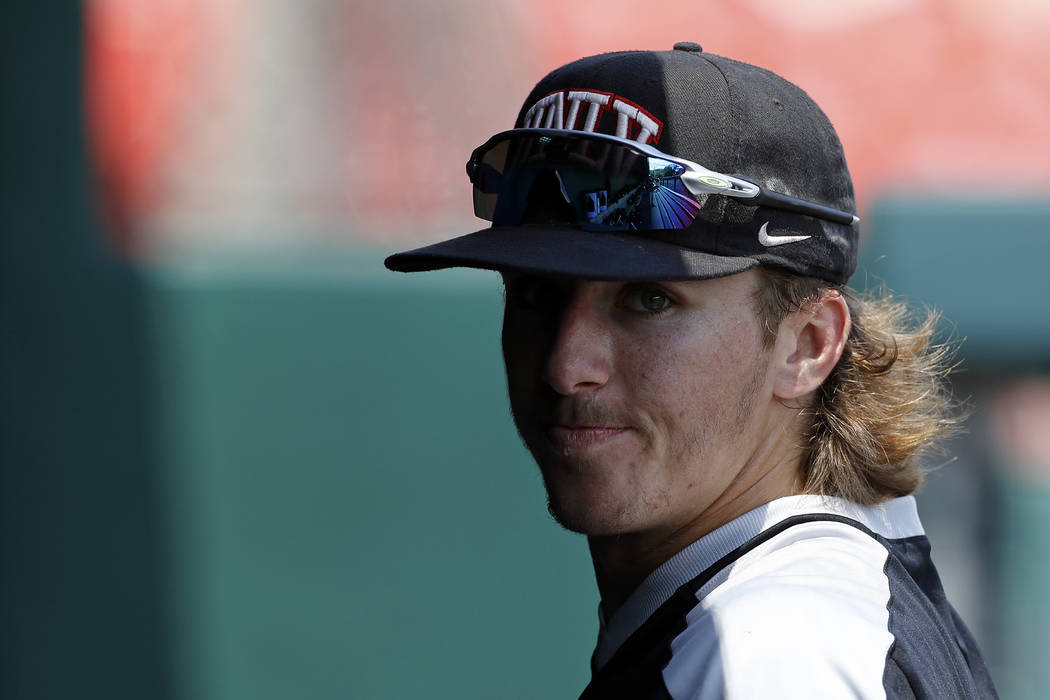 UNLV’s Bryson Stott (10) looks prior to an UNLV at University of Houston NCAA college baseball game, May 5, 2019, in Houston. (Aaron M. Sprecher/AP) 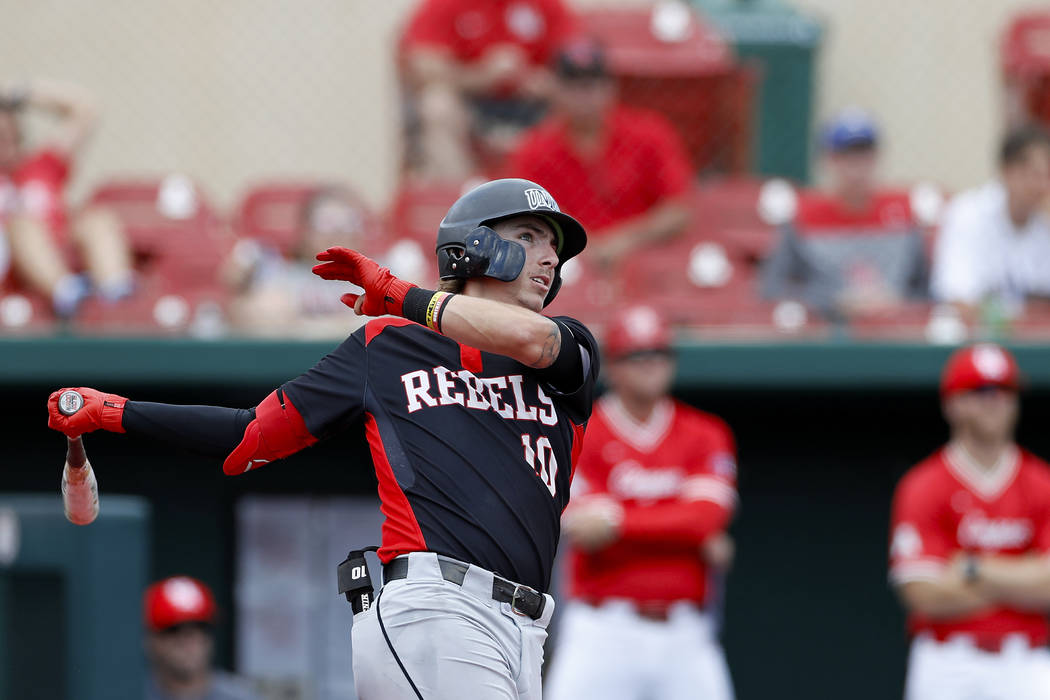 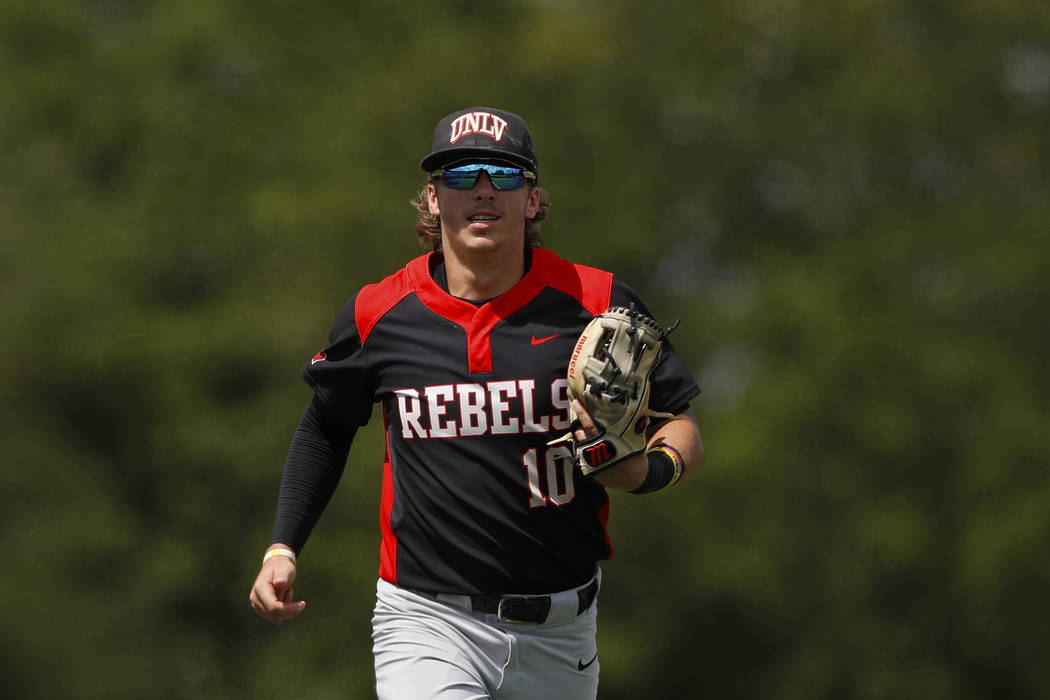 UNLV’s Bryson Stott (10) runs toward the dugout during an UNLV at University of Houston NCAA college baseball game, May 5, 2019, in Houston. (Aaron M. Sprecher/AP) 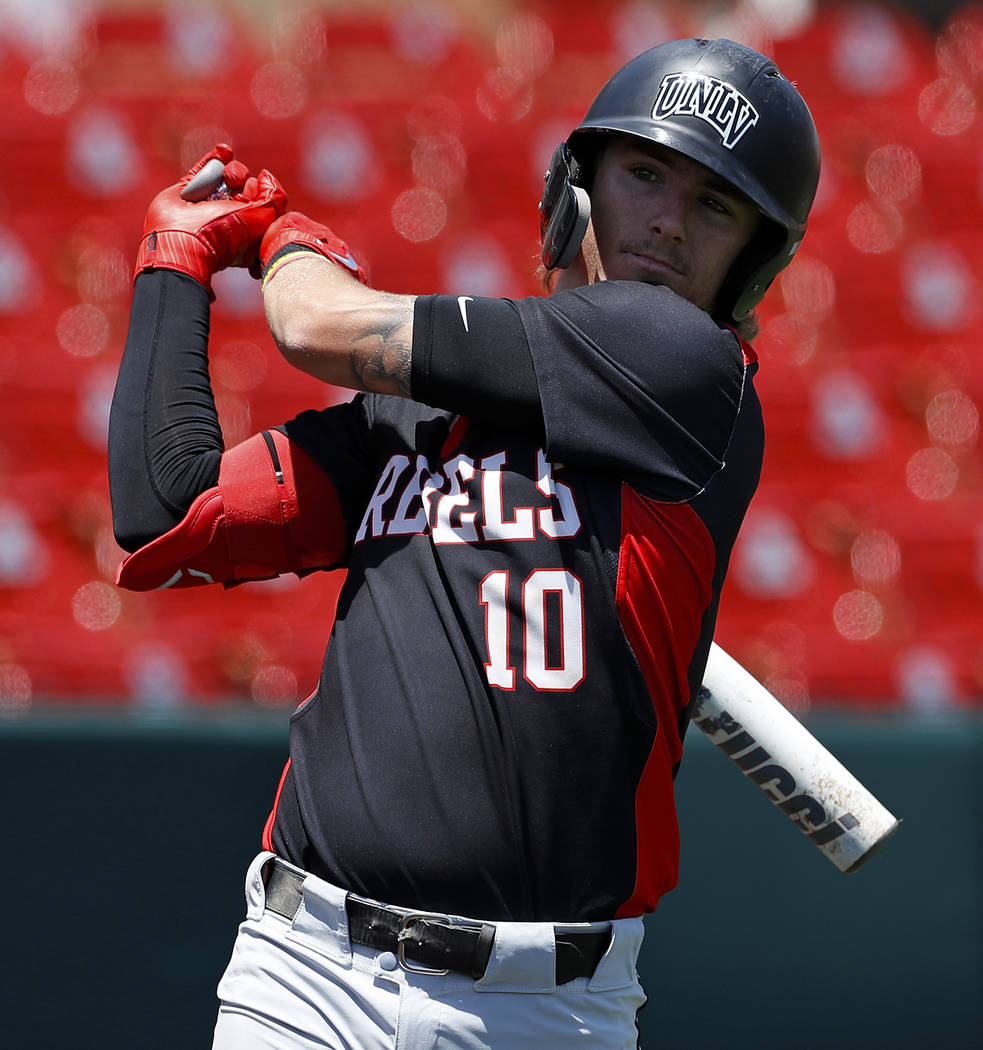 And a rich one, at that.

The Desert Oasis High School graduate and UNLV standout signed with the Philadelphia Phillies on Thursday, inking a contract for $3.9 million.

Stott, who recently completed his junior season with the Rebels, was the Phillies’ top pick and the No. 14 overall pick in the MLB draft.

Stott, who donned a Phillies uniform with No. 10 during the press conference, visited the Phillies’ locker room Thursday morning, prior to the team’s home game against the New York Mets, and talked with former Las Vegas High standout Bryce Harper.

“Just seeing all that stuff in person is pretty surreal,” Stott said. “It was a lot more than I would have expected to see in a major league clubhouse. To be there one day is obviously the goal.”

A 6-foot-3-inch, 200-pound shortstop, Stott hit .356 with 10 home runs, 36 RBIs and 61 runs for the Rebels this season. He earned second-team All-America honors from Perfect Game and third-team honors from the American Baseball Coaches Association, Baseball America and Collegiate Baseball.

Stott, who is represented by agent Scott Boras, was one of five first-round picks who remained unsigned before Thursday.

“He’s a true infielder steady, arm strength, everything you would want from a shortstop who is pretty close to the major leagues,” Boras said. “His bat is something you don’t often see from a middle infielder at the collegiate level. Who he is as a player really says a lot about what you would expect a Philadelphia shortstop to be.”

“We’ll take our time, make sure he’s ready to roll,” Minniti said. “We’ll get him to Florida tomorrow and then go from there. These guys dictate their own path. Whatever he does, we’ll move him accordingly. At the end of the day, every guy has a different timeline. I don’t want to put any sort of timeline on him.”

The Phillies have Class A affiliates in Clearwater; Lakewood, New Jersey; and a short-season team in Williamsport, Pennsylvania. They also have two Rookie League teams also in Clearwater.

“I’m just going to get better every day and see where it goes from there,” Stott said.