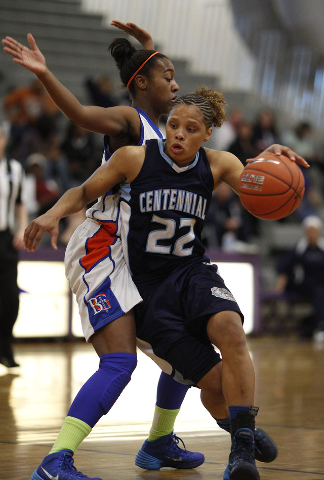 The Bulldogs won six large-school championships in a 10-year span that ended with the 2010-11 season.

But in each of the past two seasons, Reno High ended Centennial’s chance to add to its glory. The Bulldogs (24-5) will get a shot at revenge at 6:20 p.m. today when they face the Huskies (28-1) in a Division I state semifinal at UNR’s Lawlor Events Center.

“Every year is a new year, and you have different team dynamics,” Centennial coach Karen Weitz said. “We’re definitely going to go up there and compete.”

“We haven’t played as a team when we’ve come against them,” Centennial senior guard Paige Barber said. “We just need to play like we know how to and how we practice every day.”

The Bulldogs and Huskies are familiar with each other. They met twice last year, and Reno competed in Centennial’s Las Vegas Holiday Classic tournament after Christmas. The Huskies won all six of their games in the tournament this year, including a 58-24 win over Arbor View and a 67-47 victory against Foothill.

Centennial’s tallest player is listed at 5-9.

“Everybody says we’re so mismatched because they’re bigger,” Weitz said. “We’d like to think that we pose the same problem in the opposite direction. Do people look at us and say, ‘They’re so much smaller. What are you going to do?’ We have to be physical. We know that. I’ve always had small teams. We’re going to stay scrappy.”

The Bulldogs have had plenty of practice against taller teams, including three games against Bishop Gorman, which boasts 6-2 posts and a 6-1 wing.

“Our coach has us prepared with our footwork on how to play against bigger people,” senior post Teirra Hicks said. “If we can just keep them in front of us and use our strength, it makes it harder for them to get rebounds and go back up.”

Centennial makes up for the lack of height with an aggressive defense. The Bulldogs will trap all over the floor. In the final two games of the Sunset Region tournament against Arbor View and Gorman, Centennial forced a total of 70 turnovers.

“I was always taught the game starts from the inside out, so of course we’re going to have to get some points in the paint, whether that’s layups off our defense or midrange jumpers,” Weitz said.