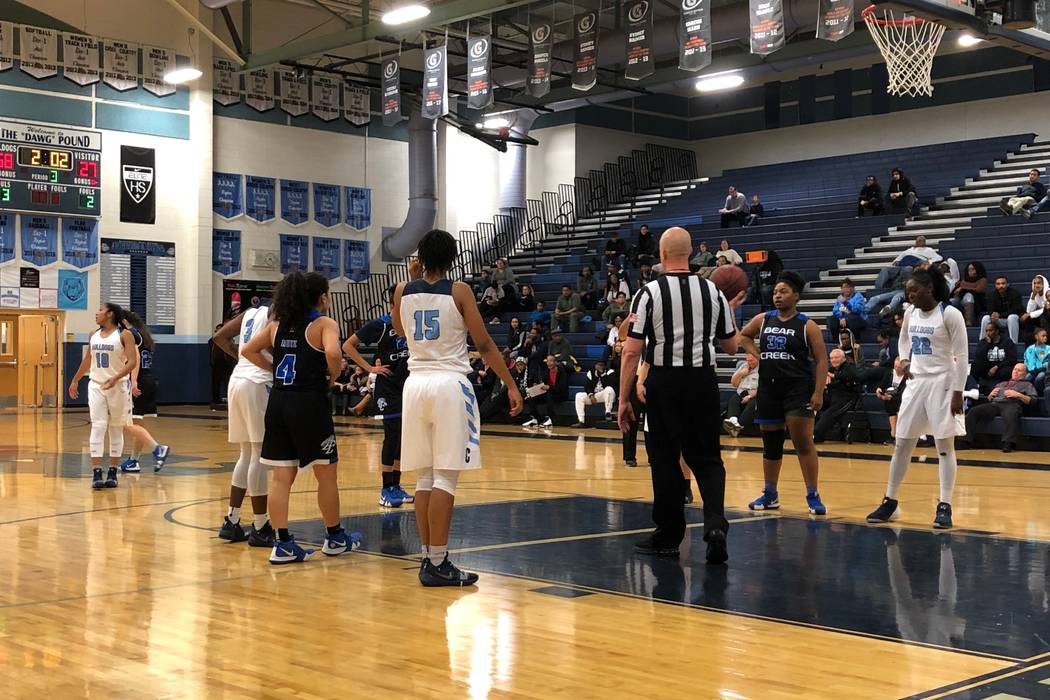 “We’re just continuing to find a group that wants to play well together and to play well for each other,” she explained. “That’s the biggest thing. We’ve got to play together.”

Such is the standard for one of the best public school programs in the country.

The host Bulldogs rolled to a 78-37 victory over the Bruins to clinch a berth in the championship game Saturday afternoon opposite West (Calif.). Eboni Walker scored a game-high 16 points to lead five players in double figures for Centennial, which overwhelmed Bear Creek with its trademark pressure defense, ball and player movement.

But Weitz has higher expectations for a group that could include Division I players.Expectations she’s yet to see.

“As long as everybody wants to believe in the system… just be patient. We’re going to put the best team out there,” she said. “That’s kind of what we talk about all the time, the culture of the program. We feel like people nowadays are getting away from it.”

Not noticeable, though, to the untrained eye.

Centennial stormed to a 27-11 lead as Weitz mixed and matched lineup combinations in an attempt to find the most cohesive unit. Walker had her moments attacking the basket. As did Taylor Bigby, Aishah Brown and Ajanhai Phoumiphat, who scored 12, 11 and 11, respectively.

Daejah Phillips added 10 points, and the Bulldogs continued to pull away from the Bruins.

And pull toward the title game.

“I tell them, ‘I can’t have someone score 30 points every night. It’s probably not going to be the same person,’” Weitz said. “We had five people in double digits. Scout that. That’s a tough scout. Who are you stopping?”

Centennial 86, Canyon Springs 49 — Aishah Brown and Melanie Isbell each had 15 points to lead five double-figure scorers as the Bulldogs rolled past the Pioneers in the quarterfinals.

Eboni Walker added 14 points, and Jade Thomas and Taylor Bigby each scored 12 for Centennial, which led 47-36 early in the third quarter before using a 20-1 run to put the game out of reach.

Foothill 57, Canyon Springs 46 — The Falcons outscored the Pioneers 14-2 in the second quarter to take control.

Maddy Beckham and Ryan Jenkins added 12 and 10 points, respectively, for the Falcons.

Skyline (Ariz.) 47, Palo Verde 37 — Sierra Martin hit four first-half 3-pointers and finished with 20 points to help the Coyotes hold off the Panthers in a consolation game.

Uriah Matus added 12 points for Skyline, which held Palo Verde scoreless for nearly 11 minutes from the late stages of the second quarter until 58 seconds into the fourth quarter and built a 43-20 lead.

Dimond (Alaska) 43, Cimarron-Memorial 29 — Alissa Pili pumped in 32 points to power the Lynx by the Spartans in a consolation game.

Young had 10 points for Cimarron.

Mountain Pointe (Ariz.) 64, Arbor View 23 — Jaida Brooks scored 23 points to power the Pride by the Aggies in a consolation game.

Page (Ariz.) 49, Palo Verde 36 — Camry Nockideneh led a balanced attack with 12 points as the Sand Devils downed the Panthers in a consolation game.