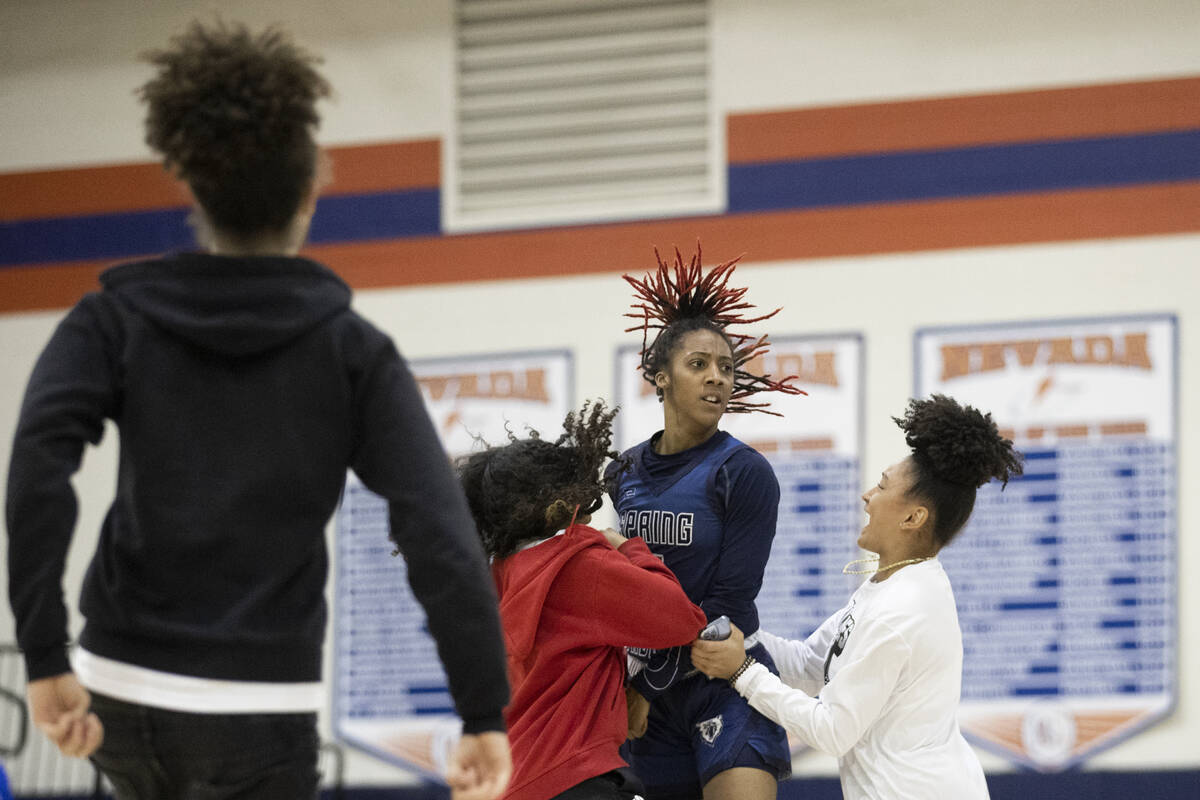 Spring Valley guard Aaliyah Gayles (3) celebrates with teammates after hitting a shot at the end of the half in the during a Class 5A Southern Region girls basketball tournament game against Bishop Gorman on Tuesday, Feb. 15, 2022, at Bishop Gorman High School, in Las Vegas. (Benjamin Hager/Las Vegas Review-Journal) @benjaminhphoto

Spring Valley suffered a 20-point loss against Liberty in the regular season.

But in Thursday’s Class 5A Southern Region girls semifinal, the No. 6-seeded Grizzlies used lessons learned from their earlier defeat to outlast the No. 2-seeded Patriots 77-75 in double overtime at Liberty.

“We learned a lot the last time,” Spring Valley coach Billy Hemberger said. “They beat us up … We slowed it down, and that’s kind of the way we’ve been playing a little bit more. But we’ve had a very young team that has learned a lot this season.”

Spring Valley (14-6) will face No. 1 seed Centennial at 2 p.m. Saturday for the 5A Southern Region championship.

Trailing 74-72 in the second overtime, Spring Valley’s Briana Green tied the game with a layup. On the ensuing Spring Valley possession, Mia Ervin scored the final two of her game-high 18 points on a driving layup that put the Grizzlies ahead 76-74.

After both teams went 1 of 2 at the free-throw line, Liberty’s Taylor Etopio was denied on her layup attempt on the final possession, giving Spring Valley the victory.

“We’ve dealt with a lot of adversity this entire season,” Hemberger said. “And this game is fitting of what we’ve had to go through. They are battle-tested, they are fighters.”

Spring Valley led by as many as 11 points late in the third quarter. The Grizzlies had a 57-49 lead with 2:30 to play when the Patriots went on a 10-0 run in a two-minute span, aided by three Grizzlies turnovers in the final minute of regulation, to erase the deficit.

Liberty’s Jaden Newman hit a 3-pointer after the first Spring Valley turnover to tie the game 57-57.

The Patriots took the lead when Ali’a Matavao converted on a layup on an inbound pass. On Spring Valley’s final possession of regulation, Aaliyah Gayles drove to the basket and made a layup that sent the game into overtime tied 59-59.

In the first overtime, Spring Valley jumped to a 67-61 lead, but Gayles fouled out and Liberty erased the deficit to force a second overtime.

Without its main ballhandler for the second overtime, Hemberger was pleased with how his young team answered in the final four minutes to outlast the Patriots.

“Next man up, when Aalyiah fouled out in that first overtime, then it was people ready to just handle the basketball and step up and play a great game,” Hemberger said.

Isabella Jaramillo and Adrienne Puletasi led Liberty (18-2) with 18 points each.