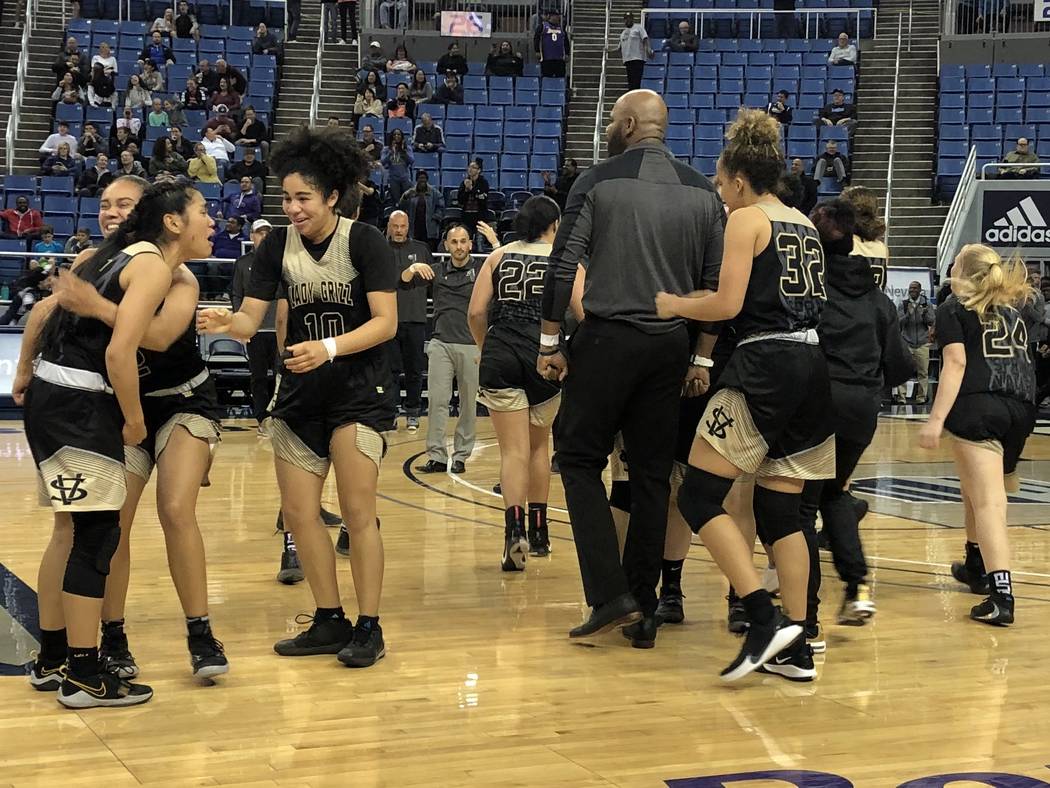 Spring Valley celebrates its 39-37 win over Bishop Manogue in the quarterfinals of the Class 4A state quarterfinals on Wednesday after Garrisen Freeman (32) made a 3-pointer with one second left at Lawlor Events Center in Reno. (Jason Orts / Las Vegas Review-Journal)

RENO — After Spring Valley edged Faith Lutheran by one point Friday to open the Class 4A girls basketball state tournament, coach Billy Hemberger said he didn’t care how his team wins as long as it finds a way.

His team put those words to the test Wednesday in the quarterfinals.

Garrisen Freeman dribbled the length of the floor and banked in a running 3-pointer with one second remaining, the decisive blow in a 39-37 win over Bishop Manogue at Lawlor Events Center.

“That’s not at all what I meant,” Hemberger said. “I didn’t mean (what I said Friday) like that at all. But we’ll take it. We advance, and that’s all that matters.”

The Grizzlies move on to face Centennial, the five-time defending state champion, at 3 p.m. Thursday in the semifinals.

Riahana Davis scored 11 points to lead the Grizzlies, who struggled with offensive consistency.

“She’s been huge for us all year,” Hemberger said of Davis. “The thing about her is she’s a fighter. She did that today, and we kept constantly saying get (Davis) the ball. We finally did in the second half.”

After an offensive foul against Spring Valley, Manogue ran about 40 seconds off the clock before Kenna Holt was fouled.

Freeman took advantage, setting off a wild celebration for the Grizzlies.

“I was telling them to keep composure because it’s not over until the buzzer sounds,” Freeman said. “We just kept playing, and in those final minutes we just had to keep working to get the win.”

For the Miners, Holt finished with 14 points and Jordyn Jensen added 11.

Incline will meet White Pine for the title at 11 a.m. Thursday at Lawlor Events Center.

Sadie Soderborg had 13 points to lead the Lynx, which trailed 30-13 at halftime and was 7-for-17 from the free throw line.

■ White Pine 58, Calvary Chapel 49 — Eva Kingston scored 22 points for the Bobcats. Olivia Hendrix had 16 points and Mia Kemmler added 13 for White Pine, which outscored the Lions 21-14 in the fourth quarter to pull away.