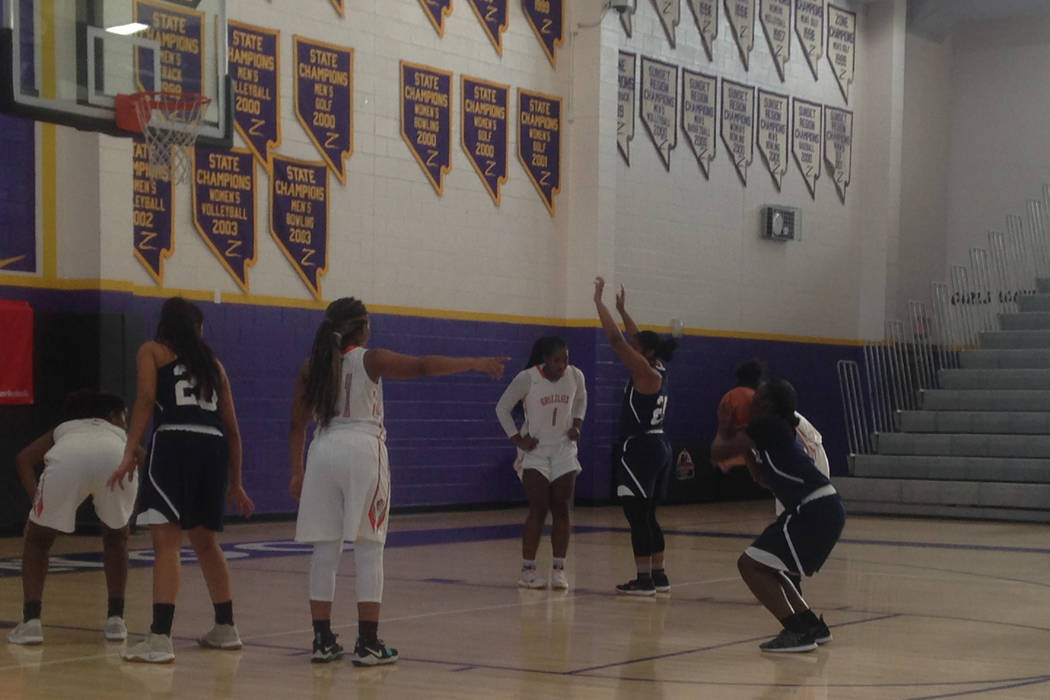 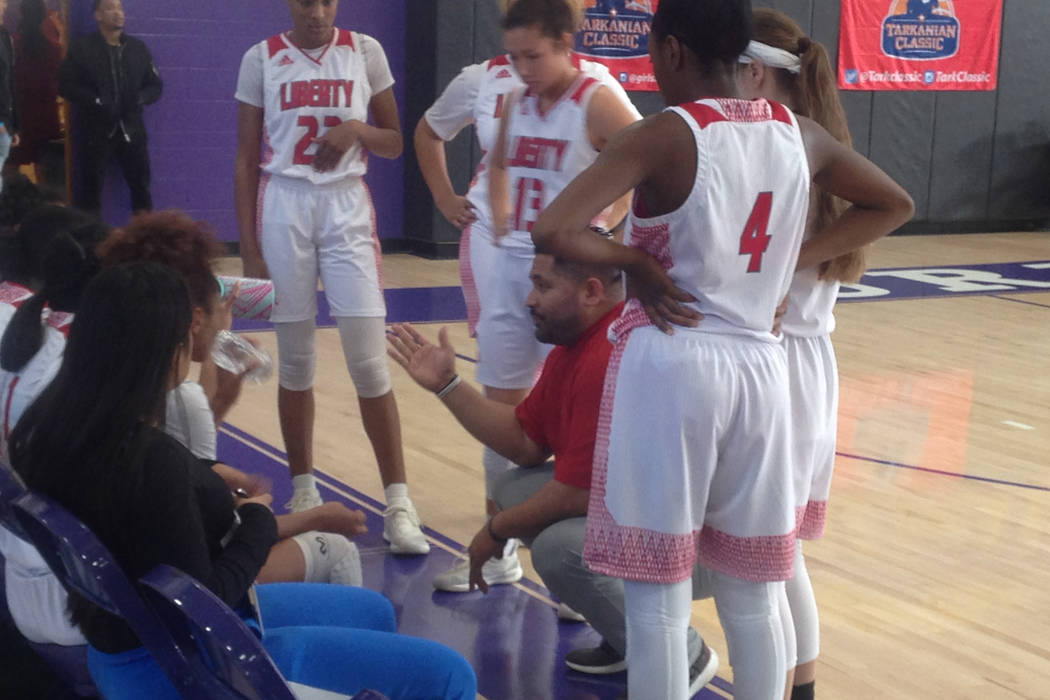 Liberty coach Chad Kapanui talks to his team during a timeout in their Ruby Division final against Century (Idaho) on Saturday, Dec. 22, 2018 at Durango High. (Bartt Davis/Las Vegas Review-Journal)

The Mustangs, seemingly out of the game with just 11 seconds left and down five points, staged a remarkable comeback before falling short in a 29-28 loss to Central (California) in the Premier Division final of the Tarkanian Classic at Durango.

Shadow Ridge trailed 29-24 before Caitlyn Covington’s jumper cut the deficit to three with 10.2 seconds to play.

A backcourt steal gave the Mustangs more hope, and Jamia Carter was fouled while making a layup with 6.5 seconds left. Carter missed the free throw, and Central called time out with 5.3 seconds to go.

The Grizzlies threw the ball away, giving Shadow Ridge a shot at the win, but Christina Thames’ 12-foot jumper fell just short at the buzzer.

Shadow Ridge led 17-9 three minutes into the second half before Central snapped a 1-for-28 string from the field with consecutive baskets by Jayla Green, sparking a 13-2 run. The Grizzlies made just two of their first 30 shots from the field, but stayed in the game by forcing 24 turnovers.

Century (Idaho) 36, Liberty 27 — At Durango, the Diamondbacks began the game on a 15-5 run and held off the Patriots in the Ruby Division final.

Chinma Njoku scored 10 of her 15 points in the second half and added nine rebounds for Century, which led 22-11 at the half and never let the Patriots cut the lead to less than seven.

The Patriots were 6-for-24 from the field in the second half.

Brea Olinda (Calif.) 51, Bishop Gorman 47 — At Durango, Stephanie Lee scored 24 points to lead the Wildcats past the Gaels in the third-place game of the Diamond Division.

Rilee Price added 11 points for Brea Olinda, which trailed 44-43 until Lee’s 3-pointer with just more than five minutes left gave her team the lead for good.

Bentleigh Hoskins and Georgia Ohiaeri each scored 15 points for Gorman.

Desert Oasis 56, Deerfield (Fla.) 26 — At Durango, Desi-Rae Young scored 19 points to lead the Diamondbacks by the Bucks in the seventh-place game of the Diamond Division.

Brianna Clark added eight points for Desert Oasis, which shot 28 of 40 from the free-throw line.

Coronado 70, Rainier Beach (Wash.) 53 — At Liberty, Sade Williams had 21 points as the Cougars took down the Vikings in the Ruby Division.

Haley Morton and Tia Thornton each scored 16 points for Coronado.

Basic 44, Las Vegas 34 — At Durango, Jasmine Richardson scored 14 of Basic’s 17 second-half points as the Wolves held off the Wildcats in a Premier Division game.

Richardson finished with 24 points for Basic, which led 27-13 at the half.

Sierra Vista 59, Cheyenne 35 — At Durango, Shania Johnson-Harper scored 12 of her 18 points in the second half to help the Mountain Lions pull away from the Desert Shields in a Premier Division game.

Ashley Hansen had 21 points, and Ayauna Scott added 13 points for Sierra Vista, which led 25-24 at the half.

Mt. Eden (Calif.) 63, Green Valley 61 — At Liberty, Mikee Lopez led all scorers with 23 points as the Monarchs topped the Gators in the Ruby Division.

Mojave 46, George Washington (Colo.) 30 — At Liberty, Jasmine Kaufman had 18 points to help lead the Rattlers over the Patriots.

Jordan (Utah) 48, Democracy Prep 33 — At Liberty, Laynee Miller had 14 points to lead the Beetdiggers over the Blue Knights in a Premier Division game.

Emily Moss added nine points for Jordan, which trailed 20-19 at the half.

Durango 2, Western 0 — At Liberty, the Trailblazers defeated the Warriors by forfeit.