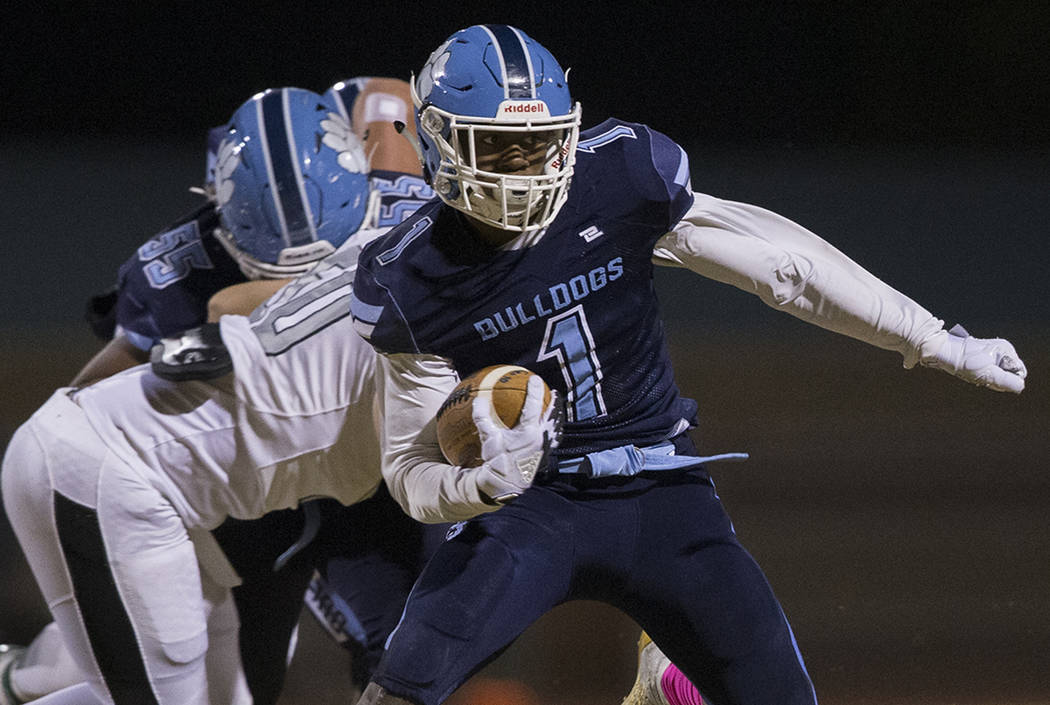 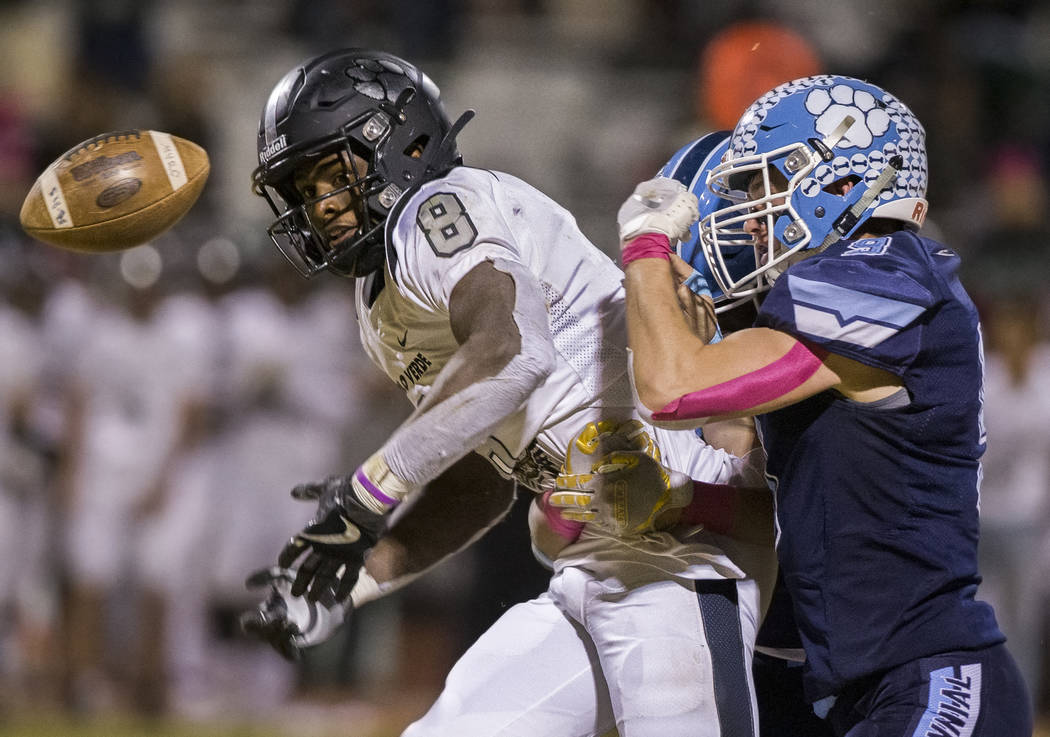 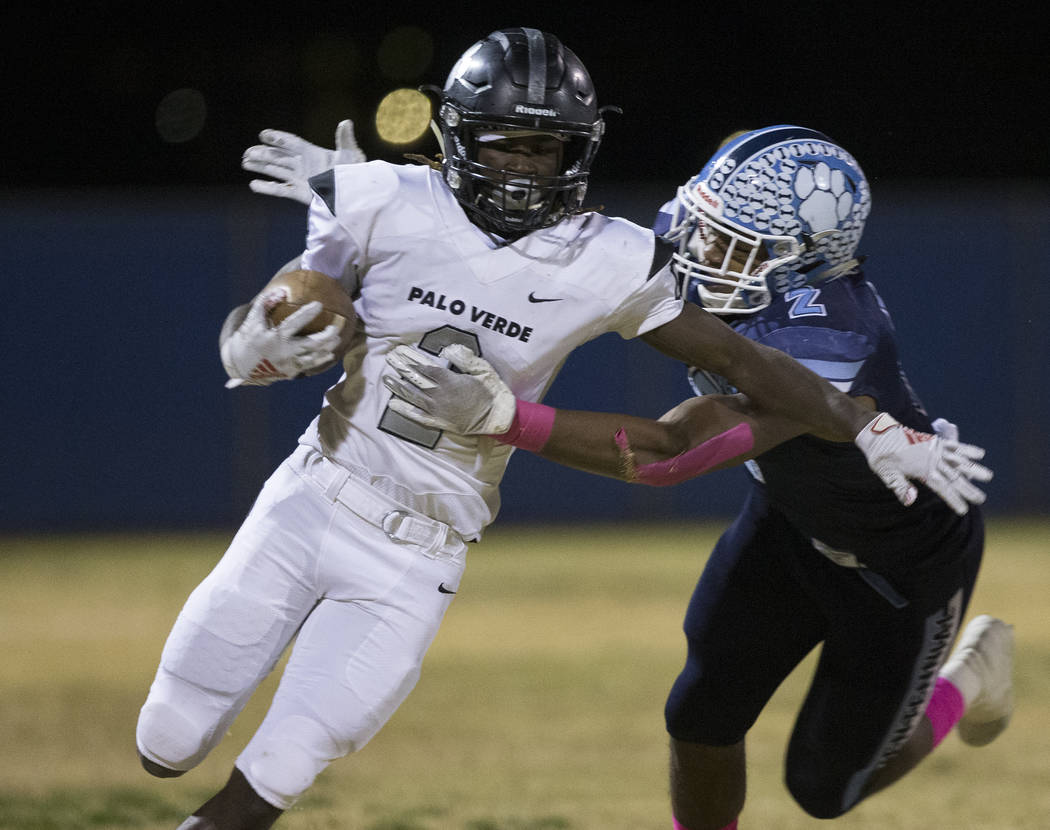 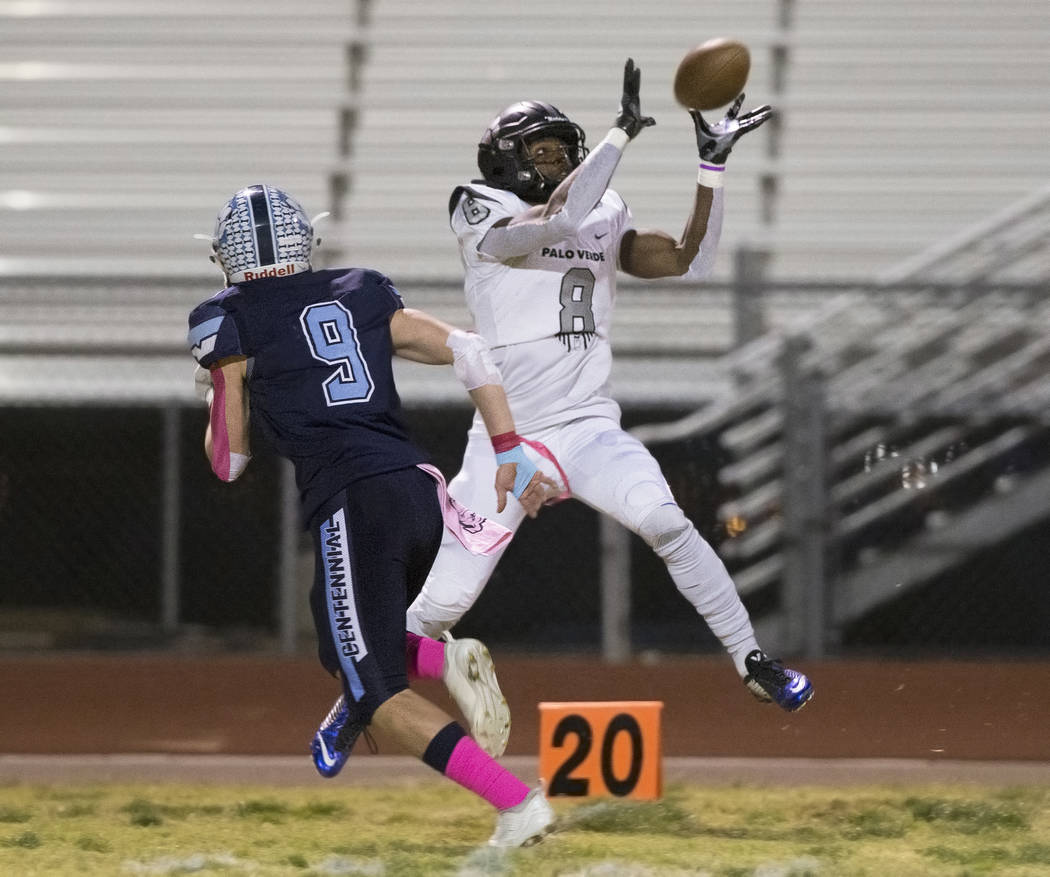 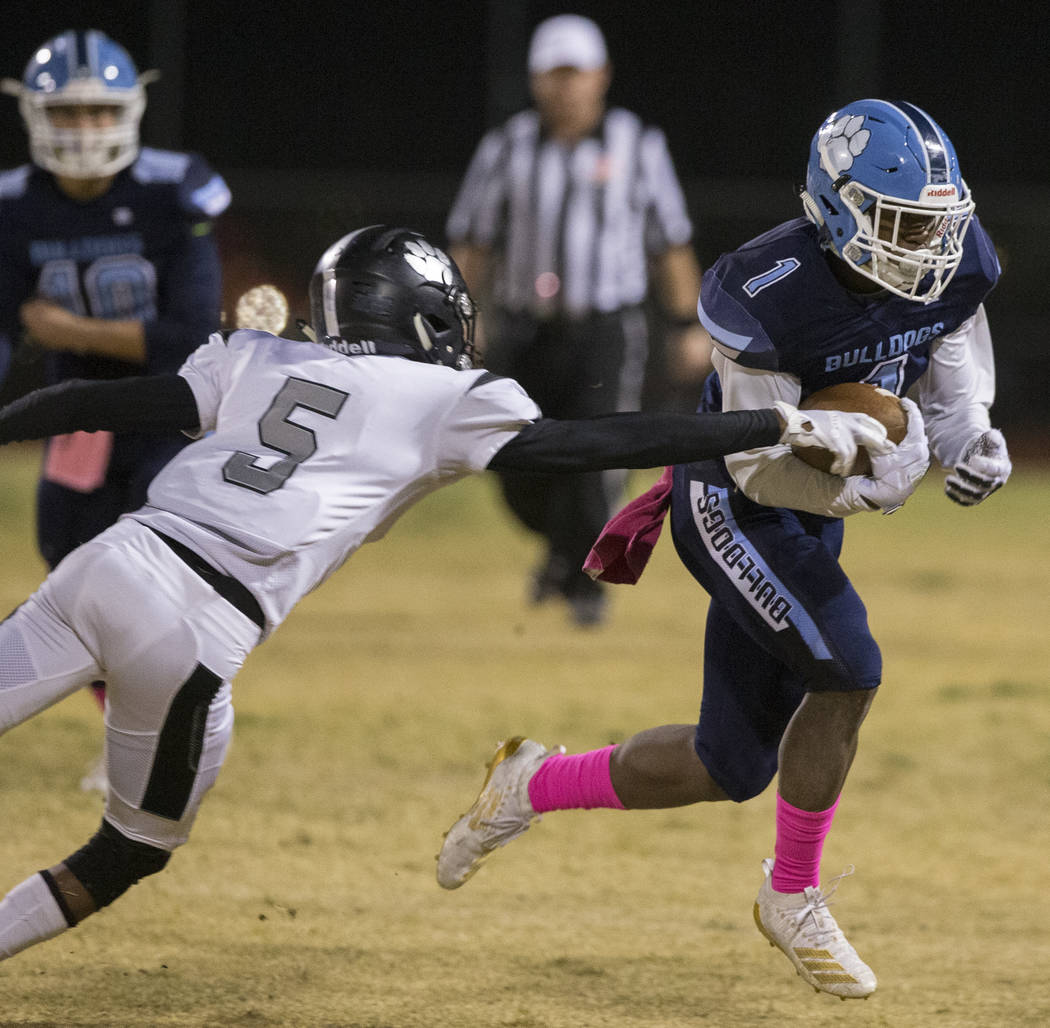 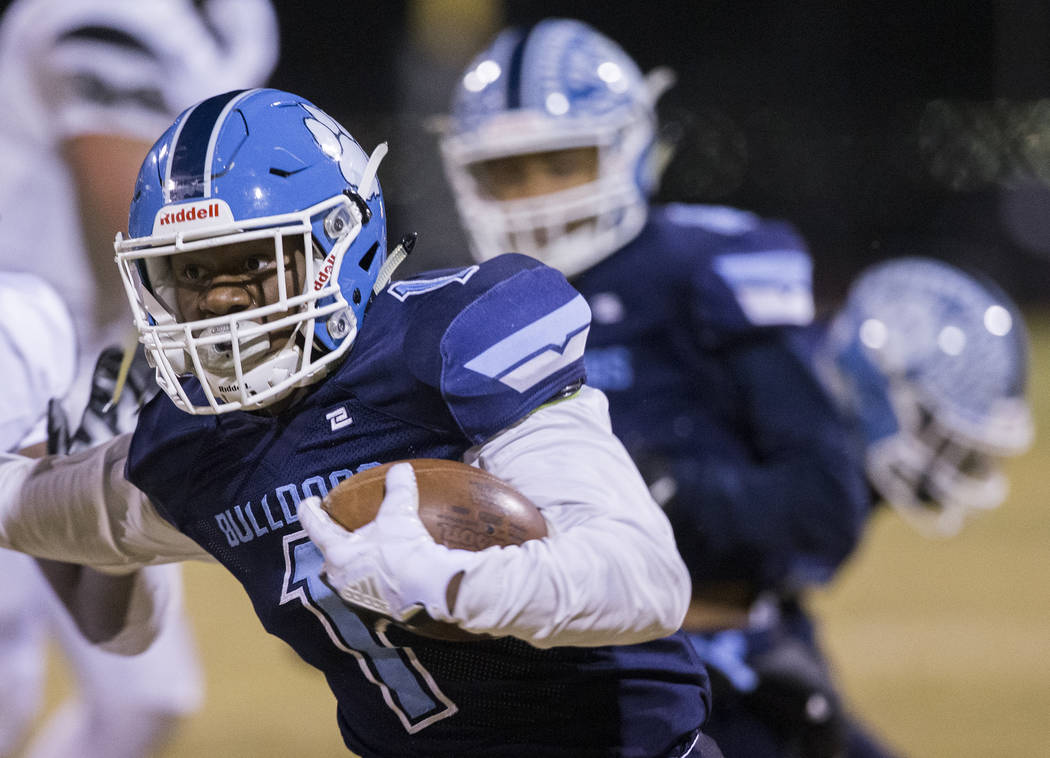 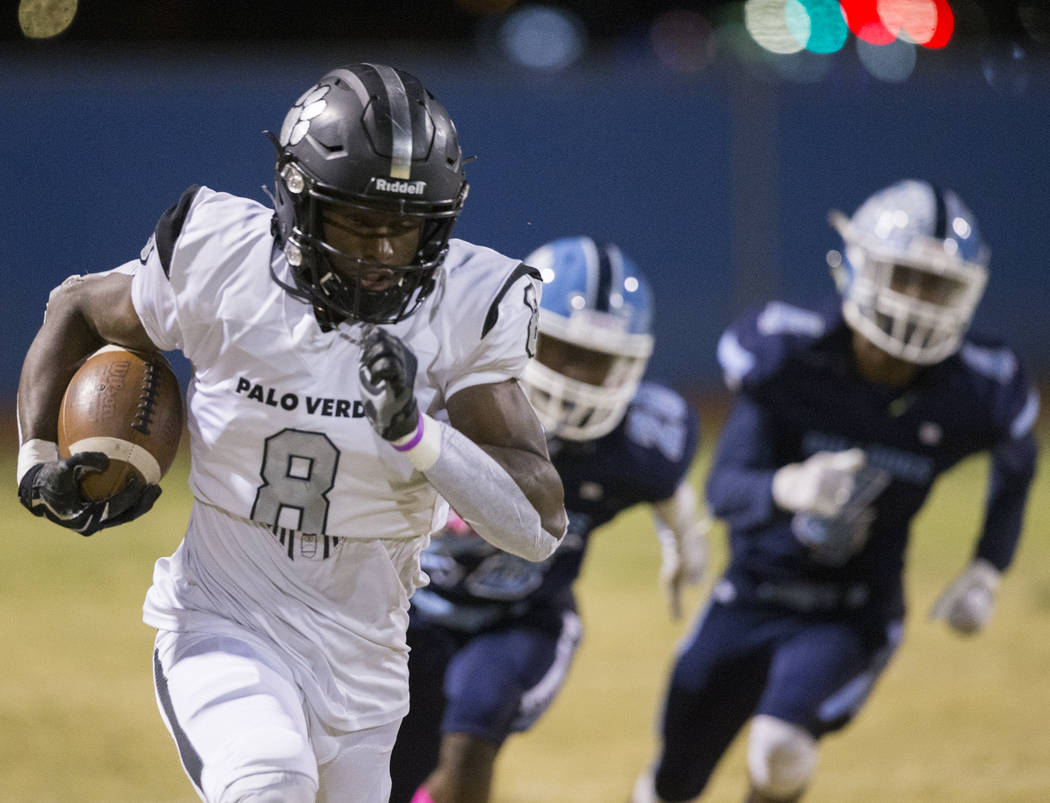 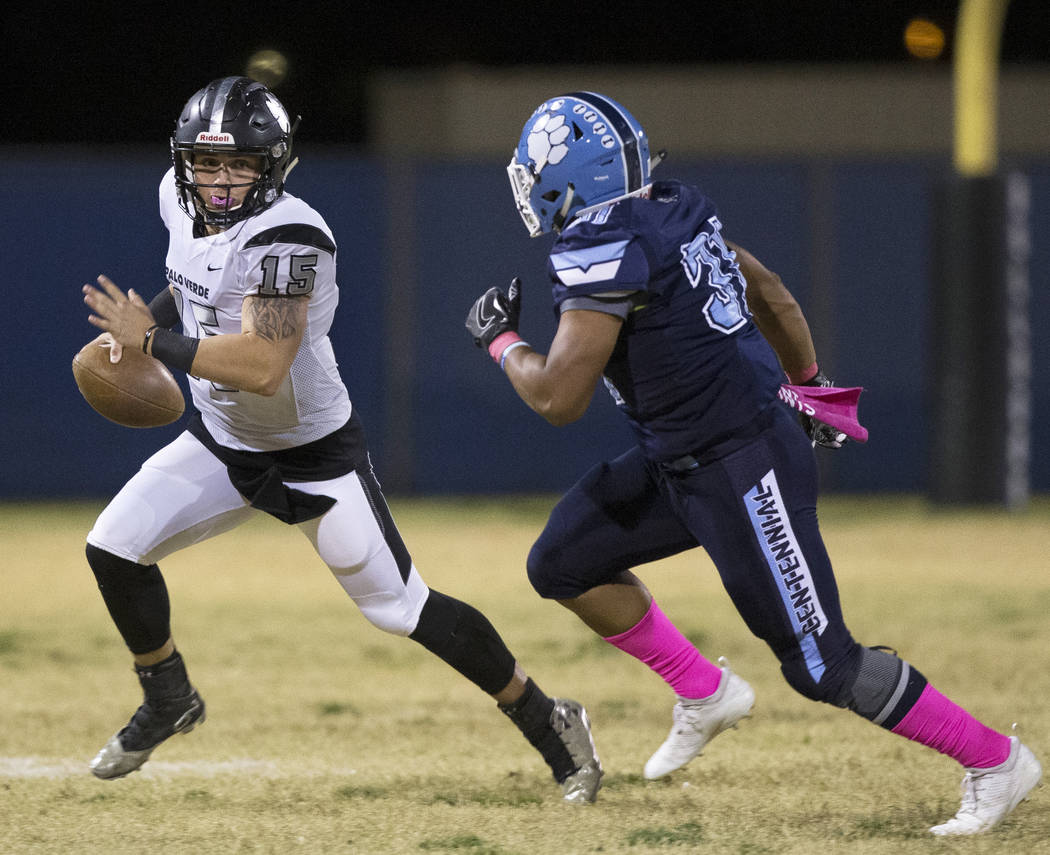 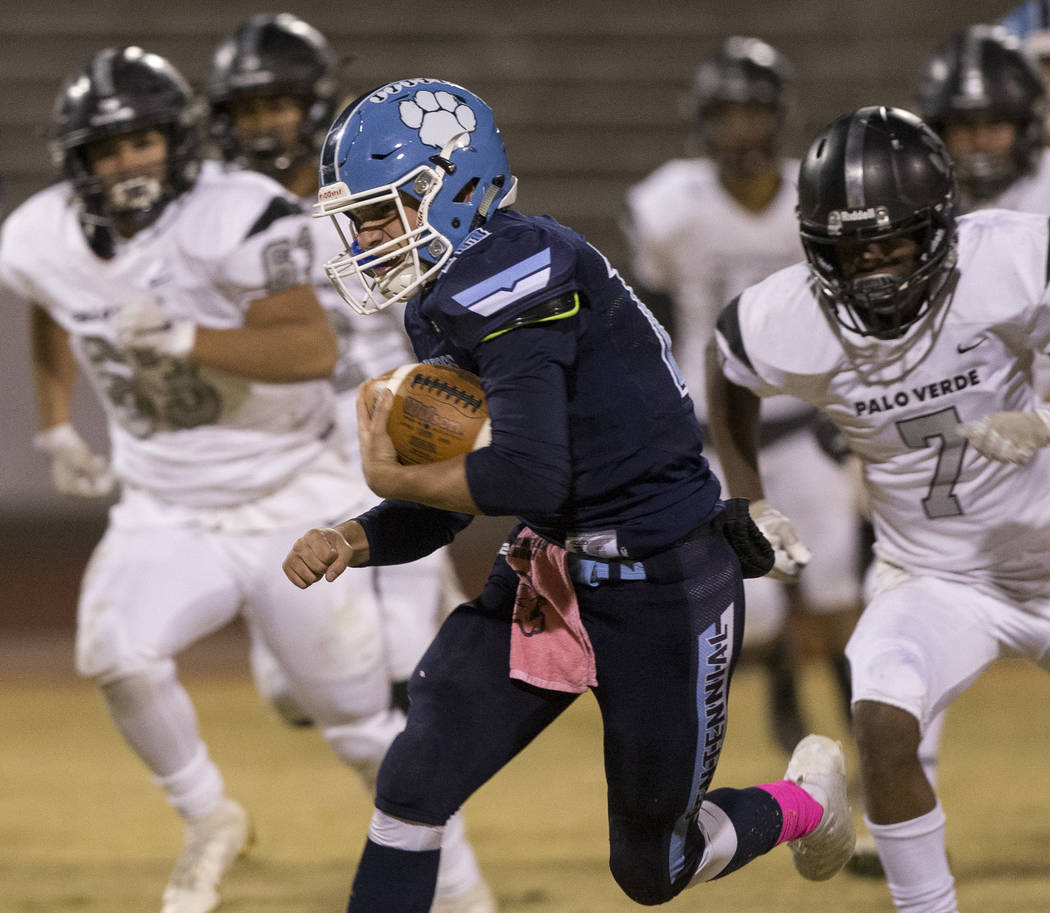 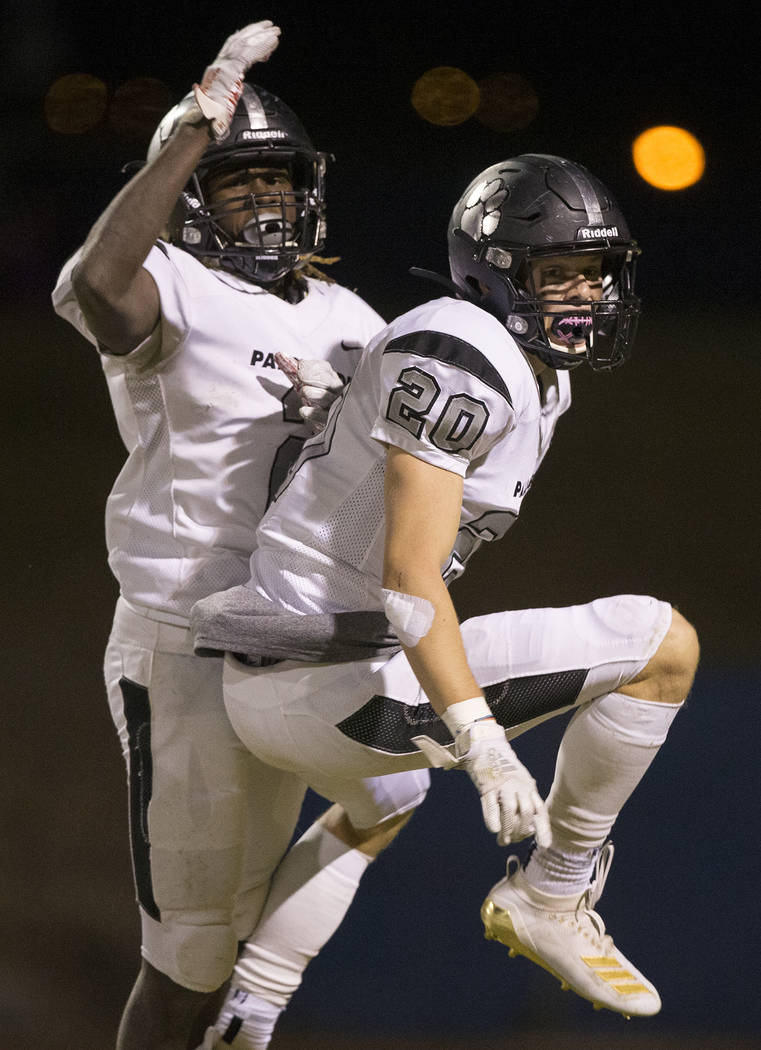 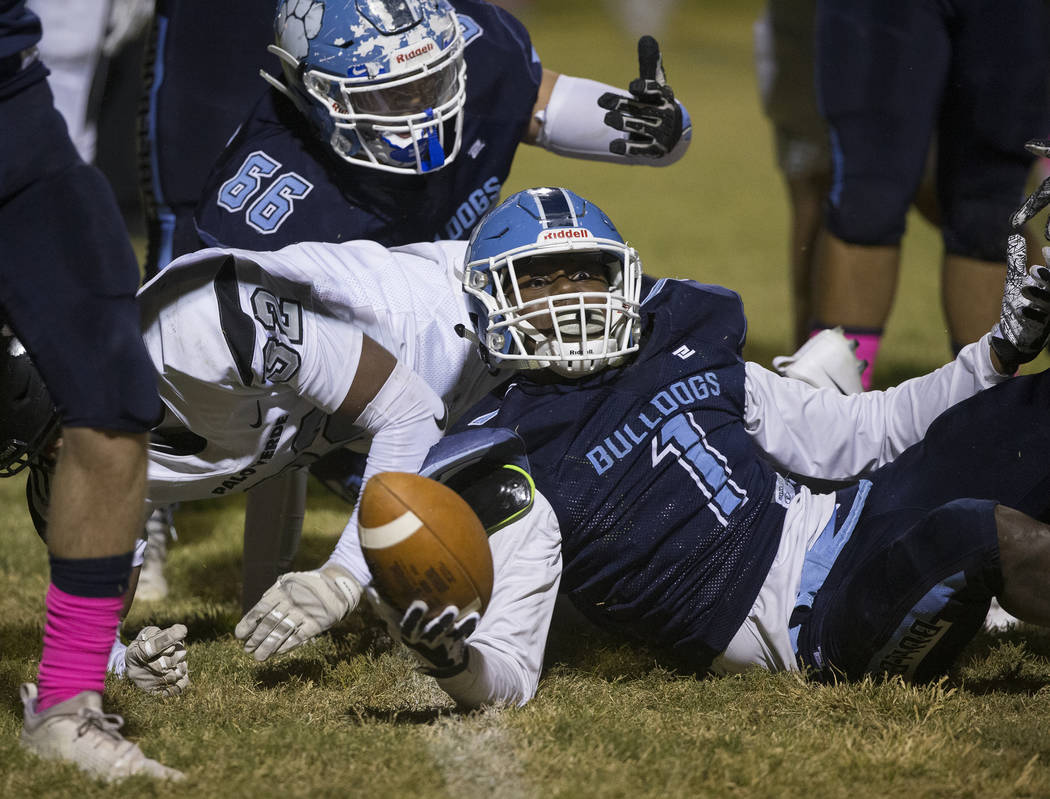 Centennial senior Jordan Smith (1) looks at the referee after Smith was called short of the goal line in the fourth quarter during the Bulldogs home game with Palo Verde on Thursday, Oct. 24, 2019, at Centennial High School, in Las Vegas. (Benjamin Hager/Las Vegas Review-Journal) @benjaminhphoto 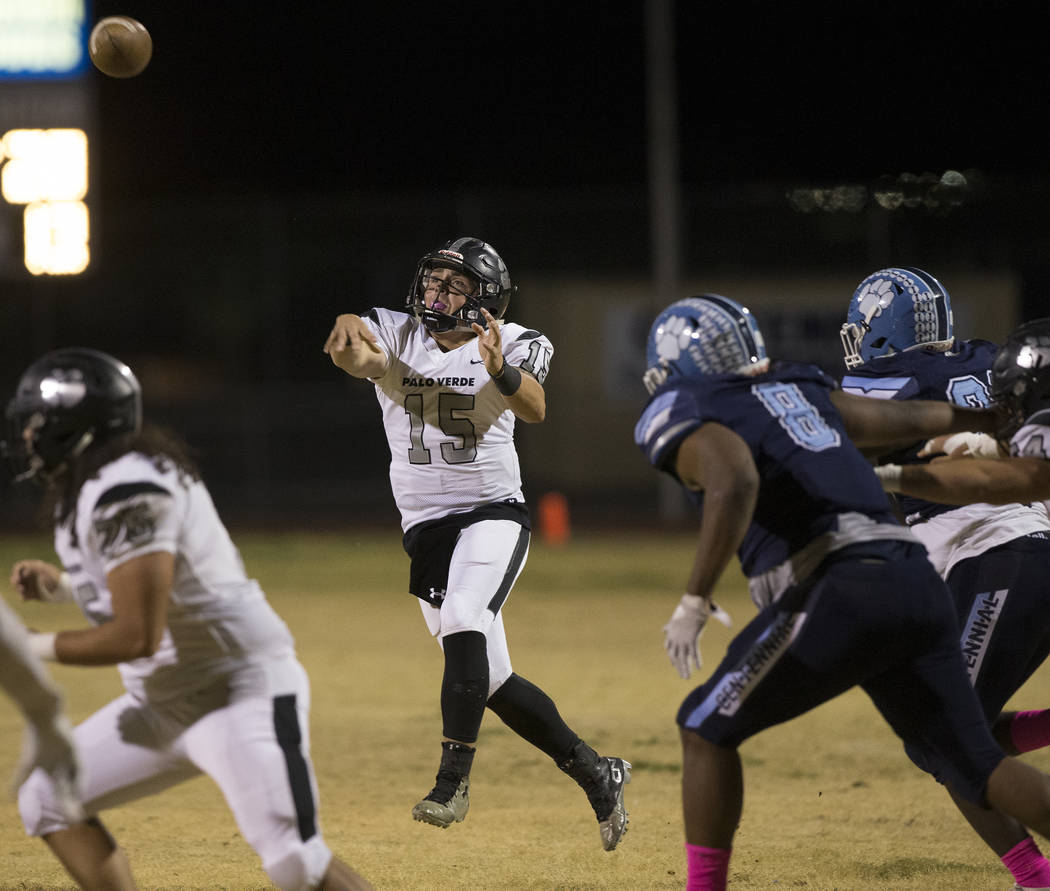 After Centennial running back Jordan Smith blew by several Palo Verde defenders, Adrian Ellis stood up near the Bulldogs’ sideline, low-fived one of their assistant coaches and said, “That boy can run.”

Smith rushed for 249 yards and scored two touchdowns, quarterback Colton Tenney threw for 233 yards and four touchdowns and Centennial rolled to a 50-36 victory over the Panthers in a critical Northwest League showdown Thursday night.

“Our offensive line, we have a meeting. We always put up on our board our goals and 200 yards was the goal,” Smith said. “Blocking was perfect and we’ve been working for this all season. I’m just glad we could come out here and put on a showcase for everybody.”

With the win, Centennial improved to 7-1 overall and 3-1 in Northwest play, while the Panthers dropped to 6-2 and 3-1.

“That’s one thing I love for Colton, as a quarterback, he doesn’t get high, he doesn’t get low — he’s a hell of a football player,” Dustin Forshee said. “That’s why I think he has a lot of success. Offensively, we don’t panic.

“And there’s a reason Jordan’s had success. Jordan’s a great, phenomenal player, but the reason he’s had a couple of 200-plus yard games and is one of the top (running backs) in the city, is because up front. We have a great offensive line coach; we’ve gotten to where we can play some physical ball. Guys up front played awesome.”

Palo Verde was no slouch, either, with its offensive attack.

Panthers quarterback Paul Myro completed 13 passes for 238 yards and one touchdown and ran for 81 yards and another score. Running back Charron Thomas led the ground game with 123 yards and a touchdown, while Ellis added a 59-yard touchdown scamper on a hook-and-ladder play. Kicker Zach Moore had field goals of 30, 42 and 45 yards.

The game was littered with big plays, as five of the touchdowns were of at least 39 yards.

With Centennial leading 16-13 heading into the second half, the fireworks began.

Palo Verde took a 20-16 lead after Myro found Luca Mauriello for a 50-yard strike to put the Panthers in scoring position, and Thomas followed with a four-yard plunge on the next play.

Centennial answered with a four-minute drive that was bolstered by two costly 15-yard penalties on the Panthers. Tenney’s eight-yard TD pass to Johnson put the Bulldogs back in front, 23-20.

After a Moore field goal cut the lead by three, the Panthers recovered an onside kick and on the next play, Myro and Mauriello hooked up for a 53-yard TD strike to give Palo Verde a 30-29 lead.

It wouldn’t last, as Centennial’s offense scored two plays later, when Tenney hit Robinson for a 39-yard score, giving the Bulldogs a 35-30 lead.

Ellis’ hook-and-ladder would be the last time Palo Verde found the end zone, though, as Tenney and Smith added two more touchdowns to ice the game for Centennial.

“We’ve had a couple of close games this year and our main focus is don’t let your head get down,” Tenney said. “It’s next-play mentality if something bad happens.”