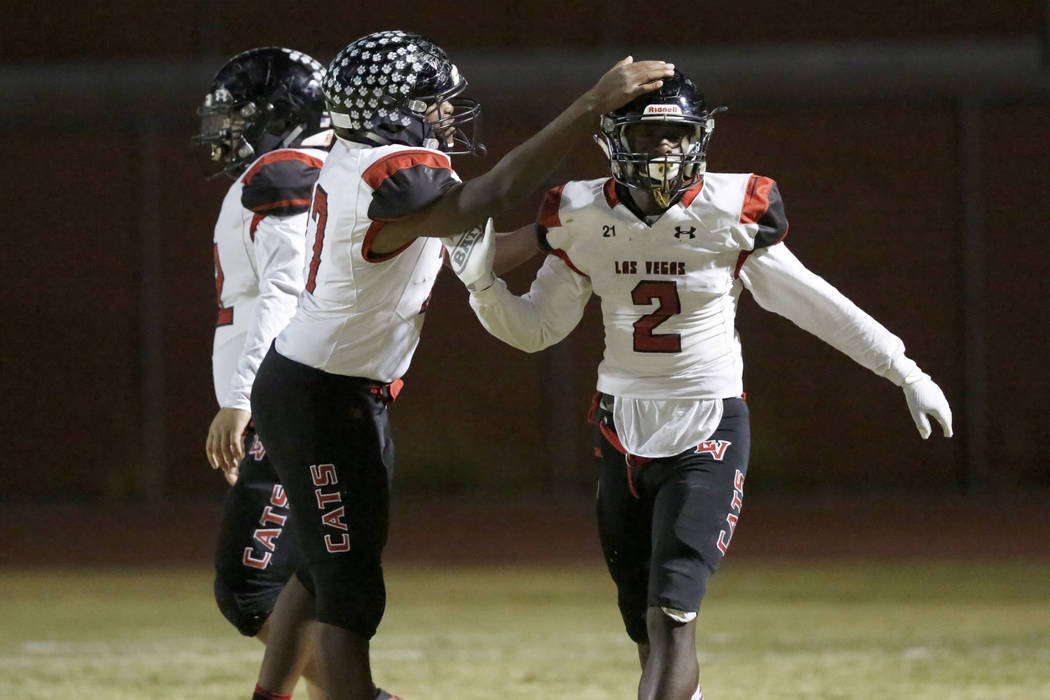 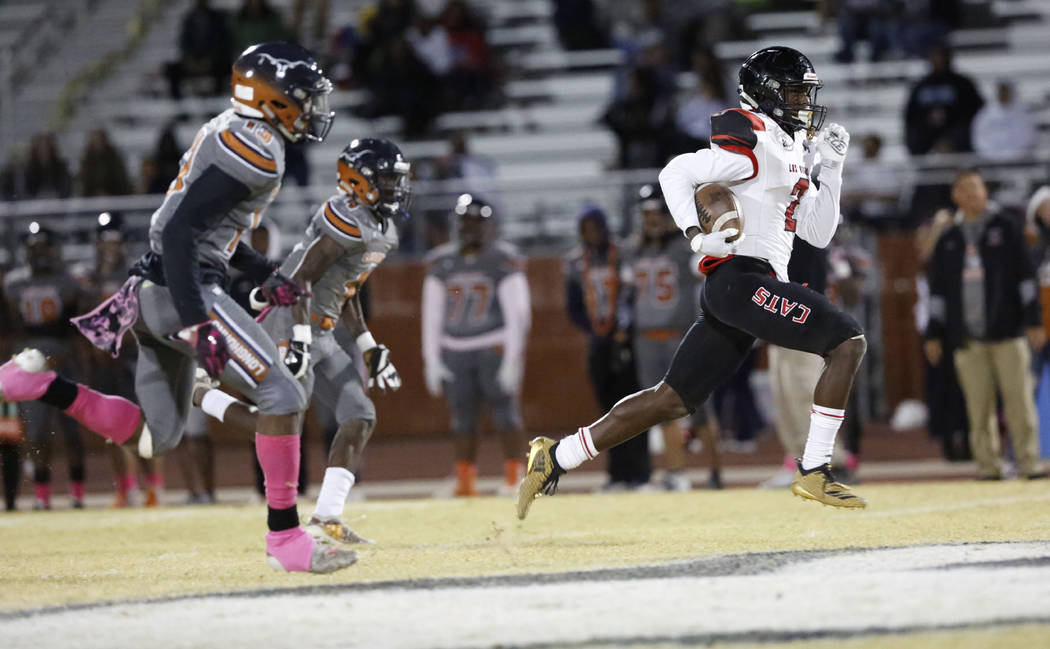 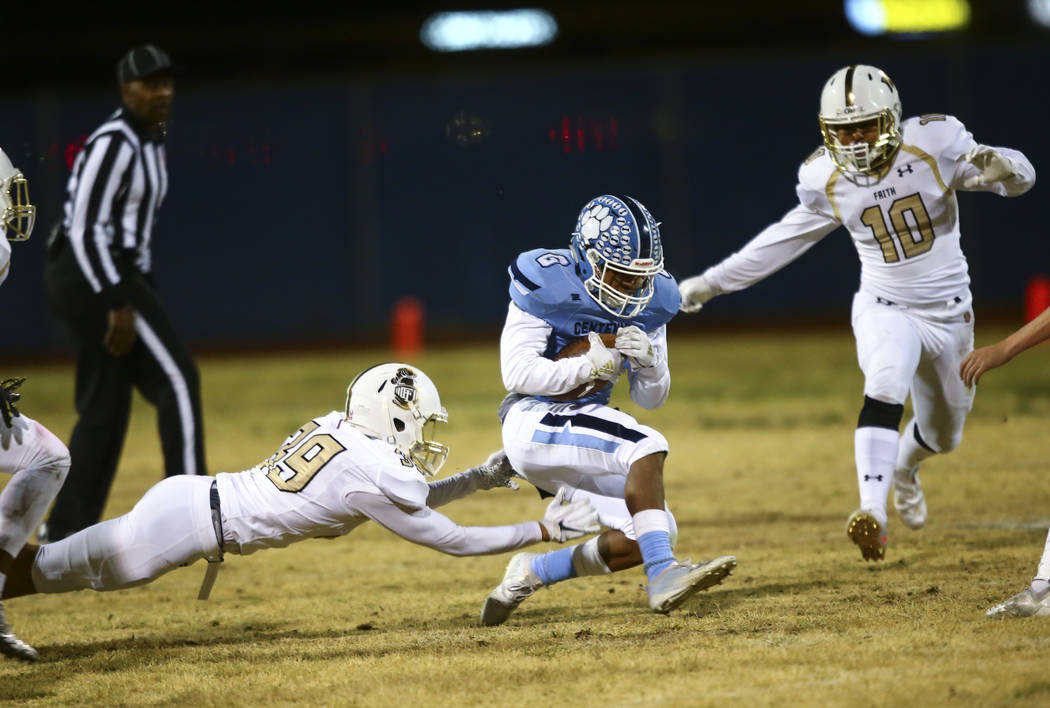 Now comes the waiting for Desert Oasis and Durango.

It was a 7-7 game early in the second quarter Friday night at Durango when an altercation broke out on the home sideline.

According to eyewitness accounts, about a dozen players were involved in some pushing and shoving, and a few players from both teams left the bench. The game was suspended, and a review is underway by the Southern Nevada Officials Association and Nevada Interscholastic Activities Association.

“We’re compiling all the film. We don’t have it all yet,” said Marc Ratner, the commissioner of officials for the SNOA. “We’re going to talk with the administrators for both schools, and we’ll get statements from both coaches and the officials. We hope to have a decision in the next two days.”

The NIAA handbook states: “If at least three members of a team participating in a game, contest or meet: leave the bench, sideline or other area that is outside the playing field or area of play and enter the playing field or area of play in response to a bench-clearing incident; or engage in a physical altercation, the team is guilty of committing an unsportsmanlike act and must incur a forfeiture or double forfeiture for the game, contest or meet.”

Since both teams had players leave the bench, the result probably will be a double forfeiture. The question then becomes whether they will be forced to forfeit next week’s game, a punishment that has been handed down for altercations in recent seasons.

Should that happen, it could be a devastating blow to two Southwest League teams with playoff aspirations.

Durango is scheduled for a road game against Bishop Gorman, and Desert Oasis has its homecoming game against Spring Valley.

If the teams have to forfeit those games, that would leave Durango at 2-3 in the Southwest League with only a home game left against Sierra Vista. Desert Oasis would be 1-3 with home games against Clark and Silverado to close out the regular season.

Cimarron-Memorial’s Branden Smith was taken off the field in an ambulance during Friday night’s game, but his coach said Saturday that the quarterback/safety is OK after suffering neck and back injuries.

Smith was injured on the final play of regulation in the Spartans’ 26-20 overtime loss to Arbor View. There was about a 25-minute delay before play resumed.

Kanie said Smith is expected to miss next week’s game against Palo Verde but should return after that.

— Las Vegas is never out of a game.

It was expected to be a shootout when Legacy welcomed Las Vegas for both teams’ Northeast League opener Friday night.

But for 3½ quarters, only the Longhorns lived up to their billing. Evan Oleas had 416 yards passing and Legacy led 35-21.

Las Vegas’ Ja’Shawn Scroggins then threw touchdown passes of 16 yards to Jaelin Gray and 78 yards on a screen to Miles Davis that tied the score. After the Wildcats intercepted Oleas at their 12, Scroggins led his team on an 88-yard drive in the final minute, capped by a game-winning 31-yard TD to Gray with 23 seconds left.

Scroggins threw for 420 yards and six touchdowns in the 42-35 victory. The Wildcats (6-0) now have doubled their win total from last season. They will host Canyon Springs on Thursday.

Centennial lost for the first time, falling to Faith Lutheran 24-20 Friday night in the Northwest League.

The Crusaders won their third straight in large part because of a defense that limited Centennial’s exceptional running game to 67 yards.

Faith Lutheran’s Riley Schwartz didn’t start at quarterback with Grant Wood back from injury, but he took over in the second half. His 31-yard TD run with 2:31 left in the third quarter gave the Crusaders the lead for good.

The win makes Faith Lutheran the league favorite, but it still plays Arbor View and Palo Verde, which is tied with the Crusaders atop the standings at 2-0. The Northwest is proving to be the valley’s most balanced league at the top.

Faith Lutheran plays at Arbor View, one of several games with playoff implications.

In the Southeast League, Foothill travels to Liberty in a game that figures to decide the title with both teams at 2-0. Green Valley heads to Chaparral, with the winner taking a step forward toward a postseason berth, while Coronado could do the same with a home win over Basic.

In the Southwest League, Clark plays at Silverado. A Silverado win clinches a playoff spot, while Clark would be in prime position for one with a victory.